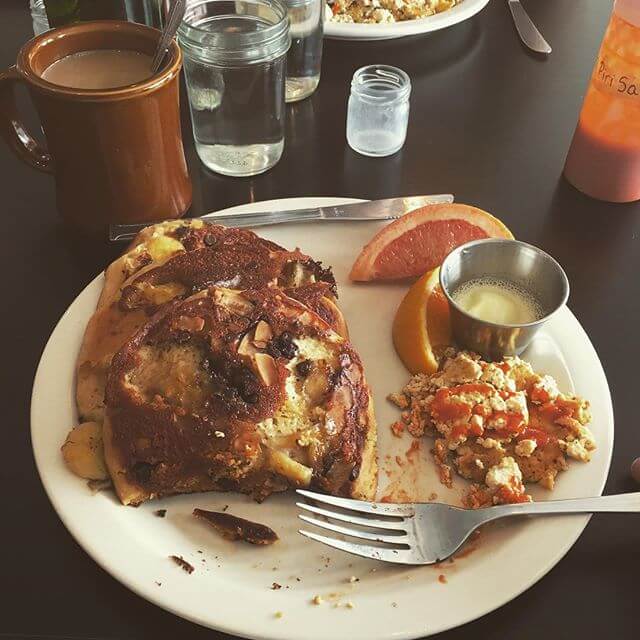 Alexa keeps eating awesome vegan foods, this one is from the new Seed to Sprout in Fair Haven.

Hey guys! So I, Jennifer, am kind-of back from my moving hiatus. Alexa has posted her favorite vegans/vegetarians post for inspiration, and helped out with the Sunday Reads from last week. Saturday I posted two weeks worth of photos for my 365 project. But I haven’t had much time for any sort of posts really. In fact this is a day late since I was so busy this weekend finishing up cleaning my old apartment. It took forever to prime the walls, clean the kitchen, bathroom, take out the air conditioner, just tons of little things. And to make it worse, we didn’t pack adequate lunches. We should of really taken a break and grab lunches, but we didn’t. So we had a bad case of the hangries, and there was shouting and crying. (oh wait the crying was because of the pain in my food)

So by 3 o’clock I was starving and dehydrated and stopped by whole foods and guzzled a cacao coconut water, moo shu burrito, and some nori sheets. It was an awesome lunch, especially when all you ate all day was a shake, a builders bar, and a very small apple. By the time I got home and unloaded the car I didn’t want to do anything. It was amazing that I even bother making dinner. (which was TJ orange chicken, green beans, and brown rice, btw) It is weird because I joked with Jon that we’ve been eating like “normal people.” We have been eating fairly simple or from frozen dinners since we have been busy with unpacking. Heck, I’ve been eating SANDWICHES with field roast deli slices, which I really liked the mushroom slices. There has been lots of protein, a grain and a veggie sort of deal going on as well. It is all so weird for me.

Anyways, I still have a big to-do list today. One being handing in my apartment keys! HORRAY! Finally done with my apartment. We stayed WAY too long in that small space. We probably wouldn’t do anything different with our apartment situation. I mean priming sucked, but we did stay in that place for three years. Yes it was dusty, yes it was small, but we probably would of been saving in a bigger newer place for a house for a longer amount of time. I am getting side tracked, here are the reads for the week. They are probably fairly fluffy since I’ve been so busy this week. But hey we all need to take a break sometimes right?

So I told my Mom to make me this side for my sister’s birthday (it was right after the move, otherwise I would be making the vegan meals) It was really delicious, and I am pretty sure it will be a staple in our house. It is easy to make and very flavorful. We left out the feta, though you could make a vegan feta to put in it.

Now that I am closer to Trader Joes, I might be able to get cheap freeze dried strawberries and make these yummy energy balls.

Only Emily could get away talking about her mensural cycle in a sponsored post. And man, do I want to make this ice cream cake. (too bad I have like 4 different kinds of ice cream in the freezer)

Do I dare make this? I know Jon isn’t a big raspberry or cauliflower fan, but damn it, it looks so tasty! *crosses fingers that there is a good raspberry crop this year at my CSA*

If my CSA grows watermelons like they did last year, I am totally going to make this watermelon coconut ice cream.

I love this article going in depth about how carrot tops are not toxic. I never knew about it until I googled up way to use carrot greens (I mean they have to leave them there if they are edible right?) I’ve made carrot top pesto and carrot top tabbouleh with good results. So give it a try guys!

I love rice paper rolls. My husband does not. But baking them? Might be a great compromise! I saw the idea from Little Vegan Bear with the Baked Paper Rolls with Cashew Dipping Sauce. Probably nothing groundbreaking and probably has been done all over the place, but it is NEW TO ME!

Bacon seaweed? Sounds perfect for me! I never liked the fattiness of bacon, but seaweed. I’m down with that.

Not Foods- Sort of

So we moved and our kitchen is a SUPER upgrade from the last, but realistically it is still small and not full of nice equipment. They are older and lower grade, not total bottom line things. Anyways, this article from the Kitchn was nice, as it makes me appreciate all I did in my tiny (and still small kitchen) Homemade Bagels? No problem. Making cookies each week, why not? Rarely did the kitchen size stop me from making whatever I wanted.

Found this website and is making me rethink of all the landmarks near me. I should check out more of these places and appreciate them. Some I can’t believe I missed so many campy and weird places.