What I Ate Wednesday #2

I wanted to do a What I Ate Wednesday at least once a month during the pregnancy, and I am almost running out of time to do my September post! It has been a pretty busy month, so I figured it is now or never. Sadly today is a little boring in my selection of food, there are lots of leftovers and repeats. 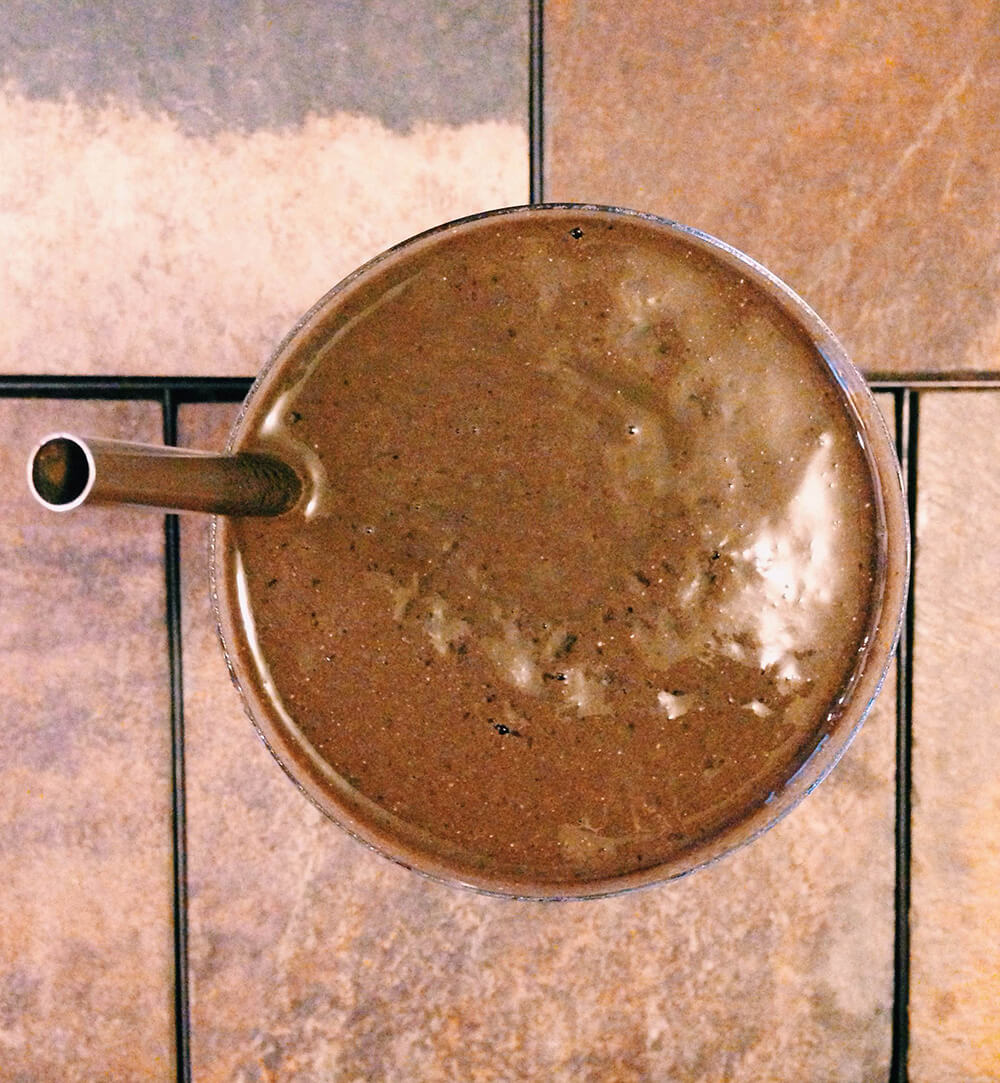 I started the day with my usual chocolate spirulina smoothie. I went back to the powdered spirulina since I found the spirulina tablets more expensive and annoyingly you need to take 6 tablets to get 1 tsp of powder. The tablets are annoying to swallow, and aren’t very pleasant to chew either. What I do like about my chocolate spirulina smoothie is that hits so many of the nutritional needs for pregnant ladies. I get about 50% of the calcium (from the greens and soymilk) and 61% of the iron (from all that cocoa and spirulina) that I need for the day. I also get about 30 grams of protein with only adding 2 tablespoons of protein powder to the whole thing. I should probably post this bad boy on the blog because I think this is a great shake.  And the greens I used today? Some beet greens and a little bit of swiss chard. 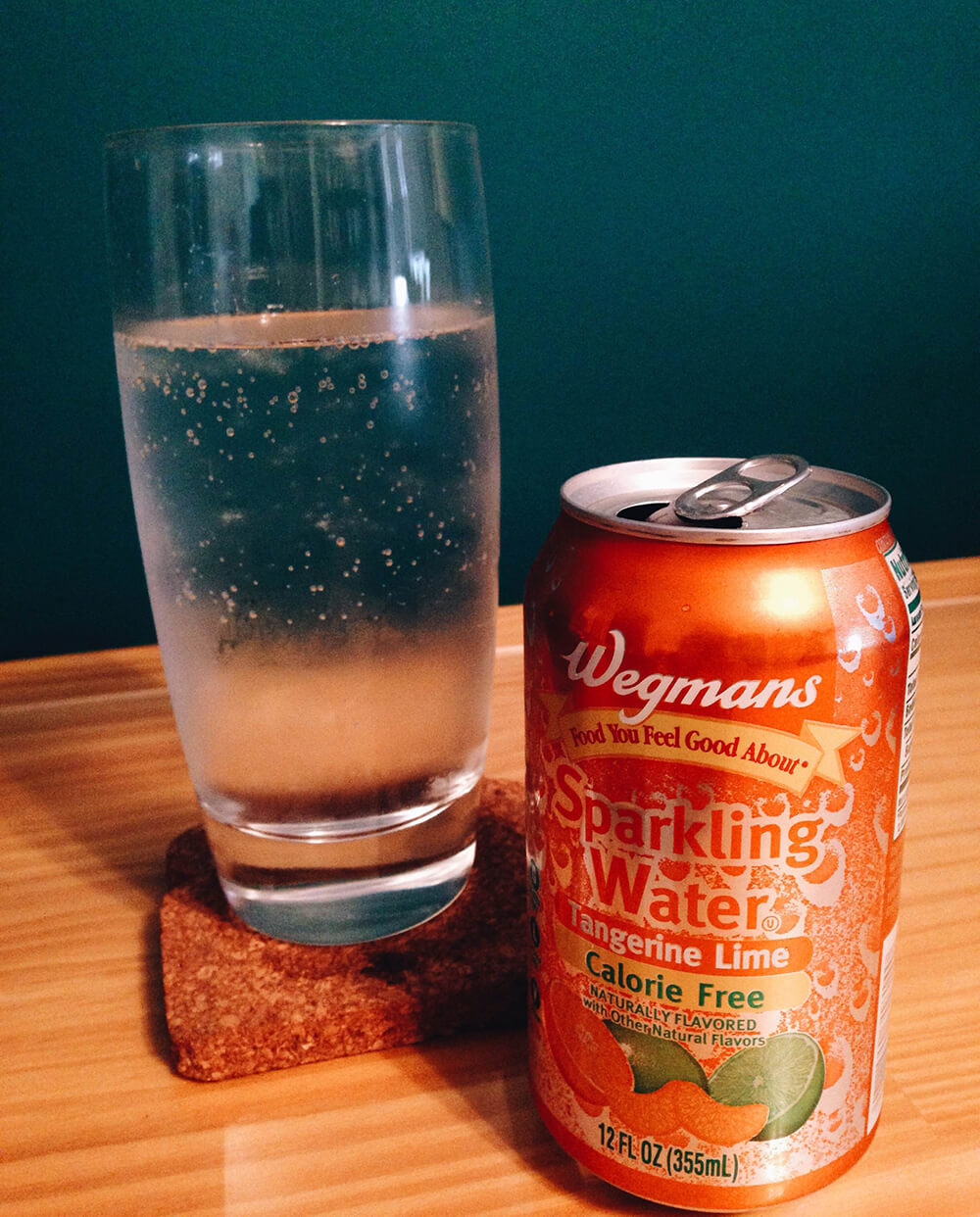 I’ve been obsessed with fizzy drink as of lately. I think it has to do with the fact that I can’t really have beer or cocktails. I’ve been getting by with non-alcoholic beers, tonic water with shrubs, and seltzers. And if I am honest I am always have a sugar-free soda at work, which I know, isn’t the best, but for awhile I was bringing my own seltzer into work. I also have been bringing in powder mix packets to mix with my water. I really like the Target brand mixers because they use both sugar AND stevia making it only 15 calories. I like how they don’t use coloring in the mixes, the drink ends up being a pale white-ish or completely clear. But they do use artificial flavors. I also really like Madhava’s powder mixes, though I usually find them a little stronger than I prefer. Just like the target ones, they use a mix of stevia and agave powder but they tend to stay away from artificial flavors. But I think I mainly wanted to show my wonderful new wall color ^__~ 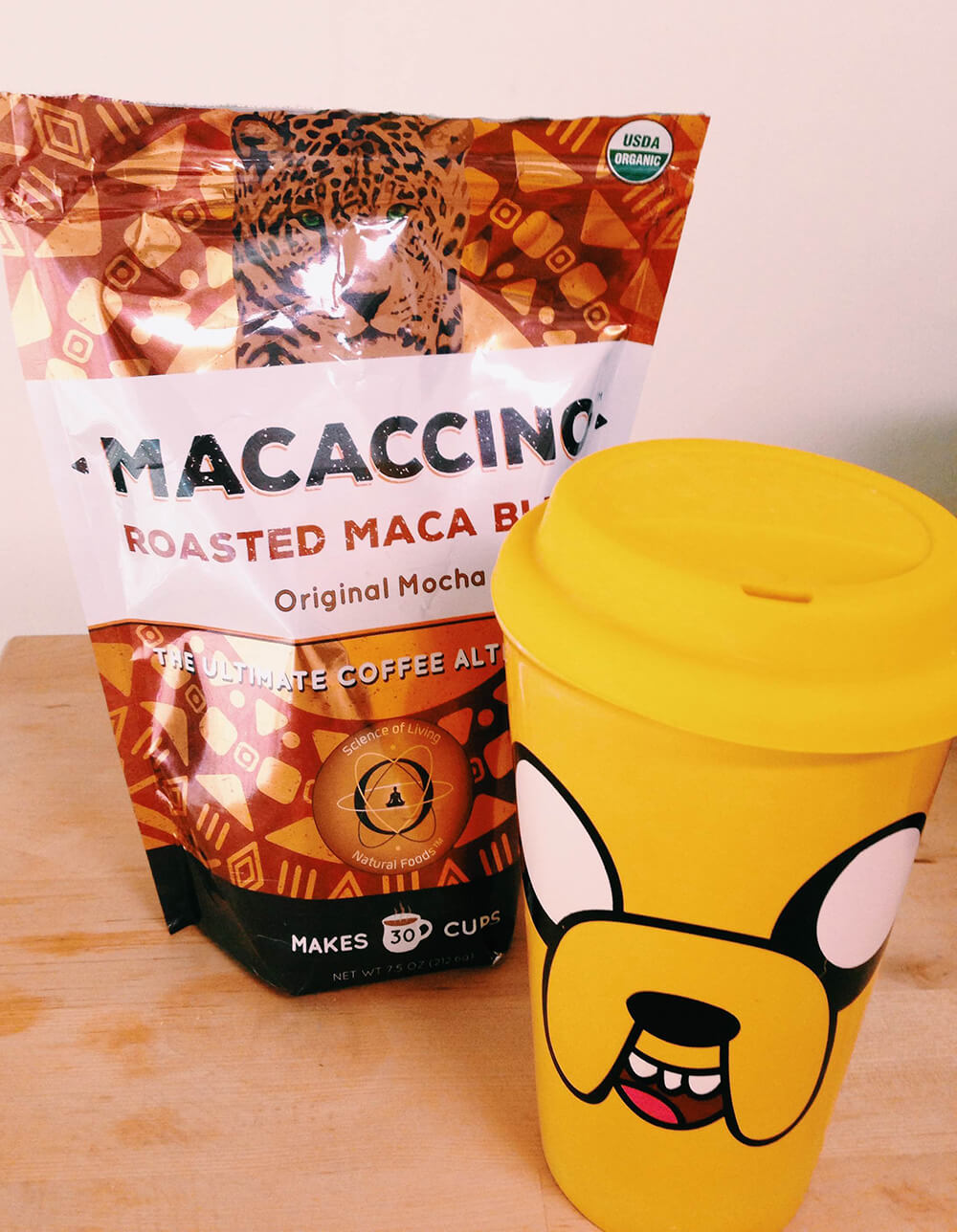 It was nice a chilly this morning, so chilly I got to wear a sweatshirt while getting ready. I was in the mood for something warm and comforting, and didn’t want to make a cup of coffee (just in case I needed a caffeine kick in the afternoon.) So I made a little latte using Macaccino. They are a new coffee replacement that is on the market, and I think it works best as a latte rather than with just water. I made my own latte by mixing a tablespoon of macaccino with 1/4 cup of hot water. Then I added 8 oz of hot soy milk and a tablespoon of a pumpkin caramel syrup. It was pretty amazing, and perfect for the weather. 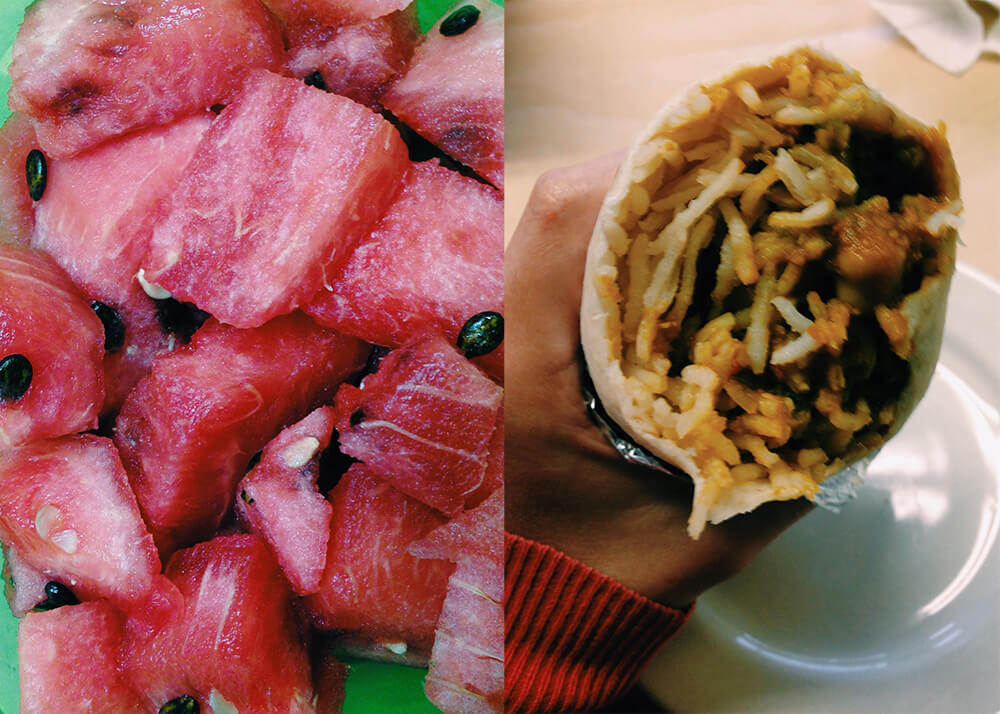 Lunch consisted of watermelon, the last watermelon of the season! It was nice, this year we had yellow, orange, and red watermelon. But I think my favorite has been the red watermelon. It was just perfect this year. I ate a curry burrito with it. I used white rice my Mother made from a previous night. It was weird rice, I have a feeling my Father bought instant rice and didn’t tell my Mother. The other half is a South Indian styled chickpea and eggplant curry from Vegan Richa‘s cookbook. Sorry the photo is so crummy, I was trying to take a photo discreetly since my bosses were there. They nicely offered me some corn chips, and ate a small handful as well. 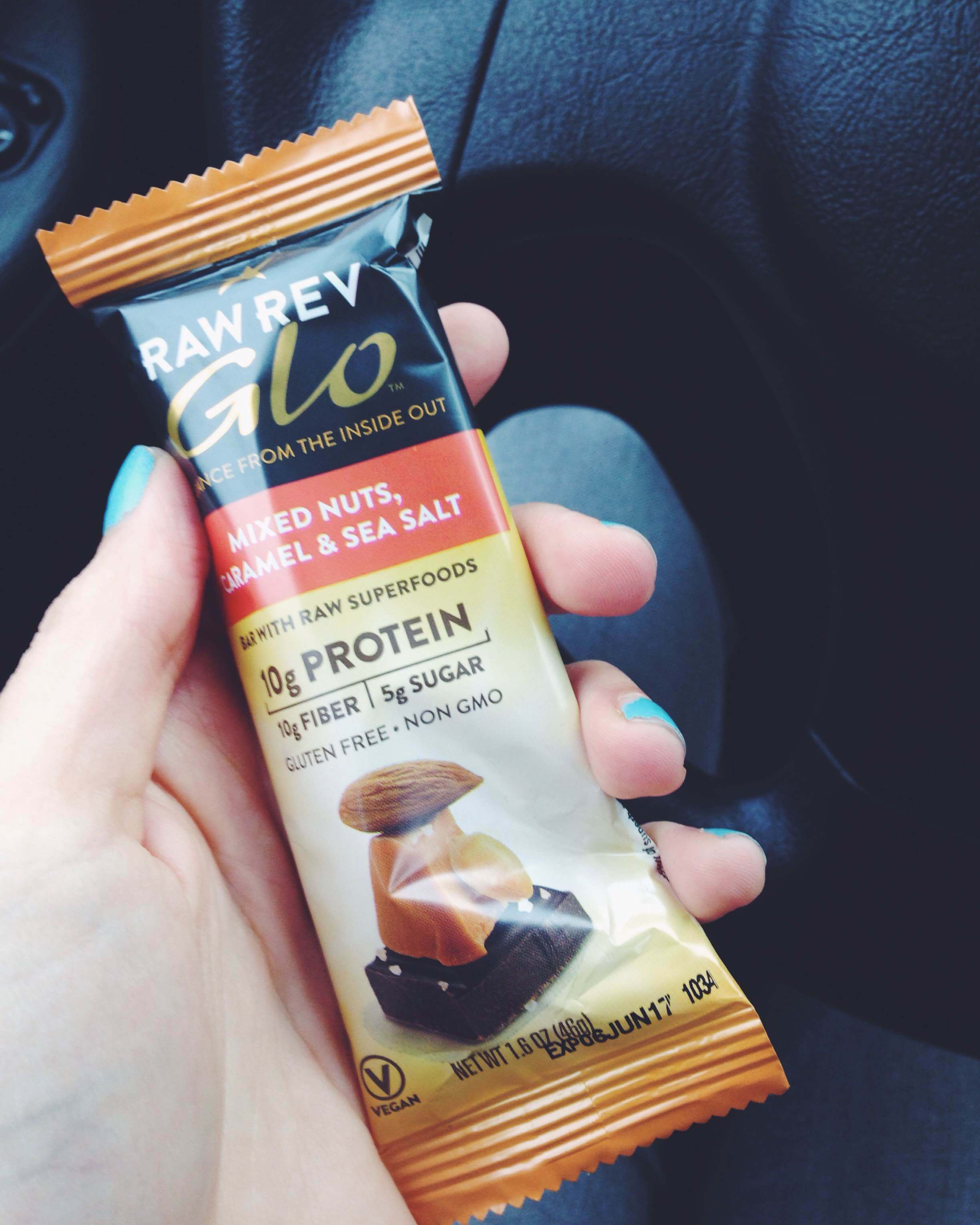 After lunch I eventually had a snack bar that I made. I forgot to take a photo- plus they were ugly looking and nasty tasting. I was trying to make a bar using tahini, cranberries, and lime coconut chips. It was a MASSIVE fail. Oh well. I drove by Wegman’s on the way home from work to pick up some veggie dogs for Jon on Friday. He is going to a Mets vs Phillies game and his office is doing a tailgating thing. I opted out since there are so many reasons why a pregnant woman shouldn’t be at a baseball game. No beer, uncomfortable seats, peeing every inning. Besides I am not a huge baseball fan. I was pretty hungry at the end, and grabbed a small bar to nibble on before dinner. I am a huge fan of these Raw Rev bars, though I only get them on special occasions. 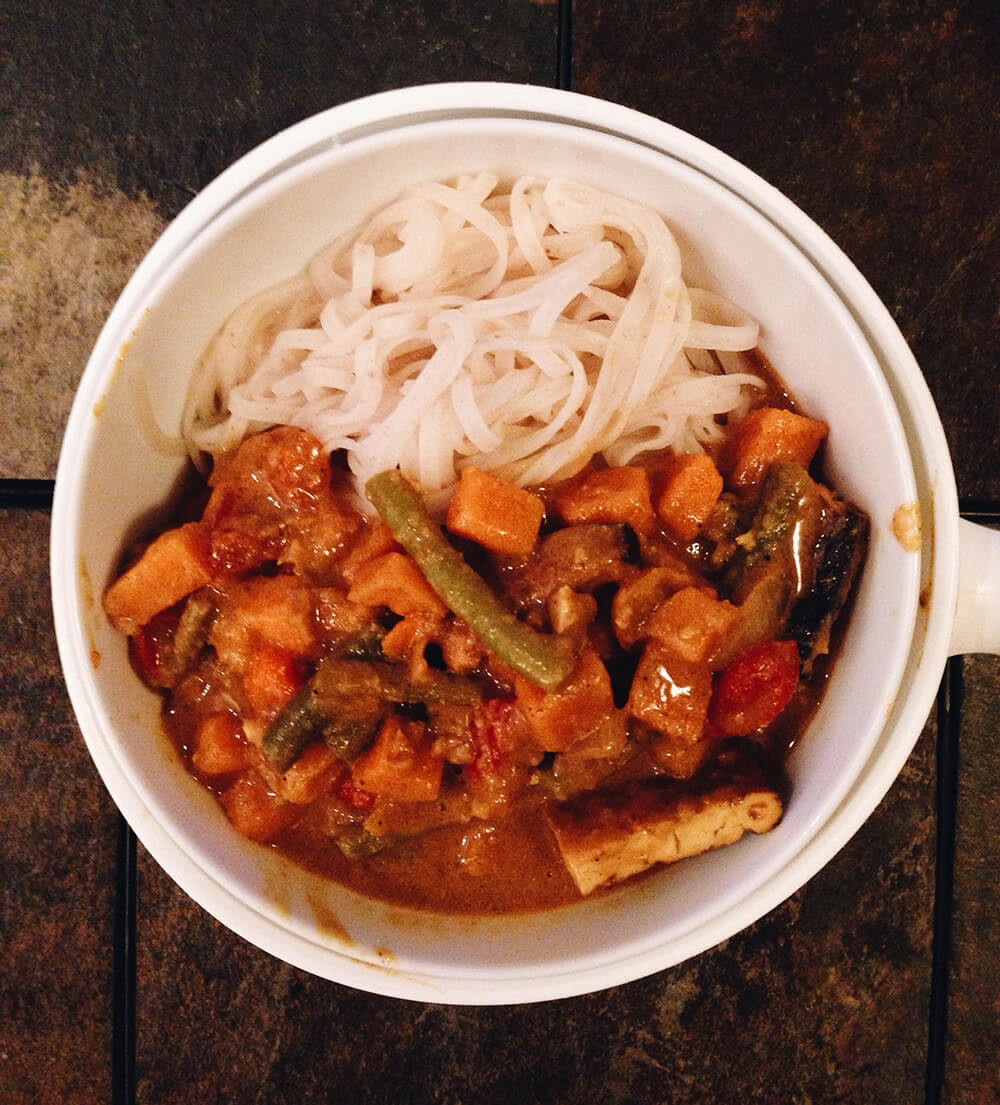 I originally was planning on going for a run afterwork but it was raining a little and my hamstrings were pretty tight from a workout from the day before. But I kept with the plan of eating leftovers and had some brown rice noodles with leftover massaman curry from Vegan Eats World. The curry is filled with green beans, sweet potatoes, cherry tomatoes, and baked tofu. If you’ve never had a massaman curry before it is pretty much like a peanut butter curry. It’s awesome. Sadly, after dinner I got a lot of acid reflux, so I am not sure I will be eating anything else for dessert. It is seriously up in the air. 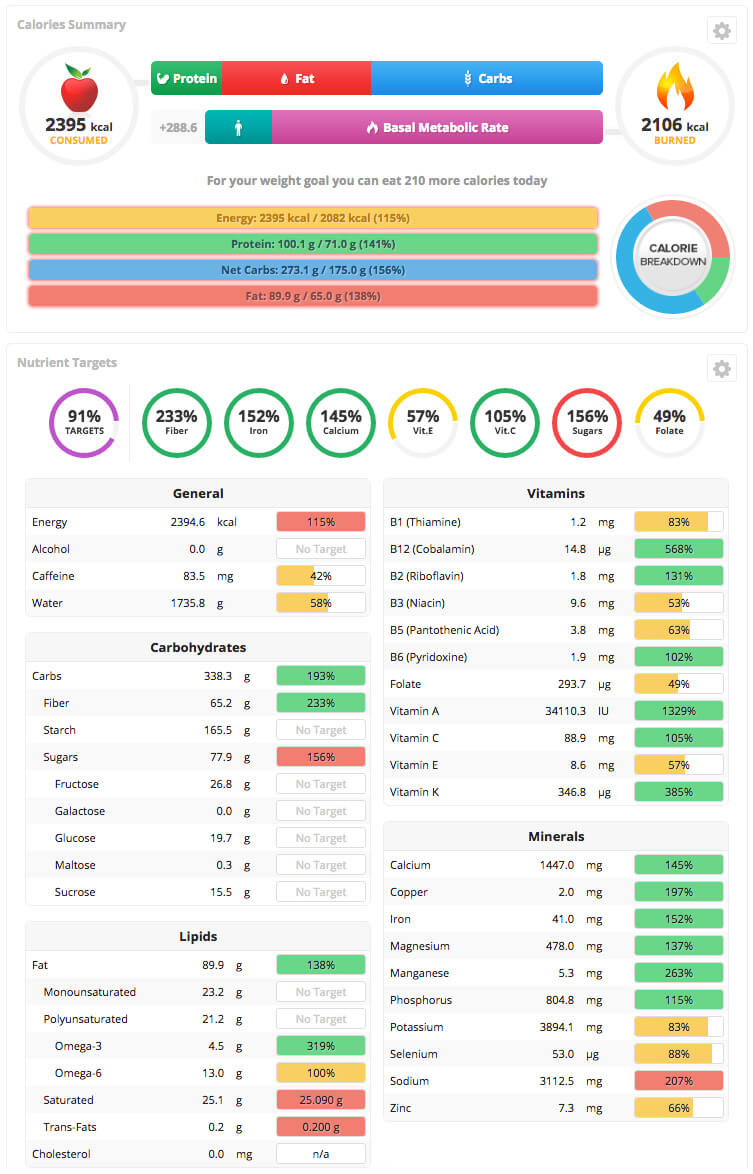 So how are my nutritional stats? Well, for one I noticed some foods didn’t really track any nutritional information other than what is on the label. So I might have been a little closer to some of the nutritional goals. But that is also why I take prenatal vitamins ^__~ And FYI cronometer is a little weird. I always get a lot of red because I have it in weight gain mode I guess most clients are trying to loose weight. But if you read closely, it says I can eat 210 more calories. I already ate 2400 calories! I got 100 grams of protein, 273 grams of carbs, and 90 grams of fat. I am a little shocked about the fat since I tend to have a low fat diet. Not really intentionally though.

Well, I am off to watch some TV with the hubs and count kicks for the doctors. Ugh. It’s so sad, it is always within 10-15 minutes I count 10 kicks. Plus I tend to ignore the small ones, depending on how interested I am in the TV show.

What are you guys snacking on today?