Last night Wolfie saw me chopping up the beet and got very excited, and thought he was getting some. I felt bad when I told him he couldn’t have any, but told him that he could eat some in his smoothie the next morning, he was pretty excited. So that’s just what I did. I chopped up half a beet into the smoothie he shares with Jon. Then I tossed some into my smoothie. I didn’t take a photo because mornings are chaotic, but it was a chocolate-beet-strawberry smoothie. Tasty stuff. Jon continued to have his pickled peas, salsa verde sides for lunch, but no leftover wrap. Yesterday I had a stroke of genius of making a quesadilla with the leftover okra dish and some vegan cheese. So this afternoon I tried it out and it was really delicious, although overstuffed. I will probably be finishing up the last bit of the leftovers this way this weekend.

It is also worth noting, there is no ice cream. I know! I am a shameful person! But I went into the freezer to start it up, and saw I never put the ice cream maker in the freezer. I could scream! So I guess it will get churned tomorrow. If it is any good I will try and post a recipe. 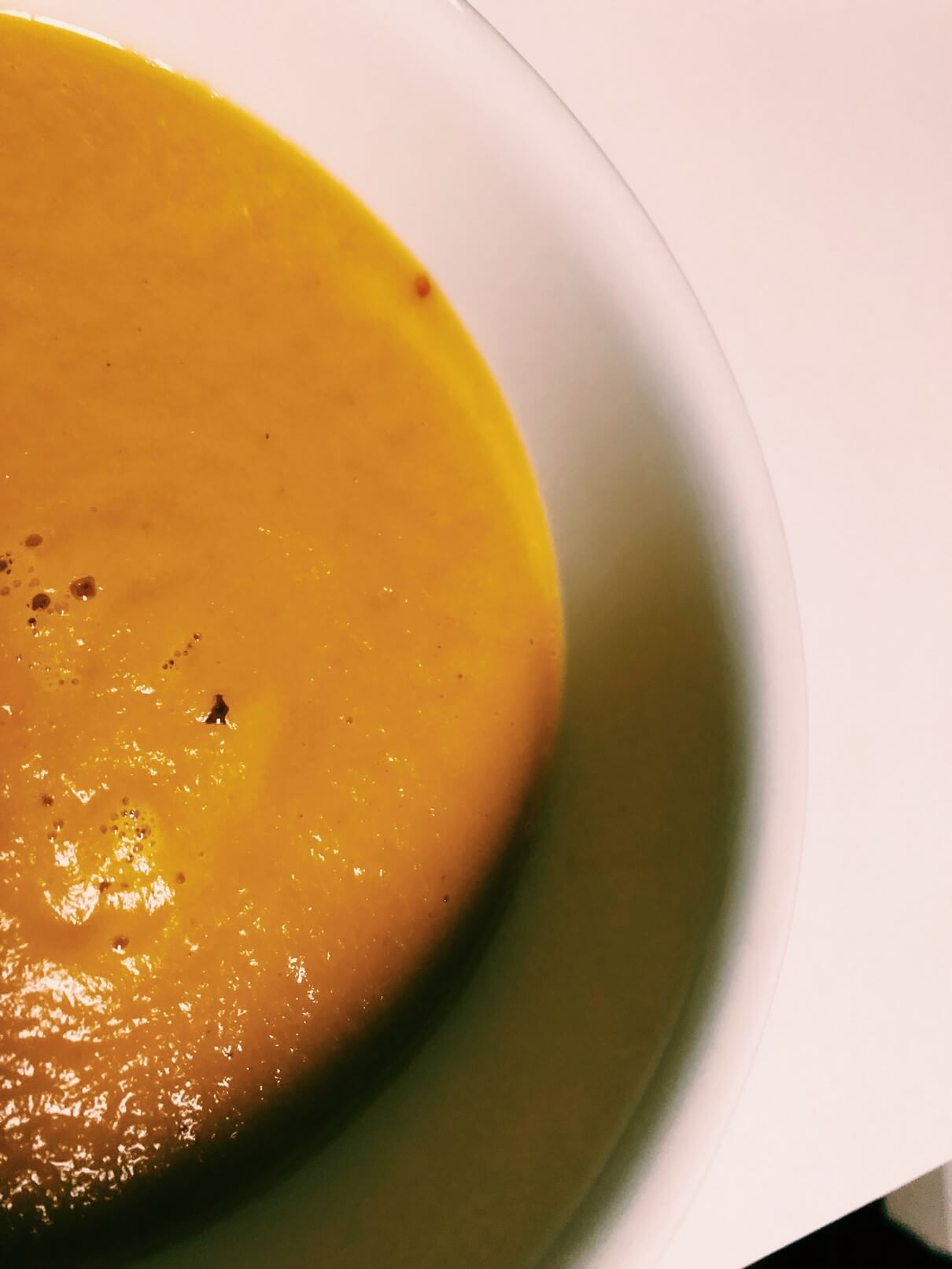 Today was a pretty hard parenting day, so I really had to push myself to make this soup tonight. It is pretty simple really though. Just one pound carrots, one pound golden beets, 1 onion sautéed, 1 tbsp red curry paste, boiled in 4 cups stock and blended with 1 cup almond milk. The original recipe roasted the roots, and used coconut milk but it was too hot and I accidentally used all my coconut milk to ice creams (so too hot.) It was tasty, and simple to make, but peeling so many tiny carrots was a pain. *cries* I served it with some of a half baked loaves of bread from Aldi, which is cheap but really nice. I super recommend getting them since it takes less than 10 minutes to bake, and the crust is always super perfect. 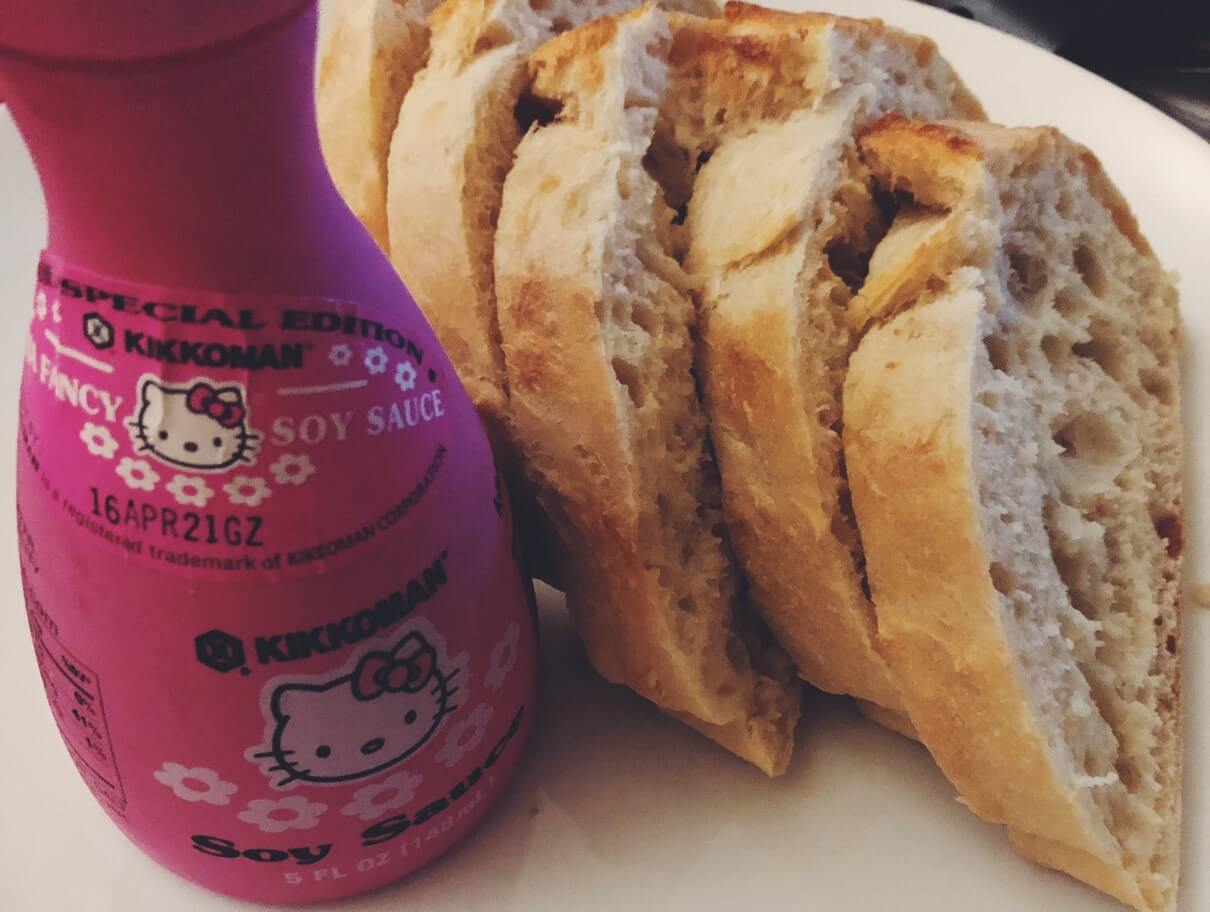 And if anyone follows me on Instagram you might of remember seeing one of my stories about a cute Hello Kitty soy sauce container. Well I got it, justifying it as the “fancy serving soy sauce.” And finally it had it’s day in the sun. The recipe didn’t call for salt, so I forgot to put it in. I used homemade stock, and I never salt it like commercial stocks and broths. So we just added soy sauce to make it saltier.

Yesterday was crazy, and exhausting. I just couldn’t wake up in the morning, and was so tired I was nauseas, so my lunch was cherry ice cream. Eep. Then Wolfie wouldn’t go down for a nap, so I figured might as well take a nap with him. 3 HOURS LATER I woke up! Wolfie stayed down for another 20 min. It was not expected at all. I had to dash out the door to get a vegan pizza slice and a cupcake because we were off to a birthday party. So by the time I got home I didn’t have the brain power to think. We just had some jarred tomato sauce, spaghetti and frozen “meatballs” from Aldi’s. I didn’t even think about blogging since I didn’t eat any food from the CSA, though looking back I could of made a fun post of CSA must have products. I guess next time right? 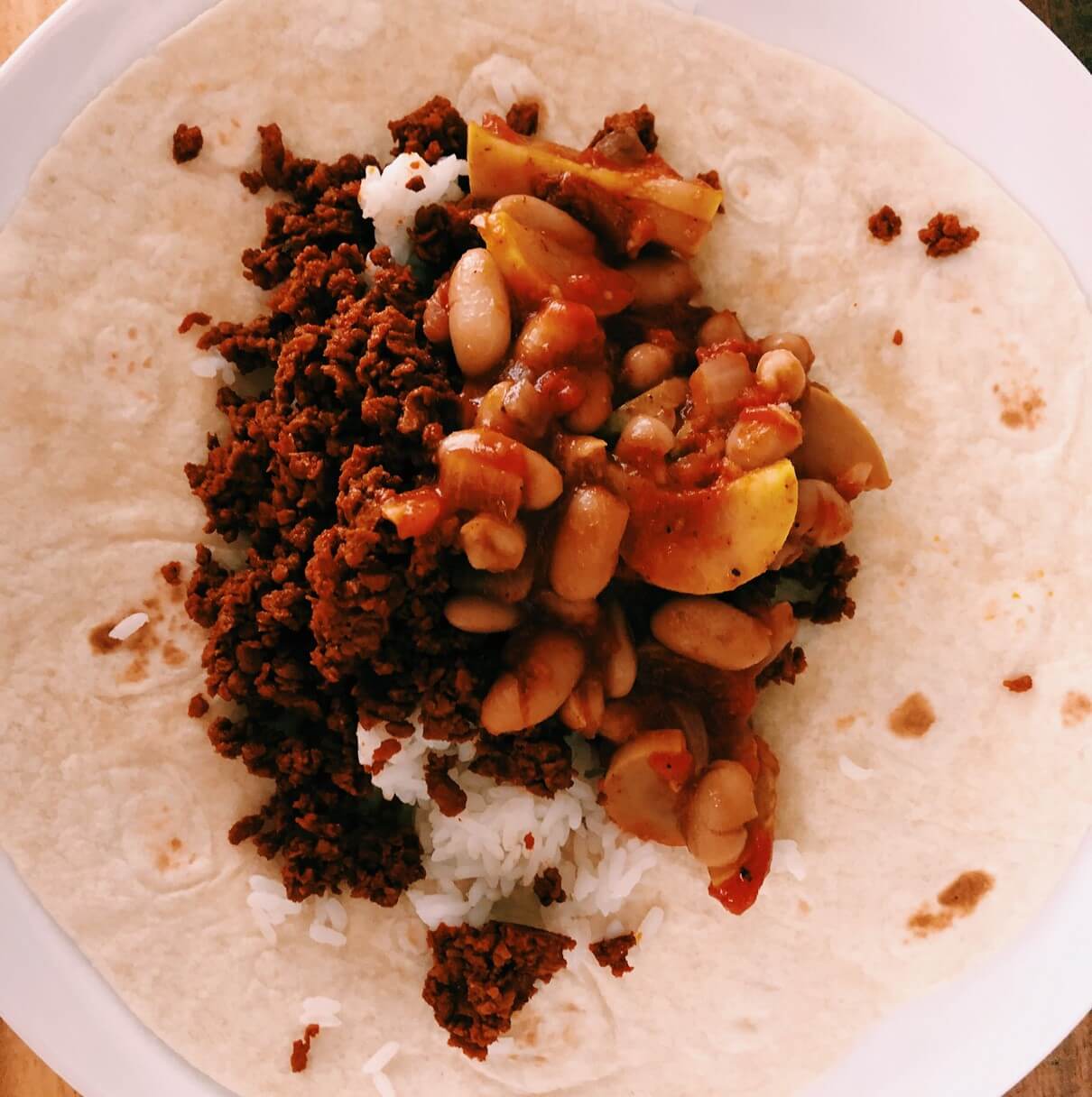 ANYWAYS…… what did I eat? Well I did take a LIIIIIITTLE bit of leftover stew from last week and made a burrito wrap with white rice and soy chorizo from Trader Joe’s it was much tastier than I was expecting. I do have to say you guys will most likely see tons and tons of wraps on the blog, because it is the main way I reuse leftovers. And if I can’t use the leftovers fast enough, they get wrapped up and frozen. 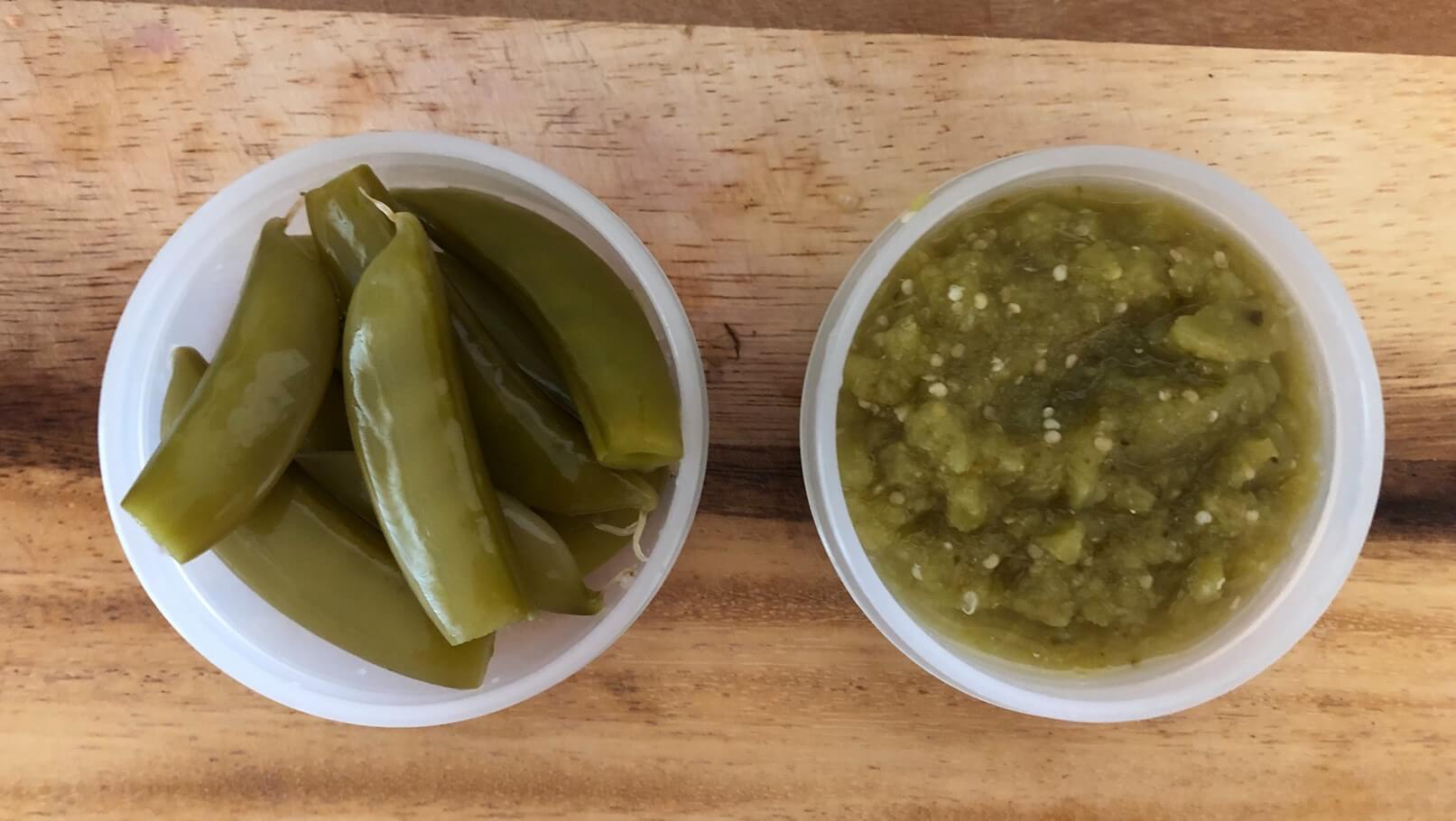 Naturally a great way to use up produce is pickling. That way it can stay in the fridge for awhile until you are ready to use them. I always pickle hot peppers from the CSA. It is pretty quick and easy, and is great because I hate buying ONE jalapeño at the super market for fifty cents. These pickled snap peas are being tucked into Jon’s lunch tomorrow. Our CSA had such a great year for peas BECAUSE of all the rain, so much that I think they have a pick what you can on the board. So I might of went a little nuts.

Next to the peas is salsa verde I made last week. I try not to make it since it involves roasting tomatillos, but I just couldn’t help myself this year. It was really rewarding to use poblano peppers from the farm as well. I haven’t decided but I am sure I will be making a wrap for Jon tomorrow as well.

The big dinner was an African peanut stew with eggplant, okra, tomatoes, and the stir-fry greens. The dish is from Chad and is called Daraba. I used this recipe and I wasn’t too impressed. The recipe was super simple, but I think that was it’s downfall. I think there were a few steps I could of added that would of given a lot more flavor. And I would of liked to add more spices to it as well. But it used up a lot of vegetables so that was at least good.

I’ve been itching to bake but it hasn’t happened yet. I am a little nervous, but I guess soon I should bite the bullet. Though I am not sure if I will be baking with any of the produce. So we will see what tomorrow brings.