I know it is only the second day of Vegan MOFO and I am taking a break from the prompts. I like using this blog sometimes as a way to remember things, so keeping up with some of my pregnancy posts is important to me. Granted, this post IS about vegan food, so it is still in the same spirit. It just doesn’t have the theme of the go-to-impressment meal. I won’t lie- you will be getting a preview of future Vegan MOFO posts. XD But let’s move on- 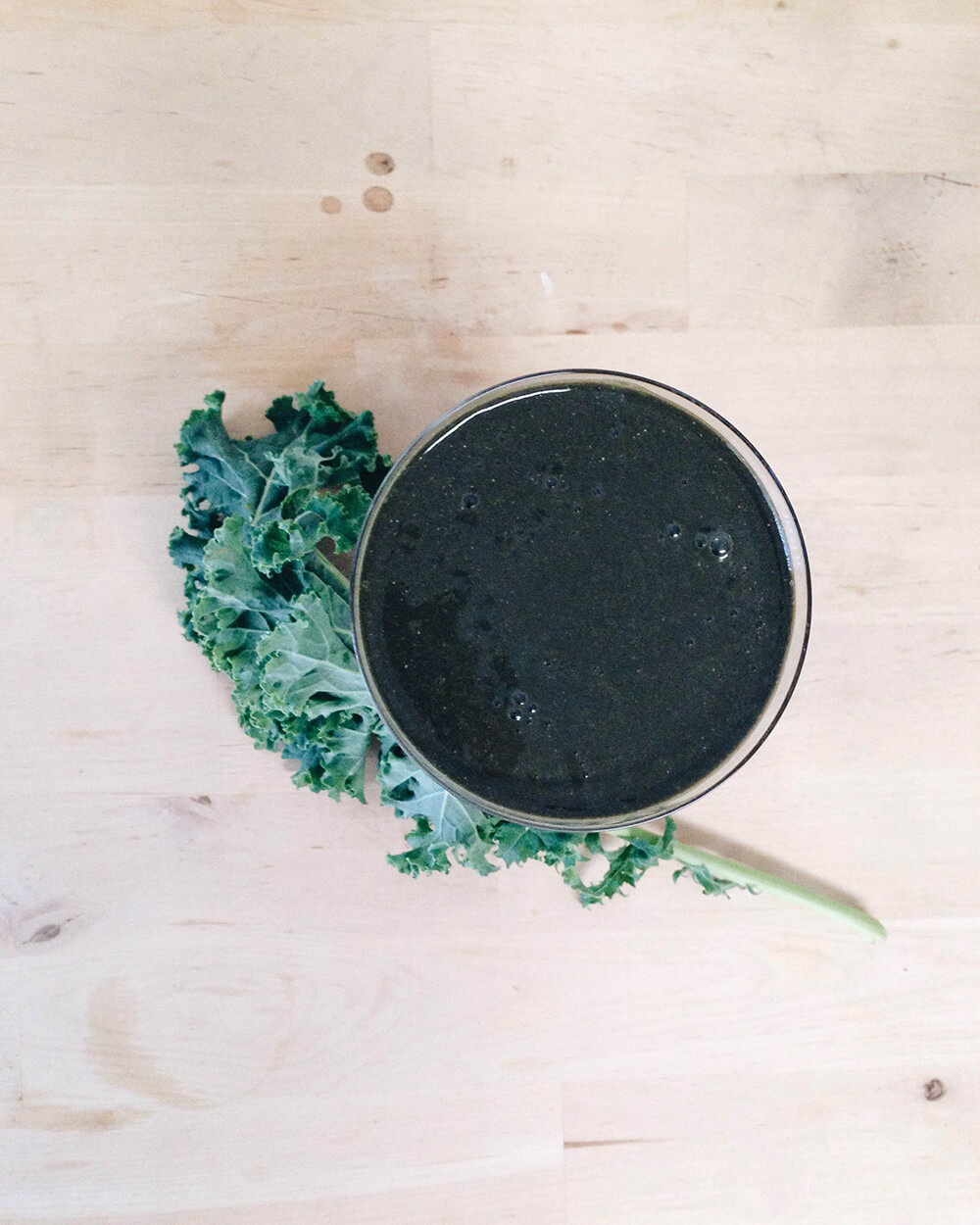 As always I start my morning with a shake. Yup, I’m boring. I usually am so busy doing remaining dishes from the night before, and prepping our lunches that I really like having quick shakes that I don’t need to think about. So this shake is one I featured before in my first and second WIAW posts. They turned out looking more brown looking. I guess it large depends on how much greens I happen to add that day. XD The photo looks extra pretty today since I was taking a photo for a Vegan MOFO prompt. 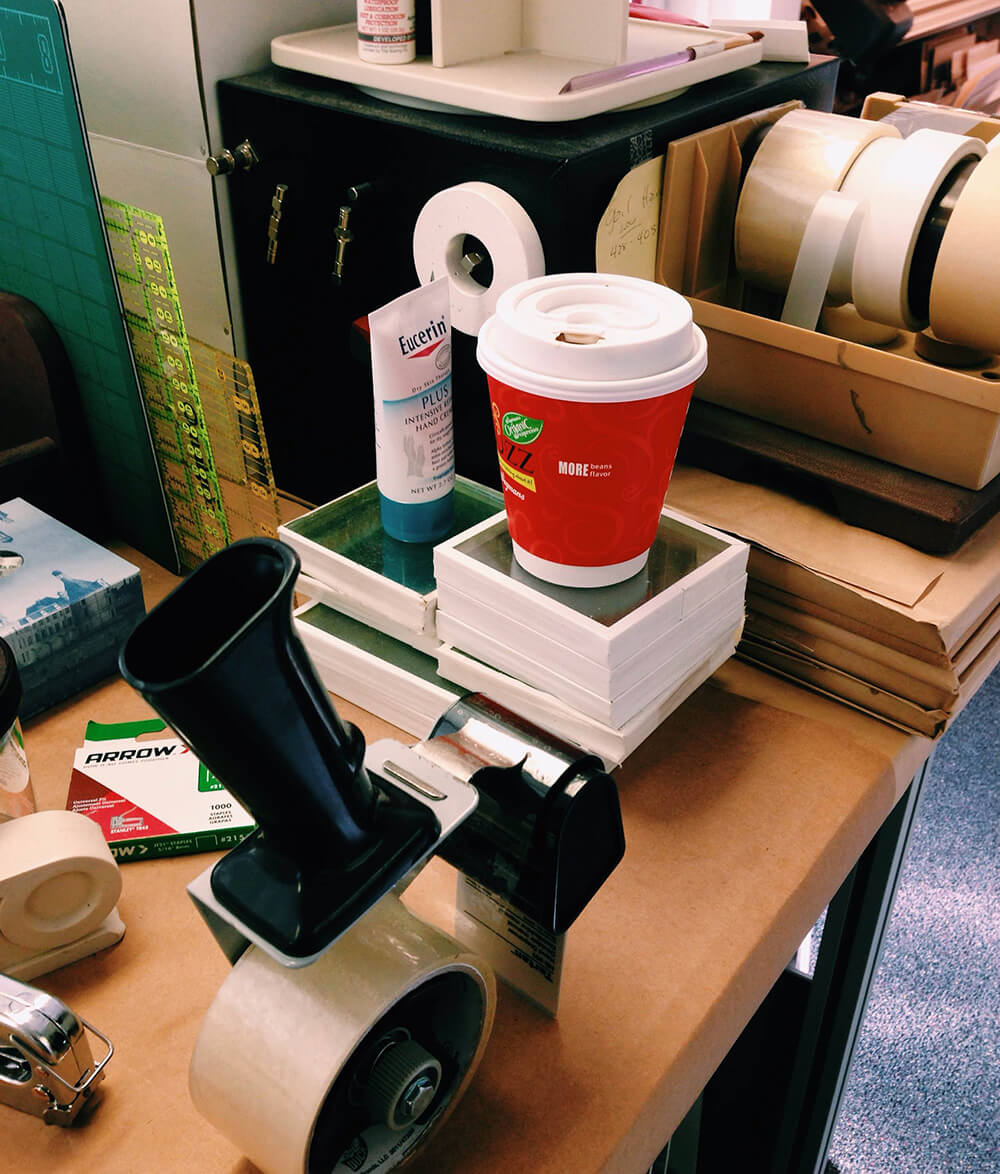 Before heading to work I had to stop by Wegman’s to buy some peanut butter since we ran out. How will my husband live without his PB&J sandwiches?! XD So I figured I would pick up an almond milk latte as well. I am always surprised how much a latte will fill up my belly until lunch time. I figured I would take a photo of my “drink station.” Keeping my work area clean is SUPER important. Like 99% of the stuff we get at the frame shop isn’t worth much. Many things are digital photos or a $40-100 print. But some things are one of a kind- like needlepoints, old family photos, kid art. And now we are getting increasingly more and more expensive art, ranging from $1,000-80,000! No joke, the other day we got a call because a customer thought we lost his $80,000 print we framed, and I went white. I had no idea that piece was so expensive. Turns out he forgot that he brought it an appraiser to make sure it was authentic. Side note guys- if you think you have $80,000 print, get it appraised BEFORE getting it framed. They are most likely going to have to open it back up and reseal it. I know how many of my readers are sitting on expensive art ^__~ 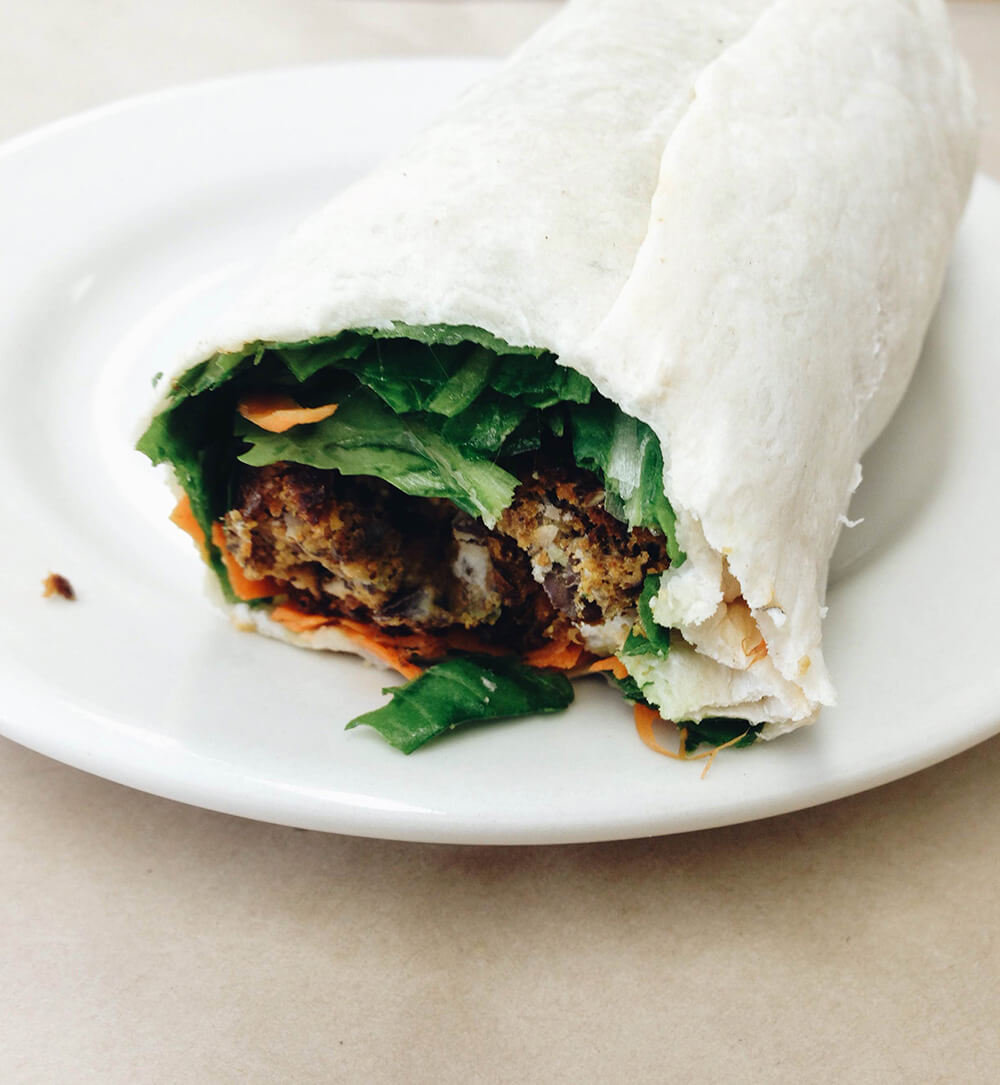 Lunch rolled around 12:30, and I ate my cut apple and a wrap with crumbled pumpkin black bean burger, radish greens, carrot shavings, and some Just Ranch dressing. The wrap was okay, it was a little dry. I also ate a few handfuls of tortilla chips because my boss took them out while we were eating. How do people NOT eat chips when the bag is opened?

So I didn’t photograph the apple and chips (use your imagination guys). I also didn’t photograph the two rolls of smarties and one of the new Nut Filled Clif Bars. I actually had the Coconut Almond Butter, and it was pretty good. I am not sure how much of a fan I am of them. I think I will stick to the originals, but they are still worth the occasional splurge. 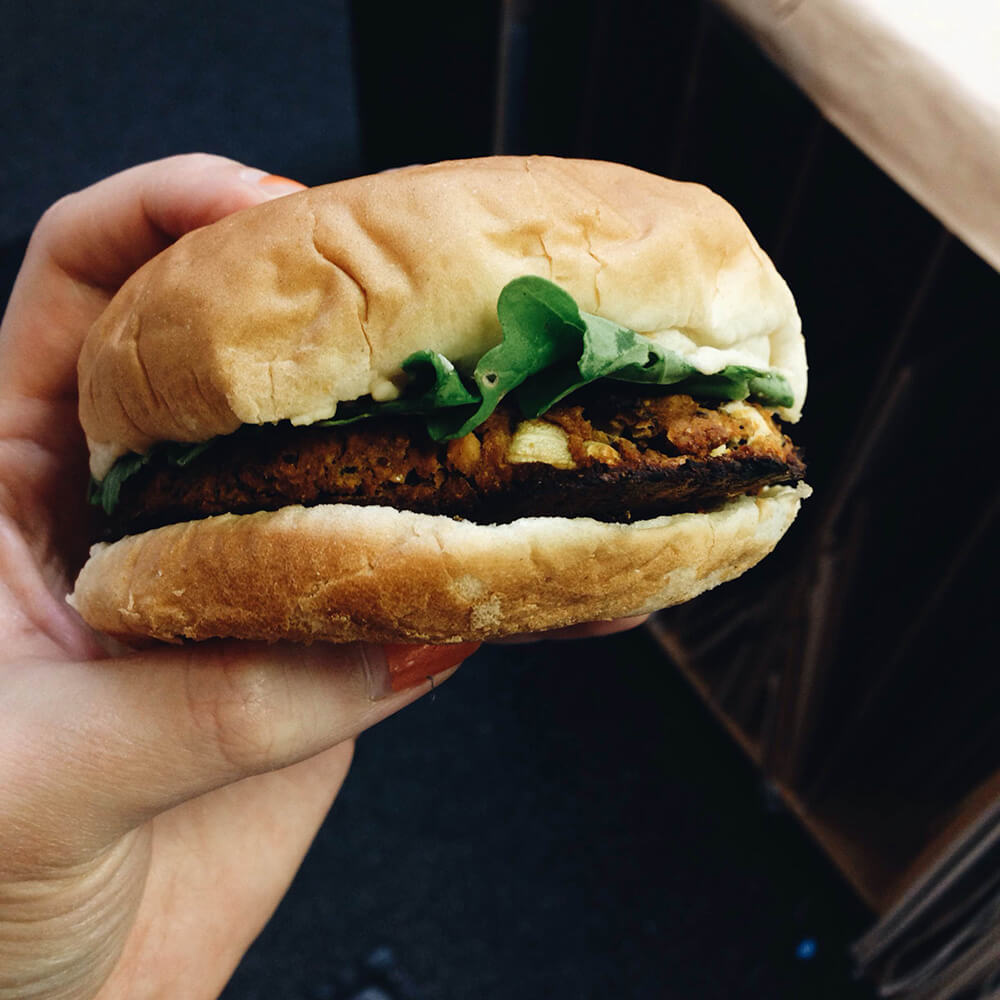 Before work I took some photos of the Pumpkin Black Bean Burgers (will be posted tomorrow) so I figured I would wrap up one of them and eat it as a mid-day snack. It was actually a pretty nutritious snack- gots some extra beans, pumpkin, and radish greens! I added some roasted garlic hummus to the bun, but I wish I could of added more since it was a little dry… and cold. Dinner is going to be featured in an upcoming Vegan MOFO, I wonder if anyone will be able to guess from the photo? It is kind-of a stretch for the prompt. XD I rarely make meals like this, but I know I should start getting use to it as I plan to have kids. It isn’t too hard to make three separate things, especially when you can just shove the tofu in the oven. I had a little brown rice, curried beets, and tandoori tofu from Vegan Eats World. I saw that My Cat Loves Daiya tried it out and it just looked so yummy I had to do the same.

Then I wrapped up the night with a Pumpkin Spice Macaccino Cupcake. Again, something I will post on the blog for Vegan MOFO. I didn’t take a photo since I ate one of the first batches where I mixed in chocolate chips and had a crumb topping. The topping- uh…. melted. So they looked pretty nasty before I took any photos. So I made a second batch without those add ins. Baking is never perfect the first time right? 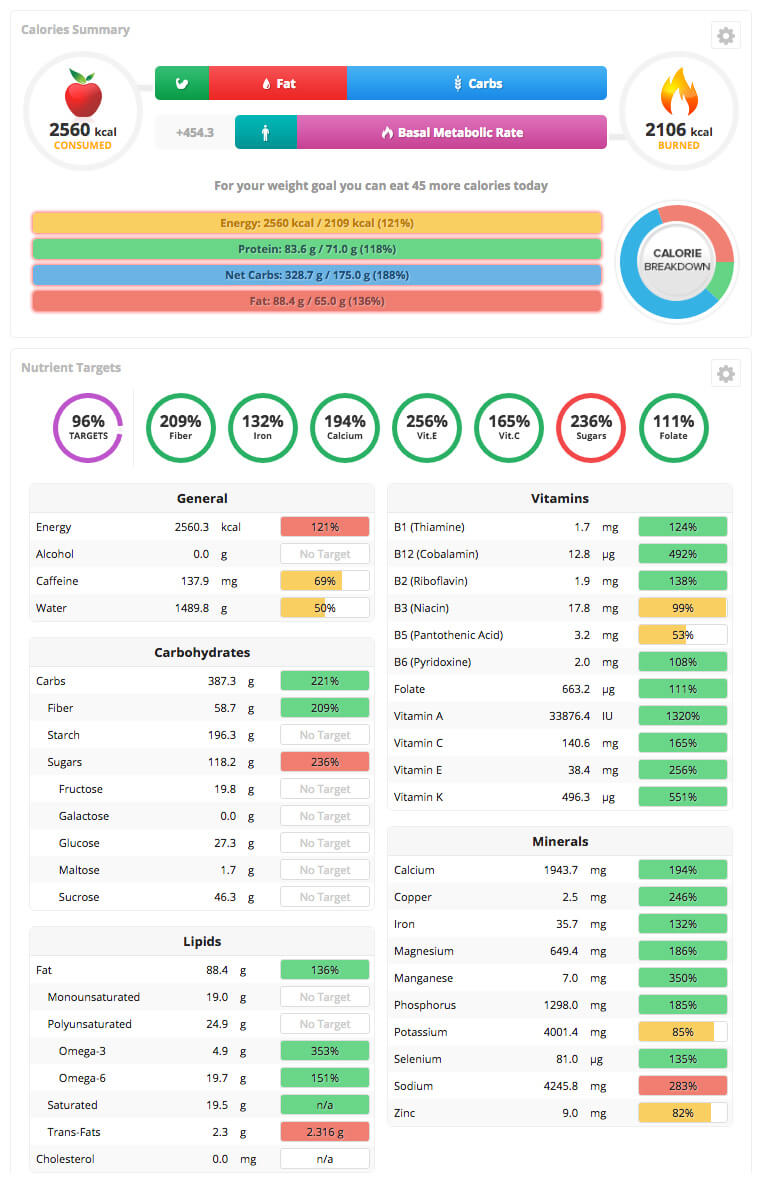 So how did I do? Well, I ALWAYS point out, everyone is different, and needs different amount of calories. I am 8 1/2 months pregnant, so yeah, I’m eating a lot XD Just click the chart to enlarge it if you can’t read it. Out of all the days I think I hit the most of the nutritional goals. As always, the packaged goods aren’t very accurate, I mean the clif bar didn’t register most of the vitamins and minerals, which is a bummer since the regular clif bars usually show up.

I know it looks like I ate A LOT of sugar, but I have my specs registered for 50 grams of sugar, the suggested amount. About half of the sugar that is being registered are naturally occurring from the banana, apple, beets, and carrot that I ate. Yeah, not the greatest that I have doubled the amount from smarties, clif bar, latte, and a muffin/cupcake. And let’s not forget all those sneaky added in sugars in dressings and breads and such.

I can’t believe I am getting to the end. There might be ONE more of these What I Ate Wednesdays before the baby comes. And if I try hard, I might do a few more to show the food recommendations for breast feeding. The good news is that I can freak out a lot less about iron! YEY!

What are you guys eating today?