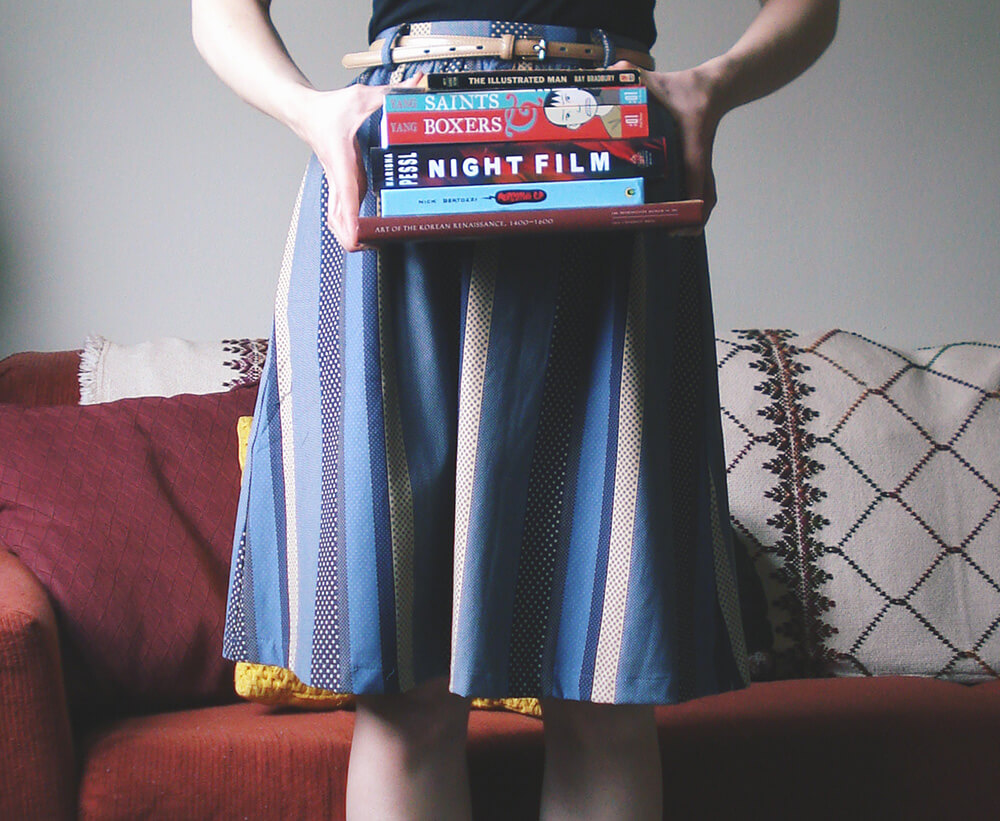 I’ve been meaning to post this months ago, when winter ended. Now spring is ending and I already have a set of books that I read and want to post here. I use to read all the time when I was younger. I loved book series like Winnie the Pooh, Mary Poppins, American Girls, and The Chronicles of Narnia. I fell out of the reading habit when school started to assign books during the school year. Sure I did my summer reading, but having to read “x” amount of pages by the end of the week seemed to suck the fun out of reading.

It wasn’t until college that I really enjoyed reading textbooks (seriously). I also became more interested in reading for leisure. I’ve also learned to take graphic novels more seriously. They’re underrated.  Many people seem to think graphic novels are just comics and compare them to Spiderman and Superman. But graphic novels can be an effective medium for great storytelling.

The Handmaid’s Tale – I picked this up after I saw it recommended on A Practical Wedding’s Feminist Reading List. I bought it for my kindle and found out that I don’t like reading novels on it. At least it is a good read.

Persimmon Cup – I donated money to this graphic novel production through Kickstarter. I just got it in the mail a few weeks ago and am very excited to read it. I haven’t come across and web links to share in case someone else is interested in purchasing this book .

The Illustrated Man – I love short stories. I finished up Night Film, which was a christmas gift, and needed something that I picked out to read. I think Jon found this at a book sale and hey! The cover has already fallen off, which is sad because I am fairly certain I started to read it because of the brilliant cover art of a tattooed man. 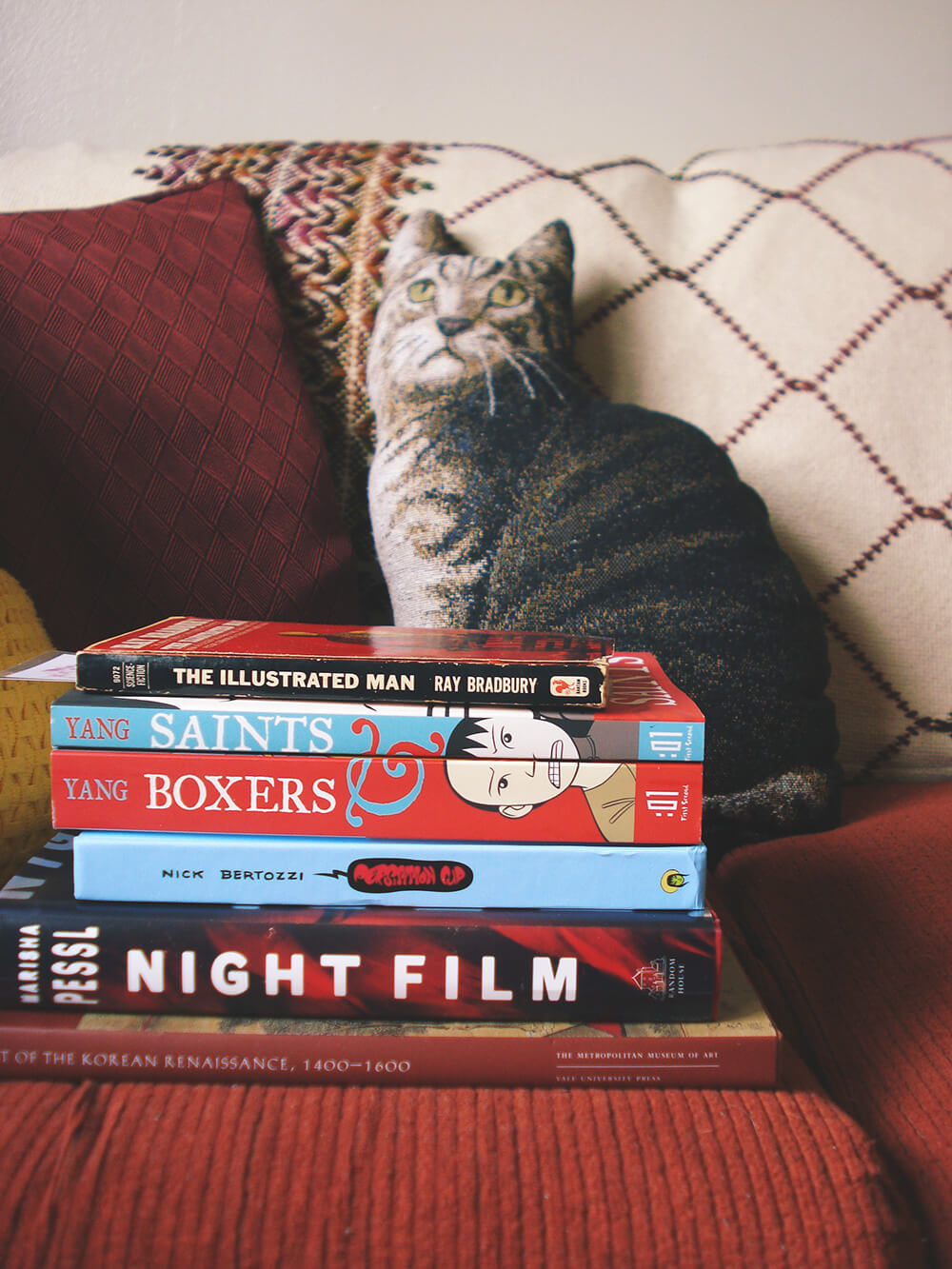 I came home from work one day to an Amazon box. It was around Christmas time and thought I already received all of the online gifts I ordered for other people. Right? I opened the box to find this pretty cover, all shiny and mysterious. I wanted to read it straight away. It turned out to be a gift from my mother, who just happened to forget to mention anything about it. That was probably the height of my enthusiasm.

Ashley Cordova is found dead in an abandoned building. The police say it was suicide. Scott McGrath believes otherwise. Ashley is the daughter of the infamous director, Stanislas Cordova. His films and reputation are dark and mysterious. The further McGrath digs, the darker and scarier Ashley’s life seemed.

I found the main characters boring, unpredictable (or rather they often acted out of character), and unlikable. The secondary characters, on the other hand, were very interesting and well developed. I didn’t like Marisha Pessl’s writing style. She italicized too many fragments to the extent that I couldn’t figure out what she was trying to emphasize. There are sections of the novel that I struggled to read through as I just didn’t care about the main characters.

On the flip side, Pessl created a beautiful alternative world. She imagined a great legacy for the director Cordova, his films, his fans, everything. I couldn’t help but fall in love with this aspect of the novel as I really appreciated the great level of detail she had woven into the character’s life. Pessl also took an interesting approach to engage the reader by creating an interactive experience. The story incorporates fake websites, news clippings, and special easter egg videos you can actually access with a smart phone. Entertaining, yes. Painful, yes. Long, oh yes. I would recommend this book to only a few people, as it isn’t a book for everyone.

This book probably puts me in the art nerd category. Yes, I voluntarily requested this book, not for school but because I thought it would be fun. I got this one year for Christmas, and it basically sat on my shelf for a few years. I decided to dust it off again, because Philadelphia Museum of Art was about to feature a Korean art exhibit of the Joseon Dynasty.

It was a fast read, but a bit repetitive. The book only spans 200 years of Korean art history. It starts when Korea had just become an independent state. Confucianism becomes a huge part of culture, which is important since most of the art emulates Chinese art (Confucianism originated in China). Many pieces in the book were inspired by Chinese artists that I remember learning about in my Chinese Art History classes.

The two styles that stuck out the most to me were the Eight Views of Xiaoxiang and buncheong pottery. The Eight Views of Xiaoxiang are paintings on scrolls or screens that depict different parts of the Xiaoxiang region in China. I found the paintings interesting since all sets were trying to depict eight specific “scenes.” For example, there were many panels from different artists representing Evening Bell from Mist-Shrouded Temple. Each artist took a different approach. Buncheong pottery usually had a blue-green glaze. The pottery designs are timeless and looked like they could have been sold in a store today.

Although the book was filled with facts and information, I was left wanting more. The book covers such a small time frame of art history, which is great for learning a lot, but sucks when you’re trying to brush up before going to an art exhibit. To put it simply, it is only about the first 200 years of the Joseon period, not the entire dynasty. 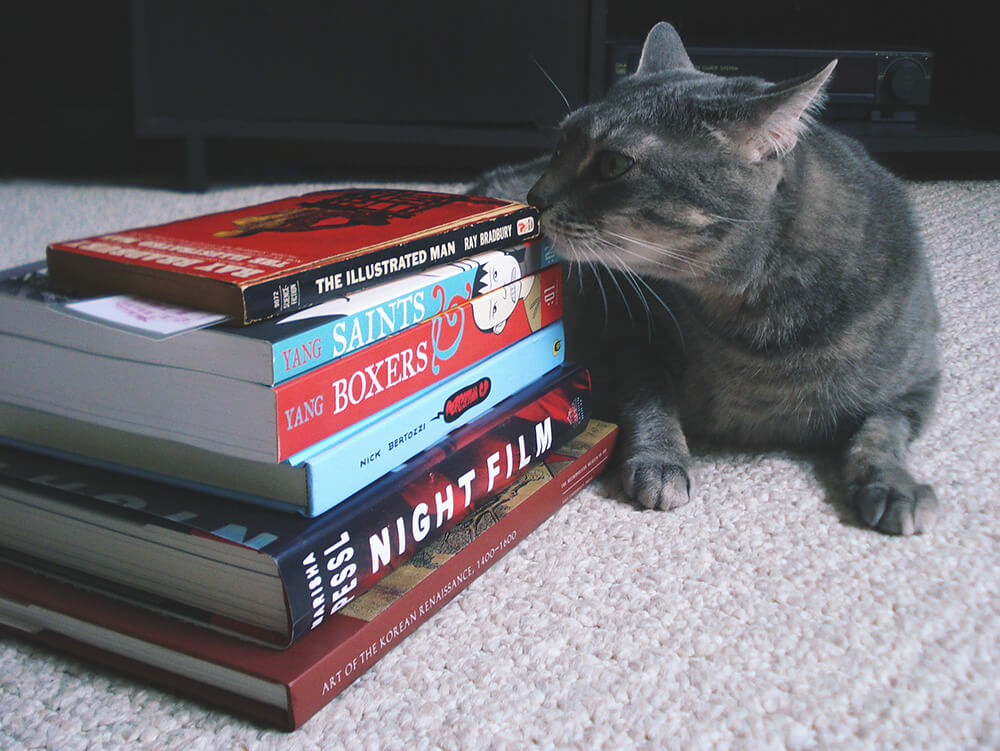 This is a book I’ve been wanting to read for a while now. It is a classic in literature and graphic novels. The book bends genres by using a comic to portray the real life events of Vladek Spiegelman surviving a concentration camp. The story flashes back and forth from present day as the author, Art, interviews his father about his past, to World War 2 Poland, as Vladek tells his story. Jewish people are depicted as mice, Germans as cats, Polish as pigs, Americans as dogs, and so on.

It is hard to talk about this book. Isn’t it always hardest to talk about the most renowned books? To me, it always feels like everything that needs to be said has already been said about such a book. It was a great read, and I loved how the style matched with the subject matter. The animal depictions didn’t take away from the serious topic. The pace of the story is great, and it never felt like it was dragging.

Everyone should read this book.  It is touching and offers a perspective of the holocaust. How it affected people then, how it affected the survivors afterwards, and how it has affected to the identity of their children.

This graphic novel was another Christmas present from my mother. I was really into Chinese history and art as a youngster, so I am sure that grabbed my mother’s attention when she heard about Boxers and Saints. Gene Yuan Yang writes a story about the Boxer Rebellion that took place from 1898-1900. Many Chinese movies and books focus on the fall of the wealthy more so than the uprising of the poor, so this was interesting read.

The series is divided into two stories that intertwine at the end. Boxers, the first novel, is about a Bao who grew up being oppressed by the Christian missionaries. He bands togethers with his brothers and some locals to study kung-fu and fight the foreign invasion (the Christians). The other story is about Vibiana, who seeks equality and happiness through the church. Both characters struggle on the path they have chosen. Bao battles morals to bring peace to China. Vibiana struggles to find her place in society as a woman and questions her faith.

First, I am not a huge fan of the art style of this graphic. Visually speaking, the characters are well designed and distinguishable from each other. Nationalities are easy to differentiate without becoming stereotypical. But I found the bright and clean color scheme unfitting for the serious subject matter. The panels were too uniform and became a little boring after awhile.

When I finished reading the stories, I felt that not every part of the stories sat well with me. A lot of themes in the stories made no sense to me. But after I read a detailed history about the Boxer Rebellion, it suddenly made sense. For example, the author introduced a supernatural element in the beginning of “Boxers,” which I found odd.  It became confusing when it vanished from the story and was never revisited even in the “Saints” story. It turns out that this was actually a historical reference, as boxers perform special rituals that made them invulnerable from attacks. Other examples would be the Red Lanterns and some of the characters exaggerated xenophobic views.

Overall the book is great if you’re already educated about the Boxer Rebellion, or to spark your interest in such a subject. It gives a great view of the people who were most affected by the Boxers, instead of focusing on political powers. I can see how this would be a great book for students to read in order to paint a bigger picture of what was going on.