Day 101: Jon sits in while I get the camera set up for my outfit photos. 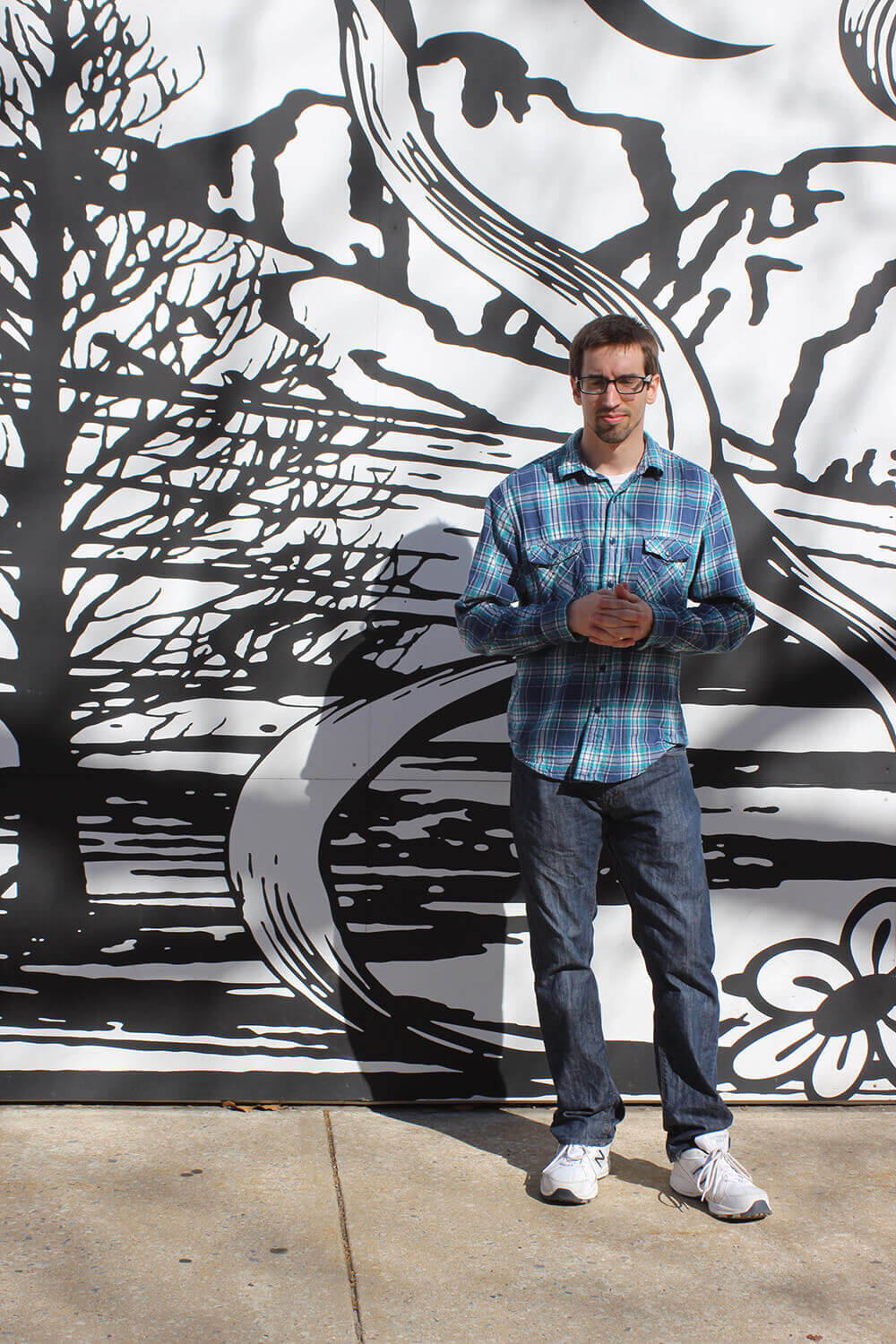 Day 102: OMG WE’RE IN JAPAN! No, just visiting the teahouse display at the Philadelphia Museum of Art. 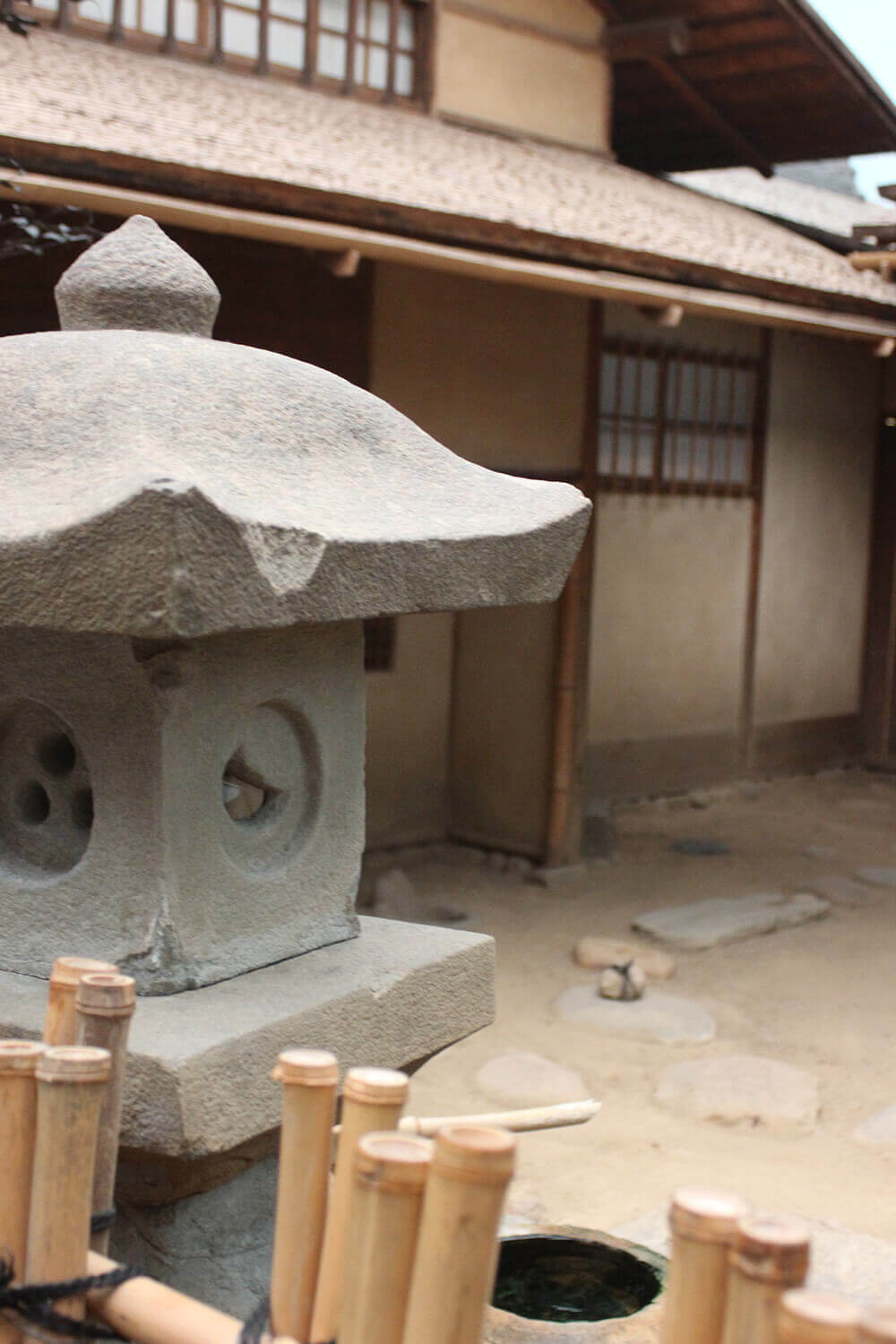 Day 103: Took photos of my mango black bean chili. Will be posted on the blog Monday. Yum! 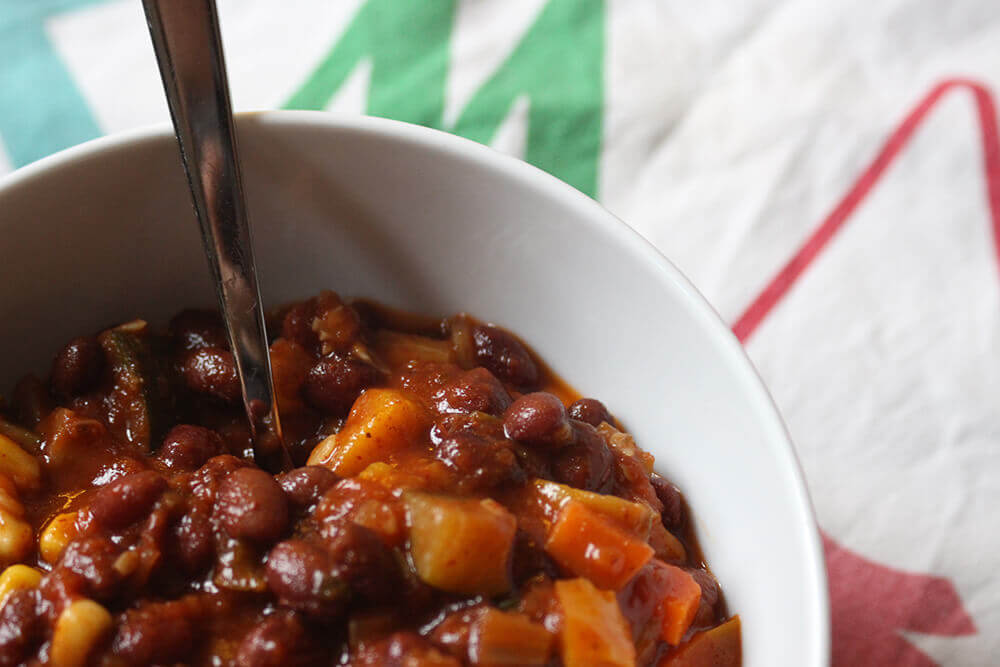 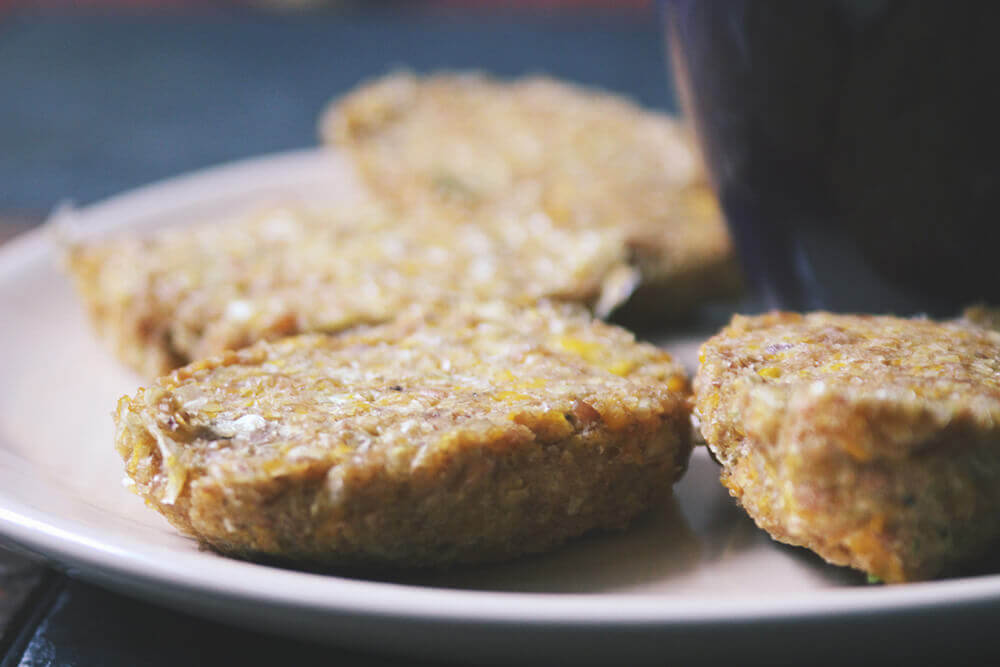 Day 105: Another recipe to be posted- sweet potato pasta with sesame seed crumbles 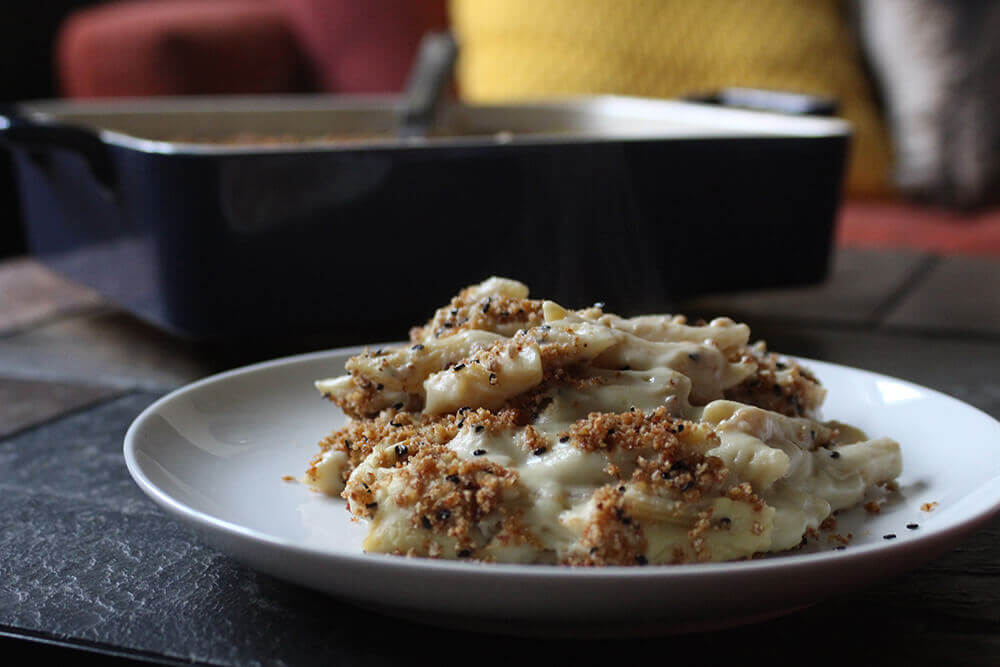 Day 106: I just noticed how cute these two turquoise doors are. 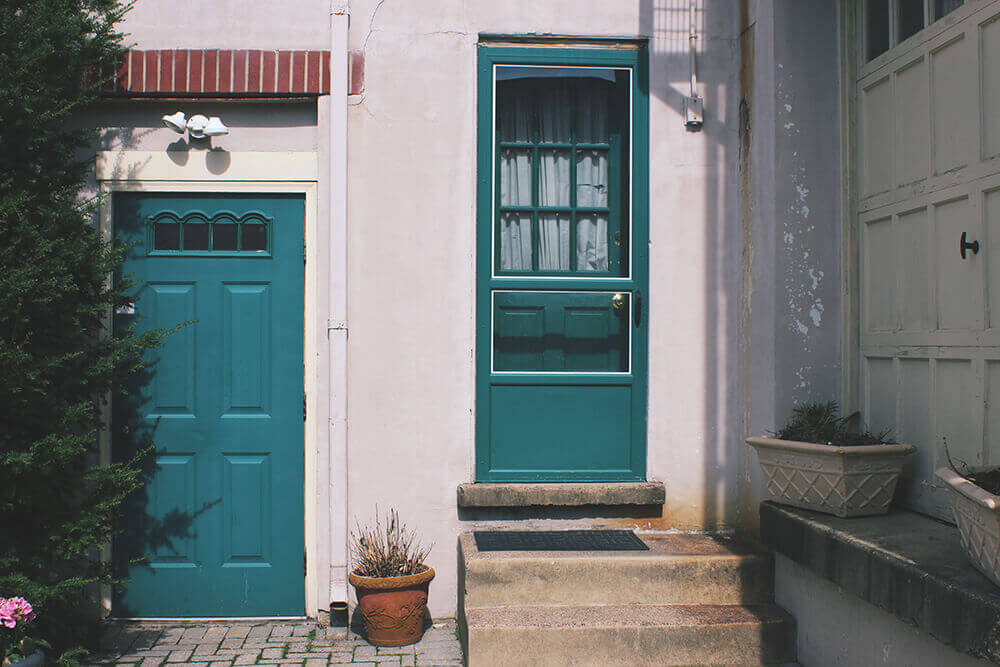 Day 107: I can’t wait to open up this bottle. You would think I would of learned my lesson from the Voodoo Donut beer, but I know Alexa and I need to try this Sriracha beer. NO SPOILERS GUYS! We will need to find out it’s disgusting on our own. 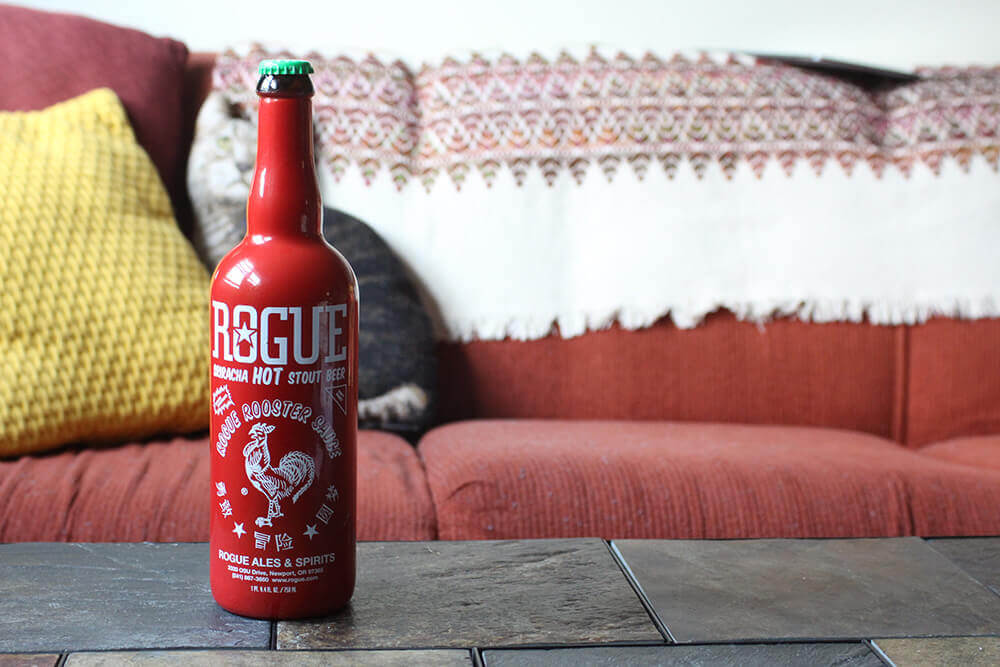 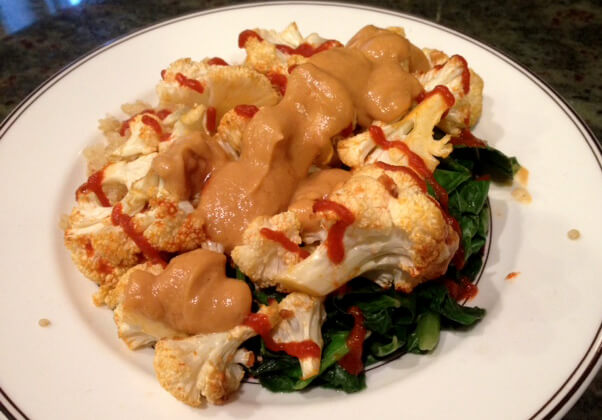 Hey everyone … I finally MOFO’d!!! (It was definitely in September I SWEAR.)

I won’t lie to you, I have never actually made my own vegan meal before. That’s crazy right?! I have always just thought they would take a lot of time to prepare and I normally don’t have all of the ingredients that are necessary for them. When September rolled around Jenny told me about “Vegan Month of Food” and recommended that I try out a vegan recipe. I was definitely up for the challenge and then I found out that the recipe I made…wasn’t challenging! I was actually really proud of myself by the time it was done, and I like to cook, so I was happy during the entire preparation process.

I stumbled upon this recipe from Vegan Richa via Jen. She’s been following her (beautiful) blog for quite some time and now I am going to make it one of my favorite blogs too!

For some reason I never seem to remember how much I love cauliflower until it happens to be in a dish that I make. I know that it’s really good for you, but I think I always find it to be daunting  when I see it in the grocery store and figure I’ll never finish the whole head. After preparing the cauliflower for this recipe I have continued to make it that way up until it was all gone. Hurray! This vegetable is just so versatile that I actually found myself saying “wait…save that because you could use it for this dish instead”.

I also love collard greens, but I find that I have a harder time figuring out how to prepare them as well. I have only ever had them once before this, and it was when my Step-Mother prepared them (oh, they were delicious) for us when my parents were living in South Carolina. I like the bitterness of the leaf as well as feeling like I am eating something good for me. Lettuce can be tricky sometimes! Anyway, this was also very easily prepared – just throw your greens into a pan with a smidge of sesame oil, pinch of garlic salt and a pinch of salt and you just wait until they are a bit wilted. Done! Delicious! 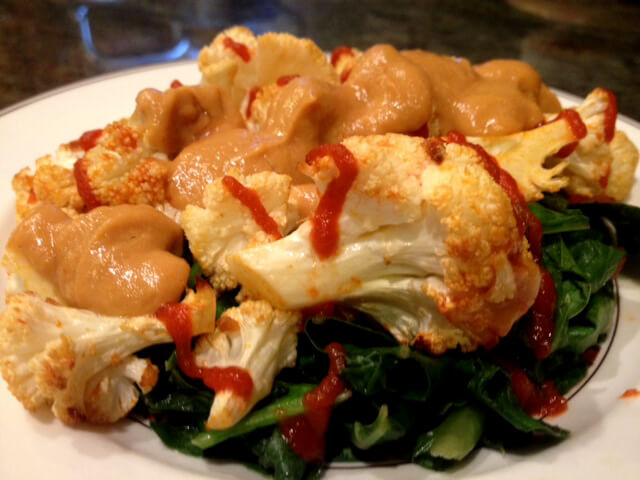 I’d made quinoa before, and while this was an easy preparation it never occurred to me to add things in while it was cooking. I don’t know why though, I guess it’s only because I never add anything to rice while it’s cooking and I make them the same way? The world may never know.

The only thing that was REALLY intimidating me throughout this experiment was the Peanut sauce. On Richa’s site the recipe originally called for almond butter, which I neglected to purchase. Luckily Richa mentioned that the almond butter could be substituted for with peanut butter! I love peanut butter!

I would definitely make this recipe again. It was a hit with everyone who tried it out and it was extraordinarily easy to make. I also think it has enough flavor but isn’t too intrusive so everyone can give it a taste without fear of disliking it. Thanks Richa! I will certainly be browsing her blog for more delicious recipes sometime soon.

*Note: I actually had extra food after making this meal, which was great! I saved some for Mr. Ian to bring to work for lunch, and the rest I saved for myself for lunch! The only thing I didn’t have leftover after giving Ian his portion was the collared greens, and this recipe is so simple that all I had to do was throw it in the pan with some garlic powder and oil and it was done in just a few minutes. I was so so pleased with the overall outcome of this dish. 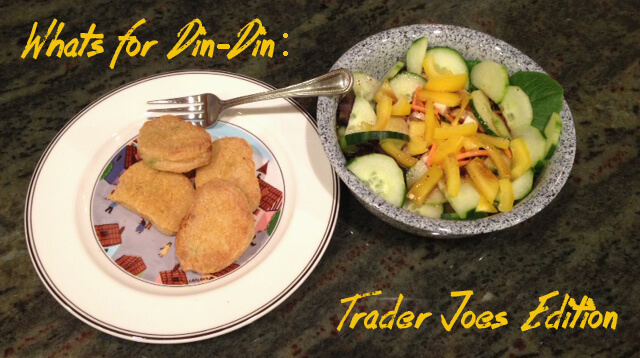 I feel as though you may all be getting the sense that Jenny is WAY more put-together than I am. I don’t always have the time to put delicious meals together (well, not AS delicious as Jen’s…but not bad!) and when I do I feel as if they just aren’t as grandiose or full of fresh farm ingredients. Not to say I don’t like eating healthy! I am also still living with my parents – so that sometimes makes the refrigerator situation a bit hectic. What I do know is that I enjoy cooking, but right now it’s just on a lower scale. As I was making my dinner (or “Din-Din” as the title would suggest) tonight I noticed that 99% of it came from Trader Joe’s, which just happens to be my favorite grocery store! They have great frozen food options, low prices, and I’m not worried about where the food is coming from. Their meats have a guarantee that they were free range and cruelty free throughout their lives (even though I am not buying meat anymore it is definitely something that I took note of) and they have a ton of vegan and vegetarian options around the store. I figured now would be as good a time as ever to start reviewing some of the food/products that I purchase from TJ’s all the time and spread the word of the great grocery deity. 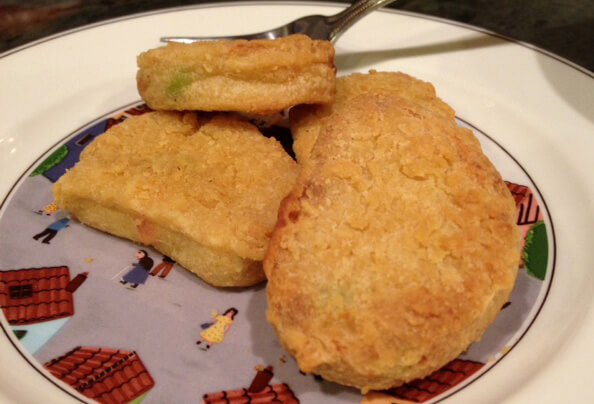 Living the childhood dream of eating nothing but nuggets.

The Nuggets: I picked these up on a whim one day as I was going through the frozen food section. I figured it was worth a shot and it looked as if they were easy to prepare and would be good to bring to work. Turns out – they’re pretty delicious! Even Mr. Ian likes them! I put them into my toaster oven for about 10 minutes and they get a nice crispy outer layer but are still soft on the inside, which includes tofu, carrots and edamame. These tofu nuggets are also great because they are really reasonably priced, I think the bag only cost me $3 or $4? I checked the bag for ingredients and noticed that it was certified vegetarian, not vegan though. As much as I wanted this to be a super simple vegan meal for MOFO … I failed. I tried guys I promise! You may not believe it… but there is DEFINITELY some lettuce under there!

The Salad: I want to start this off by saying that I wish I had a CSA near me or was able to go to more farmer’s markets. I love the idea of buying local produce and being able to use it all in my meals…but unfortunately I have to settle for now. When I go to TJ’s I usually end up getting a few different bagged lettuces (I know..it’s never really something I thought I would do!!) and they tend to be pretty solid for what they are. I like to get some darker and leafier greens because of their health value and mix it up with just a little bit of butter lettuce to make it a little crispier. This salad only contains mixed greens though! I also LOVE cucumber – so I accidentally cut up more than I originally planned on…woops!
Note: While I normally don’t buy much produce from Trader Joe’s (I find that it’s just not that great in quality and not very extensive so I go to the supermarket closer to my house for all of that) I will say that their cucumbers, yellow/red/green peppers, mushrooms and carrots are all good and delicious. I have never had any weird problems with them in the past and can feel comfortable that it won’t go bad in a day or so (I haven’t had great luck with their apples…). The Sauces: I love sriracha. I am surprised that this bottle has lasted me this long. I’m pretty sure that I use it for almost everything, and tonight was no exception! The mango ginger chutney sauce seems to be a fairly new product at Trader Joe’s, they has it EVERYWHERE the first time I picked it up. I love all of those flavors so I figured they would be 1) delicious together and 2) delicious on other things. It’s already a little bit spicy on its own, but I wanted more so I added the sriracha for that extra kick. Turns out it was a good choice! 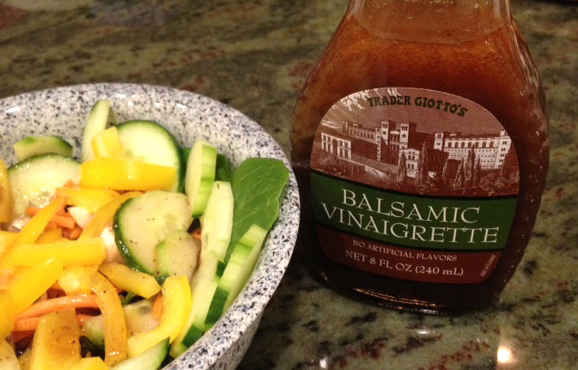 When I was younger I was never really a fan of any other dressing besides ranch…or any other creamy dressing. I think the flavors may have just been slightly too strong for me? Not too sure…but I haven’t had ranch in years because I found out that putting it on a salad is defeating the purpose of a salad! Trader Joe’s (Giotto’s??) balsamic is perfectly tart and savory, and it doesn’t have random floaty bits in it like some other balsamic dressings. Whenever I run out of it I go into panic mode because all of the other salad dressings in the house are mediocre at best.

So I guess it seems that it’s pretty obvious that I enjoy Trader Joe’s…if anyone else who reads loves it too let me know in the comments! If you have a favorite item I might go pick it up and review it here :). Life is too short to not try new things.