Any I.T. Crowd fans out there? I hope so because they are the theme of todays dish. My husband and I have been rewatching the series and I forgot how hilarious it is. I recently watched Fifty-Fifty where Jen and Roy take their dates to Messy Joe’s. The next day all I could think of was Moss’ gentle voice saying “Messijo” as I was eating my leftover sloppy joe sandwich. Then it clicked, sloppy joes are very messy, in fact you could call them messy joes. I should make my own Messijos by switching up a sloppy jo recipe! 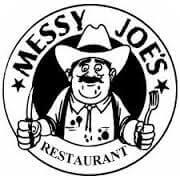 So I had to think what would take a very American dish and make it British. What about basing it around a british style curry? I tried looking for some of the premade British curry mixes, but none of the local stores had them. So I had to make it from scratch. The end result are four huge “messijos” or 6 smaller ones. The brilliance of sloppy joes is that it is pretty flexible so you can add more traditional peppers to the mix, or swap out TVP for lentils. And if you want to embody more of the IT spirit, you can start the dish by rubbing some chocolate on your forehead. It won’t really effect the taste of your messijos but it will give you a couple of laughs with your friends about how you have chocolate on your face, not shit. And then you can lick it off afterwards. Which is semi yummy.