Blog Recipe Round Up: Hot Chocolates

Depending where you are, this recipe roundup is either late or just in time. Anyone on the northern hemisphere is coming out of winter and are probably looking for iced tea recipes. But if you are in the southern hemisphere, you are probably dreaming of hot chocolate and lattes. This post right now is for you guys. 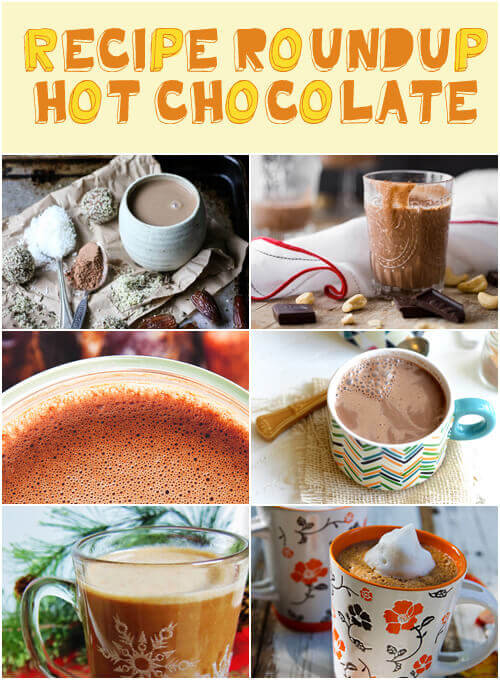 This sounded super yummy and low in fat. Sometimes I don’t like how rich hot cocoa can be. Emily uses coconut to make the milk base, and uses ginger tea and cinnamon to add flavor. The end result tastes great, I love how you get a kind-of chocolate chai drink. But, I found that even with long blending, the coconut didn’t blend all the way. If I made this again, I would probably toss the coconut in while the tea was brewing.

I love the idea of being able to make hot cocoa from scratch instead of using mixes. Most mixes have dairy in it so why not just make it from scratch? This recipe uses an actual chunk of chocolate, making the drink incredibly rich. And if that isn’t enough, she uses a little cocoa powder as a big double punch. The biggest downside? It makes more than just one serving. I probably have “two servings” and added the rest in a smoothie for my husband to make sure it didn’t go bad.

Bottom Line: Whoa so perfect- hope you have friends to share with

I wanted to love this recipe so badly, I mean come on guise?! Nutella AND hot chocolate? Well, it was pretty good, but I think it could of improved. The drink was too bitter, and probably needed a little more sweetener. I probably would of also included some melted chocolate to the recipe, mostly because if the name is going to include nutella, I want it to be RICH!

Positives? The recipe is super easy to cut in half, if you don’t want to make four servings (let’s face it is more like two or three servings). The drink was really smooth, which I liked as well.

Bottom Line: Good, want it to be richer

This recipe is pretty simple, milk, chocolate, and chai mix. Luckily, it links to another part of the blog that gives a recipe for a homemade chai spice mix. The mix is okay, focusing mostly on ginger, which I though was weird since I smell more cardamom than ginger in chai teas. This is easily overlooked with the final product, I can barely taste the ginger! The recipe is alright, the chai spices give an interesting variation to hot chocolate, but I found myself adding more sweetener to my hot chocolate.

I feel like I have a sneaking hunch that there might be a misprint in the recipe, because my drink didn’t look like hers and had too much of a chocolate taste. The drink was really bitter, and I found myself adding the max suggested maple syrup AND some liquid stevia. I think if I divided the chocolate in half, meaning 1/8th of a cup for two servings, instead of 1/4th, I would be much happier with this drink. The plus? It was easy to halve, and therefore making only one for me. It is easy to make whenever, just add ingredients and enjoy. I cheated and used store bought coconut milk that is in the refrigerator non-dairy milk section (instead of making a raw-homemade version).

This hot chocolate has an nice thick creamy body. It is so thick and creamy from the pumpkin puree, not from fats. The drink isn’t too bitter, but leaves too much open ended with how much to sweeten the drink. I like having defined measurements sometimes, if anything suggested amounts. The overall drink didn’t scream pumpkin or pumpkin spice. In fact, I probably would ditch the pumpkin spice, and just leave as is. The pumpkin got overwhelmed by the chocolate, and I am okay with that. As mentioned the pumpkin did much more for the body and texture of the drink.