Tag Archives: But I Could Never Go Vegan 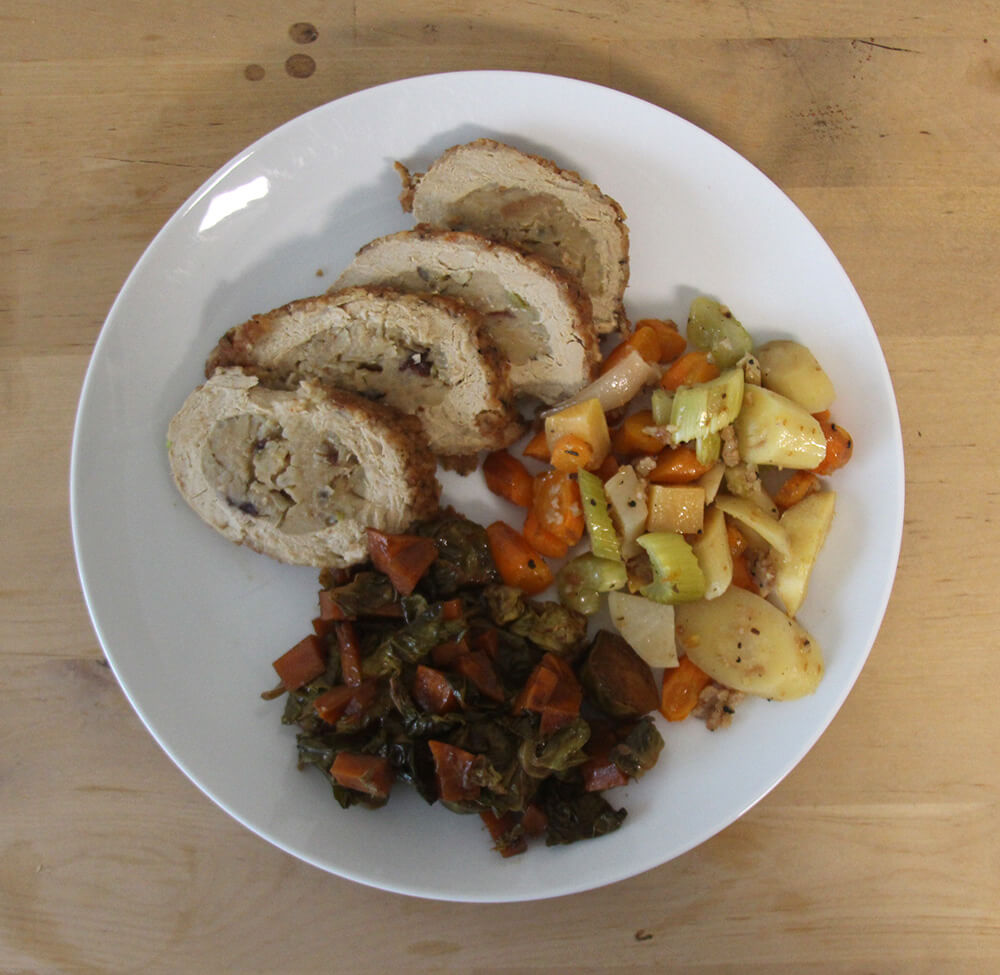 I am finally feeling like I am starting to get my shit together. Sort of. I’ve been actually doing pretty well with Vegan MOFO, and one prompt Alexa was going to write up something but sadly she has been having computer problems. But even still, so far we got a post up everyday, except for one. Last year we missed 3 posts, so maybe this year we will only miss 1 (maybe 2.) Last night I was starting to wonder if my water broke (despite what you see on TV, it isn’t a huge splash) but by the next morning it was very clear it didn’t. At first I was freaking out that nothing was ready. So this weekend I might focus on making phone calls and getting things in order.

Well, I didn’t go into labor, which is good. I still have three weekends to get the nursery totally settled in (so close guys!) and I will be spending family bonding time before the big day.

I think I’ve mentioned in every single Thanksgiving Day themed post, that I don’t like the holiday. Frankly I don’t like the food much. Cranberry sauce? Why are we eating plain jam? Mashed Potatoes? What is this baby food? Pies? Meh, give me cake.  I mean it is all find an dandy but I think it marks the beginning of the a marathon of holiday foods that all taste the same. Lots of thyme, rosemary, umami, and root veggies. Meh. I think that is why family does Mexican Christmas Eve. But my husband LOVES the food and holiday. So that means I feed into his love of mashed potatoes and pie even though I would rather not. 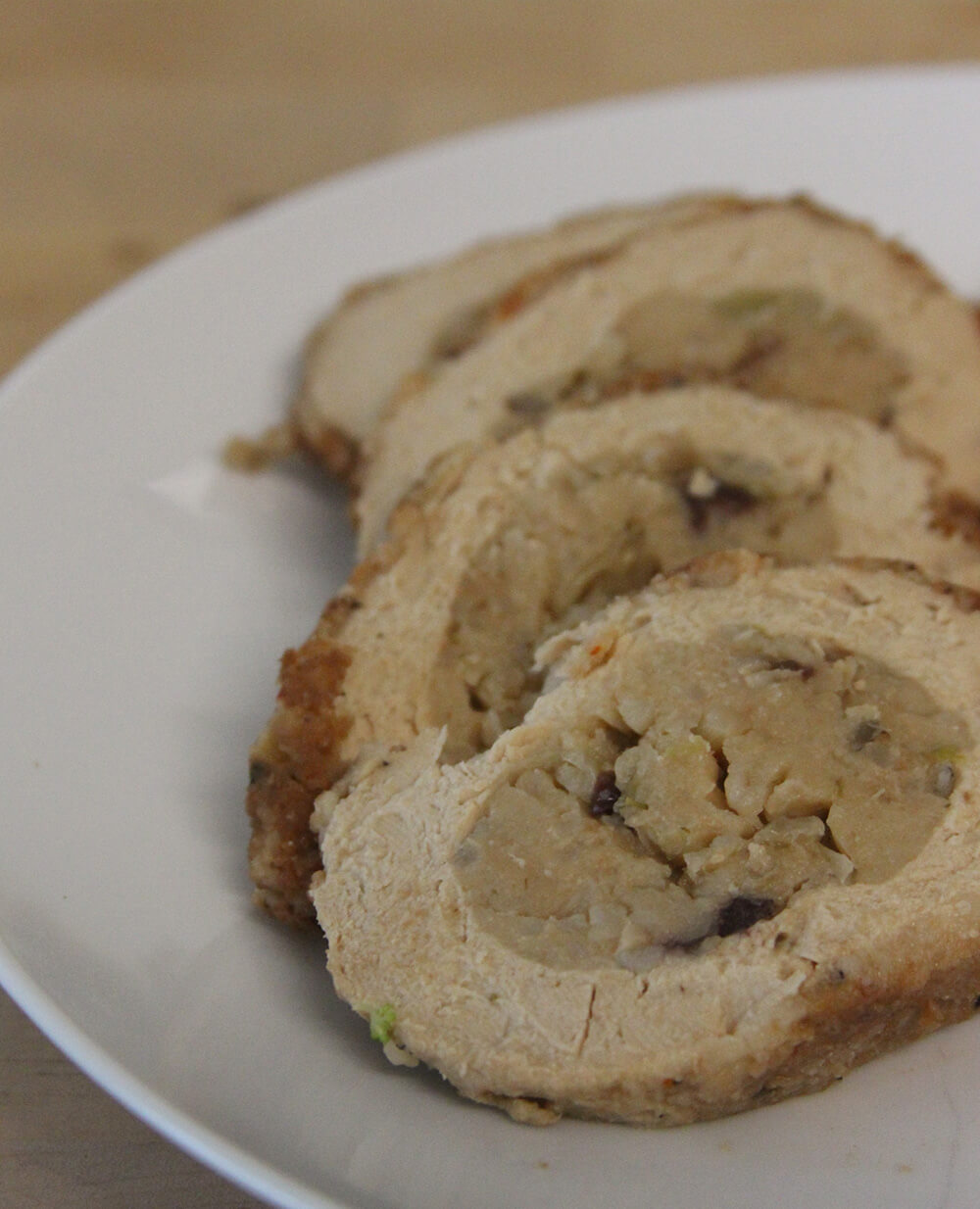 And even more luckily for him, his office has an office Thanksgiving lunch. He use to eat whatever they had before he went vegan. But this is the third celebration since he decided to go vegan. So we started a “pre-thanksgiving” tradition. Every year, before his office party we make a frozen “faux turkey” roast with one or two vegetable sides. We’ve tried tofurky, but so far my favorite has been the Gardein/Trader Joe’s holiday roast. Plus, the Trader Joe’s “brand” is cheaper, though it is really just Gardein with Trader Joe smacked on the outside. I’m cool with that.

This year we kept it pretty simple, we took some vegetables from our CSA and followed the instructions for a big roast. This gave us MUCH more veggies than we first anticipated. So we had some roasted turnips, parsnips, carrots, and celery (not from our CSA.) We then made a side of But I Could Never Go Vegan‘s sweet potato and brussel sprouts dish. The sprouts were from out CSA, which didn’t do too hot this year. Our stalk was more greens than sprouts, so we saved all of those and will probably do a little side with them another day.

This year Jon found out one of his co-workers is actually vegan (we thought he was just vegetarian.) So next year if they are both still working there, I will probably be making a bigger spread to bring in and share with his co-workers. Apparently other people at the office were commenting on how good the food looked. 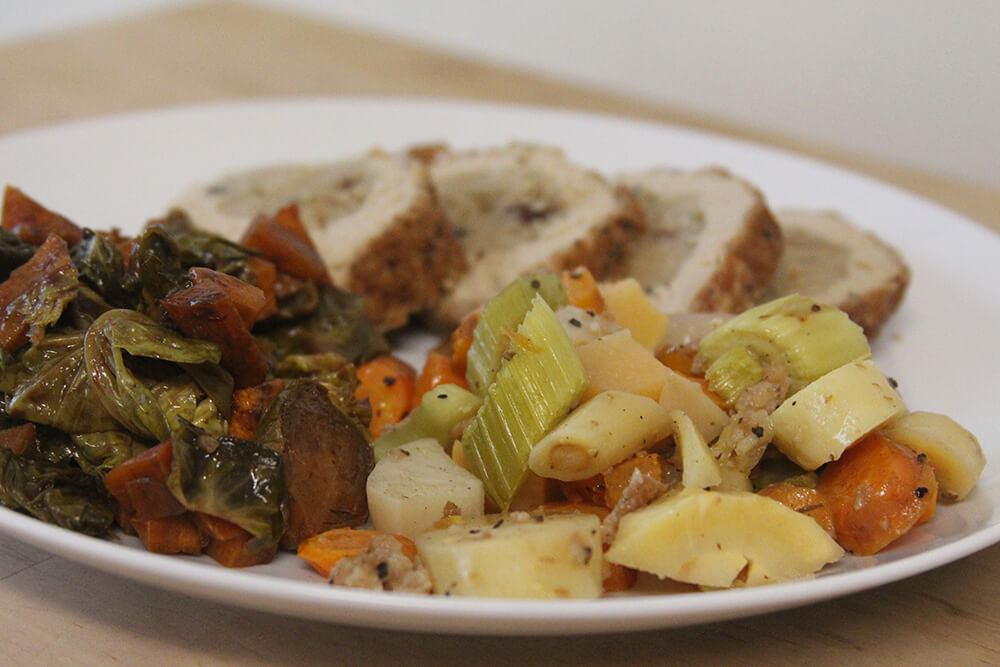 Usually we get by for the rest of the week not cooking anything, which is totally okay with me. Leftovers all week leading up to the big cooking holiday? Okay! Actually I do cook, just usually things we aren’t going to eat. Like I cooked a whole pound of chickpeas (to make two chickpea tarts, one for thanksgiving, one for post baby), bake an apple pie, bake a pumpkin pie, you know, prep work.

If anyone wants to know, I’ve made a few other Thanksgiving posts- you can check them out if you so please:

Our Thanksgiving 2015 Plan
Our Thanksgiving Dinner 2014
Recipe for Vegan Green Bean Casserole
How to Serve a Vegan Guest for Your Holiday Dinner
Tofurky or Not Tofurky? That is the Question.

Anyone else with a Pre-Thanksgiving or Friendsgiving tradition?

But I Could Never Go Vegan Review 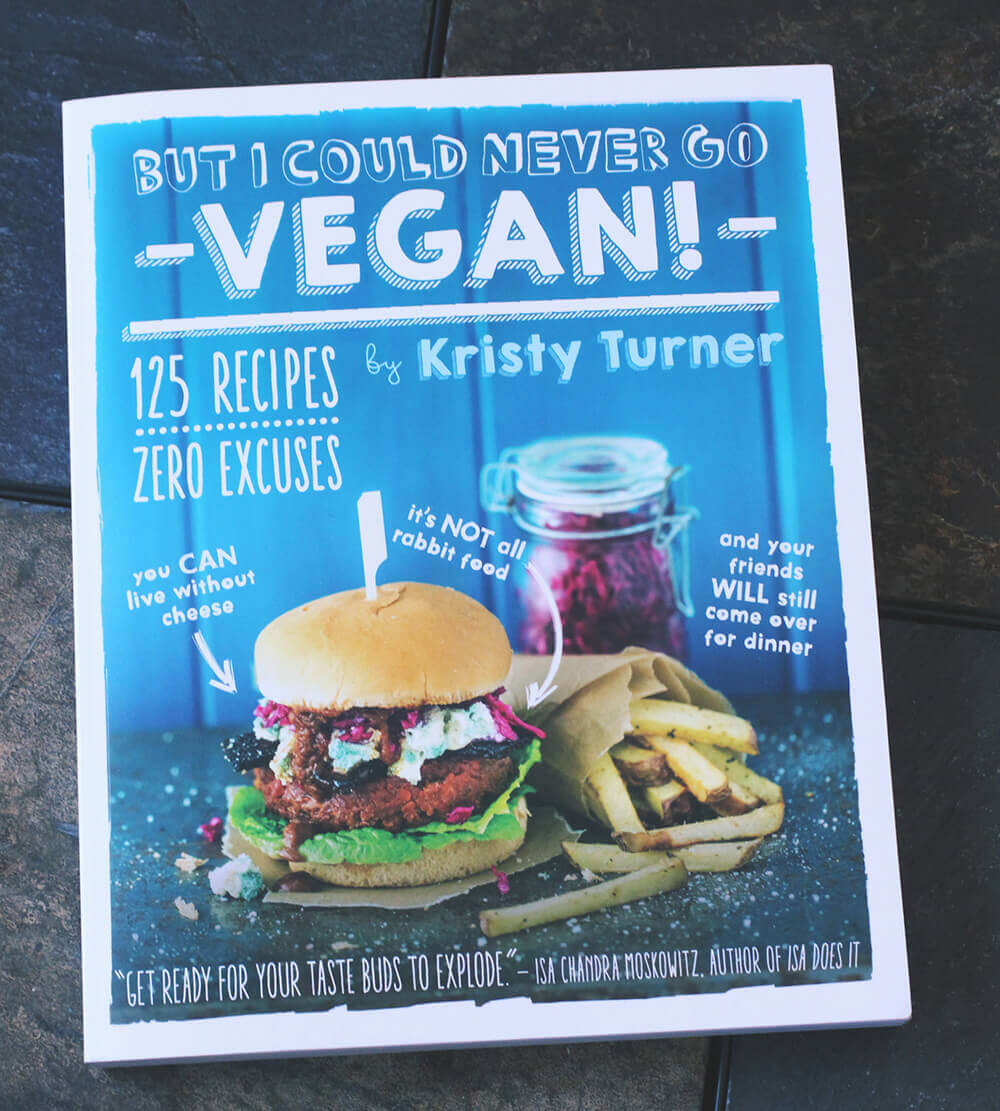 Back in December I entered a book giveaway on a blog, and won. A few weeks later I got a copy of But I Could Never Go Vegan directly from the publishers. Before the book, I wasn’t really familiar with the blog Keepin It Kind. I might of stumbled on the page once or twice, but never really read the website in depth. So I read this book from the point of view of an established vegan who had never heard of the author before. I read the book with any knowing the author’s preference of foods, styles, and writing.

There are photos for, I think, every recipe in the book. If the photo isn’t next to the recipe there is a reference number to where you could find the photo, usually found on the chapter dividers. This gives the reader plenty of visual inspiration, and a good look at the food to figure out if you totally fudged up a recipe. I think this is great since this is a book for new vegans. If you haven’t done lots of cooking with vegan foods, it can be hard to imagine what the end result will be, and might discourage people from making a recipe (I know it did when I first started going vegan). 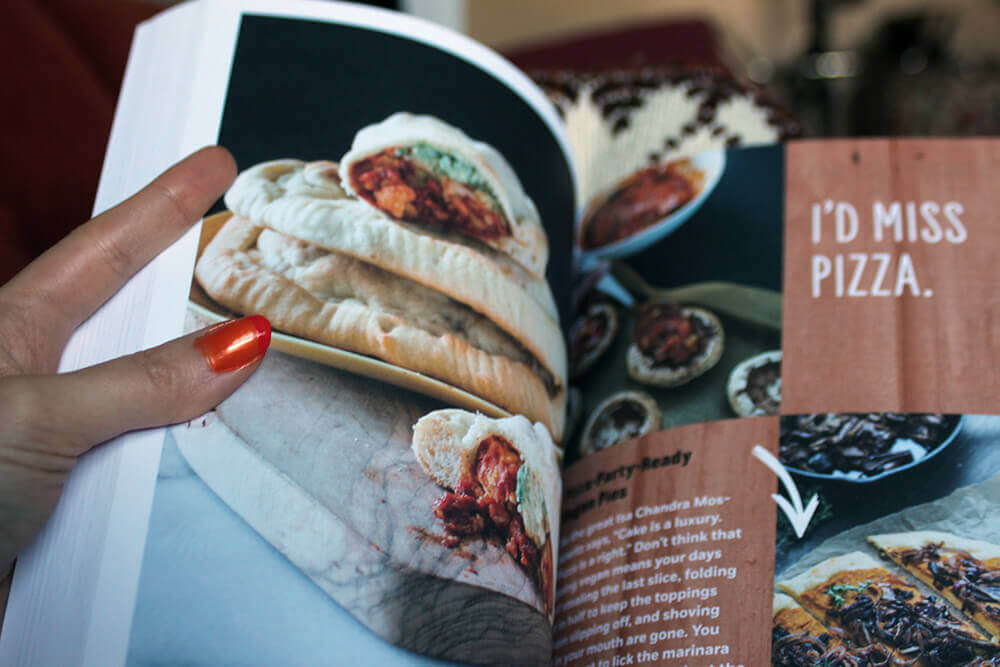 The book starts with a brief introduction. Although this is a book targeted to new vegans or flexatarians, there is little information about actual veganism. I don’t think this is a bad thing. If you are picking up this book, you probably know the basics. What Turner does is talk about the lesser known vegan foods, like for example she covers why sugar isn’t vegan.

Each chapter is organized by a common excuse for not being vegan, but I could never give up cheese, substitutes are too expensive, etc. Now this idea is fun and novel, but I was worried how well it would “work.” When picking out recipes I am usually concerned with using up a certain ingredient before it goes bad, or trying to find a soup to balance out the menu for the week. Surely how helpful will this new organization system be?

It wasn’t until I hit the chapter called “But Nobody Will Come Over to Eat!” that’s when it all clicked. This book in some ways is more helpful this way. I found myself thinking “next family get together I should make all these recipes.” As a new or veteran vegan you might hit a bump in the road thinking about what to make for brunch, to serve for a family get together, or have a longing for cheese, and you just need to open to those chapters. That said some of these chapters would be made this way regardless in a normal cookbook, they just have a witty name. And I am still a little annoyed to find a smoothie randomly placed in a chapter mostly filled with dinner dishes. But this system sets a new vegan up for random experimentation rather than meal planning, which can be pretty fun for the reader.

What I like about books by bloggers is that the writing style is informal and feels like they are talking to you personally. Without knowing the Keepin It Kind blog, I could easily recognize a specific voice in the book. In fact, once I started to follow the blog after picking up the book, I can say I think the book reads better than the blog.

Errors seem to be non-existant, or hard to find. The only one I know about Kristy addresses on her blog. For the Jackfruit Nacho Supreme the published recipe calls for 2 teaspoons of agar-agar when it should call for 2 tablespoons. I would assume there will be a correction in the second pressing. Otherwise, everything seems pretty solid.

This book is great, I find it great for days where you want to cook or bake to enjoy yourself. Some recipes work well during a busy weekday, but most recipes call for a little planning or a little extra time. The book still needs the reader to flip through with an open mind. It might be a little hard to “choose” things if you are looking for just a pasta dish, or something that uses chickpeas. This is a cookbook for someone who is adventurous, or doesn’t mind a spur of the moment trip to the grocery store.

There is only two complaint about this book, one is an odd odor. This is pretty silly to point out, but it is rather odd and off putting when flipping through a book full of food. I have never picked up a book with this odd odor before, and I think I am more curious about what that smell is more than anything. Anyone have a clue?

My second complaint is more a worry. I think the people who will benefit the most from this book are flexitarians, or family and friends who are trying to understand their vegan friend. Mothers who are trying to tailor dinner time for vegans and omnivores might find this book handy. My biggest worry is if this book will sell to these people. Sure it is fun to pick it up as a vegan, but the chapters are just something fun rather than helpful. I think this book has a lot of potential to reach and convert a lot people, and I hope it does. So my “problem” with this book is more about if it was properly marketed and is reaching people who want to eat more plant based foods.

As with most cookbooks, I tried my best to try a recipe from as many sections as possible. This will hopefully give an idea of any particular strengths in the recipe selection. But there were so many sections in this book that I could only cover some  of the recipes. If there was any recipes posted online to promote the book, I left a link.
END_OF_DOCUMENT_TOKEN_TO_BE_REPLACED