What I Ate Wednesday #1

I really like reading posts that people do of “what I ate” posts, whether it is for the day, week, lately, whatever. I figured, some people are wondering what I pregnant vegan eats in a day, so I thought I would try really hard to take a photo of my food before gobbling it all up. And share some of the nutritional information. 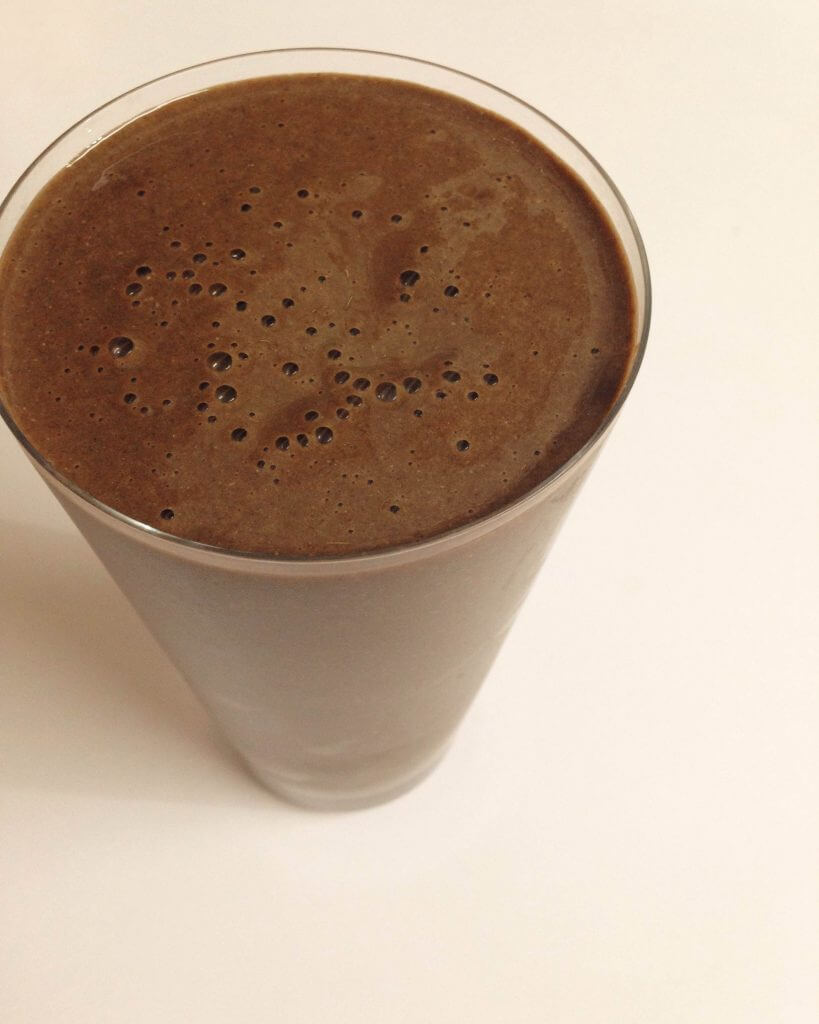 Almost every single day has been a chocolate banana shake since I found out that I am pregnant. I was using spirulina (and chocolate) in the shake to up my iron, but the powder spirulina ended up being more expensive than the tablets, so I am making the switch. Which has been nice because I rarely have a “pure” chocolate shake. It’s always spirulina chocolate, fruit and chocolate, peanut butter and chocolate, etc. It’s made with soy milk, chia seeds, collard greens, some greens powder I got from Vegan Cuts, brown rice and pea protein. 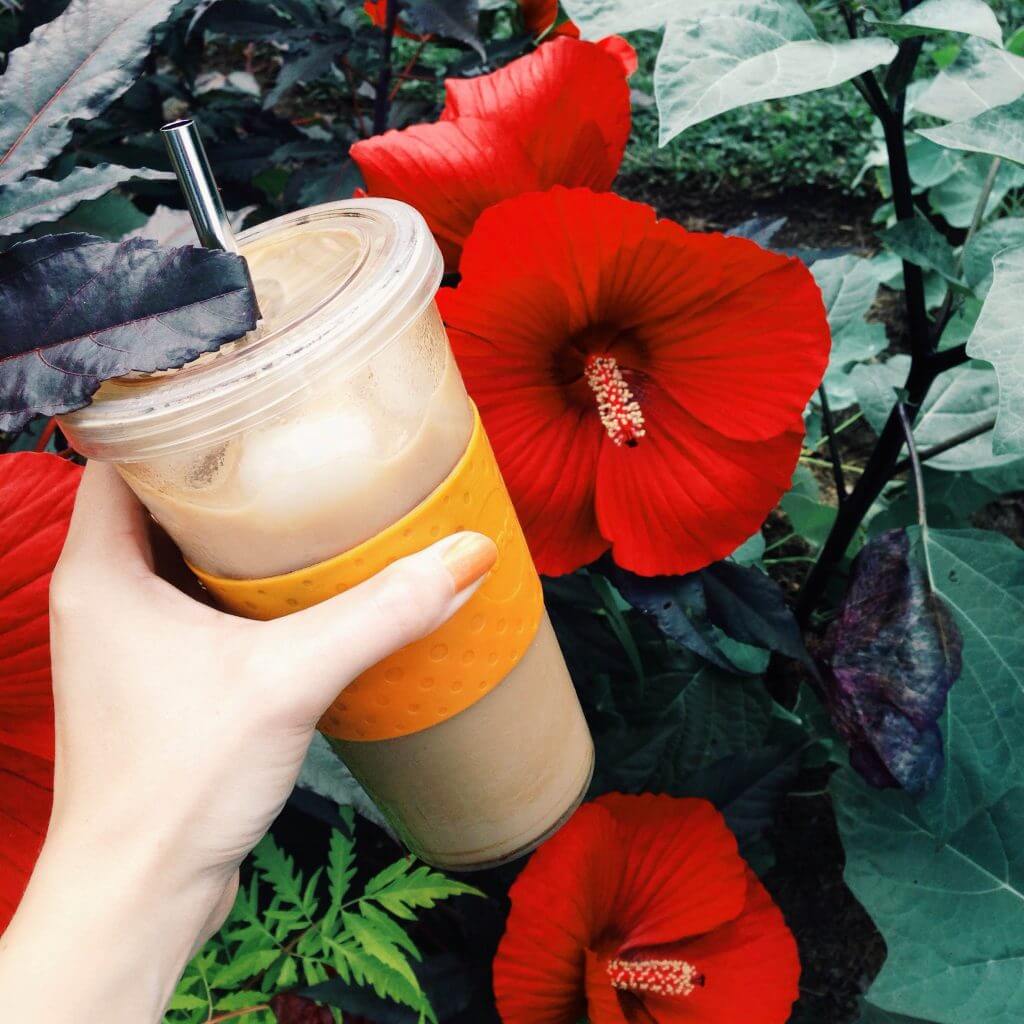 Before heading to work I made myself a small iced cafe au lait. I had leftover coffee from Rook and added some soy milk since I keep hearing how I need so much calcium. So I figured why not? Snapped a quick picture next to the flowers at my work’s garden. It seems nice and quite but there was a lot of construction going on. My boss is building a deck for her backyard and is laying lots of new cement around the building, so today was a little crazy. 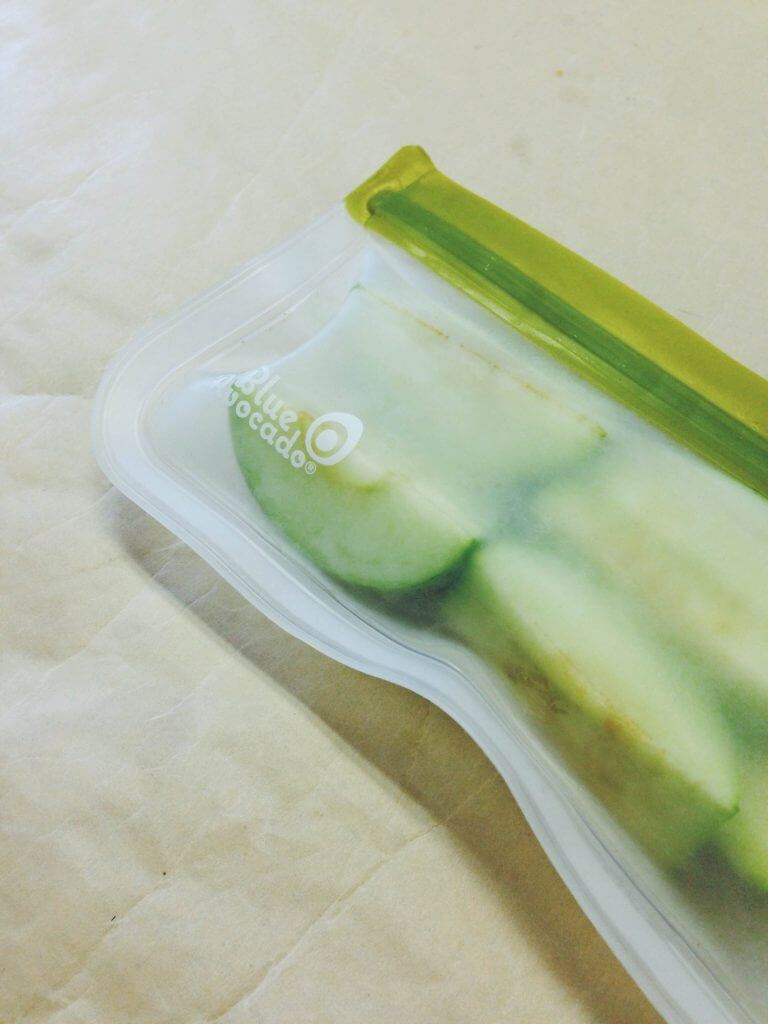 Since work was pretty all over the place, I didn’t even notice how hungry I was and had a late lunch. I had a green apple, which I always pre-chop and stashed in a Blue Avocado baggie. I love these reusable bag, because unlike Lunch Skins, these baggies have a zip seal so they are perfect for holding fruits and veggies. Sorry if I sound like they a sponsoring me, but I just really love these bags. Although if Blue Avocado approached me…. ^__~ 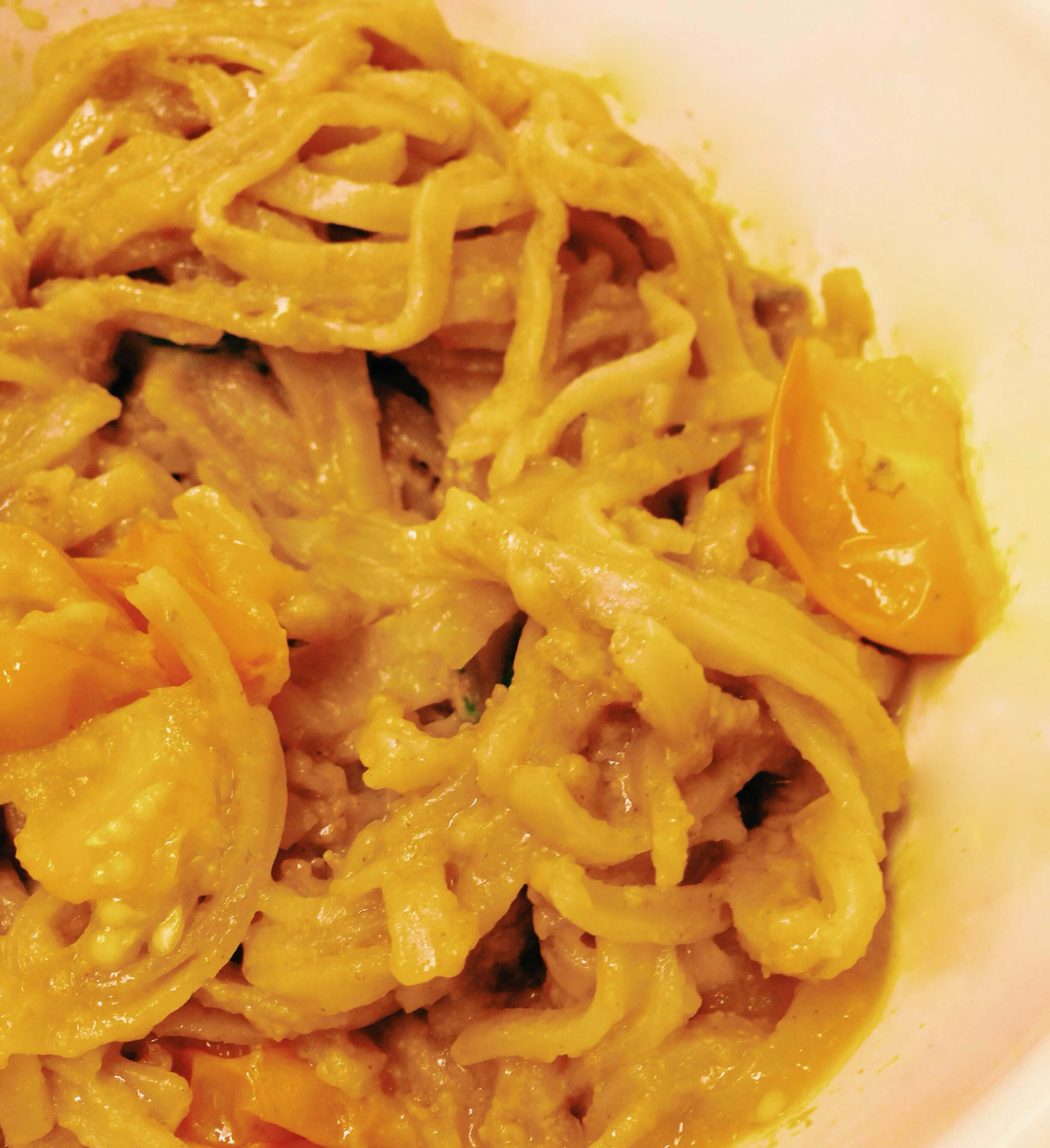 Clearly I didn’t JUST eat an apple for lunch. I also had some leftover Dragon Noodle Salad from Isa Does It. Since rice noodles get hard the next day I ate it hot, and tossed in a few cherry tomatoes from my CSA since I wasn’t eating it over lettuce. It is by far NOT the most attractive dish to take a photo of, but it is pretty tasty. And I even got to use brown rice noodles, so I get a little credit for a whole grain right? 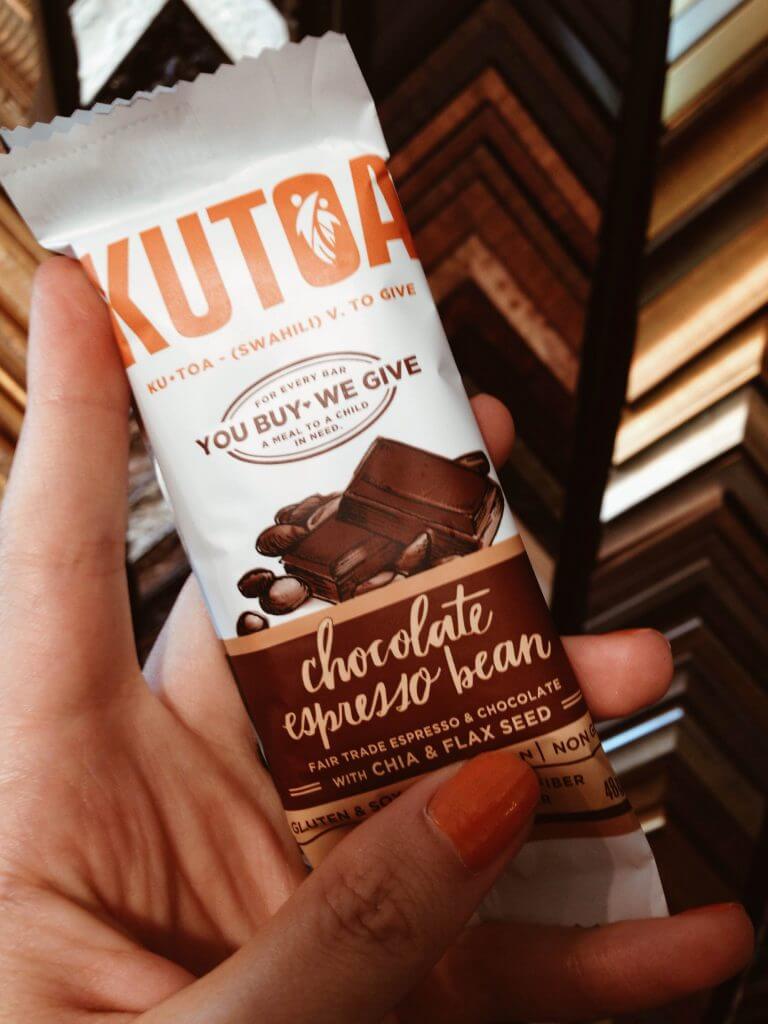 Then around three I was starting to get crabby, and was like “oh yeah, I’m hungry again.” Jon got me three months worth of Vegan Cuts boxes as birthday gift, joking that I would be a snacking monster. He was kind-of right. Each time I got one I took all the snacks and brought them into work to eat when I was running on empty. I picked this bar by Kutoa, and I’ve never had one before. It was pretty good, I liked how it wasn’t too sweet, and had some crunch from the chia seeds. 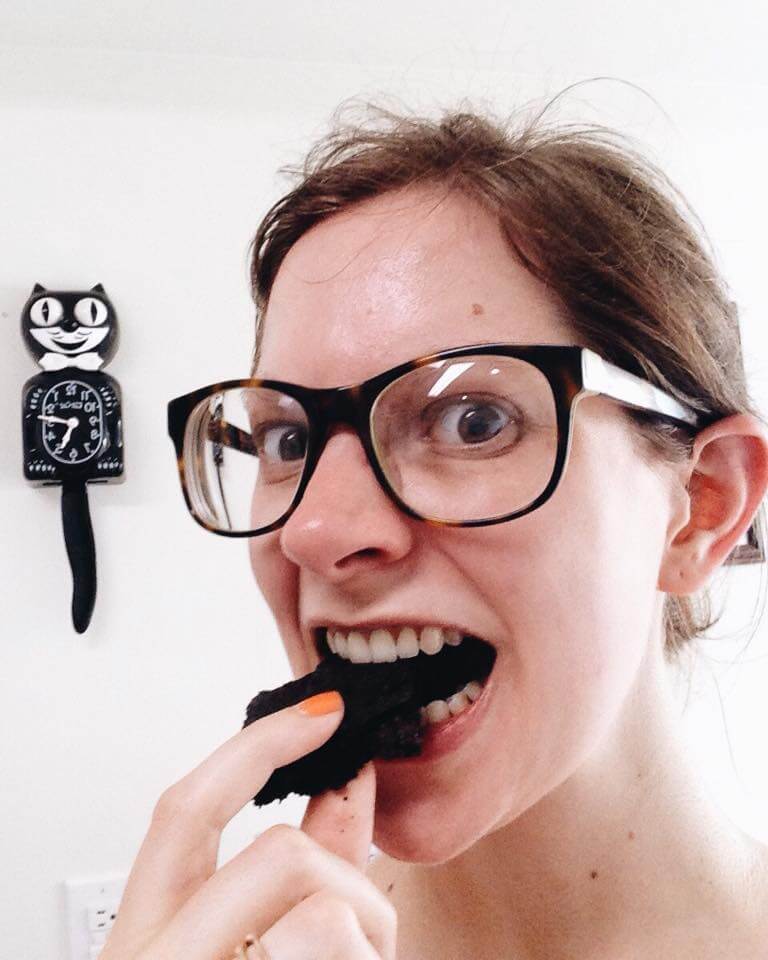 When I got home I went for two mile run (about 3o minutes) and was hot sweaty, and still hungry. I quickly gobbled up a black bean brownie from Minimalistic Baker and took a shower. This mostly was just to hold me off while I took a shower and finished up dinner. 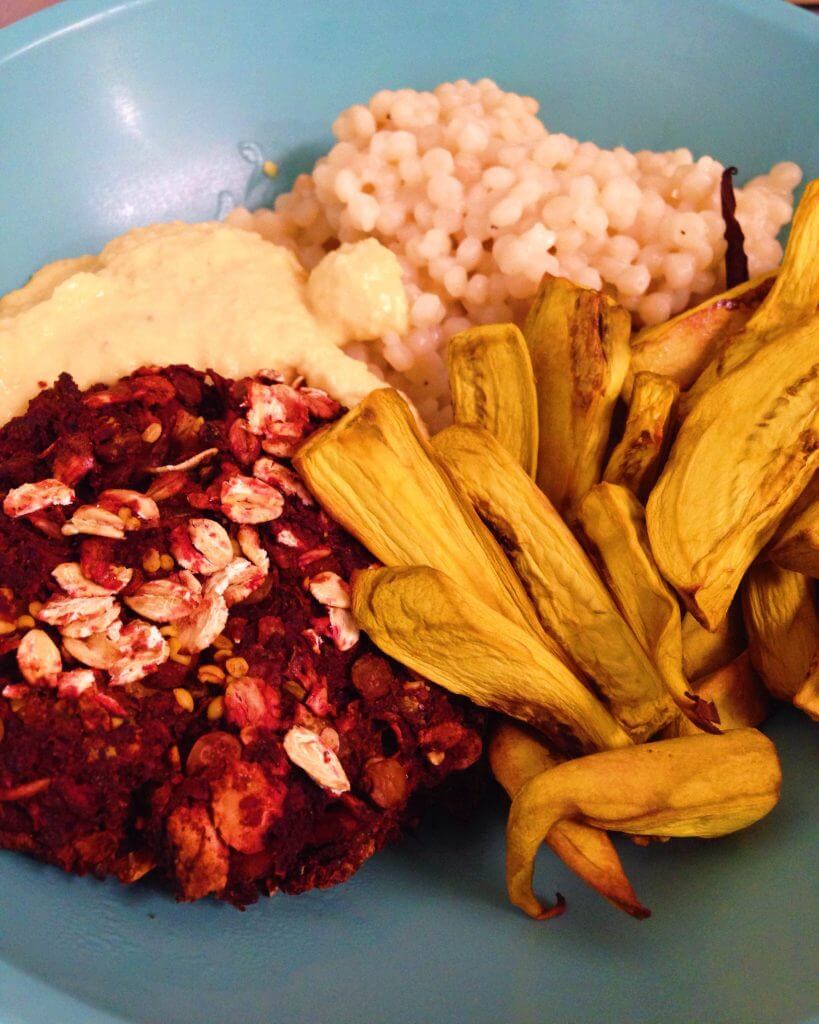 So what’s for dinner? I prepped some pickled eggplant on Monday specifically for this Hummus Bowl dish. Jon and I aren’t big eggplant fans, but our CSA is kind-of having a weak year combined with they are transitioning from spring crops to summer crops. Every year it’s a little slim picking at this time, but this year seems notably bad. So I picked an eggplant, and figured I would try the pickling and roasting method. It has been… interesting? The whole bowl was a little too acidic overall, at least for acid reflux prone pregnant me. I made the hummus as instructed on the site, and tossed the couscous in some soy yogurt. Since I didn’t have any falafels, I used some frozen hemp beet burgers from Protein Ninja. 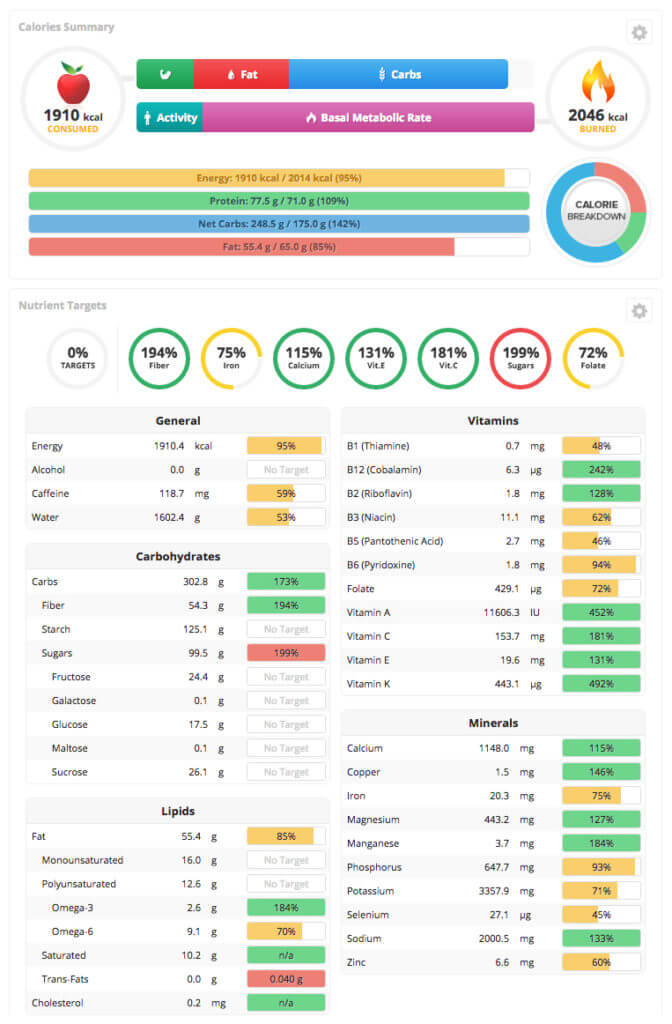 So what does all this food look like nutrition wise? Well, I do plan on eating more. I just haven’t picked out what yet. Bagel with tofutti cream cheese? Maybe. Homemade purple basil ice cream with blackberries? Very possible. Wegman brand oreos? Yeah, that might happen too. So some of the stats are wrong, I am probably adding another 300-400 calories to my day. Plus, I am not getting the specifics for the bar I ate, and I just used a generic hummus instead of plugging all the ingredients in Cronometer. It isn’t perfect guys. But it gives you a general idea of nutritional intake. I excluded the shot of protein because I hit 100% on all the specifics, BORING.

Clearly I am not quite hitting all the B Vitamins I need, but if I eat the bagel with tofutti cream cheese I’ll end up hitting all my nutritional requirements. I was low on iron today, because well, I am not including spirulina in my diet like I use to. I am waiting for my tablets to arrive in the mail. But if I eat a bagel, I should get 100%. I have hit my requirements for vitamin C and calcium which are also common things that people stress about with diets for pregnant women.

Also, take note that I am using Cronometer to track my nutritional intake. Their information is only so accurate. Some foods don’t have all the nutritional information available. I also selected an option that changes my nutritional requirements. It recommends I have a food intake of roughly 2,000 calories, and I usually ignore that suggestion and go for more.