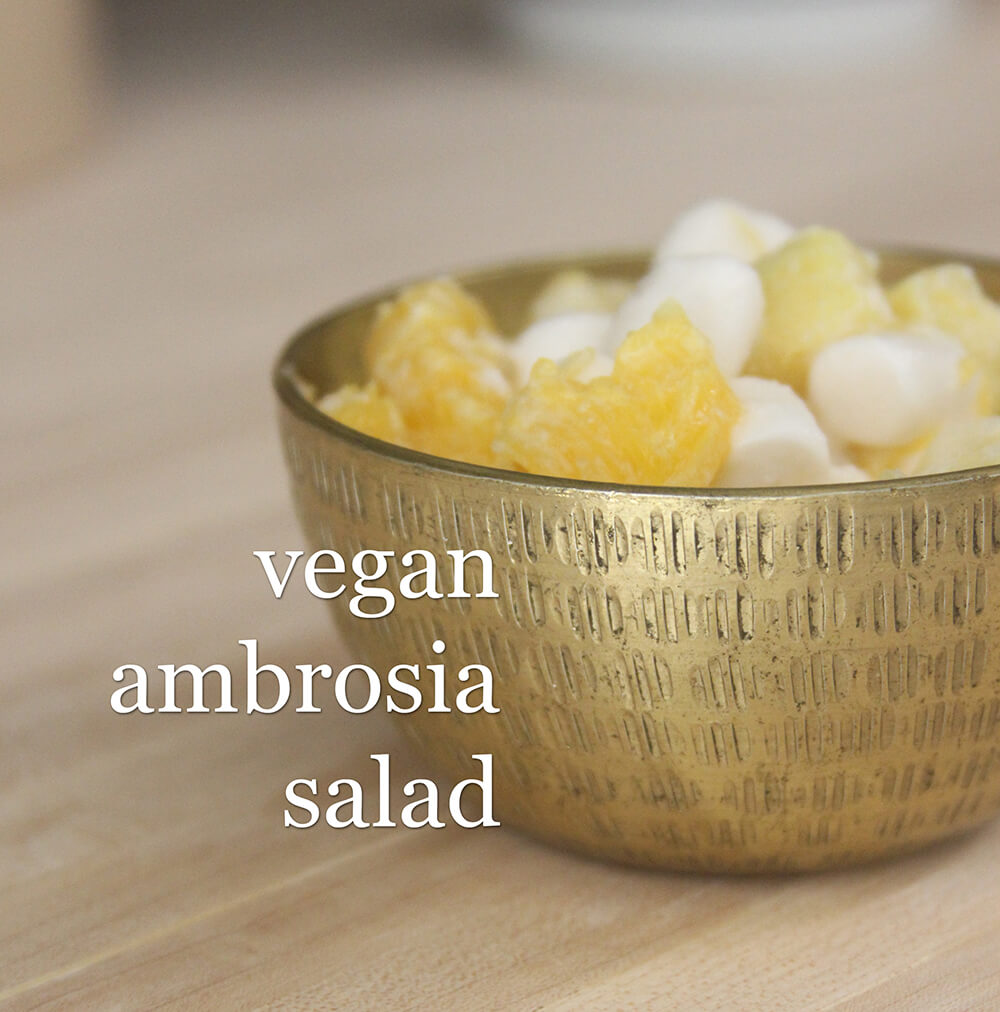 When I first tackled on my American Cakes challenge last year, I was overwhelmed with excitement. Ideas where flying through my head on what to try, and I was excited to learn more about American classics. I quickly started to learn more about our history than just cakes. Sure there were a few pies in the book, including a shoo fly pie, but I was learning about green tomato pies and vinegar pies. I am hoping to make these this year, but it got me thinking, what other desserts are very American? And that’s when I swallowed my fears and looked up a recipe for Ambrosia Salad.

Let’s be clear- this is hardly a salad. At the very least, not a salad by any modern sense. The word salad was used more loosely in the past than it is today. So loose that it was often used for various aspics using vegetables. Heck, even the term Jello Salad comes up as type of dessert on Wikipedia. So I will swallow my pride, and delve into this piece of American cuisine, and besides, I remember these desserts always tasting better than it looked. 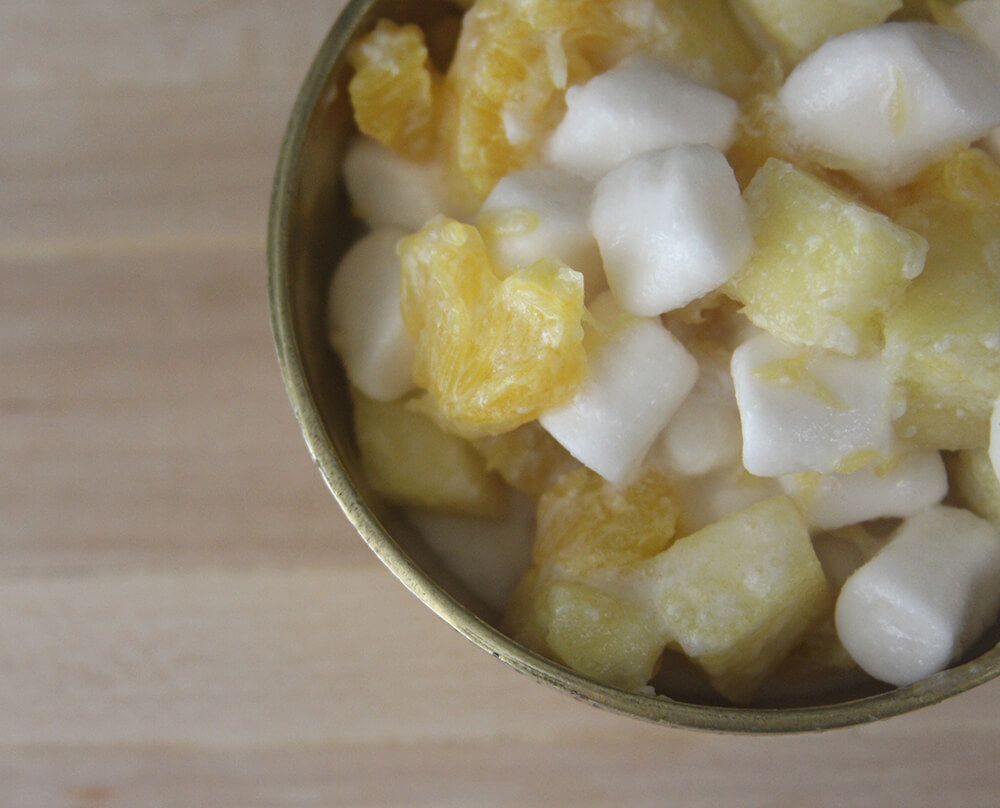 Unlike a Jello Salad, Ambrosia has no gelatin, but it kind-of gets clumped together. The origins of this dessert seems much more classy. The original recipe from 1867 was pretty simple- grate fresh coconut and toss with some sugar. Layer the coconut with orange segments and serve in dessert dishes. The name came from Greek mythology, as ambrosia was food for the gods, and they would grow weak without it. The dish would most likely be served during the winter, and I could see this simple dish tasting refreshing and sweet after having no fresh fruit for so long.

But times change, and so did fruit production. The United States started to increase it’s production of citruses, making them cheaper. Canned fruit became much more common and cheaper for people, so using canned fruit became more common place, and naturally, pineapple started to make an appearance. Some recipes asked for whipped cream, booze, or just tossed with heavy cream. And by the 1900s, various different fruit started to get mixed it, ranging from strawberries to bananas to cherries.

This was around the time when ambrosia started to become a Christmas thing. Let it be known, not all American make ambrosia for the holiday season. I never even heard of this until now, so don’t ask your American friend if they got their marshmallows for their yule tide salad. This is mostly a tradition in the South, and by 1930s, it became common knowledge that this is a Southern tradition. 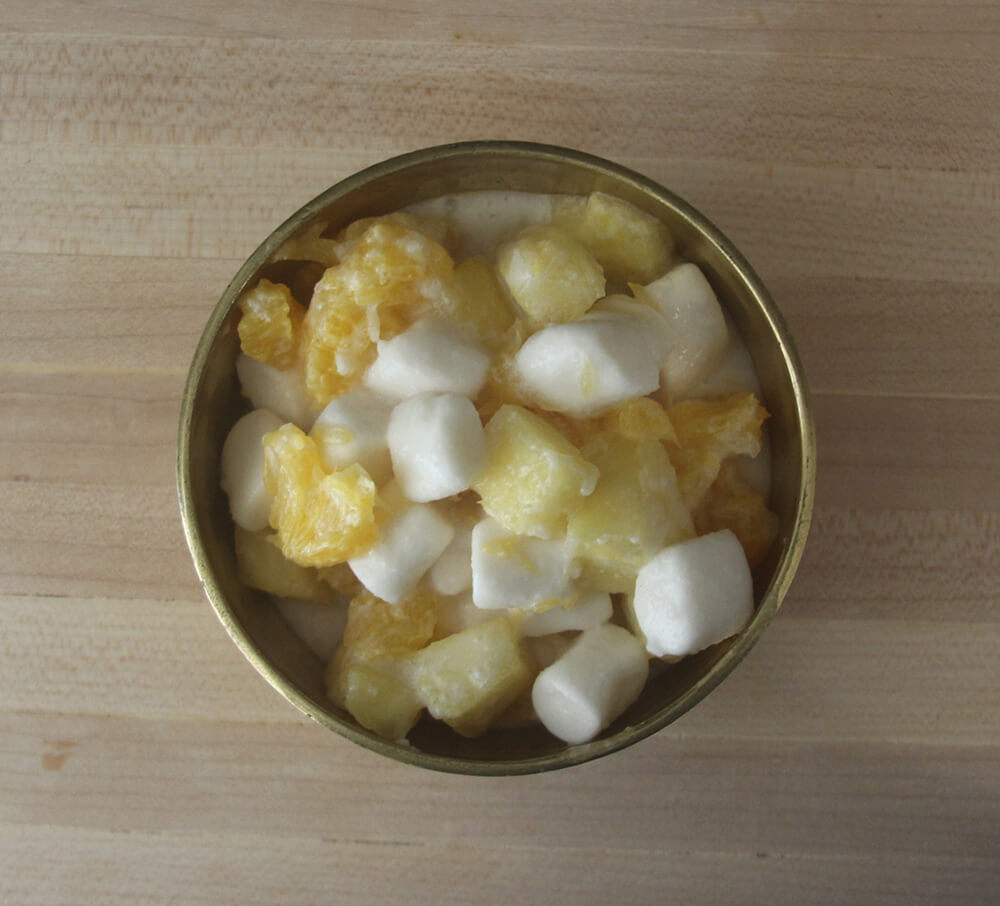 Today, the dish has a million variations. Heck there is a recipe in How It All Vegan that uses tofu, orange juice, and a whole basket full of fruit. Some people stick to it’s very traditional fruit salad roots, and some people make a molded dish with it. There are recipes for a baked salad, and some recipes use mayo. The dish has gotten quite a bad rep, coming up in the ranks with fruitcake. So many chefs are trying to reinvent ambrosia. Some are simple enough, using fresh fruit again, some involve a very loose interpretation of soup, and one person it means “fresh grapefruit and navel oranges, chopped celery, avocado, and cucumber flavored with fresh basil and jalapeno and tossed in a buttermilk-lime dressing with two tablespoons of shredded coconut.” Too much of a stretch to me.

So what the heck am I making? It seems the common thread with this dish are usually tied to these ingredients- whipped cream, marshmallows, pineapple, coconut, and oranges. So that’s what I did. I ditched the shredded coconut and used coconut milk as the whipped cream. Sadly, I can figure out HOW to get coconut creme to whip up. No clue what I am doing wrong. BUT that is okay, having a sweetened coconut coating is still yummy. I also ditched the canned fruit and used fresh. It’ll cost you more, but totally worth it. 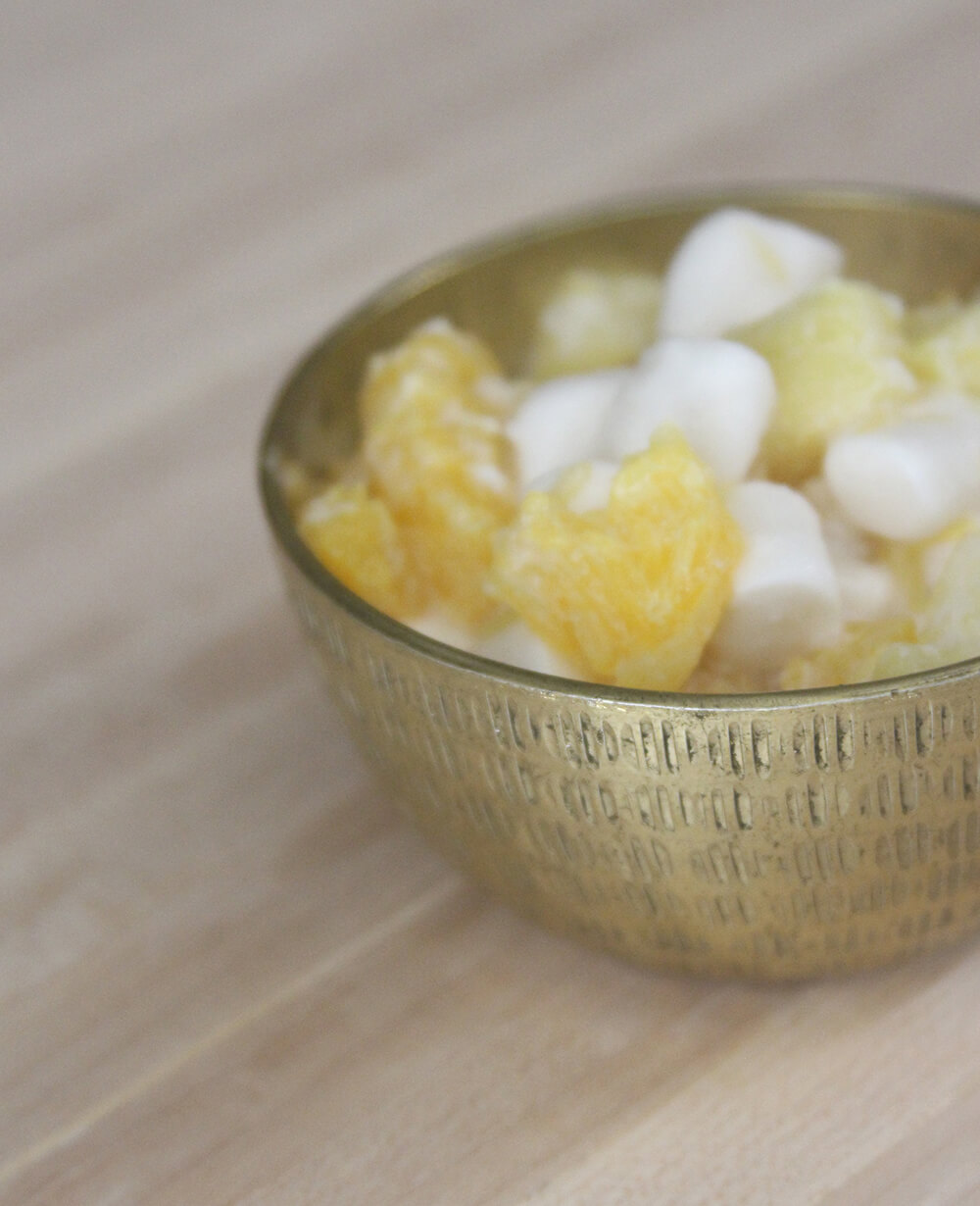 Now, if you can’t find mini marshmallows, leave them out. But I figured if Alton Brown includes marshmallows, then dang it, they stay in. Luckily I only us HALF a bag of marshmallows, so that won’t be TOO expensive. The downfall is that this salad doesn’t last too long. The coconut milk will slowly soften the marshmallows, making it yummy, but wait too long, it’ll make it mushy. So I suggest making this the morning of, perhaps for a potluck or family get together. I honestly think it won’t last long, but if you have leftover, gobble it all up the next day. 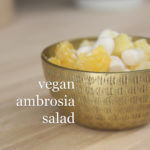 Vegan Ambrosia Salad
2018-09-21 05:41:02
A vegan version of ambrosia salad that doesn't use too many "fake" store bought products. Well, except for the marshmallows
Write a review
Save Recipe
Print
Ingredients
Instructions
By Jennifer Remsa
One Raw Bite https://one-sonic-bite.com/