There has been a lot of buzz about Sailor Moon Crystal, the newest installment in the Sailor Moon franchise. Naturally when the show aired, we both had to watch it, and we naturally had a lot to say.

If you aren’t a huge Sailor Moon fan, let us explain something about this review.Many people know that in the 90s there was a cartoon called Sailor Moon. It featured teenage girls fighting crime and spawned a resurgence of “magical girl” themed animes. But the show was based on a manga series, named Bishōjo Senshi Sailor Moon (translating to Pretty Soldier/Guardian Sailor Moon). The story has been reimagined several times, starting as a manga, animated series, musical, and a live action TV series (with a puppet cat).

So what is Sailor Moon Crystal then? 22 years after the first series debuted, the story went under a facelift. The show isn’t a continuation, or re-imagination of Sailor Moon. Sailor Moon Crystal follows the same base storyline as the original animated series – but claims to follow the manga much more closely. But this incarnation uses new animation techniques to appeal to a new young audience. This happens often, just think about My Little Ponies and Teenage Mutant Ninja Turtles.

Jennifer: I’ll start on the high note, the writing. I had the benefit of watching the original from 1992 recently. When watching the first episode, I noticed the episode played out just like Power Rangers. Evil witch obsesses on stealing energy. She sends out a demon out. The hero defeats the monster, evil witch gets angry. Episode ends. The flow of story, action, and transformation scenes are choppy, but gets better after a few episodes. Sailor Moon Crystal starts off well balanced, probably because they don’t spend much time talking about the bad guys. This lets the writers take their time telling the story about Usagi.

Alexa: I would actually have to disagree on this one! To start off, I did not like this first episode…which is very unfortunate. I went in wanting to like it. I didn’t need to love it, but there were just so many things that were driving me crazy as the episode progressed.

I will also start with the writing – like we pointed out before the idea of this re-imagining of Sailor Moon is that it is “supposed” to follow the manga more closely than the original. It should not need to be shot- for- shot the first issue! At that point I would just go and read the comic. I also had an issue with the dialogue. Now, this is the cartoonist part of me talking, but the whole idea of animation is to show AND tell. Throughout the entire episode Usagi is simply telling you who these characters are in her head, compared to the original first episode where each character was able to introduce themselves through dialogue or a scene playing out. Show and tell, don’t just tell. That just seems lazy to me.

Jennifer:But… I too have a beef with how closely the show follows the manga. The argument for Sailor Moon Crystal is how closely it follows the manga. To me, such arguments are used to preserve the “feel” and essence of the original. Which means balancing story and art while making proper transitions into the new medium. But what the show does is try to translate it as literally as possible. Which is sometimes bad.

Sure, I am all for adding all the frills of her hair in the animation, adding her feathery barrettes, stepping on a cat. But sometimes there reasons why things aren’t translated. For example the characters seem too thin. Sure they might be closer to the manga in drawing style, but seeing the characters move seems unnerving.

But I don’t think the anime looks like the manga. The manga is more flowery, but doesn’t look as angular as the new animation. Even the mangas themselves vary. The color inkings and artwork look thinner, pointer, and more flowery than the actual manga pages. Sure the newer Sailor Moon looks more like the original, but from which vision? I would argue the coloring doesn’t look like the manga concept art, so aren’t the artists adding their own translations of the manga for the animation?

Alexa: On that note – I think the original show, dated as it may be, is beautiful! Not to say that this newer version doesn’t look nice, but it is definitely lacking certain details that gave the other it’s charm.

1) The doilies. WHER ARE ALL OF MY DOILIES?! When you look in the backgrounds of each episode there are beautiful watercolor paintings with cell animation layered on top, like most older animated shows. They also made use of doilies for patterns during romantic scenes and the commercial break bumpers. The new show looks very pretty and shiny – but that seems about it for me. Just…shiny. The backgrounds seem like an after-thought instead of something that brings the whole piece together. But I might be nitpicking here. (Jennifer: I totally agree, the backgrounds are probably the ugliest things I have every seen. But I’ll let you finish!)

2) Character design. I’m just not that into it. I think they look too thin and they look so stretched out. This is just a personal thing for me though. I have seen plenty of manga and anime that use that shoujo style.

Jennifer: The point? You shouldn’t blame poor character art or style on the manga. Many people are complaining about the horrible styling, and other defend it saying “IT IS SUPPOSE TO BE LIKE THE MANGA!” But it will never be 100% accurate. Period. So it is a pretty faulty argument. I think the original 1992 cartoon captures the feel of the manga better. 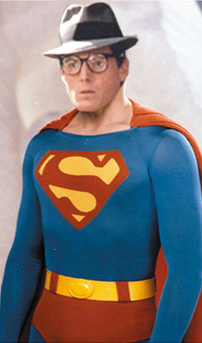 Oh Hi Frank! Well I was throwing a costume party and I gosh darn ran out of milk, so I just popped over at the grocery store..

And what the heck is up with Tuxedo Kamen? Why is he wearing a tuxedo out in public? Getting a fancy champagne slurpee? I get that Tuxedo Kamen is wearing a tuxedo when first bumping into Usagi in the manga. It would be like Clark Kent walking around in Superman’s suit, but never taking off his glasses and hat.  “Nope that isn’t Superman, he doesn’t wear a fedora” Maybe they changed it because it didn’t make sense. And, no one wears sunglasses with a tuxedo. Lame.

Because of the improved writing, I am a little excited to watch the rest of the series. I like the original 1992 Sailor Moon, but I can’t help but feel the stories are always rushed and not well planned out. I am also excited to see Sailor Mars, as she seemed to be dumbed down for the original show, making her more petty and more like the stereotypical teenage girl. Though, I don’t really like many (any?) of the newer style conventions of modern animation.

Alexa: I definitely agree with Jenny on the “accuracy” point. No – this anime will not be the manga, and that isn’t a bad thing! I am really looking forward to seeing how this show progresses. Hopefully the only episode that really made me feel “meh” was this first one. I don’t necessarily agree that the writing is better but I have already stated my case for that.

On the other hand and on her last point, I had always really liked Sailor Mars in the previous show! Although I am very pumped to see the other characters come into the fold. I have read some of the manga so I know their personalities are tweaked a bit, but again, I really can’t wait! You can’t have a Sailor Moon without the rest of the Senshi (Scouts).

I am also curious to see how well this show does in the end. Recent magical girl series have taken the original idea of the “Magical Girl” and switched it around or updated the genre for a new audience. Here’s to an exciting anime viewing adventure!