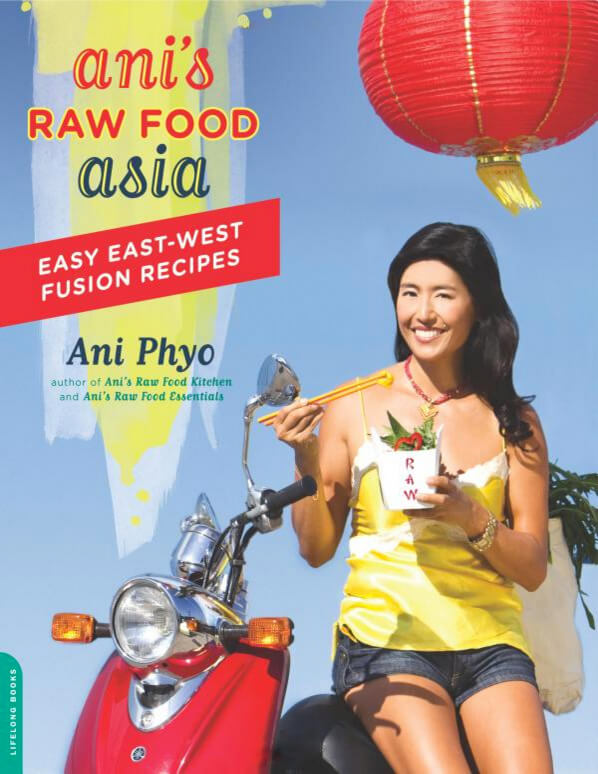 When I first went vegan I did it mostly for health related reasons. In the middle of it all I started to get sucked into the raw lifestyle. I slowly branched away from it, but I am still always interested in eating more raw food. I decided to try and eat more raw lunches and decided to use some of the recipes from Ani’s Raw Food Asia cookbook. I love Ani’s simple and easy recipes, making it quick and easy to prep a lunch.

The pictures are pretty true to what the food looks like, which I really like. Nothing drives me more bonkers than seeing a photo that will never match my recipe. Ani’s food does look inspiring to make, but there aren’t that many photos of the food themselves. The photos in the book are actually more about the sights and people that are in Asia. There are photos of Ani preparing recipes, and posing at markets. I would say this is annoying in a cookbook, but honestly, I like it. I find it relaxing and I like flipping through the book to just look at the photos. And let’s be real, do I need a photo for all these salads? Answer- no.

Unlike most modern cookbooks, Ani’s organization is a little all over the place. This might be a smart move. It isn’t often do that people sit down and read all of a cookbook. So Ani takes advantage of how people read a cookbook, by flipping through recipes, and gives information and facts throughout the recipes. Most of her tips are mostly about keeping up health, mentally, physically, and living an eco-friendly life. Before doing this review, I’ve read most of the note she has written, which I normally don’t do.

What does drive me nuts about this style is that certain recipes are scattered all over. I would of liked to have the sauces and pastes all grouped together rather than all over the place. If I just want to make that sauce, it is easier to find in a chapter devoted to sauces, rather than tucked away under the “rice” section. It isn’t a huge problem though. Otherwise, like any other cookbook there is an introduction, recipes divided up by types, suggested menus, then some more closing remarks about living a healthy life.

Ani’s writing is always easy, but sometimes a little too dumbed down. It is a little frustrating to read some poorly worded information, that ends up being false. I might know what Ani is trying to say, but it the wording makes the information easily misinterpreted. For example she talks about buckwheat and writes “buckwheat is a seed, not a wheat, so it’s gluten-free.” Yes buckwheat is gluten-free, and yes, it isn’t related to wheat. But “not a wheat”? That is just horrible english, and makes the definition of grains even more confusing for most people.

On the flip side there is also some great information that is very much true. I have to agree with many of suggestions she makes for living a generally healthier life. So I wouldn’t say that everything is false, but when it comes for nutritional and food specifics know that she is simplifying the information a lot.

In general I like Ani’s super easy raw style of food. This book is probably better than her other books for starting out with a raw diet since most of the food doesn’t use a dehydrator. The dishes are pretty veggie heavy which is what I am looking for in a raw recipe. I do wish she offered up more recommendations for substitutes for recipes that use a dehydrator. She does recommend using the oven but it would of been nice is she suggested other substitutes like using a rice paper wrap instead of her dehydrated coconut wraps.

What I do like about the cookbook is that it isn’t very judgmental, particularly at the end chapter. Ani shares her experience with raw food over the years, and admits that she doesn’t eat raw all the time. Nor is she totally a vegan anymore, but is more so a pescatarian (or maybe a flexi-pesca-tarian? Basically fish is only a small fraction of her diet.) It takes a lot guts for a person to admit when their health isn’t 100% when their whole profession is built on it.

The authenticity of the recipes are a little up in the air. Ani doesn’t claim that these recipes are authentic, clearly since some of the originals involve cooking. Some of the Korean namul and kimchis are probably rather close to being authentic since she has Korean roots, and says in her book she visits family in South Korea. I think it bothers me when Ani tries to call a recipe after an specific dish, and it just isn’t even close. For example the samosas were delicious, but didn’t use potatoes, nor did it have a wrap around it. The only recipe that really made me annoyed was the “black rice pudding” which was a recipe for chia pudding. Neither are anything alike, and it really should of just been left out of the cookbook in my opinion.

Overall, I think I would recommend this book to anyone who is trying to eat more raw foods. There are some light dishes that are quick to make. I don’t think there was a recipe I wouldn’t make again (except the ‘rice,’ but that isn’t exclusively something Ani has made up, just give me normal rice please.) Sure there are some modifications people might have to make if they don’t have a dehydrator, but if you have a blender and food processor, you will be able to make most of these recipes.