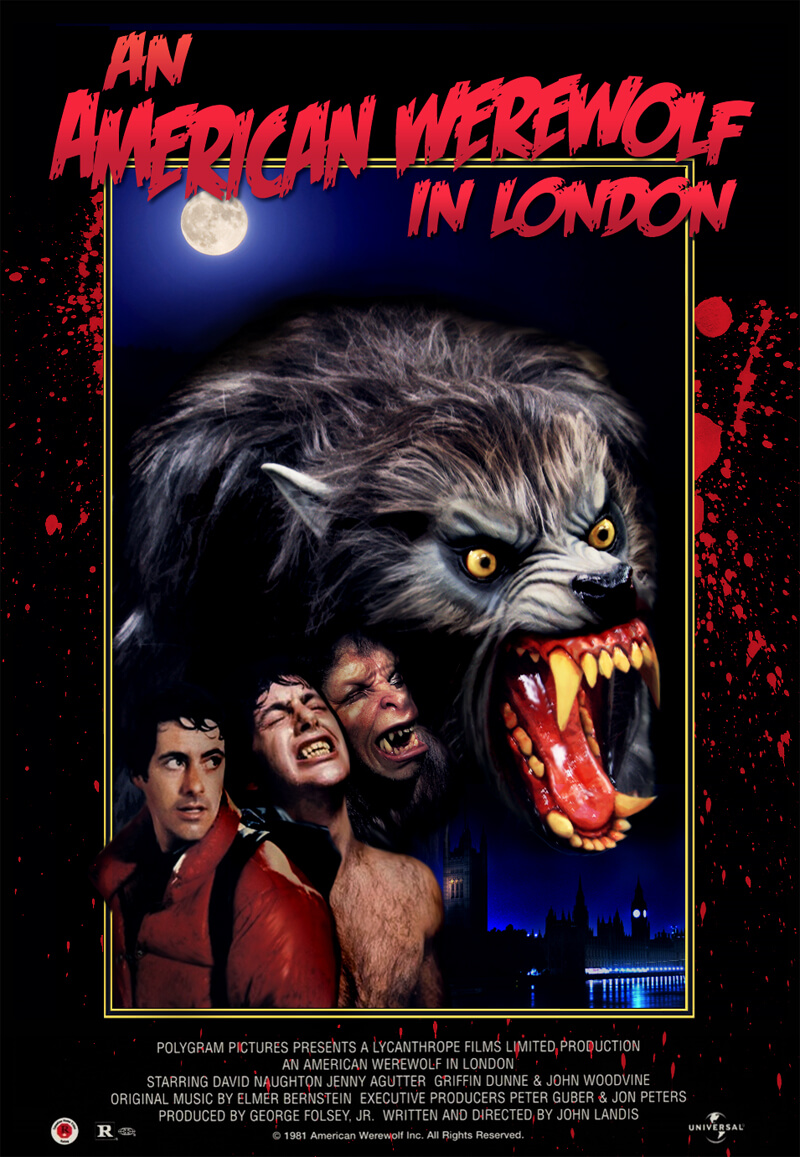 An American Warewolf in London

Plot: Two American college students are on a walking tour of Britain and are attacked by a werewolf. One is killed, the other is mauled. The werewolf is killed but reverts to its human form, and the local townspeople are unwilling to acknowledge its existence. The surviving student begins to have nightmares of hunting on four feet at first but then finds that his friend and other recent victims appear to him, demanding that he commit suicide to release them from their curse, being trapped between worlds because of their unnatural deaths. –IMDB

Review: Ugh. I hate when sexism ruins a film. This film is a classic since it mixes humor with horror, and it has some great special effects. Since humor is involved the gore and spooks are never taken too seriously. Nor does the film rely on them to push the story forwards. I could keep praising the film for the star qualities, but that is well documented. It is the reason why this movie is a classic.

BUUUUUTT….. the humor is totally dated. Yes, you can tell a white cis-gender man wrote this script. The main character David has a frat boy attitude. He talks to his travel companion only about having sex with women, is rude to the police and hospital staff, and tries to insult the Queen and Prince by calling them queer. Sure it was insult at the time, but hard to swallow when there is so many other problematic bits of the film.

The love interest, Nurse Alex is a total bimbo and has no personality. I feel bad for Jenny Agutter to have to play such a dull role. The whole time she is just there to build sexual tension with David. Actually it is more like David sexually harasses her during her job, and she reacts in the way that men fantasize about (aka the lady actually likes it.) Then as we moves the story forwards, David starts to believe he is a werewolf, and still Alex still finds David attractive. It is so unbelievable. 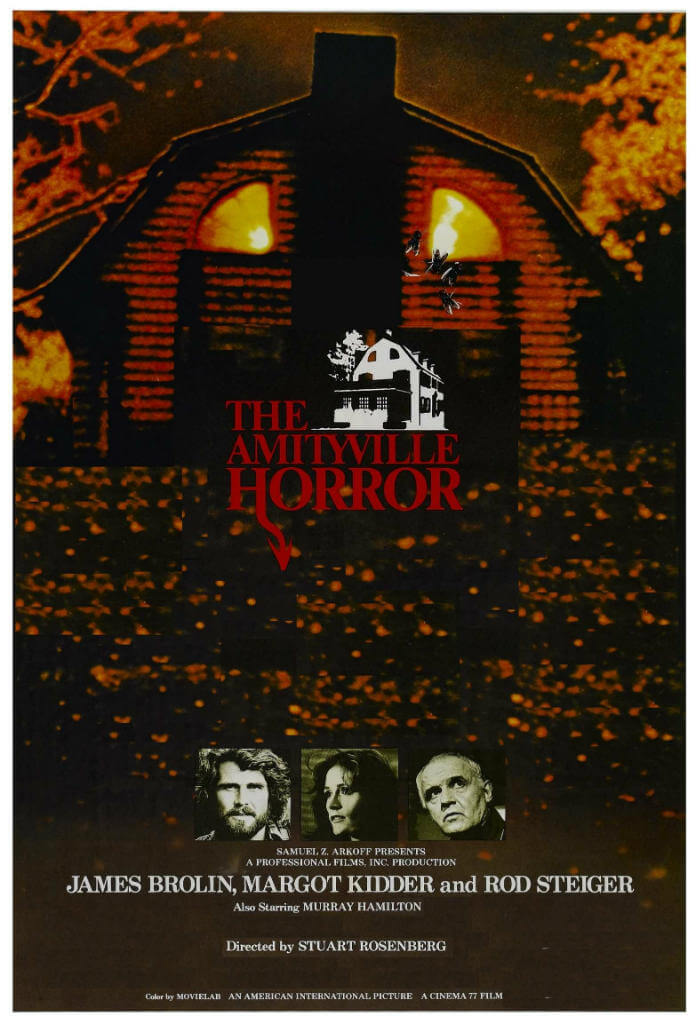 Plot: Newlyweds move into a large house where a mass murder was committed, and experience strange manifestations which drive them away. –IMDB

Review: I remember when this movie was being remade in 2005. I didn’t care about the movie, but I remember basic cable channels were flooded with specials all about the movie. The story is suppose to be based off of the book The Amityville Horror, which is suppose to be based off of true events. I’ve always find real life haunting stories interesting and much more chilling than movies. Do I believe they actually happened? No, but they still freak me out. This story always caught my interest more than normal because this house is in the town that my Grandmother lives in. I’ve actually talked about this before on the blog.

Since the story takes place in a town that’s I’ve been to I had a harder time to let my imagination go wild. As I was watching I kept feeling like it didn’t LOOK like Long Island, and I knew very well that the house wasn’t the original. Turns out the movie was filmed in Tom’s River New Jersey. Which doesn’t seem like a big deal, except for the water is drastically different set up, and the property in the movie is HUGE! I joked with my husband that the price of the house in the movie was a steal, and joked they could just divide up the property and pay for the house that way (the real Amityville House sold recently for almost one million dollars FYI)

Oh, and mild spoiler alert- there is something terribly humorous that the portal to hell is on Long Island. Anyone who had to drive into Long Island probably felt like they were driving further and further into hell.

So I haven’t actually talked about the movie much. I have to say it wasn’t bad, but it was a little underwhelming. Since the movie is suppose to be based off of a real event, the flow of the story isn’t the greatest. The movie ends kind-of anti-climatically. And being a little bit of a ghost/occult movie fan, something didn’t make sense. Why is everything oozing? Why the flies? There is no reason why George Lutz (the new homeowner) would look like serial killer Ronald DeFeo (the murderer of the previous owners) either. I think the odd pacing is probably because the movie wanted to keep with the series of events from the book. The movie even keeps a countdown of what day it is since the family moved in.

Historically this movie is pretty important to the horror genre. It is another case of a low budget horror film that became wildly popular. There is no doubt that Poltergeist‘s popularity was set up by this film. Since there are so many similarities between Poltergeist and The Amityville Horror, it adds to the underwhelming nature of the film. Compared to The Amityville Horror, Poltergeist is in hyperdrive. Overall, it wasn’t a bad movie, but it is fairly slow moving and a long movie (117 minutes- almost 2 hours.) 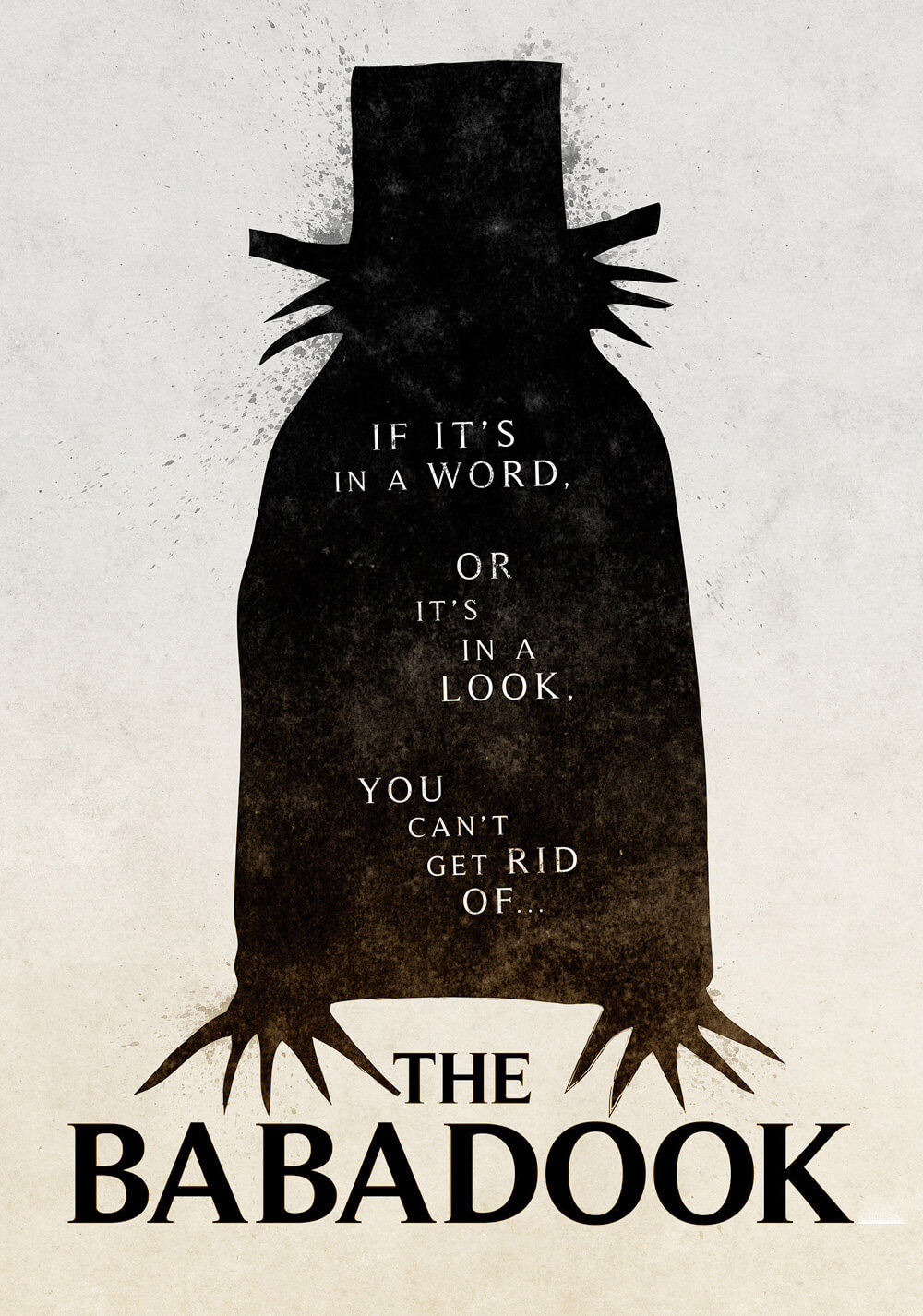 Plot: Amelia, who lost her husband in a car crash on the way to give birth to Samuel, their only child, struggles to cope with her fate as a single mom. Samuel’s constant fear of monsters and violent reaction to overcome the fear doesn’t help her cause either, which makes her friends become distant. When things can not get any worse, they read a strange book in their house about the ‘Babadook’ monster that hides in the dark areas of their house. Even Amelia seems to feel the effect of Babadook and desperately tries in vain to destroy the book. The nightmarish experiences the two encounter form the rest of the story. –IMDB

Review: Funny thing is that people chuckle when Jon and I watched Rosemary’s Baby during the pregnancy. I’ve seen many reviews and such talking about how it is the horror that makes them want to never have a baby. But I would argue that The Babadook is much more horrifying for parents. Let’s start off with Samuel. He is a little boy who’s activity levels are through the roof. “Horrible little shit” is an accurate title for him, and this instantly let’s the audience sympathizes with Amelia, the overworked single mother. Samuel’s behavioral problems stem from the families grief for their father who died in a car accident while driving Amelia to the hospital to deliver Samuel.

The movie is rich with metaphors and is filmed excellently. This is probably why the movie is loved by all critics. A quick search of “babadook reviews” will end up with many glowing reviews talking about the story and it’s great portrayal of grief with adults and children by using the metaphor of a monster destroying their lives.

What really strikes me about this film is that it falls into many tropes of the horror genre, the color scheme, skittery sounds, jump cuts, etc used in other horror films. But there is so many unique aspects of the film. For starters it is directed by a female director, which isn’t common for the film industry. It isn’t a normal monster story- in fact the monster is sort of blended with a ghost in it’s supernatural abilities. The end result is a truly haunting film that I would recommend to anyone who thinks that horror genre is dead. 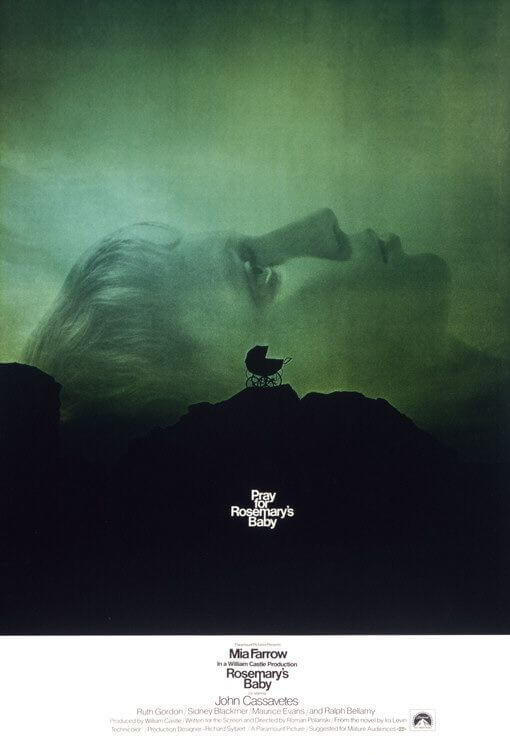 Plot: Horrifying and darkly comic, Rosemary’s Baby was Roman Polanski’s Hollywood debut. This wildly entertaining nightmare, faithfully adapted from Ira Levin’s best seller, stars a revelatory Mia Farrow as a young mother-to-be who grows increasingly suspicious that her overfriendly elderly neighbors (played by Sidney Blackmer and an Oscar-winning Ruth Gordon) and self-involved husband (John Cassavetes) are hatching a satanic plot against her and her baby. In the decades of occult cinema that Polanski’s ungodly masterpiece has spawned, it has never been outdone for sheer psychological terror. –Criterion Collection

Review: Okay, I am cheating just a little. I watched this over the summer, but I really love this film. I think it is one of the best prochoice films out there. Rosemary want to start a family and become a mother. But ever since she finds out that she is pregnant it seems everyone is controlling her decisions. She doesn’t take vitamins like everyone else, she takes special juices that her neighbor makes. Her doctor advises her to not read up on pregnancy- it would only worry her. She is quickly recommended to go a specific doctor. She is only a vessel to create this baby, and everyone makes sure everything is going according to plan.

I started to read the novel and it is scary how close Polanski keeps the script to the novel. Much of the dialogue is pulled from the novel. I dare say you could watch the movie and just skip reading the book, or vise-versa. That doesn’t mean Polanski doesn’t take a lot thought in how the film is shot. I love how he doesn’t pull many cheap editing techniques that make the viewer jump in their seats (IE abrupt cuts, going from low to loud sounds, etc) He lets the conspiracy unfold.

What makes this movie so scary is how relevant it still is with all the anti-abortion laws in the United States. White males are still telling women what they can and can not do with their bodies. Rape culture is still very prevalent, which probably contributes to many of the insane and ignorant reproductive laws. Nothing irks me more than John Cassavetes’ portrayal of Guy Woodhouse, Rosemary’s husband. World biggest scumbag. Funny thing is that I think John Cassavetes only plays skeezy guys.

Overall: One of the best horror films out there