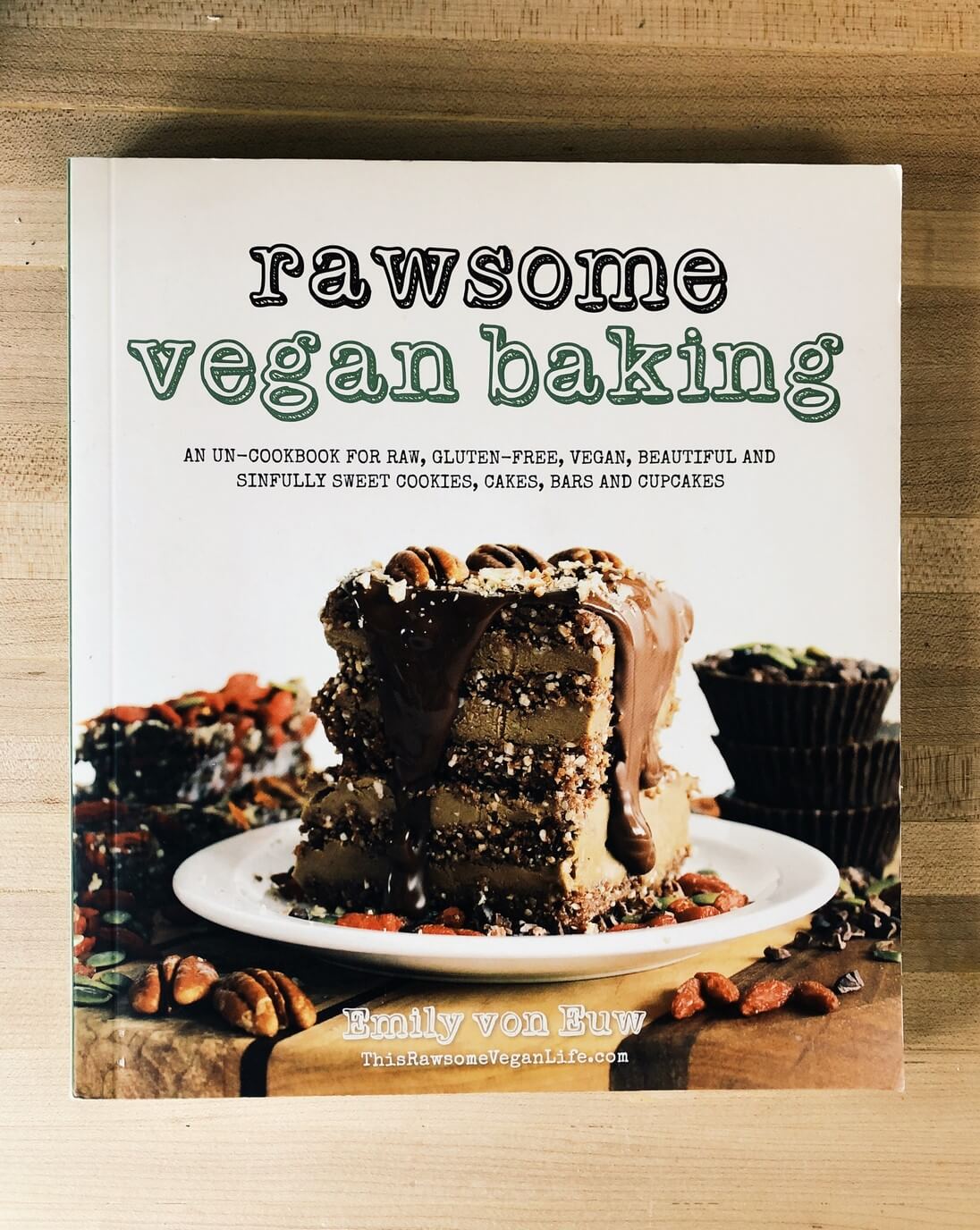 Before having little Wolfie, I probably made more raw desserts for myself. Why not? Nuts and dried fruit, it was like trail mix in one easy to eat bite. I’ve been a fan of This Rawsome Vegan Life for awhile, seeing how Emily has evolved over the years. So does this book hold up to the authors new perspectives on healthy eating and body image?

I feel like it has been awhile that I’ve felt like the photos have been 100% that aren’t a major publication of a tried and true writer. (IE Isa Does It, Salad Samurai and the like) Emily’s photos are beautiful. I love her natural light, but the desserts never come off as too fancy, or difficult. It is amazing the Emily was able to make, photograph, and eat all these desserts. I mean let’s be real, that’s a lot of dates, and a lot of nuts.

Emily gives a VERY brief introduction and “where to find” chapters. She divides her chapters into five groups, Cakes & Cupcakes; Bites, Bars, and Cookies; Pies and Tarts; Puddings and Ice Cream; and Basic Recipes. Some recipes seemed a little like it could of be swapped around, but then again nothing is actually cooked so there is little different from many of the recipes other than assembly.

This is where Emily shines. I love her writing, so simple and positive. It is a little interesting reading the book and knowing about her eating disorder. I am sure some some wording would of changed if she was writing the book today, but overall I didn’t feel like it was too triggering with words like “clean” or “healthy” etc. I also love how simple the recipes and descriptions can be.

This book is REALLY easy. There is nothing in the book where I felt intimidated to make it. Perhaps some of the recipes that use fresh coconut meat turned me off, but there aren’t too many. No crazy soaking, sprouting, dehydrating, etc etc which can be off putting in raw cooking. The main reason why I haven’t cooked much from here is because of the use of dates. It is so expensive! But she does offer some subs, like raisins and dried pineapples.

My only other critique, which happens often with raw food books, is that you can easily shape and mold one recipe into something totally different with little changes. One recipe below was suppose to be a cold fridge dessert but could easily be changed to an ice cream sandwich. One dessert is a “cake” but it is pretty much just ice cream. It is all a little relative.

If you are looking for some sweets to make during the summer months, I would strongly recommend this book! The recipes are simple, non-intimidating, and everything has been yummy. She even gives weights which I find helpful to dates, which I always use too much or too little. Naturally though, the recipes can be pricey to use date and nuts for the desserts, so be warned for your wallets.

As always I try and post as many reviews of specific recipes. I try my best to do one recipe per section, but I pretty much missed Basic Recipes. If there are any recipes approved by the publisher online I left a link. Why not? Try a recipe before buying book! 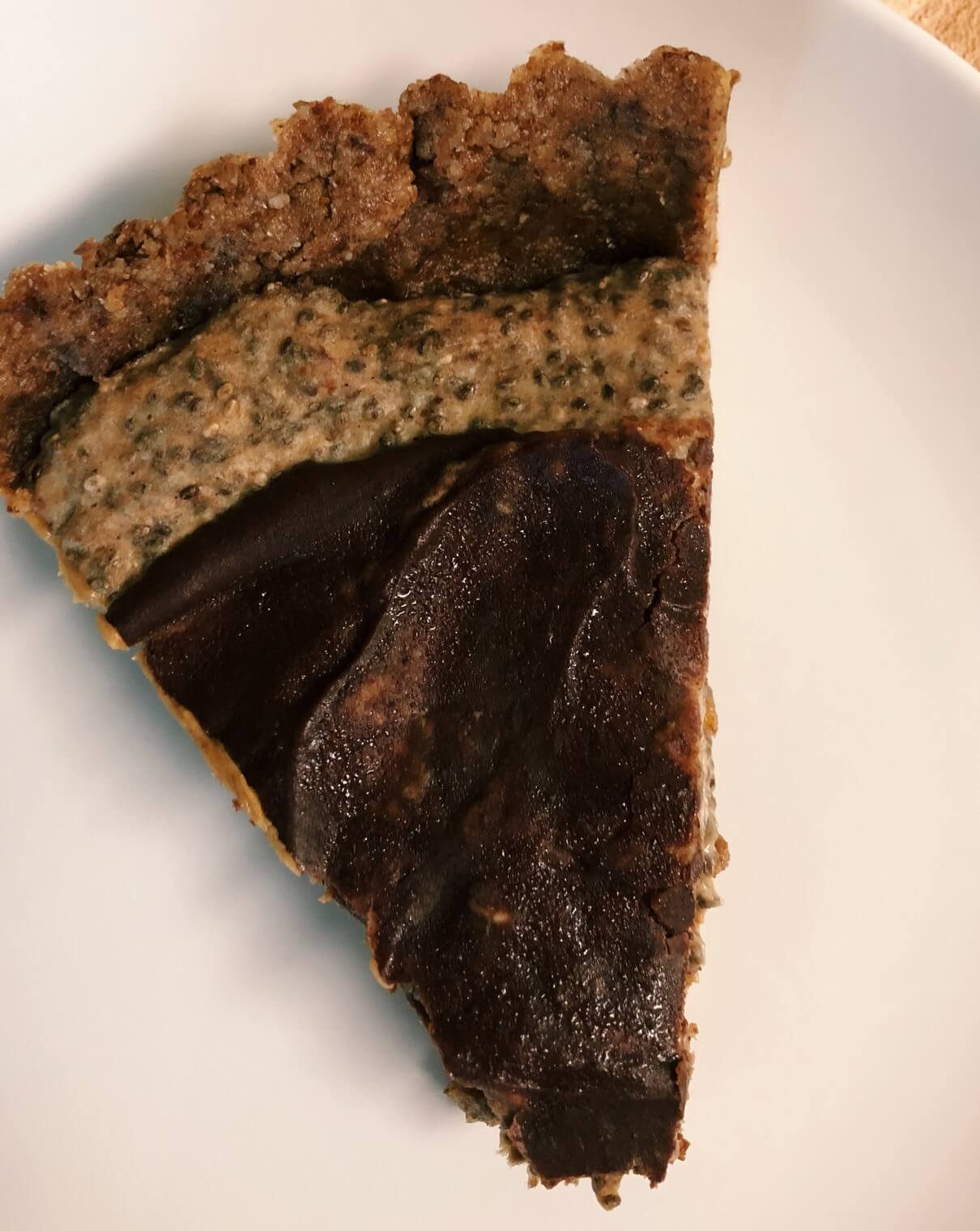 Chia Caramel Pecan Pie with Cinnamon Chocolate Sauce
Section: Pies and Tarts
Recipe: This Rawsome Vegan Life
This was super tasty. I used almond meal instead of pecans for the crust (I had to use it up) but for the most part everything was to the T. It came together really easily, and I loved how the chia seeds make a thick stretchy filling. It had a very caramel like texture! Since it had so much water in it the dates broke down very nicely, which I usually have a hard time with raw caramel recipes.

Although now that I type this I realize I forgot to add the raisins to the filling. Hmm… this would explain the thin filling. Honestly, I am not sure if I would want the raisins in there. Maybe I would just double the filling and call it day. 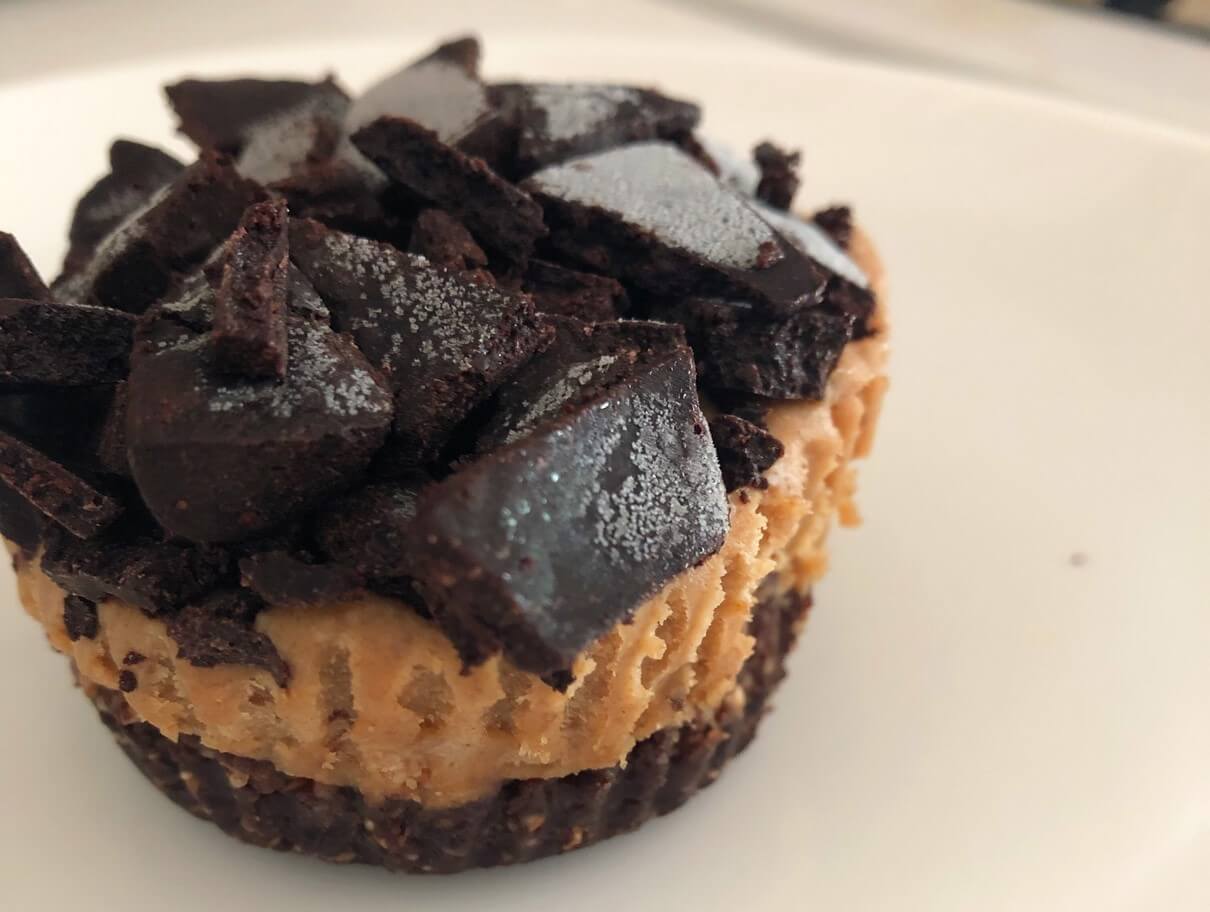 Coffee Creme Mousse with Chocolate Pecan Crust
Section: Pudding and Ice Cream
Oh boy was this tasty. It was so good I even brought it over to my in-laws for dessert. The dessert has a date pecan and cocoa powder “crust” then a mainly cashew, date, and coffee based filling. Then it is toped with an oil-cocoa powder chunks. The filling is amazing, and I was able to get a super smooth “ice cream” base. But I wasn’t a fan of the chocolate on top. I think I would of heavily cut down on the maple syrup used. It felt wasteful and it made it pretty soft. I also didn’t see the point of freezing it into a thin layer, breaking it into chunks, and sprinkling it on top. I think I would of liked having a solid layer on top.

I also feel like this could of easily been turned into an ice cream sandwich. Which would make it more for a casual snack. You could easily make the crust, freeze. Then layer the cashew-coffee filling inbetween the crust in a mold while you freeze again to set. Will I make these again? Truthfully probably not because it calls for dates, and they just can be so expensive!

Loco Coco Bars
Section: Bites, Bars, and Cookies
I pretty much made these bars because I wanted something sweet and I had all the ingredients. I can say they are some of my favorites from this book. They are pretty easy to make since they use some less expensive ingredients like oats and raisins (instead of dates.)  In fact, I really liked the flavor that the raisins brought to the table. Very sweet but different. I pretty much skipped the chocolate topping recipe, and just poured on some melted chocolate chips. I remember having some trouble with the coconut topping, but I think it is because my food processor is so large for such a small amount.

The recipe makes a good bit, and I was able to freeze most of them and pull them out of the freezer over the next few months. This has been a great treat, and especially nice in the summer. I will definitely make these again in the future.

Rawdical Raisin Cacao Cookies with Oats
Section: Bites, Bars, and Cookies
This is another recipe I picked mostly because of the ingredients list. It is simple and easy. Since all the recipes make so little, and I eat them too fast XD I doubled the recipe. These came together really fast, but something was off. I think maybe the agave syrup brand I was using tasted a little funky. These cookie bites had a bit of a fermented sort of flavor. I can’t figure out what might of caused it. I’ve made similar cookie bits before, so I am stumped as to what the problem is. I think I would use some non-raw syrup next time I make these.

Strawberry Banana Cream Cake with Mint
Section: Cakes and Cupcakes
Recipe: This Rawesome Vegan Life
This is one of the first recipes I tried out from the cookbook. It turned out pretty well, though I did cake in two layers since I didn’t have an adjustable springform pan. So it didn’t have that look of pink “cake” and a “orange frosting.” What I like about this cake is that it is frozen so it kept for a long time. The downside is that since it was frozen the strawberry layer crystalized more than the frosting layer and was a little hard to “cut” into.

It doesn’t take too long to make, and I everything blended up nicely. I like how it uses mostly just bananas, oranges, strawberries, and cashews. Even though the recipe is very cashew heavy, it makes 8 servings. I think one “slice” was pretty filling and probably has just as many calories as a normal cake slice.

Would I make this recipe again? Maybe. It does make a great snack for the summer as a raw ice cream cake.

Totally Tahini Cups with Coffee Cream Filling
Section: Bites, Bars, and Cookies
Recipe: Spabettie
Emily is a wizard at making things look cute and pretty! My cups didn’t look nearly as nice as hers, but then again, this is my first time making these types of snacks. I ended up with a lot more date filling than I could use, and I think that is because I chopped my dates up. Lesson learned. If I made these again I would also try and make the cups thinner with the tahini shell, probably it would result in more than just 6 cups.

These tasted awesome. I love the mix of coffee and tahini, which you wouldn’t think would taste so great. They stand up well in the fridge, and much easier to make than what I expected. I will happily make these several times again in the future with leftover ice coffee.