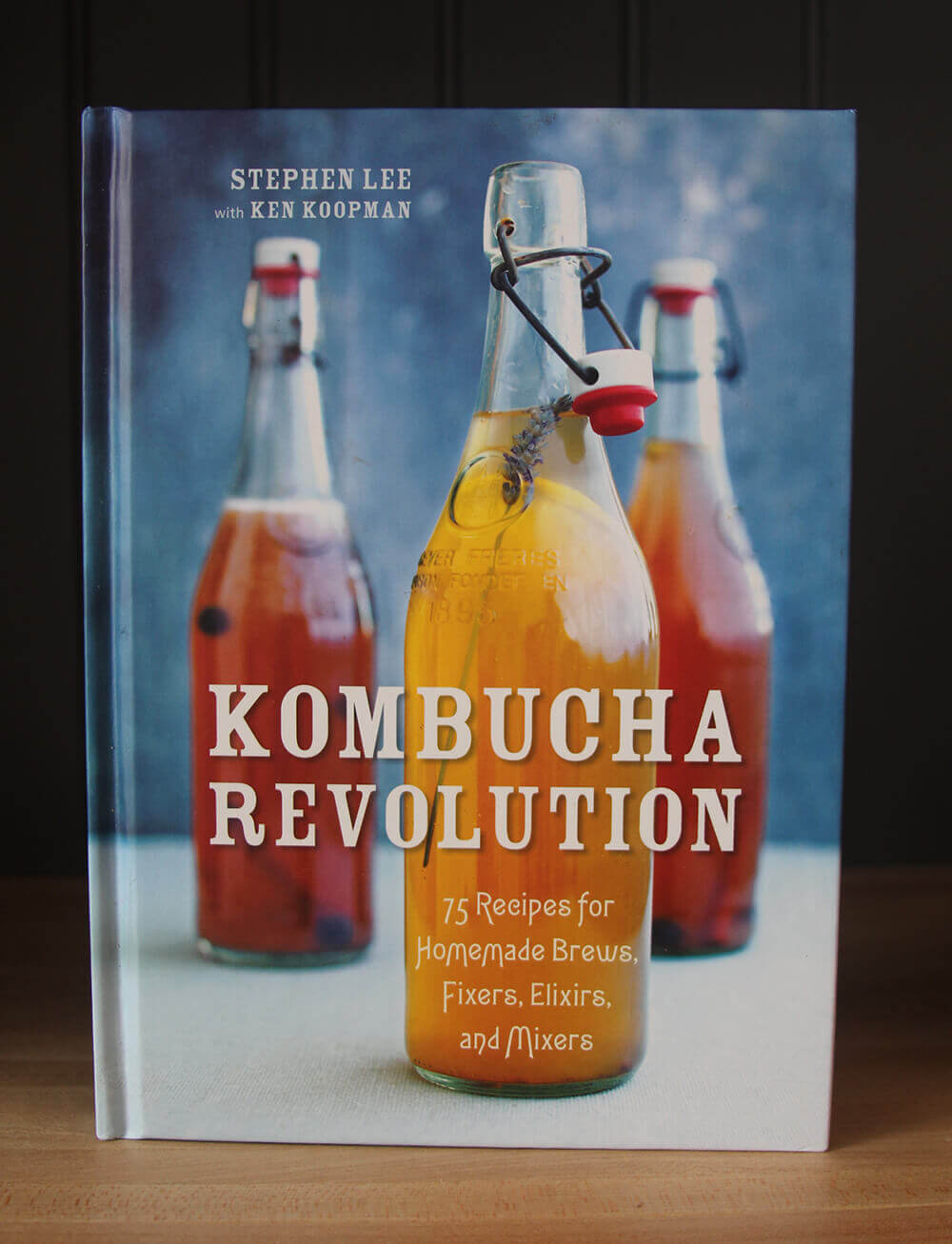 I started to brew kombucha since I wanted to start a daily dose of probiotics. Buying kombucha can be expensive, so homebrew was the solution. Sadly I was brewing more than I could drink, and I started to look for ways to use it up without just drinking it.

This book is written by Stephen Lee. He previously owned Tazo Tea, and currently (or at least at the time of writing the book) owns Kombucha Wonder Drink. Sure there is some plugging of the company, but don’t worry, it none of the recipes call for specific products. They don’t even call for a scoby sold by the company, so that is reassuring. 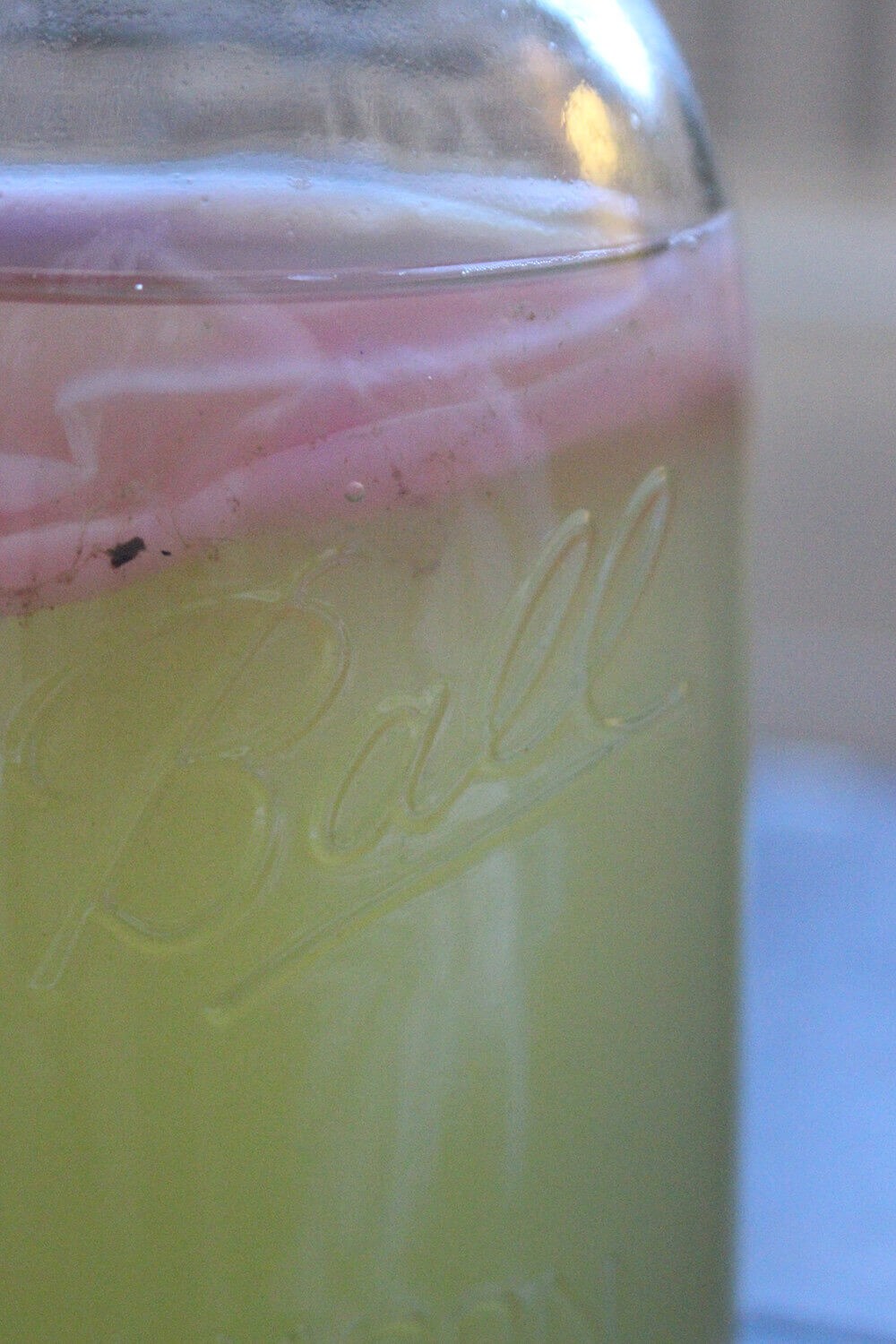 There are quite a few photos in the book. The photos are beautiful and bright. Most photos are center around the recipes, though some are simply included for aesthetics. Glamor shots of a kombucha jar, over the head shots of vegetables on the chopping board, and production lines of a kombucha bottling factory. I would of loved to have a photo for most recipes since they are drastically different from each other, but I don’t think it is needed since most recipes are easy to imagine what they would look like.

I love the writing in this cookbook. It sounds silly to harp on writing in a cookbook, but this kind is particularly important since you are giving LONG INSTRUCTION for the brewing process. I knew how to make kombucha before the book, and I can hands down say the book made me feel less intimidated from brewing at home, and stepped up my overall kombucha game. It tasted so much better. I was a little shocked, how could it make that much of a difference? After reading blog after blog on how to make kombucha it made me appreciate this book even more.

This book caught my eye since it was more than just how-to manual for how to brew kombucha, it has recipes. When looking at the options this one, at the time, was the only one with recipes outside of drinks. It had recipes for soups, desserts, and cocktails. So did it live up to my expectations?

Yes and no. Overall, many of the recipes are not vegan, but are pretty friendly. Most recipes you could add a little this, take away that, etc. But the recipes themselves are very simple. For example there is a vinaigrette recipe that is no joke just oil, kombucha vinegar, mustard, salt and pepper. I think this book lends well to people like me who like experiment in the kitchen, and aren’t afraid of doing some quick ingredient changes. Overall I haven’t MADE much from the book, but I am much more comfortable adding kombucha to a soup or salad.

I think the second biggest help has been how much the book helped my brew game. I haven’t done too many flavored kombuchas, but I have mastered a nice dry kombucha. I take breaks here and there from the weekly brewing grind, but it has been in my life for quite some time.

But that was a few years ago, and if I were to buy a book now I might pick a different one. The Big Book of Kombucha is much more extensive. So much so, I am thinking of adding it to my collection. Would I still recommend this book? Yes. Especially for people aren’t sure if they want to commit to brewing. It is a reasonably priced book, so it isn’t a huge investment.

This set up will be a little different from other reviews. The book spends a good bit of time with brewing kombucha, ways to alter your brew, then recipes. I will breakdown some basics about each chapter, coming to a conclusion about the recipes in the book AND focus on specific recipes as I see fit.

Chapter 1: Home brews and infusions
This chapter really stepped up my kombucha game. The book gives specific steps and tips to make tea quickly and extract the best flavor for your kombucha. The basic step is boil water to specific temperature, brew a strong tea, then add water to cool and thin it out. This large pot method was much faster and easier than what I was expecting.

The chapter goes through a talks about other “infusion” flavors. These are so-so. These “recipes” are pretty much things to add to the end of the brewing cycle. I made the ginger infused version, and it worked fine enough. It mixed well for cocktails. My issue is that some of the home infusions start to use some exotic ingredients like whole vanilla beans, sorghum syrup, different roots, and large amounts of maple syrup. Making it an expensive drink to brew at home.

Chapter 2: Juices and Smoothies
I didn’t make much from this section. It was probably to least interesting section. It was really just a collection of smoothie and juice combos I’ve seen a million times before. Except there is a cup or two of kombucha. But for the sake of the blog I tried one-

Instant Pick-me-up
I think I made this drink purely because none of the recipes in this section were really singing to me. Most use juices, and I am too lazy to do that. This is pretty simple, just take a cup of kombucha, 1/8 tsp cayenne and turmeric. Couldn’t say I loved it, but it certainly wasn’t horrible.

Chapter 3: Spirited Cocktails
This is a section that I felt most inspired by. In fact, I am sure they could of easily just made a whole book of kombucha cocktails. But it isn’t, so they had do a little crash course info about making cocktails. There is a quick recipe for simple syrup and gomme syrup, which are used in various recipes, but I never needed to make it. Overall I like the collection of drinks because it stays away from highly perishable vermouths and many liquors are used over and over making it easy to try more than one recipe without buying a new bottle. There is even one mocktail recipe in the mix. I only tried 2 but it has encouraged me to play around a little more with booze and booch. 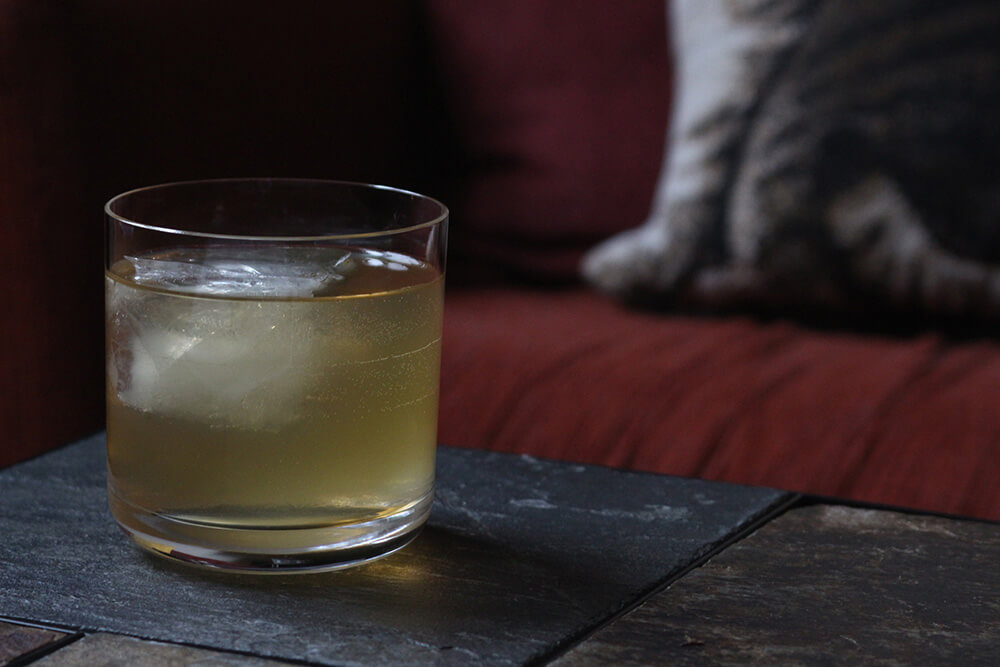 Healthy Mule
I think I made the ginger kombucha purely for this drink. It is pretty simple, and I am sure readers could figure something similar out just from my description of it is a Moscow Mule with ginger kombucha instead of ginger beer. Yummy and easy to put together.

The Petticoat
Recipe: Facebook Page
This drink was pretty amazing. I found that my green tea kombucha mixed well with the gin and St. Germain liqueur. It was easy to mix, and wasn’t too acidic. I found myself making it over and over again, until I ran out of the bottles of gin and st. germain.

Chapter 4: Dressings and Dunks
You have lots of dressings, dips, and spreads in this section. This was probably my explored recipe section. Especially since the vinegar is used in other sections of the book.

Kombucha Mustard
This is a pretty easy recipe. Take mustard seeds, pour kombucha over them. Let them soak and ferment, then blend into a paste. Done. It is a really interesting idea, but the result isn’t stellar. The mustard is too pungent to use often, and maybe that’s exactly what you want. Me, not so much. It makes recipes taste too mustardy and it is nose clearing strong when used raw in a sandwich.

Kombucha Vinaigrette
I am not a big fan of the oil to vinegar ratio that the recipe suggests. So I did more a 1:1 ratio, and liked it enough. I like the little hint of mustard in the mix. It is also a nice idea so I tried other vinaigrette recipes with the kombucha vinegar, with yummy results. So this might not be the BEST recipe, but the idea is delicious in other executions.

Kombucha Vinegar
This is simple enough- just let your kombucha brew too long. There has been two of three times I didn’t bottle my kombucha fast enough, so I got stuck with vinegar. It is a nice and handy thing, and I am sure I saved some cash, though not that much. This is used in some of the other recipes so it was nice to have around to try recipes on the fly.

Vegan Chèvre Spread
This was not my favorite. I haven’t dipped my food into the world of vegan nut cheeses, though I do have Miyoko’s legendary cookbook. My mother is going dairy free, and I thought this might be a good time to try out this recipe. It uses VERY LITTLE kombucha. I was a little surprised by it. But I let it sit and ferment, and frankly I question if it was enough to make much of a change. I would like to make some of the vegan cheese from Miyoko and compare. This recipe makes, what I think, is more than 8 servings.

Chapter 5: Kombucha at the Table
I loved the ideas in this section, but this isn’t a vegan book so there are lots of non-vegan recipes. Sadly because of this, I either didn’t want to make the recipe, or I modified it so much that I didn’t feel comfortable reviewing it. But the book gives some great ideas on how to use kombucha in food, including using it for broth, sourdough starter, a brine, or for a frying batter. Some recipes that are vegan are kombucha tropical fruit salad, kombucha mushrooms, pasta salad with kombucha herb dressing, kombucha sunomono, harvest breakfast breads with a kombucha sourdough starter, and kombucha coleslaw.

Pasta Salad with Kombucha Herb Dressing
This salad is a good prepare ahead of time, but not too far ahead of time sort of meal. If you let it sit for an hour or two, the thin sauce soaks into the pasta. Let it sit for too long all the citrus flavors fade. It was pretty yummy, but I wasn’t a huge fan. Particularly because it uses lots of fresh herbs, but when the herbs would be in season, the citrus fruits wouldn’t be. So I can’t practically think of a time to make it. But I like the idea of a kombucha pesto like sauce.

Chapter 6: Sweets and Ices
This is another vegan friendly section, although it is quite small. Only 1 recipe would need heavy modification to make vegan (an ice cream recipe) everything is already vegan! Sure there is a kombucha float “recipe” but just vegan ice cream, and the kombucha jello even has a vegan alternative using agar agar! But all the desserts are cold dishes, but maybe one day you will find a recipe for a kombucha vinegar pie on here. Hmmm….

Kombucha Jello
This is a pretty simple recipe. Just bring the kombucha to boil, add agar and sugar to dissolve, then chill. The result is really nice, and I love how lightly sweetened it is. It is a little loose, so I recommend chilling it in a container you will eat it in.