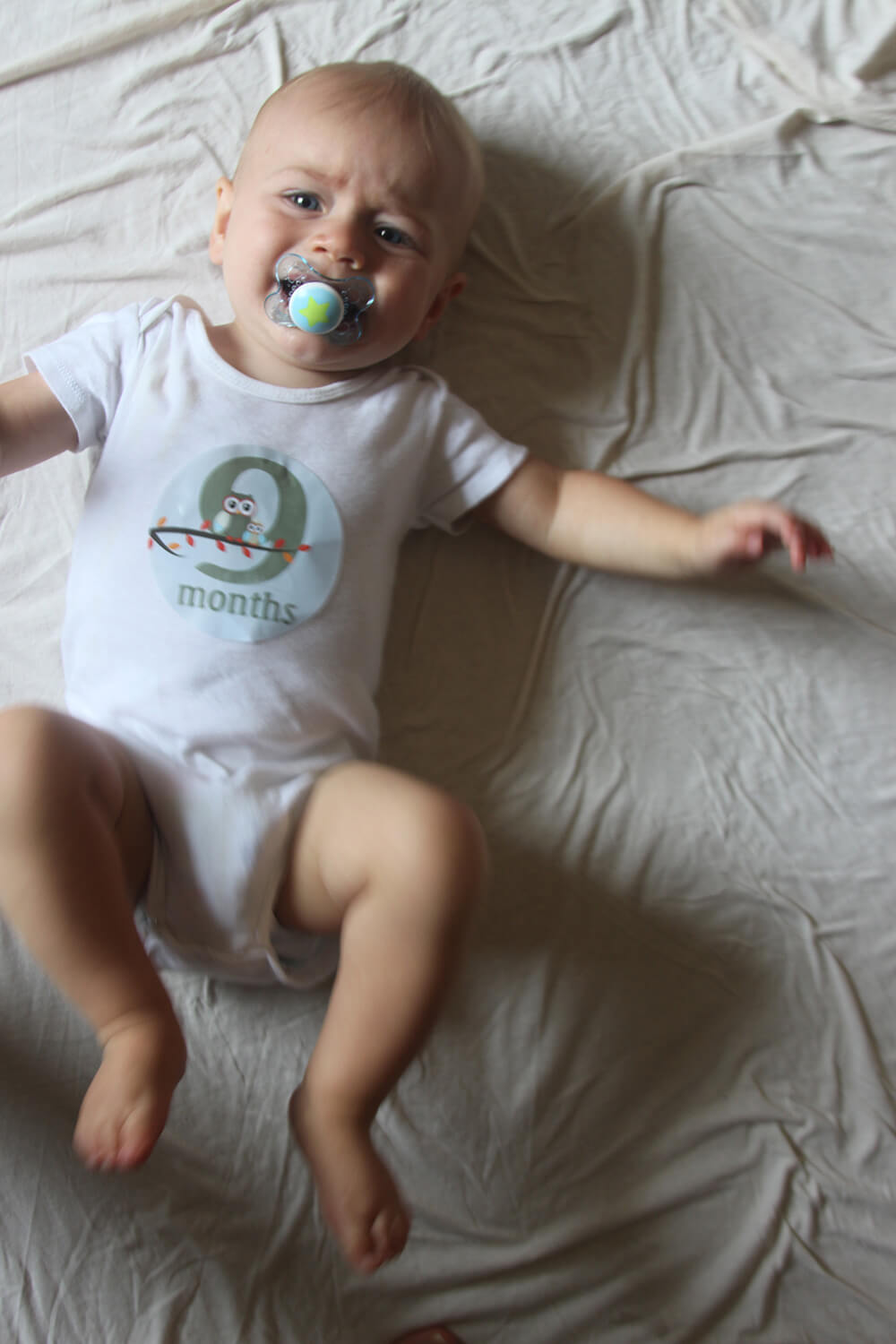 I know what you are all thinking- didn’t she just post one of these things? Yup- but it was practically a month late. *ugh* I know I am just terrible at this right? Well, if all goes according to plan, this will FINALLY be done relatively on time… *crosses fingers*

Let’s start with this photo- terrible right? He just won’t stay still. How do people do it?! I see all those trendy milestone blankets, but this kid will not stay on his back. I think the last photo involved Jon standing by holding Wolfie down till I started to hit the shutter. Oh well. You get the point. The kid is screaming and large. Moving on.

FOOD: Eating like a horse still. But we had some major break throughs! One being that HE ATE A LIL BB BURRITO! Yey! It was the cutest thing ever and it actually made some foods easier for him to eat (aka rice)

Wolfie is largely disinterested in my boobs. I mean he still likes to nurse, but I think sometimes he likes formula better simply because he can feed himself. He at one point was trying to figure out how to feed himself with my boobs. See I use a shield which is a small piece of silicon that makes it a fool proof latch for babies. He has ripped it off my boob, and tried sucking on it. Eventually he has figured out that there is something with the combination of the two, then he tends to stare at my nipples and pinch them. Baby. Listen. Stop it. It is weird.

MOVING: Oh man is Wolfie into walking… well at best as he can. He has been mostly “cruising.” No, he isn’t picking up men for casual sex, as my husband jokes, he is using tables and chairs to hold himself for walking. If he isn’t holding onto the couch or coffee table, it is usually the alligator walker we got as a hand me down. Seriously that kid just goes back and forth and back forth of the living room.

Naturally all this movement means there is a lot more thuds. I can now tell when he wakes up not because of screaming but because I hear the back of crib banging on the wall. He also has lots of little dings and bruises from trying to walk when he is exhausted.

GROWTH: Still tall and skinny. The most recent visit to the Pediatrician came with these stats-

Not too different percentage wise from the last visit. And the scary thing is that I was looking at his numbers to clothing sizes and pretty much his weight is in 6-9 month clothing and his height is clipping towards the 12-18 month clothes. Huh?!

The visit also showed that he has a slightly low iron count. The doctor said that he thinks there was a mess up with the tests since Wolfie doesn’t SEEM anemic. So that means I have to get back into the habit of giving him his vitamins again. Just incase.

And that’s more or less it. I am only covering about 2 weeks worth of life for Wolfie, so you know, not much to say.