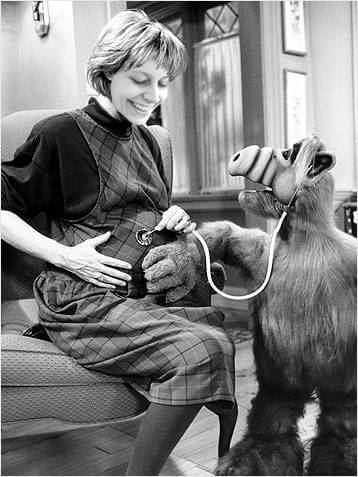 This was my facebook photo for the announcement, and I just couldn’t deny my readers this gem.

If anyone has noticed I haven’t been posting much on the blog lately. I can safely say a large reason for this is because I am pregnant. Yes you might of heard me drop the bomb on blog comments or facebook groups, but my husband wanted me to wait till we formally told all our friends and family before posting anything on the blog. Frankly I am glad I waited because overall I would say like maybe 5 in real life friends read this, but I didn’t want a friend to go nuts and tell everyone else and have Aunt Bertha freak out that I never called her (FYI I have no Aunt Bertha ^__~)

I have been wanting to tell readers why I’ve been MIA, mostly because people aren’t kidding about being tired the first trimester. And reading about it in my super science-y book– it is because your body is doing A LOT OF WORK getting the baby situated. Which is weird since it is the time when most women don’t talk about their pregnancy, and look the most normal. Not to make it seem like the rest of my 6 months will be a breeze- but I’d come home from work (early mind you) and just want to sit in front of the TV or read a book. It was weird, some how sitting on the computer was a draining experience.

So how far a long am I? Well, I am just started week 15- which means I just started the second trimester. Pretty much my digestion has been weird, my tummy looks like I ate a large burrito, my workout game blows, my boobs are even more huge, and now that everyone knows I am pregnant I get asked “how are you doing” more often than I like. I also get told by my Mom about how pale I am. I’m always pale. I mean look at those photos below- the last photo is my slightly tanned body and some lighting trickery.

There’s debate on the due date- I thought it was December 11th, Jon says it is the 12th, or maybe I am getting both dates wrong? Either way baby is coming out at some point during the month of December. ¯\_(ツ)_/¯ And I could look up this information up, but really… do you guys care? I just care about spiking my eggnog at SOME POINT post pregnancy for the holiday season.

So what does this mean for the blog? Hopefully I will still feature restaurant reviews, recipes, and whatever else like I normally did. But while pregnant I will do weekly (or maybe bi-weekly) updates of what is going on.. hopefully it’ll be interesting/humorous to everyone. And I am sure I will talk about vegan parenting post pregnancy, but I swear I won’t be using any pastel chevron on the site.

A Little TMI Guys:
One thing that tends to be a little on the down low on commonly talked about pregnancy symptoms are the ones regarding digestion. Apparently pregnant women not only get acid reflux/heartburn but they are also non-stop farting, burping, and peeing machines (well I think everyone knew about the peeing part.) In fact I am sure if scientists did a study they would find pregnant women release as much CO2 in the as burping cows. Though I am starting to wonder if cows keep farting and burping since dairy cows are always pregnant. ¯\_(ツ)_/¯ But the only thing pregnant women don’t do is poop apparently.

I keep reading book and after book, blog after blog about how constipation is going to happen to me. I laughed, “Poor naive people, I’m VEGAN. Do you even know how much fiber I eat?!” Until one day I realized I went a whole day without pooping… which was a little disturbing. I felt a sudden need to buy prune juice and bran flakes to help out. I am much too young to be worried how many times I poop in a day, or week. Or maybe me worrying about gross body fluids is just preparing me mentally for dealing with a baby’s disgusting body fluids? Oh in case you are worried, I am doing fine. Everything is working right on schedule.

It came in the middle of the night:

I am fairly certain my tummy has been growing in the middle of the night. No joke, one morning I woke up with the sensation of rolling around on my tummy as if I was on an exercise ball. Which is bizarre since my stomach was even smaller than it is on the photo above. It is hard to comprehend the idea that a living thing in growing in my tummy. Yes, you know there is a baby in there, but I find myself always being weirded out by how “hard” my stomach is. I mean, if my stomach has ever been this big it has been because of food, and it can be easily squished.

I need a drink… a nice bitter one:

I can say that I miss a drink. I love alcohol, but I never needed it to “take off the edge.” I just loved the complex flavors that they would have from fermentation. So in many ways, I think it am going a little nuts without it. Why? Well, many people know that booze is off the table for pregnant women (depending on your doctor and culture) and people need to be careful about drinking caffeine.

I don’t drink coffee or beer consistent enough to consider it a need, so I skip it. And let me tell you the options are almost all sweet. Soda, fruit juice, sweet tea, kool aid, and it goes on and on. No sour, no bitter, no complex flavors. Okay sure there are healthier things out there like kombucha or freshly squeezed juice, but both are off limits since they can harbor potentially harmful bacterias. Cool. And when I do find drink that are a little sour, bitter, or complex, they are sweetened with sugar or technically have caffeine (iced tea?)

I am reaching the point of desperation. Yes, I still drink coffee from time to time. I mainly dumped it because I brew my coffee quite strong and have no way of really knowing how much caffeine is really in it. As for beer, even though many studies say that occassional drinks aren’t a risk to the baby, I can’t shake that feeling. Or worse, I wouldn’t be able to take the social stigmatism. So I am left googling “best alcohol free beers” in hopes to get my hops fix, and I am even thinking if dog beer would be worth my time. (Answer probably not)