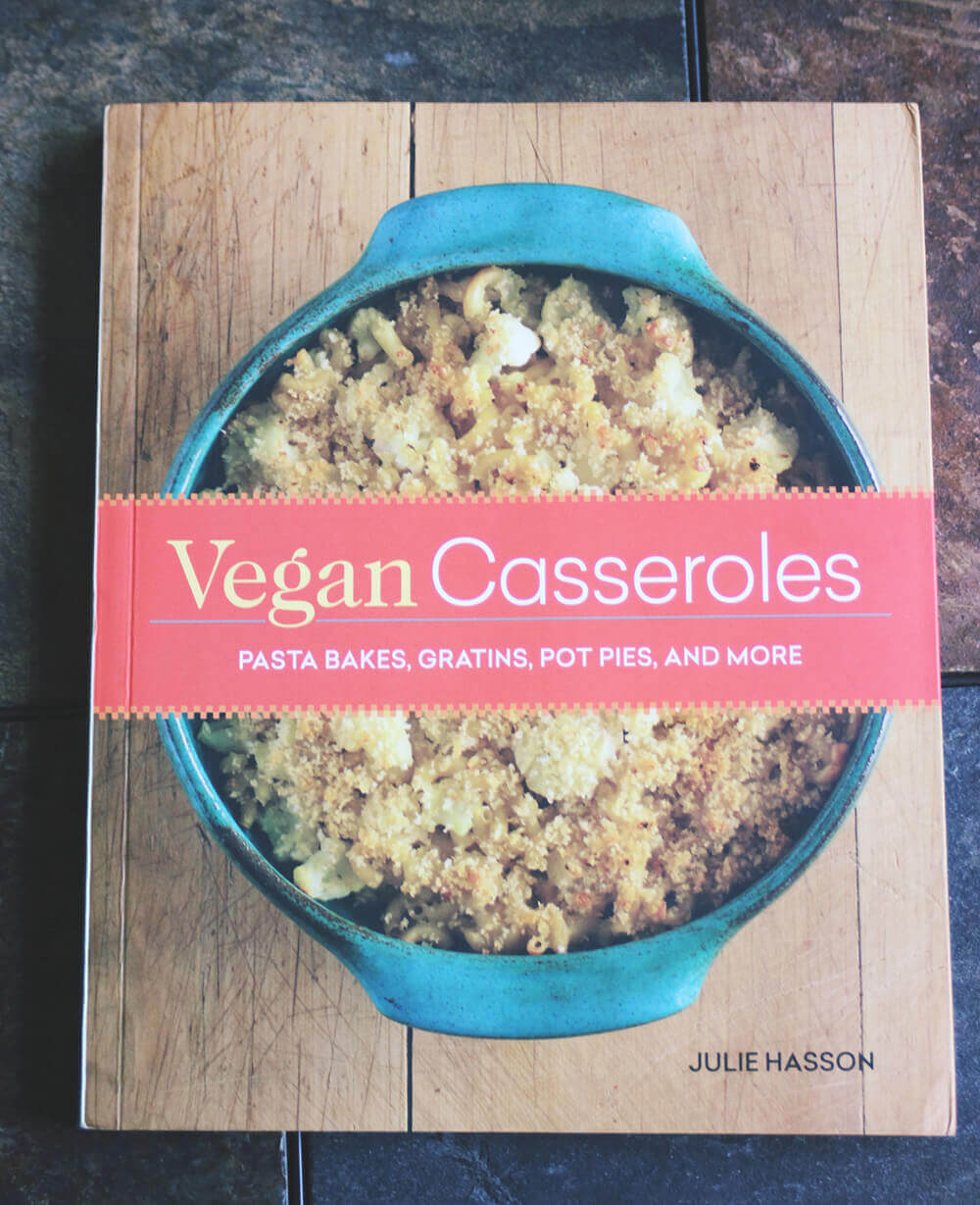 Boozy Baked Penne with Caramelized Onions
Section: Pasta Casseroles
There wasn’t much convincing to get me to cook this dish. I love mixing beer with my dinner. And I thought that a nice pale ale would taste great with a cheesy sauce. I was blown away with this dinner, grabbing seconds. It comes together pretty fast, and can be made in one pot if you have time to kill (cook the onions, then put them aside, then use the pot for the pasta, then to cook the sauce) I will definitely add this to my “must make again” list of dinners.

Bean and Rice Casserole
Section: Old Favorites and new Twists
Recipe: Vegan Outreach
I’ve made rice and bean casseroles before. They are usually pretty simple, using stictly rice, beans, stock and tomatoes. And I remember a recipe took about an hour and a half to bake. Ouch. So I was surprised by this recipe. It used pre-cooked rice, and canned beans, which is great if you have leftover rice (or purposefully made extra rice). What really makes this recipe “odd” is that it is more like a cheesy nacho dip that could be called a meal. Instead of being based on tomato flavors, this one has a thick cheesy sauce. It was really delicious to serve with some tortilla chips and salsa. The salsa really made it, giving a little cold tartness to a hot creamy dish.

Bumbleberry Cobbler
Section: Dessert Casseroles
Recipe: Fran Costigan
This dish is delicious, and easy to make. The mixing part is fast, but the baking takes about an hour! The result is worth it, and I made it for my family Easter get together. I was the only one heading home with an almost empty dessert dish. My only problem is Julie’s classification as a cobbler. This isn’t. A fruit buckle is probably a better term for this dish, as you pour the cake batter in, and the fruit sinks in it. Regardless, this dessert is easy and delicious. And better yet, she offers an alternative to margarine, which I used (coconut oil)

Chickpeas with Rice, Dill, and Tomatoes
Section: Vegetable Casseroles
This is another recipe that is “easy” if you have all the food pre-cooked. This is a great way to use leftover rice, and a dish that would shine when tomatoes and dill are in season. I was surprised that only two small roma tomatoes added plenty of flavor, and they weren’t even in season. My only problem is the practice that you add only half of the tahini sauce, then use the rest for pouring on the finished casserole. I had a very thin sauce, so I can’t imagine it doing much to keep as a “dipping” sauce. I found myself just pouring it all in the casserole before baking, and I thought the results were good.

Creamy Spinach Florentine
Section: Pasta Casseroles
Recipe: Vegan Richa
This was a super easy dinner to put together, especially since it used frozen spinach. No need to chop or cook anything. In a way, if I wanted to use fresh spinach, it wouldn’t of been too much extra work. And you can use one pot, boil the pasta, drain, then cook up the sauce. Out of the other pasta casserole (the boozy pasta) my husband preferred this one. I don’t blame him. It is incredibly creamy and delicious. It will most likely be made again, possibly for a family function.

Nacho Tots Casserole
Section: Old Favorites and new Twists
As a girl who never ate casseroles at home (at least the kinds that would use a can of this, and a can of that stirred together) so I actually had no idea that this was a thing. I thought the author was being creative, until I tried looking up the recipe in a google search.  Realistically, this is a pretty tasty dish. I didn’t get the potato tots to cook all the way, so I super duper recommend thawing the tots, like room temperature thaw. Otherwise, just baking longer does the trick. This is a super flavorful and easy dish to make and I would have no problem making this for a vegan-a-phobe.

Shiitake, Rice, and Green Bean Casserole
Section: Vegetable Casseroles
This recipe takes a very long time if you make everything from scratch the day of. If you cook the rice, boil the green beans, etc. The dish also took longer than normal because I actually had to make milk for the dish for the sauce at the same time as well. But if you have the rice already made, the dish really doesn’t take that long to put together.  The dish reminds me a little too much of a green bean casserole, since it has the mix of mushrooms and green beans. The rice offers a something more filling, giving a more complete meal. I switched out the soy curls for some seitan that I made, and put some puffed rice on the top for texture. In the early introductions to the book, Julie suggests you can add any sort of topping to the recipes, so I thought I would try it out. I can say it really added a little extra something to the dish.

Veggies and Dumplings
Section: Dutch-Oven and Skillet Casseroles
This dish is amazing. I’ve loves my mother’s chicken and dumplings recipe as a kid. It was what she would always make when one of us got sick. Most people grew up with chicken noodle soup, I had chicken and dumplings. But it seems that drop dumplings aren’t a big thing anymore, so when I saw this recipe I went nuts. Personally I think this is a little bit of a stretch to call this a “casserole” and in the book she says that the recipe originally appeared in her book Vegan Diner. Basically this is made only in a pot, and doesn’t go into the oven. I’m fine with that. This was pretty easy to make, but I think there could of been maybe a little more flavor in the “soup” part, and I would recommend trying to keep the dumpling drops as small as possible. It’ll make eating much easier.

Note About the Book: This book was received by a blogger’s book giveaway, and all options of the book are honest.