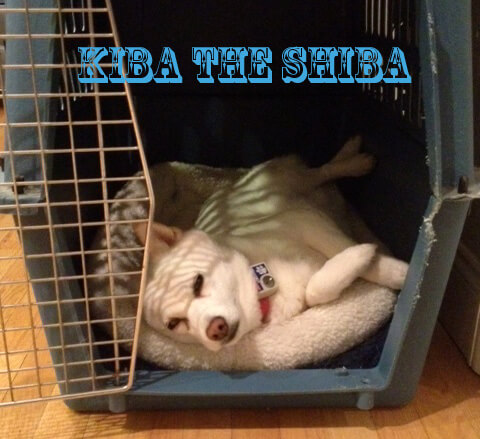 I recently had the pleasure of watching over my friends adorable little dog, Kiba. He is simply one of the sweetest little dogs I have ever met. I have known Kiba since he was just a pup, and I consider myself lucky for being able to say so!

Morgan brought him home when we were in high school, just around the same time that I got my cat Miso. He was the cutest little nugget I ever did see! He is a white Shiba-Inu and he loves chicken. “Chicken” could mean any sort of treat though so be sure that you are giving him something extra delicious when using that word! 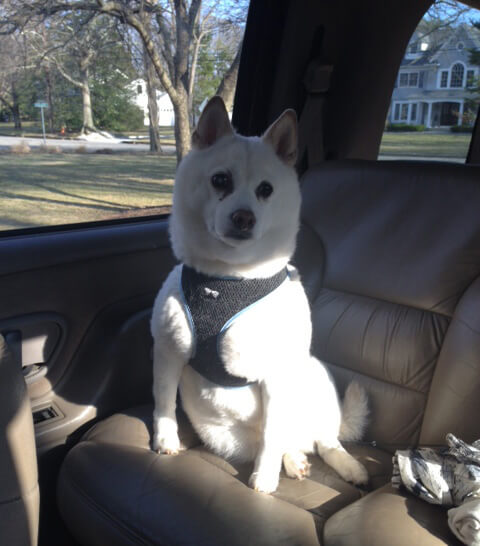 Kiba has one of the best dispositions I have ever witnessed in a dog. He has always been an affectionate little guy even if it’s only for a few minutes when greeting you. He does tend to be a little more stand-offish or independent, but that seems to be a trait of most Shibas.

I have always loved watching over Kiba when his family is out of town. He carries a calmness with him wherever he goes, and if you’re ever having a rough day all you would need to do is pet him or brush him. It’ll end up making everyone feel better!

Kiba went blind a few weeks ago and it was devastating for his human family. He’s had glaucoma in one eye for a little over a year and he needed eye drops to keep it from hurting him and spreading into his other eye. Glaucoma is a condition where pressure is put on the eye (or eyes) which causes insufficient fluid drainage. His family was taking him to the vet regularly to check on his eye pressure and to make sure that his other eye was fine, and when his owner, Morgan, was home for 4th of July weekend he had already been to the vet and everything checked out until later in the evening. I was so worried about everyone involved – it’s a very tough thing to try and help someone who has a hard time communicating.

I went to go visit everyone for a barbecue the next day and I think he was as excited to see (or sense, in this case) me as I was to see him! I almost expected him to still be getting used to everything. At first when I saw him sitting on the kitchen floor he just seemed as though he was focused. I slowly approached him and said his name when his usual ears-back-tail-wag engaged! It was very good to see that even though he must have been shaken by his new challenge he was able to get in a good mood when people he loved were around. 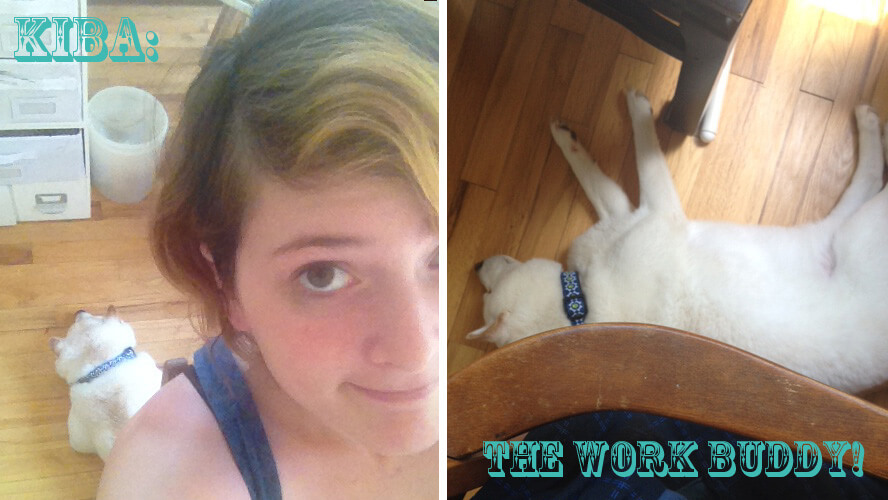 As I said in the beginning of the post – I was overjoyed to be watching over this cutie-pie for the weekend. He was an excellent work partner. We listened to music and podcasts while I worked, only taking breaks to go outside or get treats. Kiba was normally a big sleeper, much like a cat, so the fact that he napped for most of the day didn’t worry me so much. I definitely tried using my voice a little more with him. He got used to going down the stairs really easily and I think a lot of his knowledge of where things where in the house was from memory. Every once in a while he would be slightly off track and bump into something, but for the most part everything went smoothly.

I did my best to try and make sure to keep his spirits up and to keep him calm. A lot of brushing happened – which is good for a dog like Kiba anyway. Shiba Inu’s have A LOT of fur and they shed much more during the summer than usual. Touch between humans and animals already comes with the added bonus of oxytocin (the chemical reaction that creates positive feelings in mammals) for both parties, so there was plenty of petting going on as well.

Overall Kiba seems to be adapting well to his blindness. Caring for him over the weekend definitely had me thinking more about what I could do to help him and make him comfortable. He is not helpless in any way, but anyone would want to help a loved one with this sort of situation. He is now going out for walks, going up and down the stairs in the backyard and playing with his toys in the house. I am just so happy that he was able to bounce back so quickly.

If you are living with a blind dog or have a dog who recently went blind I am putting some links down below. It’s always good to have somewhere to turn for advice for your four-legged family member!

Living with blind dogs – Petfinder (Some advice and tips from Petfinder.com.)