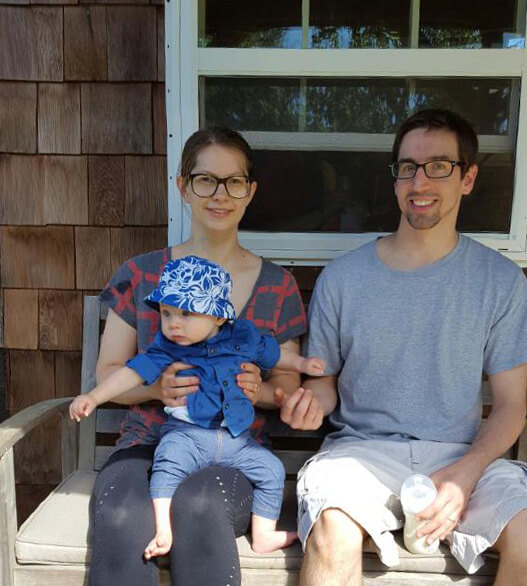 I think this is the first photo of all three of us together!

I love random posts like Friday Favs, Currentlies, Le Love List, The Amazing Five, and RWL so I figured I would make a similar monthly update about me. Especially since I’ve been making monthly updates on the babe, I figured it would be nice to unfold what’s been on my mind this month.

Readings: I just finished Wise Blood by Flannery O’Connor. I mainly picked it up because the trailer and DVD cover for the movie adaptation looked cool. I still would like to see the movie, but the book was interesting. Clearly for a book written in the south in the 50s is going to have some questionable aspects on race, so that was something to take note of. But I liked the surreal imagery and writing style overall. I didn’t LOVE it since it was so religiously based, so I think some references went over my head.

I am also trying quickly read Baby Led Weaning and Sleeping Through the Night. I am finding Sleeping Through the Night VERY good. My sister originally suggested Healthy Sleep Habits, Happy Child and I found the author obnoxious. I am not the kind of person to get worried, but dear lord is this book is alarmist. And it takes forever for him to get to the point- I mean it is 688 pages long! Baby Led Weaning has been interesting. I think I am going to take the plunge at 6 months with the concept and see how that goes. 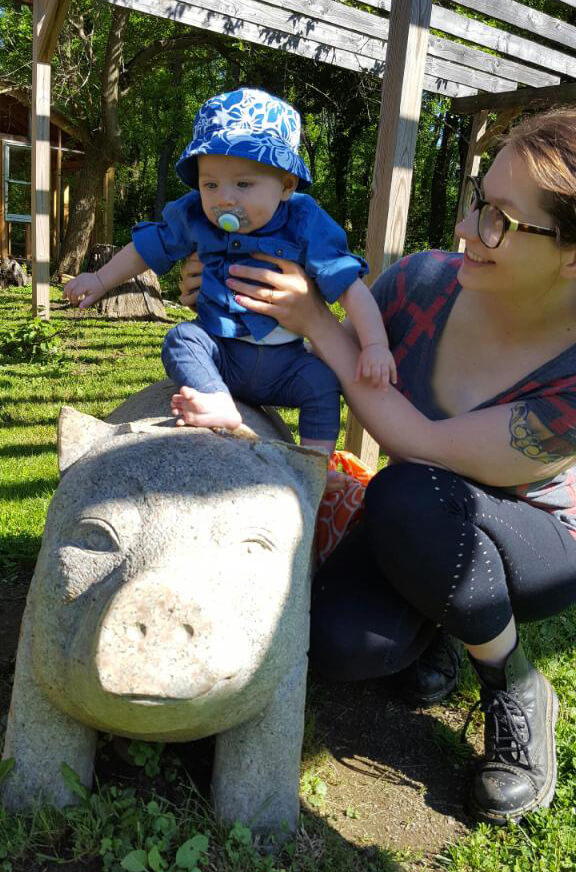 Wolfie’s first picture with the piggie at the farm

Watching: I wrote a review about The Handmaid’s Tale. I feel like I read it before it got really trendy. First time I’ve been ahead of a trend! Okay I know the book is a classic but whatever. There has been a total resurge of popularity with Pence and Trump in office. The TV series is super creepy and way too relatable. I think seeing actors in modern day clothes (rather than me picturing them in 80-90’s clothes) is unnerving. Plus there is the whole having a child myself idea.

We JUST finished the newest season of Sherlock. The last episode was AMAZING. It stinks that they only have three episodes per season, especially since it seems unlikely that they will be able to make another season.

And we have been watching the new Bill Nye Saves the World show on Netflix. It is okay. Some episodes are better than others but I do have a few problems with the show. It doesn’t feel like Bill Nye is honestly trying to change the opinions of people. Plus I think it would of been better if they filmed and heavily edited it instead of having in front of a live audience. If those two things changed I would of LOVED it.

Oh and Master of None. How did I go so long without watching it? 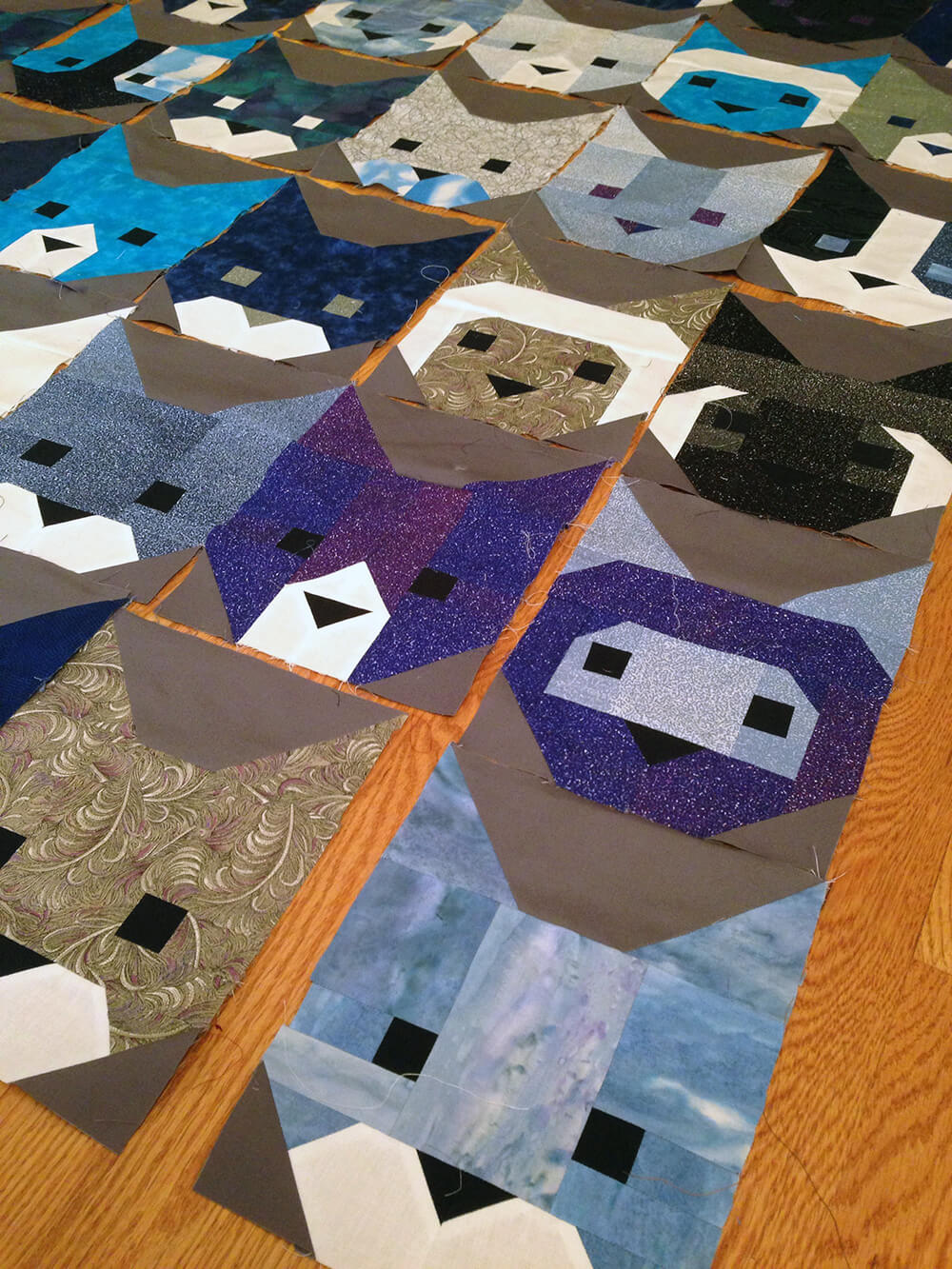 Crafting: I’ve been working really hard on getting my cat quilt done. I bought the pattern a while ago and I made it much bigger than the original pattern. Instead of 30 cats- we are doing 56. It’s huge. So I’ve been going to my Mother’s house and cutting the fabric and she has been sewing it together. It is looking pretty awesome.

Listening: The other day I saw an article about how jpop queen Ayumi Hamasaki is almost completely deaf. Alexa and I were pretty big fans of her music from 2010 and earlier. After hearing this news I decided to go back and listen to her newer stuff. Which she released A LOT of stuff in the past 7 years. Funny thing is that ALL of her music is on Spotify. Wut?! And Avex finally put full length music videos on their YouTube site (or PV- promotional video for the Japanese). Watching Evolution I wonder why it was my favorite video of hers. For anyone who isn’t a jpop fan, Ayumi Hamasaki is often compared to Madonna. She has evolved over the years and is known for shifting image. Her voice is very nasally so you will either love her or hate her.

Podcasts: I started to listen to The Longest Shortest Time and their most recent episode is part 5 of their Accidental Gay Parents series. So I downloaded the first episode. OMG- so many feels. It is such a heartwarming story and it got me all teary eyed. I strongly suggest you go and download the first episode and listen. I am sure you will immediately downloaded the second. 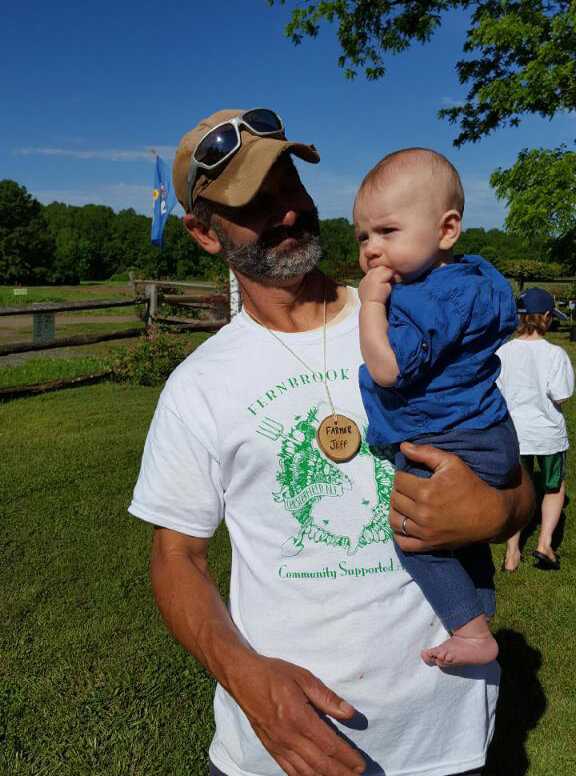 Jeff is the head farmer at our CSA. He is meeting Gavin- the third generation at his farm.

Eating: For my birthday I got a rice cooker and a slow cooker. This is REALLY nice because my biggest issue with cooking is about being able to turn the stove off if Wolfie wakes up early or feeds for too long. So I made vegan chili, vegan jambalaya, and pearled barley. Now I need to think more about how to work my CSA shares into my meals.

And since it has been getting warmer I’ve been making a LOT of ice cream. There is now space in my freezer for the ice cream maker so I’ve been using it! Mostly I’ve been experimenting with cereal milk ice cream, but I also made cheesecake cookie and cream ice cream that my husband loves.

CSA: We just started our first week at the CSA. Not much, but that is expected in the spring. I think the weird weather isn’t helping either. There has been lots of rain (yey!) but it was really hot then very cool. So all we got right now was two bunches of radishes, one bunch of kale, two heads of lettuce, and a small bag of broccolini. I’ve been eating taco salads with leftover chili, salsa, blue corn chips, and vegan chorizo with the lettuce and radish greens. There was some stir-fried broccolini in a sesame sauce. And I honestly can’t remember what I did with the kale. XD

Posted by Jennifer in This Month In Tags: baby led weaning, bill nye saves the world, flannery o'connor, sherlock, sleeping through the night, the handmaids tale, this month in, this month in jen, wise blood