Blog Recipe Round Up: Tomatillos

My goodness it has been a really long time since I’ve done one of these! I always try and write a review with any recipe I try online, make a category and hope they build up enough to be it’s own post. But that doesn’t always happen. Luckily my CSA forces me to try and figure out what to do with all these tomatillos so this post has been in the works for TWO YEARS!

Why did this take so long? Well I wanted to feature recipes that weren’t just salsa verde. I mean I made my own salsa morado, but I mean- it is just a salsa verde XD So I give you quite a round up! I hope you enjoy it, and there is even a sweet treat as well! 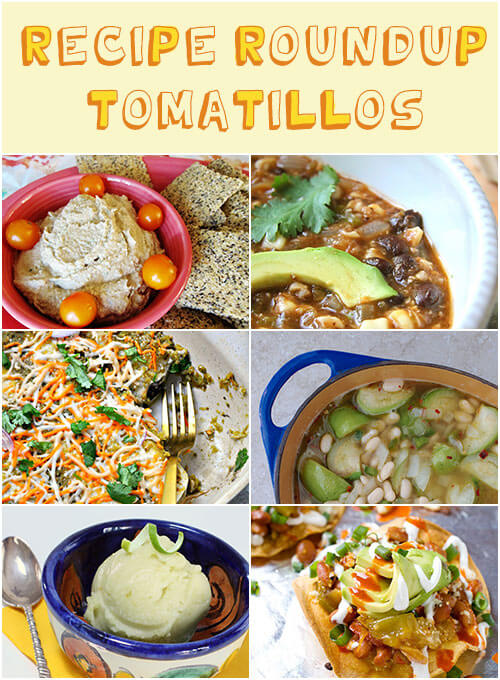 I am frequent reader of Fragrant Vanilla Cake and saw this recipe using tomatillos in hummus. I knew I had to give it a try since it is an interesting way to eat the fruit. The recipe is pretty easy, roast tomatillos, blend with the hummus ingredients, serve. I have to admit this is a delicious and tangy hummus. Very different than what most people are use to for their hummus. I could picture myself just eating it as a dip with chips.

But I used it mostly in wraps with breaded green tomatoes, lettuce, cherry tomatoes, and avocados. But I could use it in sandwiches, and a bunch of other ways. What makes this hummus so nice is that it is sweet and tangy but has lots of protein, so you get food that is nutritionally sustainable and filling.

This is pushing the definition soup. It is more like a stew since it is so thick. It is indeed tasty, but I think there should be a little more broth to make it by definition a soup. Overall the dish is super healthy and full of vegetables and fiber. I think the longest part is getting all the vegetables prepared, especially since it calls for fresh corn. Because of this I think I would double the recipe next time so I could have leftovers to eat.

I also would add more tomatillos. Yes, you can taste them in the dish, but I wish there would of been more. I mean if you have tomatillos in the title, I better be tasting them. I think I ended up using more tomatoes in the soup than tomatillos! Aside from that gripe- I would give the dish a thumbs up on making it again.

Looking at the recipe I felt like I probably should have a little more veggies in there, so I took away some of the beans, and added some sauteed sweet peppers. Also I didn’t use the suggested hot peppers in the sauce or any added salt since I was going to feed it to a 10 month old. Even without the salt, the dish carried itself quite well, but something to keep in mind with the spice levels.

Overall I loved the dish. I will make it again since it is easy to make and easy to prep ahead of time. I blended the sauce in the morning while my blender was dirty from smoothies. I set aside the sauce, so when it came to dinner time I just cooked the sauce, and put together the enchiladas.

My biggest complaint is that she doesn’t specify which sized tortilla wraps. I have “taco” and “burrito” sizes wraps, and I didn’t know which size, so I just made four big enchiladas as appose to six. Not the end of the world, but I can’t be the only one out there that didn’t grow up on enchiladas.

This soup is much more “tomatillo-y” compared to the black bean recipe. This one uses a lot of beans and a lot of tomatillos. This is a simple soup that lets you enjoy the taste of tomatillos. Aside from cooking dried beans, the recipe doesn’t take long to make. All I did was soak the beans overnight, cooked them in the morning, then made the short 30 minute recipe. Though you could soak the beans in the morning and cook the soup for longer if you have the time to wait.

My only complaint is that she calls for 4 cups broth, 2 cups water. I feel like just sticking with 6 cups broth/stock would give a fuller flavored soup. Maybe it is to save people money? Most stocks are sold in 4 cup containers. Who knows. I didn’t read the 2 cups water so at first I had a very thick soup. Oops. But I really liked the recipe. Full of flavor, simple, and easy peasy.

Bottom Line: Super healthy and yummy soup. Would use all 6 cups of stock instead of part water.

Sometimes recipes are so simple I find a hard time with them! Enter this recipe for a Green Apple and Tomatillo Sorbet. First what I ended up with was delicious, but there was a lot of last minute changes that I had to make.

The first change I had to make was that the portions on the site didn’t add up for me. It should I should of had about 2 1/2 cups by the end of the cooking process, but I had more like 1 3/4 of a cup. Eek! I quickly doubled the apple and tomatillo, started to cook them again, and got about the right amount. Blended it up and popped it in the fridge. Then when I put the sorbet in the ice cream maker, there didn’t seem to be much. This is something that annoys me with ice cream recipes. It takes a lot of work to make ice cream, and making just enough for two servings is a pain. So I quickly dumped some extra coconut milk into the ice cream maker.

The end result? A SUPER delicious recipe. Since I probably cooked the apples too much, I got a tart but semi caramel-like sorbet. The best part is that the ice cream kept really soft in the freezer, one of my first times doing so! I think adding the coconut milk in the end helped with the tartness. If I make this again, I will totally make some changes to the recipe, and you might find a similar recipe on the blog next year.

Bottom Line: Great inspiration. Overall great results, not sure if I will make this recipe 100% exactly the same

I took some liberties to switch this recipe up a little. Yeah, I got a little lazy in the tostadas part and was starving. So these got transformed into tacos. Oh well. I tried to keep the toppings in the spirit of the original post and let’s face it, a corn shelled taco isn’t too different from a tostadas. Personally the dish probably would of worked best in tostadas form, so keep that in mind.

Naturally my main complaint is that recipe calls for x amount of tomatillos, not going by poundage. I added more to the recipe since the tomatillos picked from my CSA were a little smaller than most commercial grocery stores. Aside from the resulting faster cooking time, everything worked out great! The whole recipe will probably take an hour from beginning to end but is very easy to get the prep work done, and has a lot of hands off time.

I really love how there were bursts of tomatillo flavors hidden in the pinto beans. I think there should be a little bit more tomatillo to bean ratio, but aside from that it is a great mix. As mentioned I made tacos instead and paired them with lettuce, avocado and tomato (no sour cream mix.) I will be adding this to my rotation during the next tomatillo season at my CSA

Bottom Line: Takes some time, but overall very easy and hands off.