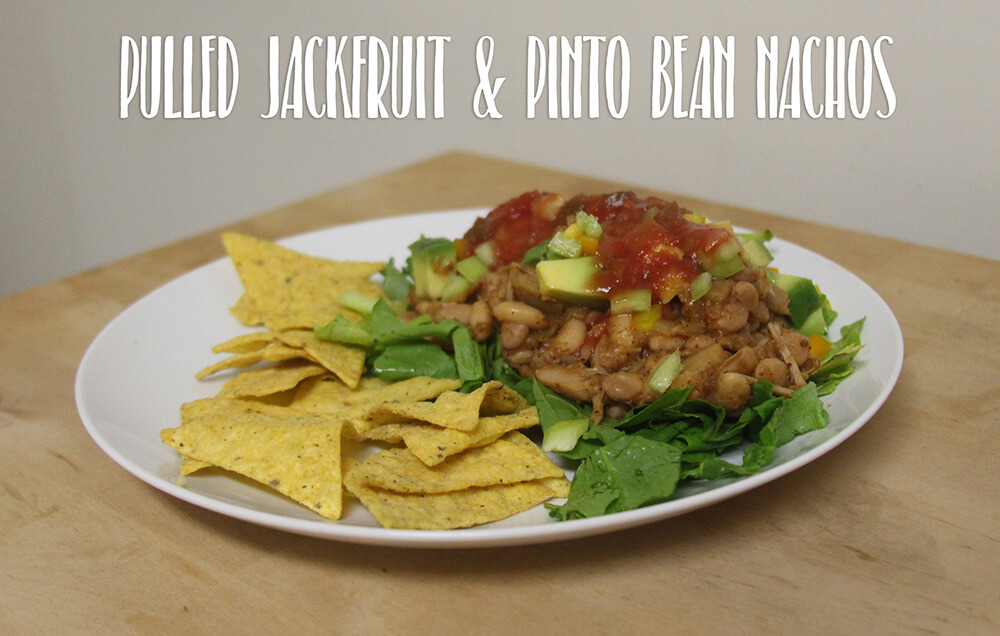 One of my family’s traditions makes my husband livid. I mentioned how I don’t like most holiday foods (just give me the booze plz!) but I love my family’s tradition of Mexican Christmas Eve. In my husband’s defense, our tradition is pretty weak. It started because my Aunt brought a piñata to Christmas Eve since she was in Mexico. Clearly if you are going to have a piñata you are going to serve Mexican food- or whatever American’s think is Mexican food. We were kids, so the tradition went for awhile, and as we got older we all decided we rather eat tacos over… whatever people eat the day before Christmas. 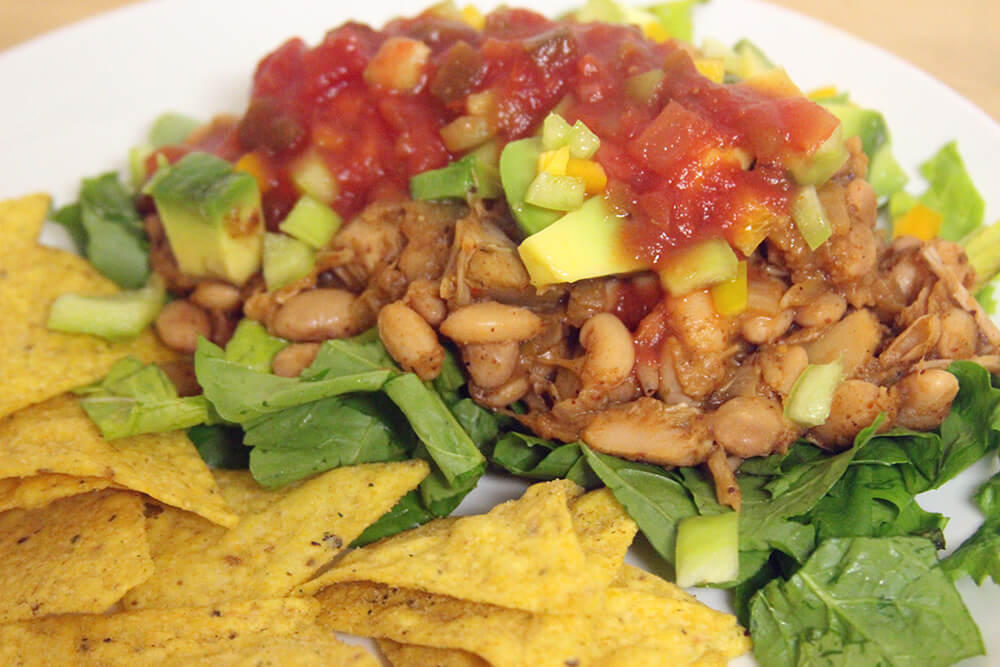 One of our family staples is chalupa. Now I can safely point out- this is not authentic at all. Not even in the “it’s made with pork so a vegan version isn’t authentic” way. No apparently when my Mother and Father lived in Phoenix Arizona, she was given this recipe. It was slow roasted pork recipe with beans that she served over chips with lots of toppings. Turns out, REAL chalupa refers to the shell, not the pork like I always believed. I can say I was pretty sure that the originals weren’t being served on doritos, like we did. 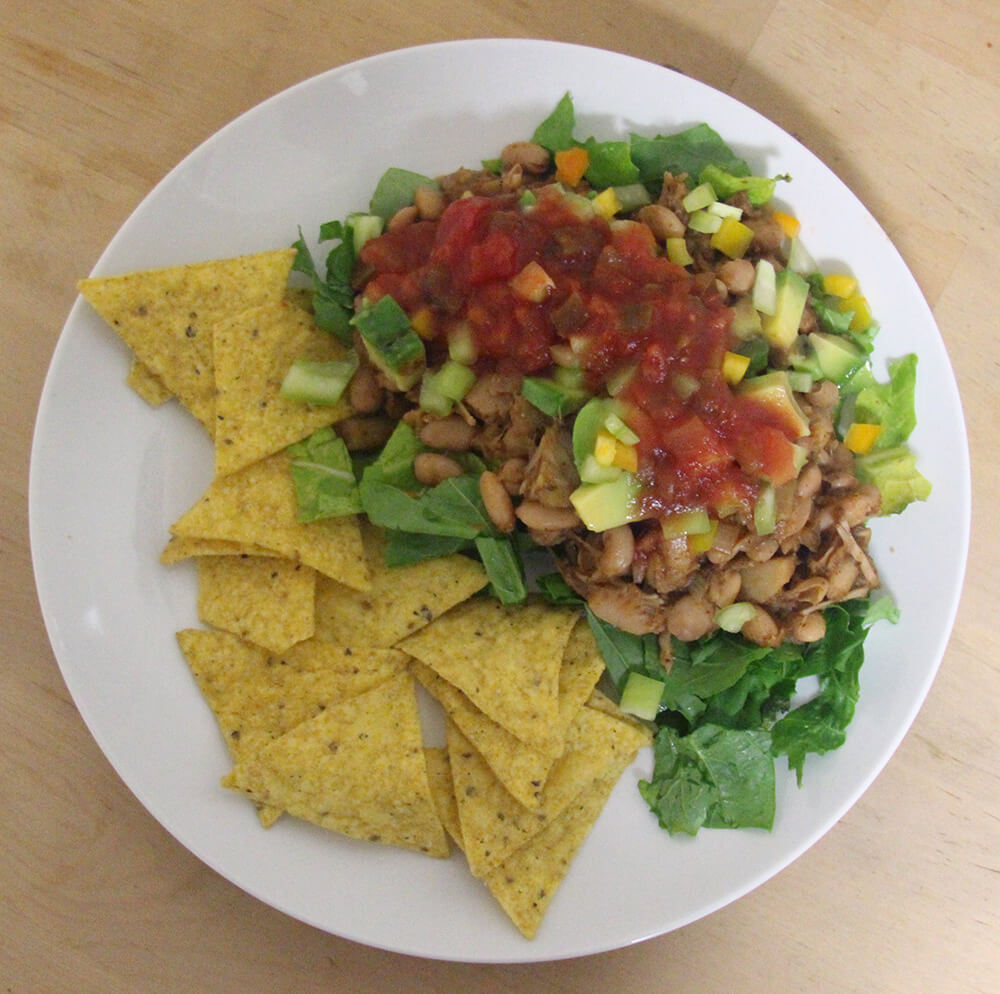 I have NO idea how wide spread this dish is. I assume it is largely known in the Southwest, and after some Googling, I do get some recipes that looks like the kind I grew up with. And hey I found one that even serves it over some fritos. Now that sounds American. The funny thing is that I grew up with almost EVERYTHING being made from scratch. Occasionally my Dad would make powdered boxed falafels, and we would use the boxes of couscous with the packets of seasoning, but we never had frozen tater tots, weird casseroles (okay maybe just tuna), not even green bean casserole. So it is a little bit of surprise that we have this family signature dish that revolves around doritos. Yes you heard me. 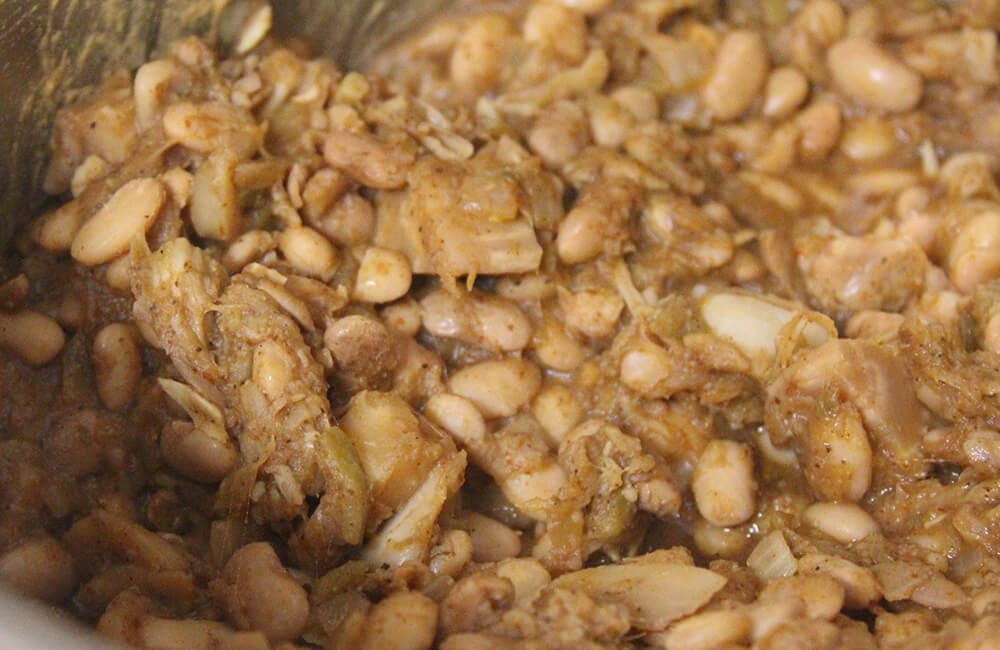 The highlight of the dish is really just you get to eat doritos for dinner. As many people can guess- doritos aren’t really vegan. Almost all varieties have whey powder in them, except for Spicy Sweet Chili. Wanna know something funny? My Dad tends to turn his nose at all the food I make, but he LOVES the spicy sweet chili flavored doritos. I haven’t told him yet that they are vegan. But we have more options, and some that are more healthful.

Late July has some great options out there. They have three vegan flavors- Bacon Habanero, Jalapeño Lime, and Sriracha Fresca (the photos are of the Jalapeño Lime BTW.) I think I remember reading that Beanfields have ALL vegan flavors. Please feel free to correct me if I am wrong. But they have nacho if that is what you are looking for. You could easily just use regular old chips and there are other brands out there that make flavored chips that are vegan. 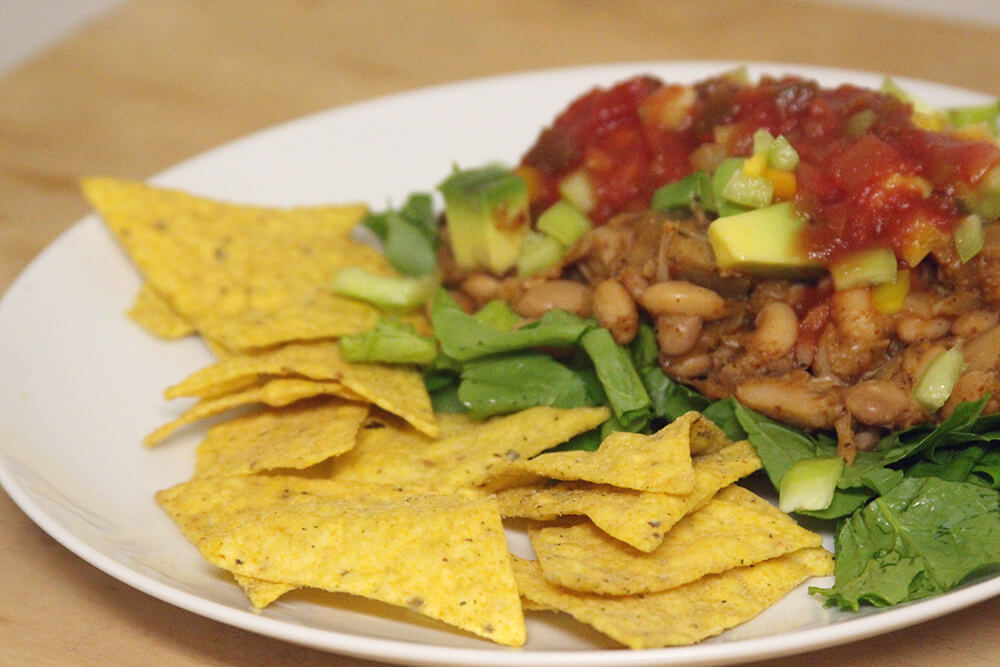 Aside from junk food, the other reason why this is such a staple in my family is that it makes so much. You can make a huge pot and it feeds an army. Even my vegan version makes a whole bunch. And they are a lot like tacos, everyone can top them in a way they like. Which pretty much means you want to serve this dish with other typical taco toppings. I am talking about salsa, chopped tomatoes, onions, bell peppers, daiya cheese, vegan sour cream, lettuce, and avocado. 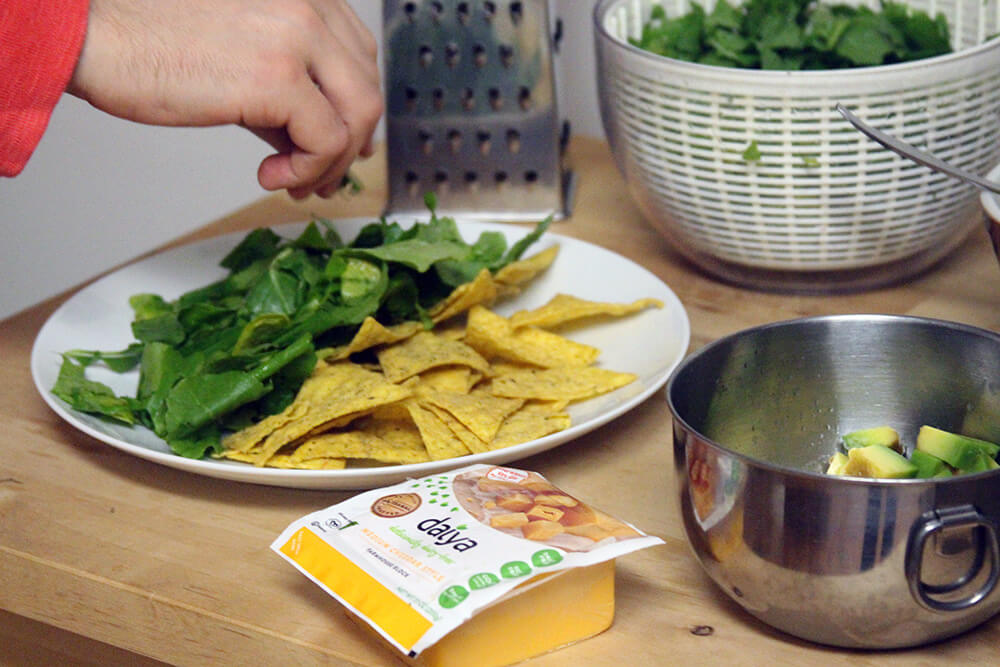 There are a few methods to the madness. You can either pile your chips all on the bottom, and top it off with everything. But sometimes you get chips that are too soggy. Yuck. But I do like SOME soaking of the chips, like maybe a corner. So I like to put mine to the side, then a bed of lettuce. Pile the toppings on the lettuce, and usually the juices move over to the chips. 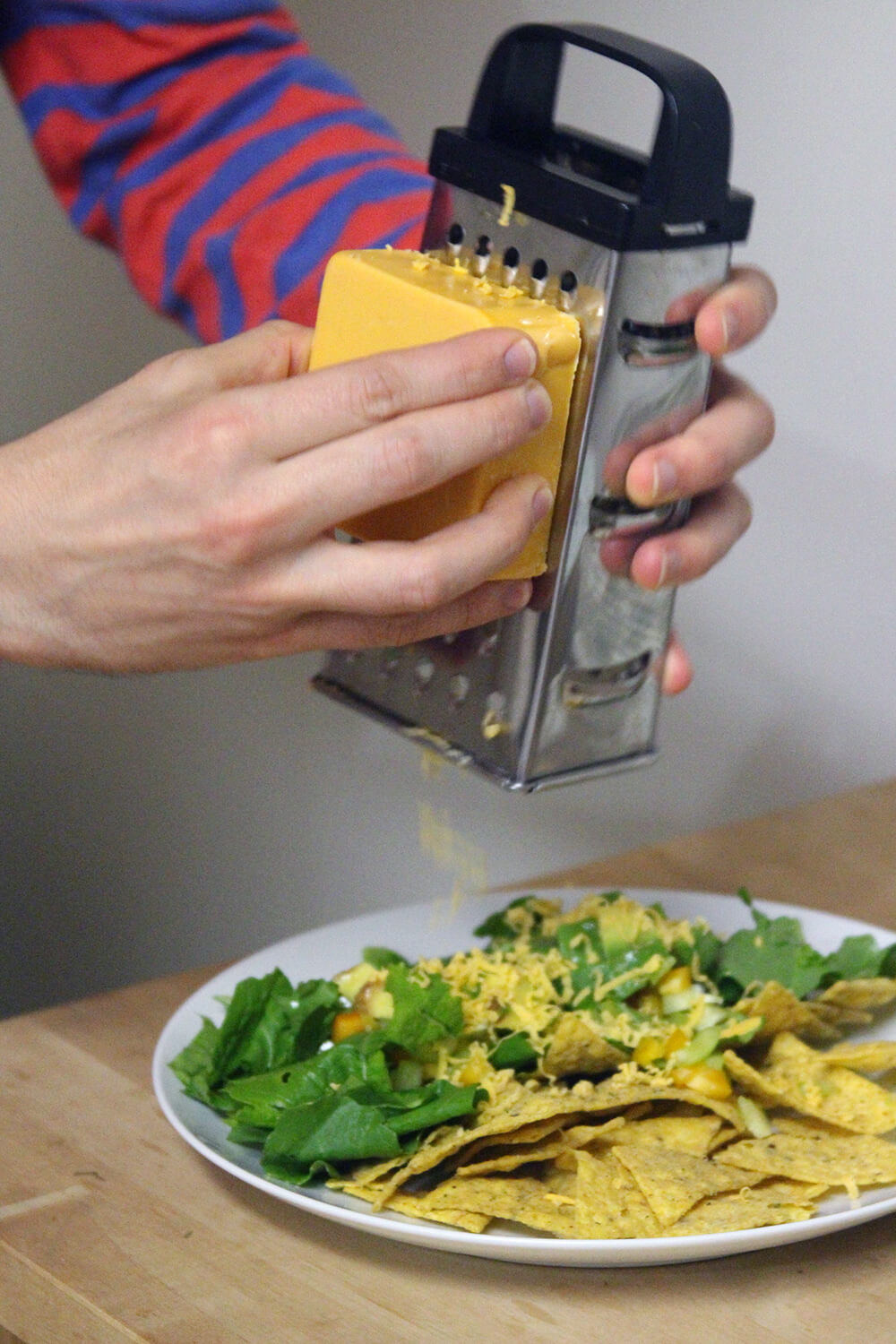 You also need to decide on if you should put the toppings on the top or bottom. The bottom makes everything mix up together really well, but you get to pick a choose a little more if you put everything on top. I do recommend, if anything, to put your vegan cheese on the bottom so you get it all melty and yummy. Nothing is worse than cold daiya. Well, maybe cold cow’s cheese. 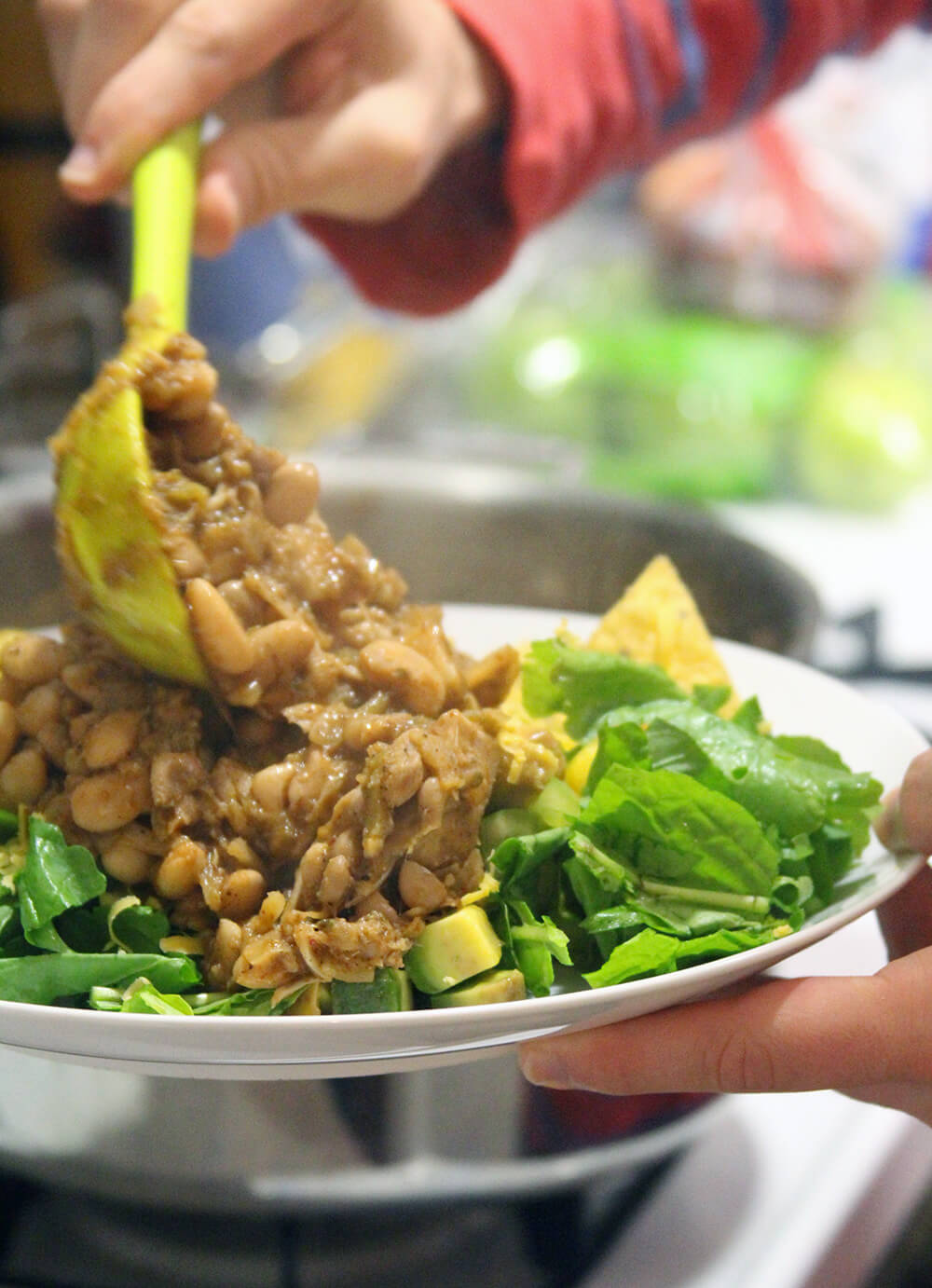 Sadly it is has been forever since I’ve celebrated it. See, Jon’s side of the family usually spends Christmas Eve with each other. But I’ve told Jon that if we ever host the get together, I am making all food south of the border. He knows the threat is real since I am armed with Viva Vegan. I’m going to throw everyone off who brings over some hummus and salad to contribute to dinner. “Oh, so we are having empanadas? Do cheesy potatoes go with that?” Answer- no, and that’s the point.

I hope everyone enjoyed this weird family tradition. I can’t really trace the cultural background for the dish, and there is no real logic to having a “Mexican” Christmas Eve.