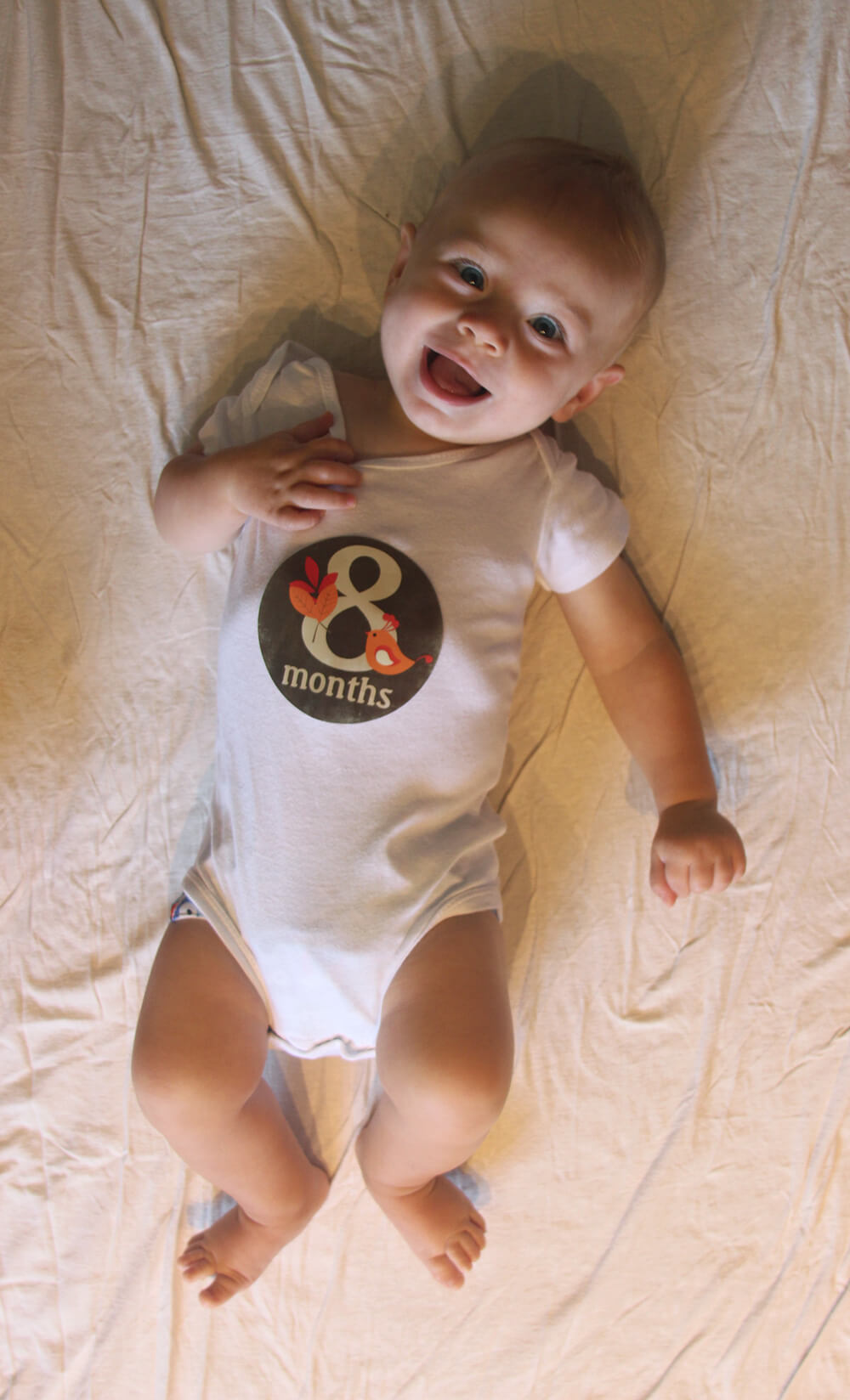 What a month. Wolfie is becoming a little person instead of a screaming lump. And in usual fashion I am very late with this post. Instead of pretending like I am going to just talk about the past month- I will be talking about the past month and a half because HE IS JUST DOING SO DARN MUCH!

SITTING
This is probably one of the first things Wolfie learned how to do this month. It has been a frustrating struggle. He can sit up and that was good enough for awhile. Then he was getting frustrated that he would get stuck either sitting up or laying down.

Well, one day Wolfie was napping while Jon and I were trying to get some things done around the house. The monitor went off, and Jon questioned as to whether or not he should get him. I made an off-the-cuff comment

“meh, he sounds fine, let him play a little by himself.”
Jon replied with “okay…. oh….”
He got up and showed me the monitor. My response?
“Oh… yeah… you should get him”

All you could see on the monitor was Wolfie’s big bald-ish noggin because he’s figured out how to hoist himself up! 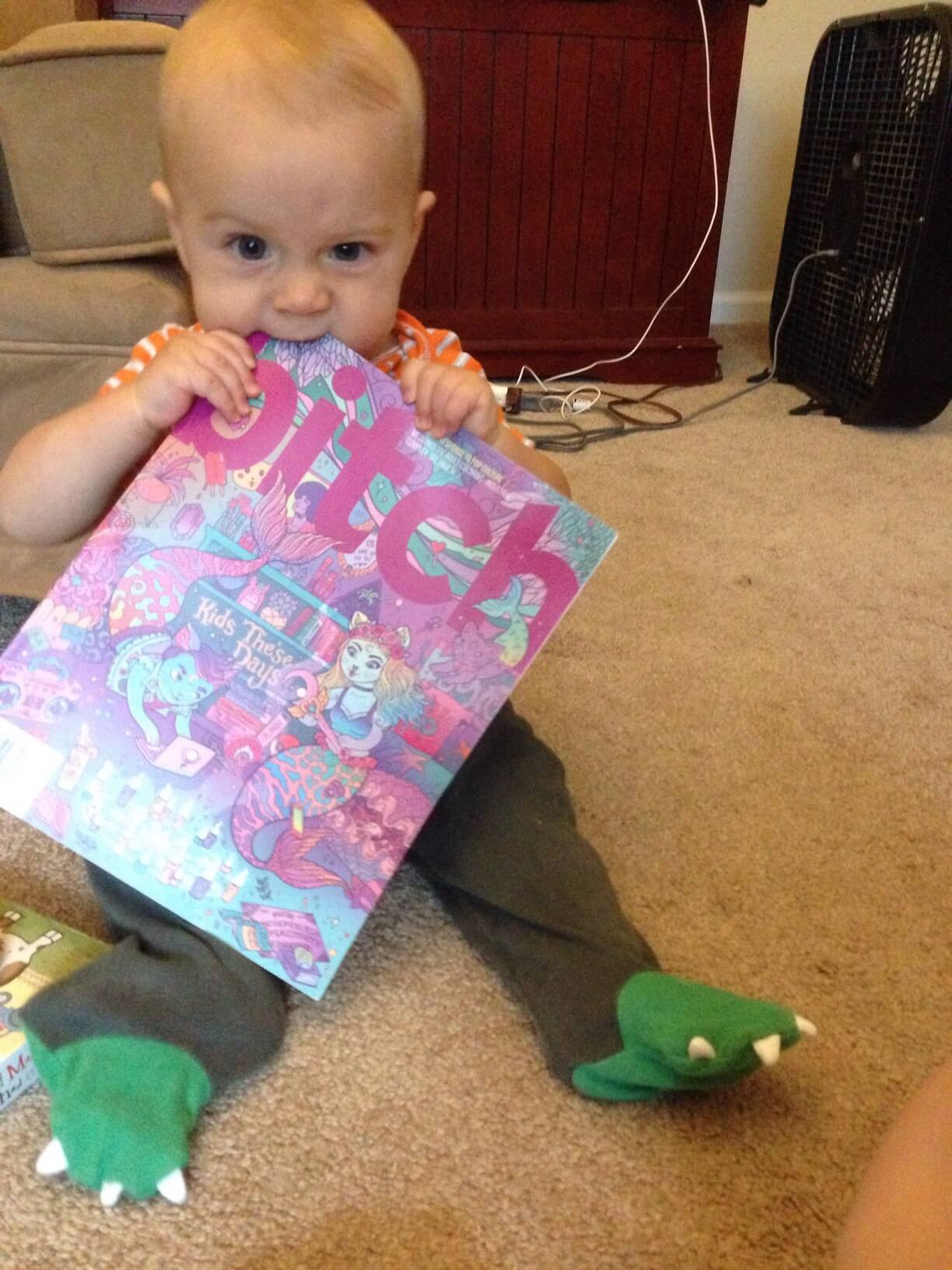 CRAWLING
My last note was “just about to crawl”… mark that down to “nailed it”! It has been so nice to have him be able to move around and gain some independence. Here is how his evolution in crawling has progressed:

Wolfie is now so excited that he is able to crawl towards Toulouse. It’s really funny because he crawls all the way across the room, exhausting himself, then when he starts to get close to her, Toulouse just casually and calmly gets up and just walks away. Better up your crawling game Wolfiecakez.

TALKING
After so many months of being really quiet, Wolfie is starting to babble with intent again. For a long time we thought his first word would be “hi” since he kept making an “H” sound with various words. But, now I think “UP” may end up being his first word. He often says something sounding very close to “up” with his hands up in the air, looking to get held. It is hard to say since he will randomly say it totally out of context though.

He has also learned how to blow out air so we can move our hands over his mouth. You know, like that racist Native American stereotype? It’s only cute because there aren’t any racist undertones when Wolfie does it. It is pretty darn cute when he grabs your hand to make the noise. But he has moved on to making the noise himself with a balled up fist and (on rare occasions) his foot when in the car. 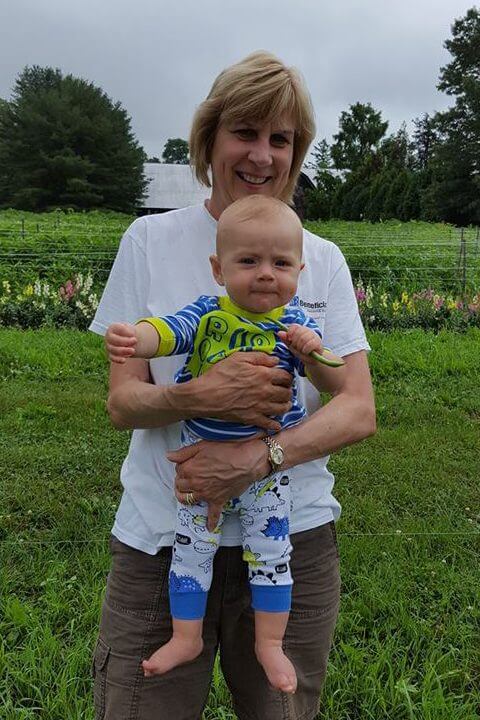 STANDING
This kiddo just wants to walk. The first comments I got when I posted a video of Wolfie crawling were ones about how he just wants to stand. I am pretty sure he has been wanting to stand since he was in the womb (so much kicking!) He is getting increasingly better at standing. He started holding himself up by playing with his jungle toy, but had a hard time grasping the idea of how to accomplish that without any toys around him. Then he started to understand that he could use tables and chairs to stand up too.

The next step (clearly) is pulling himself up. He has no problem using me as his own personal ladder. He’s really started to nail it, to the point that it’s never phased me. Almost everyone excitedly asks if I knew he could pull himself up, and I just shrug my shoulders. Meh. Not impressed. Sure you can use my squishy body to pull yourself up. Until… yesterday morning he started to try and pull himself up from sitting to his knees. After some major encouragement from me, I motivated him to pull himself to a standing position! WHOOO! This morning I even caught him using the glider. So now his crib has been lowered again to the absolute lowest setting, and his video monitor has been moved very far away to keep the cord out of reach.

HAND-EYE-COORDINATION
For awhile Wolfie was clapping but with one palm open and the other in a tight fist. Now he totally has the whole clapping with both palms opened. In fact, the other day I heard a solid “clap” sound.

He is also starting to understand the whole waving thing. But I think it is mostly for himself. Rarely he will wave hello or goodbye. But he has learned to let his arm go limp to make me shake it when out and about.

His little pincher grip is getting better. If you hand him a small piece of food, he will clamp it with his pointer finger and thumb. It’s adorable! Oddly enough any advancement with his hand-eye-coordination seems to revolve around food. When he plays he seems most interested in trying to stand, crawl, walk, etc. Not play with toys. 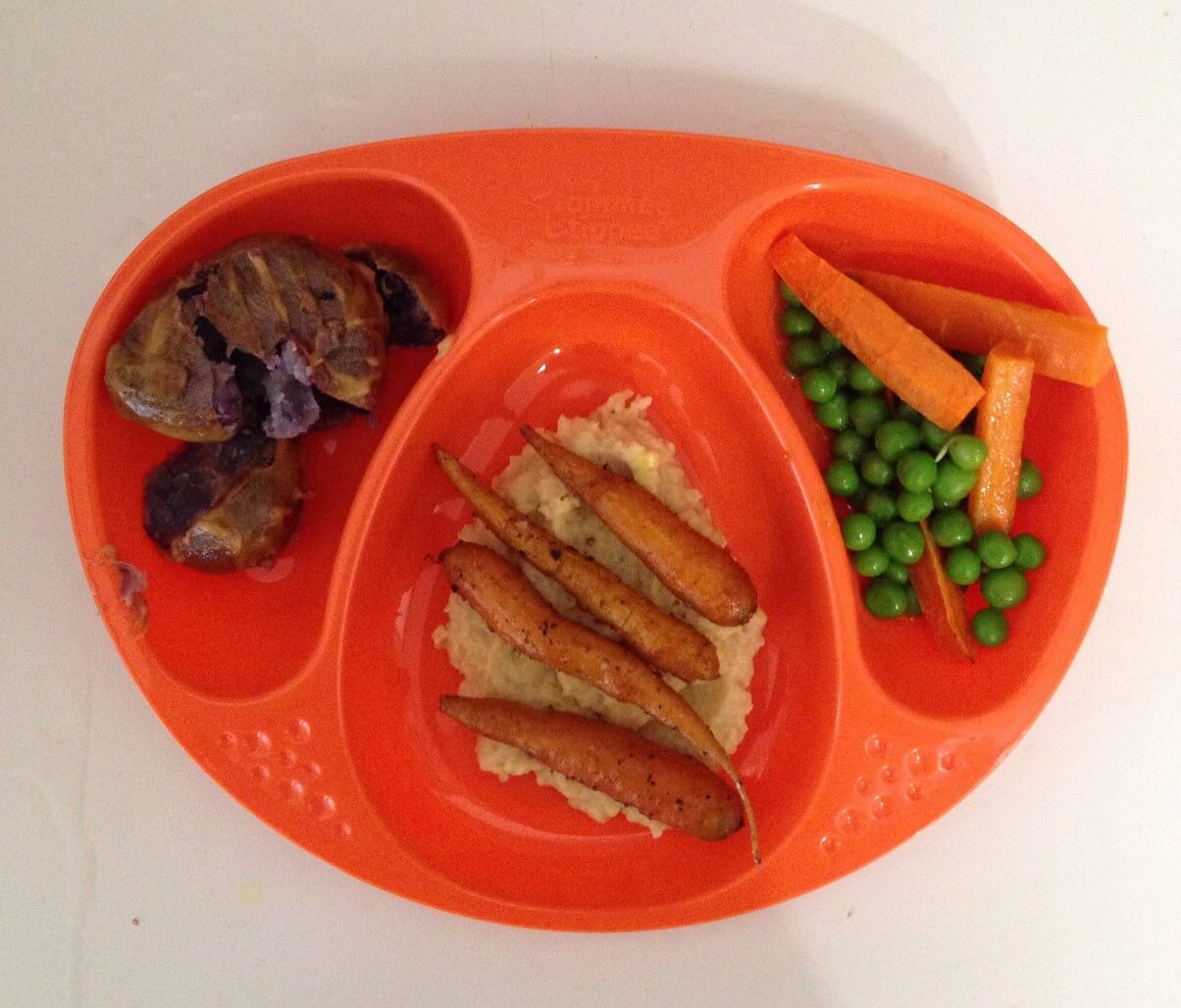 EATING
I think awhile ago I made some joke about ways Wolfie is like an ACTUAL dog. Add this to the list- he has been trying to pick up and eat his spit up. OMFGFDHJ*@#UEJ@## SO GROSS! Spit up is already bad, but he just finds way to make it EVEN WORSE by going for it. You know, like spreading it around with his feet, or chunks of his food. STOP IT! I know you are reading this blog, baby!

So far the only food he hasn’t really been diggin’ has been chickpea-egg-like things. I made vegan omelets and little savory bean muffins. Both he happily ate the first day, but then didn’t care after a day or two. 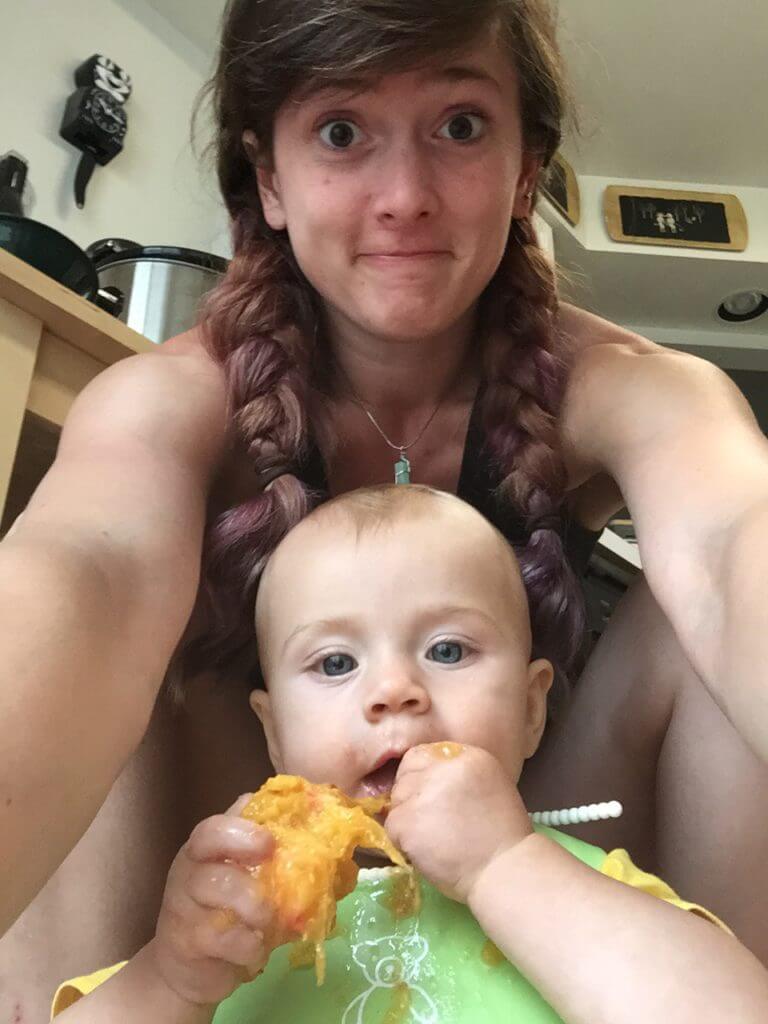 Otherwise he has been LOVING peaches, but sadly, I think we are going to be done with them soon. By the time we go to the orchard again they will probably be all gone. This kiddo could probably eat two whole peaches in a day if I let him. Bananas are another favorite. I think my favorite part of BLW is making lil bb versions of normal food. I got to make ADORABLE little naans. And after going to Vedge, Jon wanted to have some recipes from the Vedge cookbook for his birthday dinner. It was so stinkin cute plating fancy food onto a small baby plate.

HEALTH
It finally happened- Wolfie caught a cold. Back in the day, I am thinking around 6 weeks, Jon got a cold, then I got a cold. IT WAS AWFUL! But somehow Wolfie didn’t get sick, but I remember it was really rough trying to get through the day.

I remember taking Wolfie to the library and him touching all the toys and putting things in his mouth. I was nervous but I didn’t want to be that paranoid parent. Sure enough- he got sick… and so did I… and so did Jon. I woke him up and thought

“your nose is really runny… is this a cold?”.
Answer: yes.

It mostly sucked because it messed up his sleep schedule (which means it messed up our sleeping). He would either nap for 2-3 hours, or only 10-30 minutes. One night he woke up 3 times during the night, bringing back horrible memories of the really early baby days.

I also got flashbacks of the sneaky snot swipes from watching my niece Morgan. She got sick much more often from being in daycare and having allergies. Oh did I mention Wolfie was teething while sick? So there were just constant waterfalls of snot and spit. Have I mentioned how disgusting children are?

TEETH
HE HAS TWO NOW!

The bottom two teeth came in about the week of turning 8 months. Not much else to say other than read the previous paragraph. 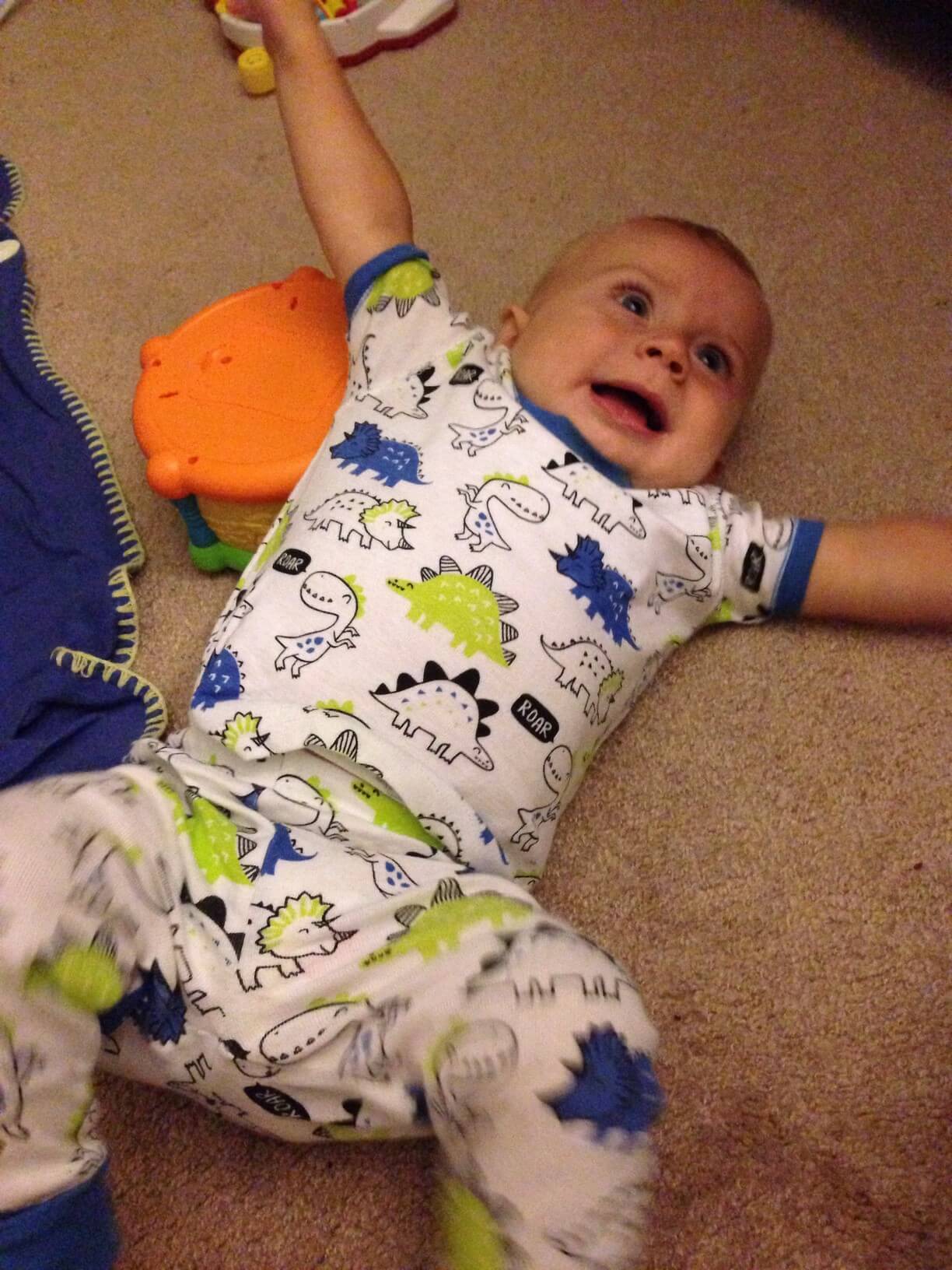 I remember being so nervous that Wolfie would never nap longer than 30 minutes. Gosh it has been such a crummy experience when he was young with napping. Sleep at night- thumbs up. Sleeping during the day, tears.

Aside from him getting sick, naps are getting so much more regular. It started with secured morning naps. Then after getting sick, it seemed like something switched, and he decided “yes, these naps rock” Now I know that I can get two naps in, the morning being much longer than the one in the afternoon. This is the only reason why this post finally getting up …*sigh*. It is nice to have some peace and quiet during the day.