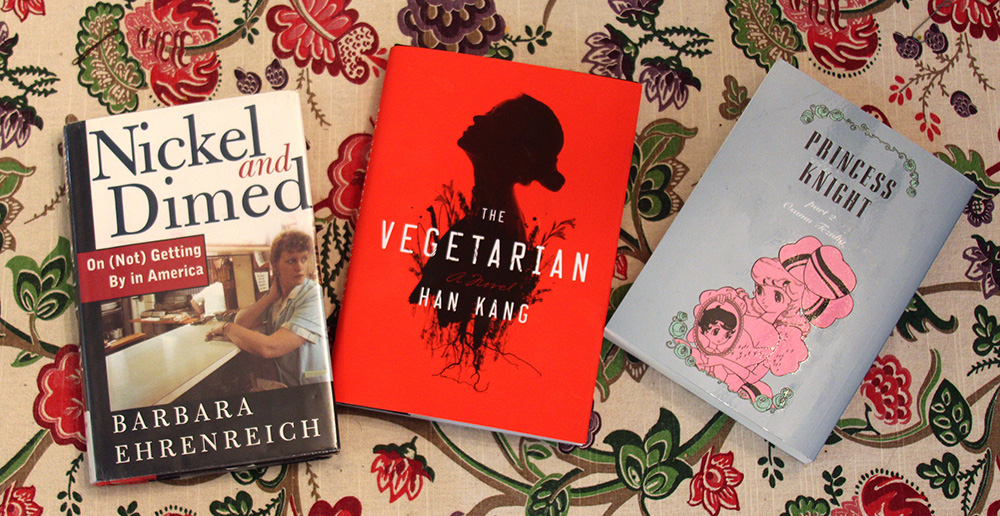 A Bride’s Story, Vol. 1 – I saw this on a list of top comics of 2016 and thought I would check it out from the library. Aside from that I have no idea what to expect from it.

The Developing Human: Clinically Oriented Embryology – This was a birthday gift from my Mother, yup, leave it to her to buy me a medical textbook (she is a neonatal nurse practitioner). I have already learned a lot of new things, and put some of my AP Biology terminology to use.

Hannah Mary Tabbs and the Disembodied Torso: A Tale of Race, Sex, and Violence in America – True crime guys! Actually I am not HUGE in true crime novels, but I do get intrigued by them. This is a book I heard from the podcast Stuff You Missed in History Class and thought I HAD to read it.

What to Expect When You’re Expecting – I picked up a copy from my library’s book sale, and at the time it was the most up-to-date copy. Now a new version came out. I am sure most of the information is the same with some new changes (maybe a section on Zika, and other technological updates)

Nickel and Dimed: On (Not) Getting By in America

Author Barbara Ehrenreich tries to live on a minimum wage paycheck for an entire year. She tries to live in three different places Key West, Portland Maine, and Minneapolis with different types of jobs (waitressing, cleaning, and retail.) She has struggles in each place, but each job and location has their own set of unique problems. Because her book isn’t about people who are making their small paychecks work, it is in many ways flawed. Ehrenreich is very clear that she has a certain set of standards for her way of living like having her own place (as to not blow her cover) and to have her own car (because writing about traveling by bus would be boring.) I think this is reasonable as many middle class Americans wouldn’t consider these things a luxury (unless you live in a very densely populated area like a city.)

I thought the book was really insightful, and very convincing for people who don’t want to raise minimum wage. I think since Ehrenreich doesn’t take in consideration things like disability, family, etc she can make the argument that best case scenario, you can’t live off of minimum wage. She also talks about the fact that many of the businesses that she works for do take advantage of their workers or break laws that protect worker rights.

I don’t like how so many people criticize the book for not being progressive enough. I never like that argument because you can’t cover everything. As a white woman, it would of been inappropriate for Ehrenreich to talk about the extra struggles people of color face with low wages. On top of that, sometimes you need to pick and choose your battles. If Ehrenreich tried to talk about every single issue with the USA’s system she could easily overwhelm the reader.

The scary thing about this book is that it is written over 14 years ago, the current minimum wage wasn’t too far off from what Ehrenreich was receiving. In fact at the time the jobs she worked were usually more than minimum wage at the time. The price of housing and food has only gone up, so things can only be worse for most working class Americans. To me the answer is clear, though most people don’t like it. If a company can’t pay it’s workers more, than maybe we should be paying more for certain products? Probably people who are middle class or higher shouldn’t buy so much stuff? Or maybe that business shouldn’t stay open? The problem is that major corporations that can pay their workers more, it just means the people who work higher up are earning less.

The downside is that I read the older copy and there is updated version on the market. I am sure the newer version talks about points that I mentioned- the cost of living is only going up. I am sure things like Obamacare is also mentioned. I left an Amazon link to the newer edition because I am sure it can only enrich the reading experience. 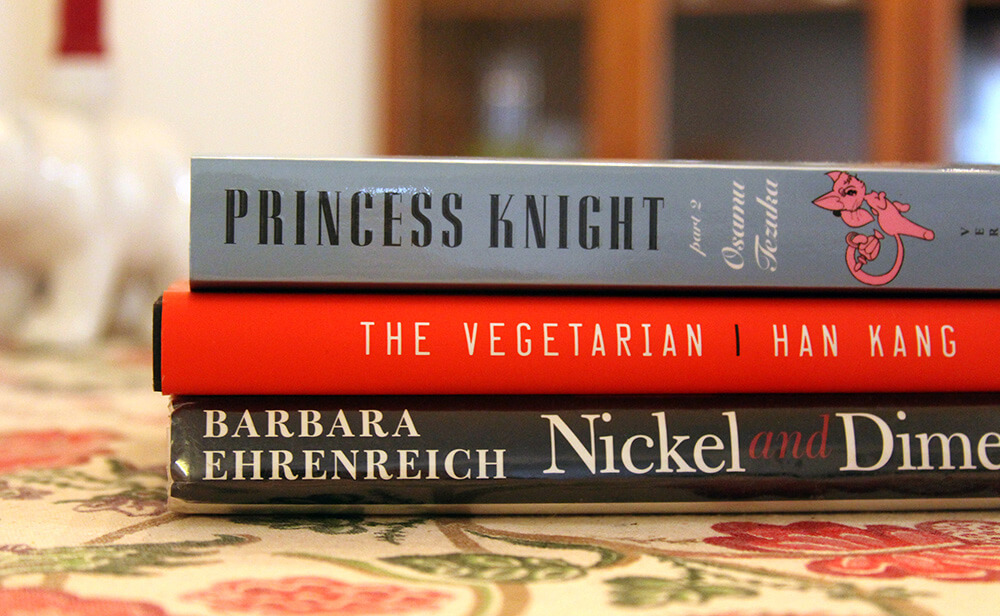 Princess Knight, Vol. 2
This is the second installment to the Princess Knight manga that I read A YEAR AGO! Where does the time go? For the previous book I talked about how I could see modern parrallels with the main character Prince Sapphire with people who identify as transgender. This most likely not the intention of the author, Osamu Tezuka. There is actually more written about how the character Prince Sapphire is the first “gender neutral” character in Japanese mangas. So what is the basic plot line? The Queen gives birth to a girl and the King, scared for his lineage, decides to raise his baby Sapphire as a boy and hide the sex of the baby from the kingdom. As a result, in heaven Sapphire gets both a boy and girl heart, and an angel is sent to Earth to remove her boy heart to become a proper girl. The story is complicated by the fact that Sapphire’s true sex is discovered and get’s overthrown, and Sapphire falls in love with Prince Charming.

My criticism about the series was that there were some gender stereotyping. Sure there was the roles of which genders play, but there was the constant reminder that females are physically weaker than males. So how the did the second installment hold up? Well, in the second book Sapphire’s boy heart is completely removed but is still able to be strong. This I enjoyed. But since she has more or less made that transition as a girl, the story becomes more focused on getting Sapphire and the Prince together.

Well, there is an interesting storyline where an evil queen keeps trying to steal Sapphire’s girl heart for her daughter, who isn’t “feminine enough.” What I liked about the daughter character was that she mischievous and spunky, but never wanted Sapphire’s girl heart. In the end she helps the leading couple, and is shown in a positive light, giving approval that girls don’t need to be quite and reserved. Sadly, she dies because of a weird “connection” to her mother, which does conflict with my previous statement.

Overall I liked the series, though it is a little dated because of the changed roles of women over the years. And I think I mentioned before that it is a little weird reading as a westerner. Tezuka clearly is emulating western fairytales, but seems to jumble Grim’s fairytales, with Disney movies, with Greek/Roman mythology. If you can get past these items, this will be an enjoyable read.

The Vegetarian
The Vegetarian is a book that instantly grabbed my attention. I am a long time fan of South Korean storytelling, as it is usually steeped in metaphors. Then pile on a message about vegetarianism/veganism? Yes please! SADLY… it really has nothing to do with veganism, but everything to do with feminism. So not a total loss right?

The story was originally written as three different novellas, following the life of Yeong-hye once she becomes a vegetarian (or more specifically a vegan.) The first novella is written from the point of view of Yeong-hye’s husband, who is a boring man who has little ambitions. He just wants to work a normal salary job and get married to an average woman to blend in with the rest of society. But one day Yeong-hye decides to not eat meat, which in Korean society raises a lot of questions since food is so largely a group activity (which I’ve written about before on the blog.) To try and get Yeong-hye to stop her individuality he rats her out her family, resulting in a mental downward spiral for Yeong-hye.

The second novella follows Yeong-hye’s brother-in-law who apparently has grown a crush on her. He becomes obsessed over Yeong-hye’s body and obsesses over an art project based on Yeong-hye’s naked body. This chapter is a little odd, Yeong-hye gets a chance to understand herself. She is free from the societal obligations of being a wife, and takes a chance of artistically expressing herself through her brother-in-law’s project. But her brother-in-law doesn’t have her interests in mind. He is acting selfishly for his own gains, ignoring everyone around him, Yeong-hye, his wife, and his son. Because of his selfish disregard to everyone, Yeong-hye suffers. Everyone assumes that Yeong-hye is the crazy one for going against so many societal rules.

The last novella is when Yeong-hye is committed to a mental institution. The world has given up on her, she is simply too weird for everyone. Her sister In-hye still visits often, but probably because she sees the same struggles that Yeong-hye deals with in herself. In-hye has been betrayed by her husband, forcing her to be a single mother in Korea, a huge social outcast. Everyone in the immediate family ignores Yeong-hye, and In-hye openly criticizes her family, which results in her being kicked out of the family.

The book made me draw a lot of parallels with the short story The Yellow Wallpaper. What caused Yeong-hye to go crazy? The strict roles created for women? Or was she starting to loose her mind when she started to avoid meat? The whole story is VERY GRAPHIC and might not be for everyone. There is a lot sexual and physical abuse, particularly in the first novella.