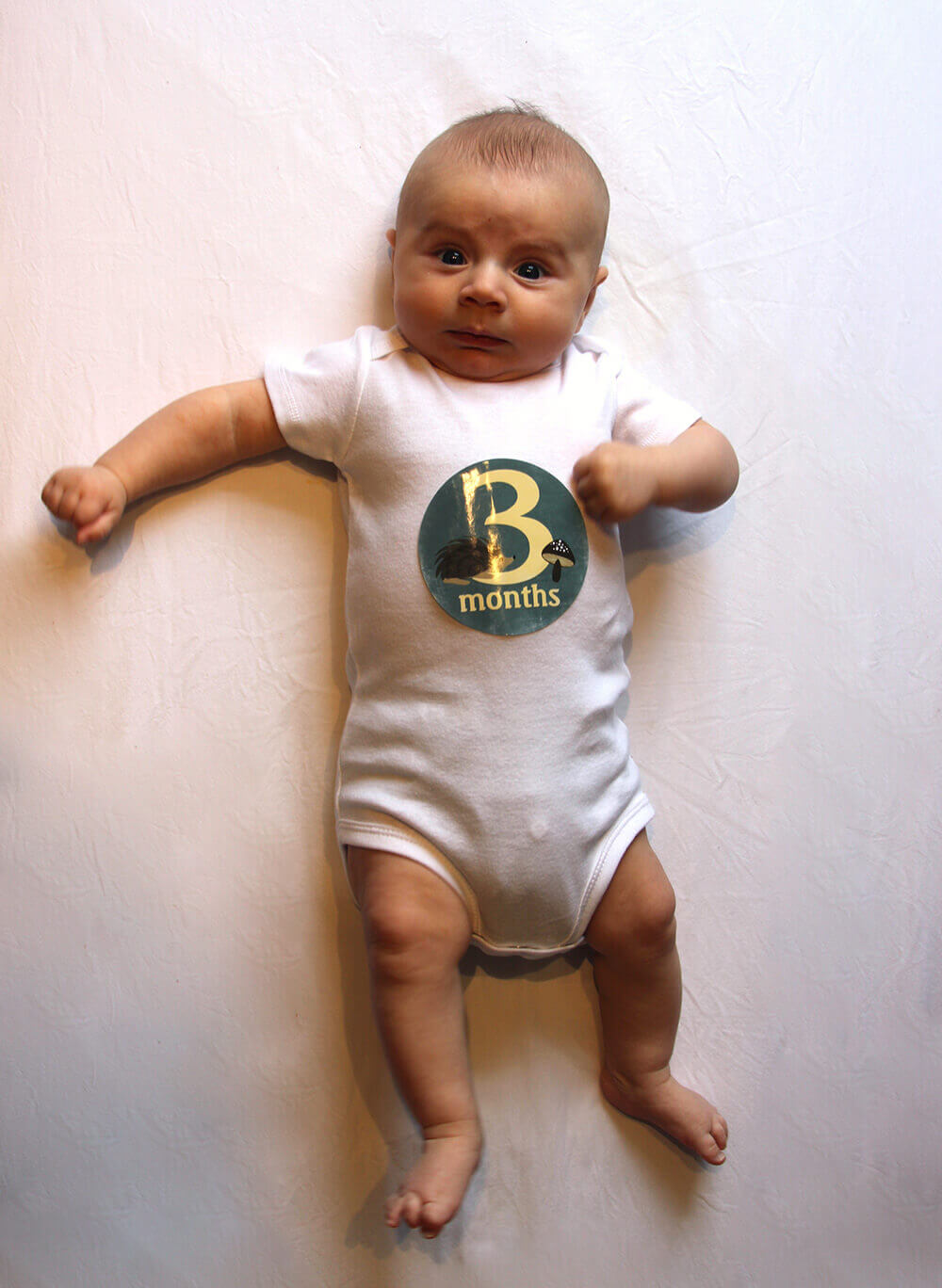 Man, what a month this has been. It feels like it flew by but I think it’s mostly because I wrote his “2 month” post pretty late, so it FEELS like the month was just between baby posts. I said it once and I’ll say it again, each day he becomes more and more human like and more and more massive.

Wolfie is now becoming an infant- not a newborn, but a full blown functioning baby. It’s pretty exciting! The crying is much less, he tries to talk, grabs things, and is drooling…a lot. The scary thing is how fast he is growing. I think I can say he is growing at a not-so-normal pace. He is now wearing 6-9 month clothing…. at 3 months! I could kind-of wrap my head around him wearing 3-6 month clothing at 2 months. I mean that isn’t too far away, right!? It was just a few weeks early! Today I grabbed a footsie jammie that was warmer but larger in size since it has been pretty cold. I figured it would be baggy on him, but it actually fit really nicely. At this rate he will be a full grown adult by the end of the year. 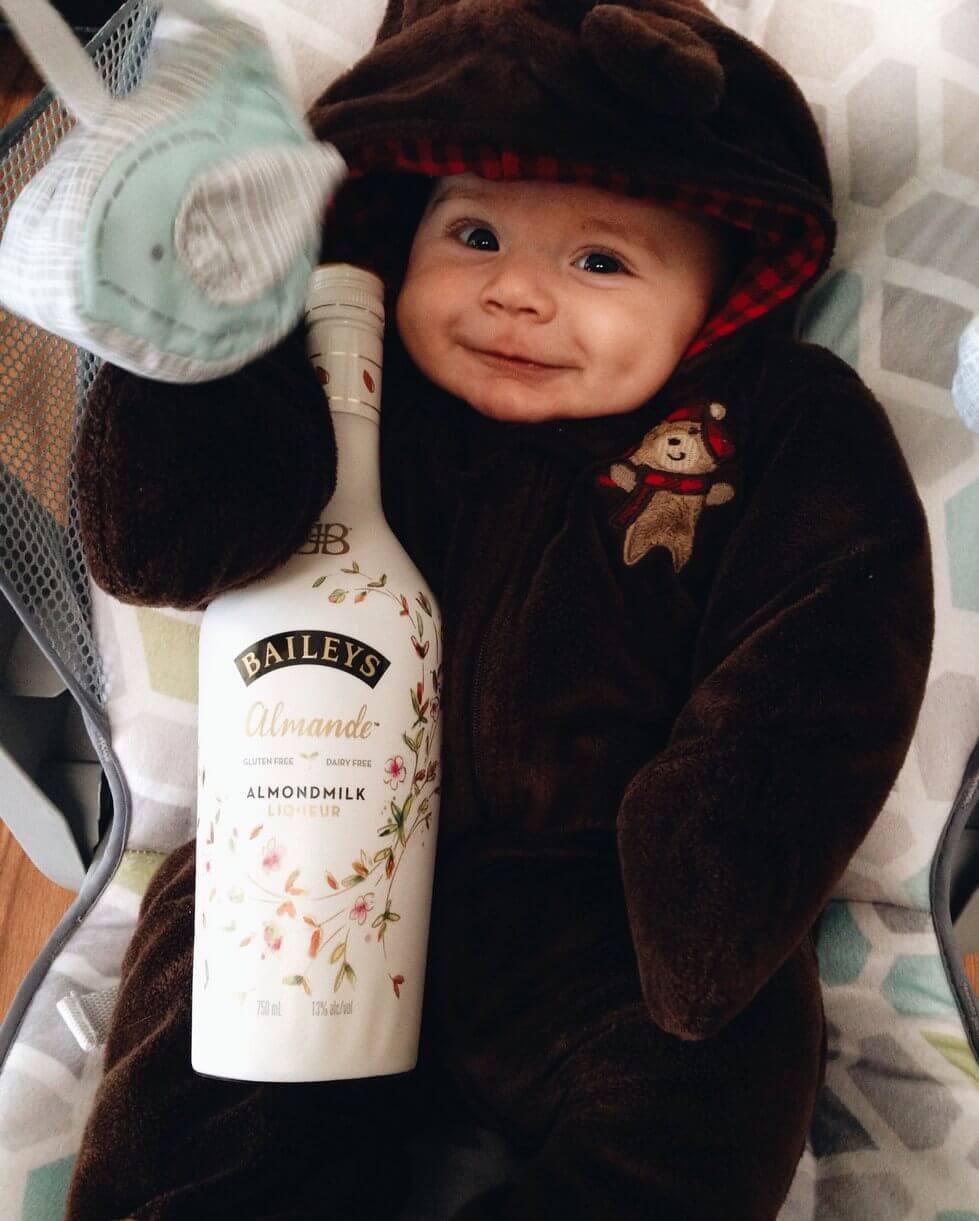 It is too early to be happy about booze.

All of his rapid growing has actually taken a toll on me. I guess little Wolfie is growing so fast that he has been waking up after only 4 hours of sleep for midnight feedings. This led to me being sleep-deprived, and a sleep-deprived me leads to crying me. At one point I went out for grocery shopping, and it was just a bad day. I was expecting a day off from watching Wolfie, but my Mom cancelled. I didn’t get any continuous sleep like I normally get. And it was incredibly windy so that Wolfie was constantly crying inbetween the car and the stores. It became clear that he wasn’t going to stop freaking out, and I started to get upset that I couldn’t even go grocery shopping. I had lots of produce and bagels, and couldn’t put them back so I went to pay for them. The cashier asked how I was doing, and I just lost it. I started crying, and the poor guy had to deal with a crying baby and a crying Mom. I feel as though I must not be the only Mom to have a meltdown, which helped me to feel better again. I figured I would try and make the trip again for the rest of the groceries, and it was MUCH more succesful. 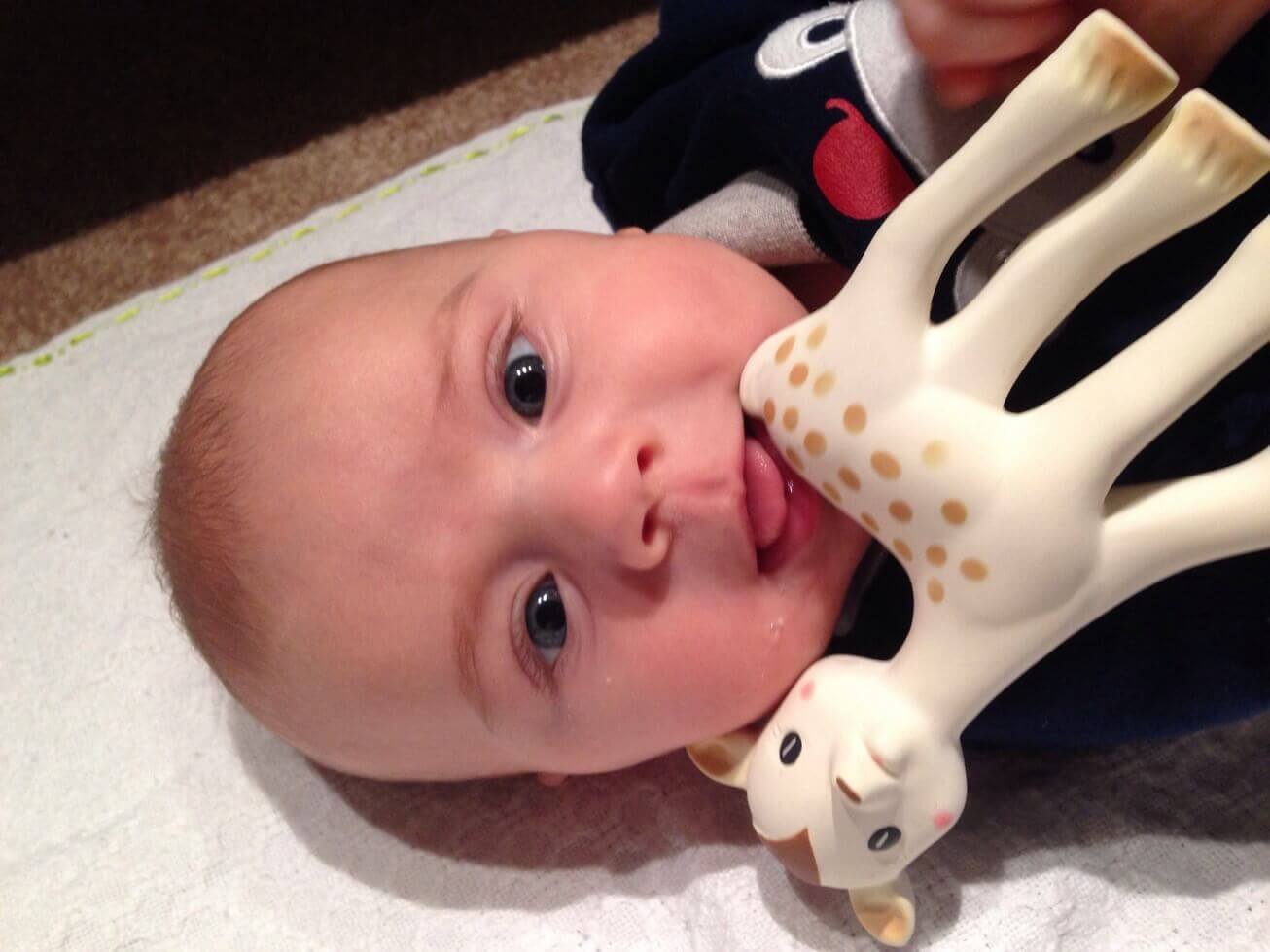 Wolfie has discovered the joys of shoving things into his mouth. Too bad he isn’t very good at holding things and putting them into it.

I have to say though, Wolfie is a champion sleeper at night, just a crummy napper (10 hours and 20 minutes of solid sleep!). In fact the napping gets worse everyday. I rock him for 30 minutes, and he only sleeps 30 minutes. And it is just getting to the point of him getting too big to hold for long periods of time. Worse yet, he is such a light sleeper that transferring him from my arms to the bed usually wakes him up. So I have been trying to get him to cry it out to help him learn how to fall asleep on his own. 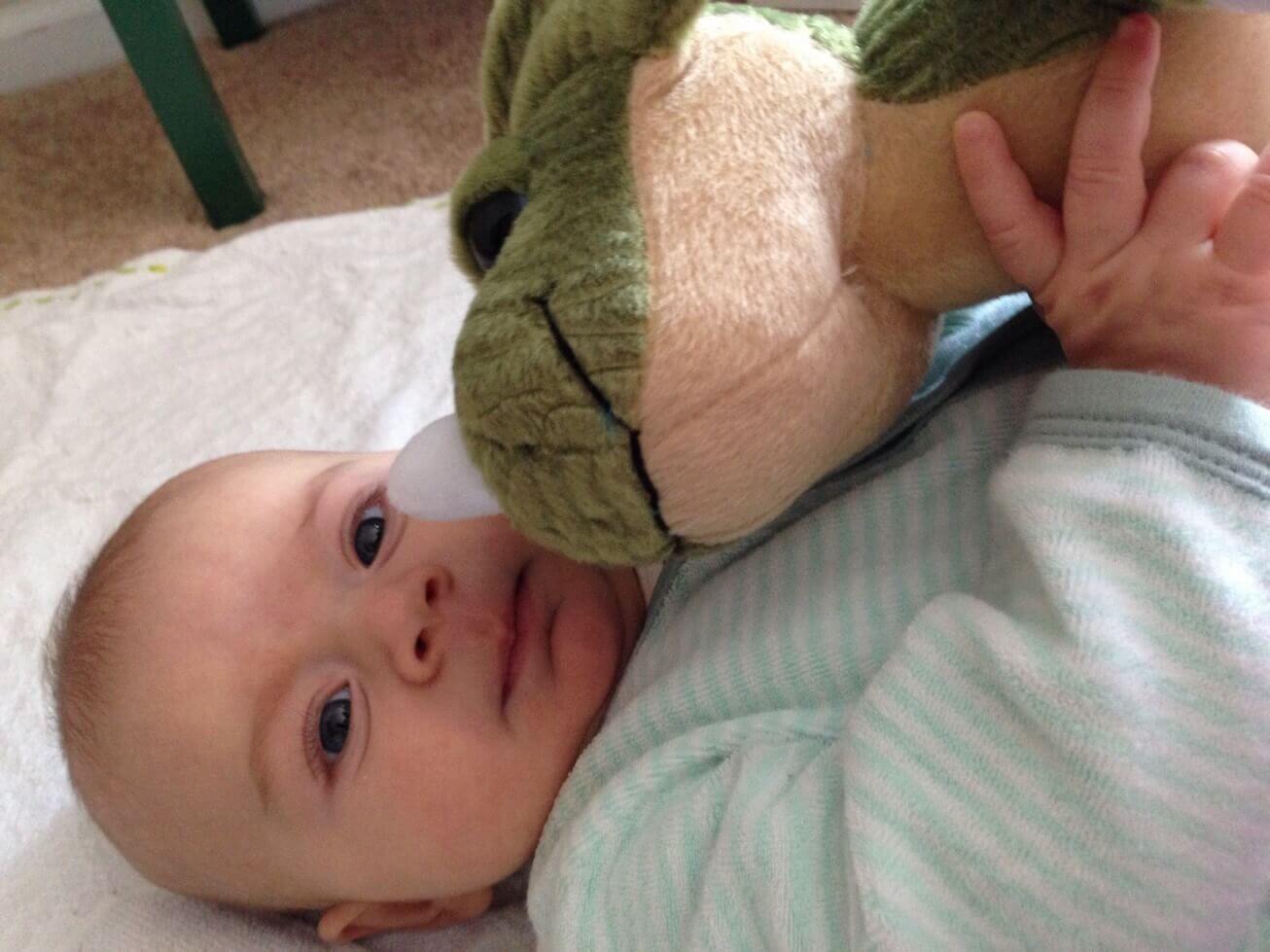 Wolfie is getting really good at holding things. He also likes to munch on the dino horn.

I know most doctors say it doesn’t hurt the baby. Many people compare it to driving around in a car. You don’t stop the car, and hold your baby till he stops crying. You keep going until you get what you need done. But there is something awful of just sitting around waiting for him to stop crying. In fact this is the first time I waited long enough for him to fall asleep. It felt awful. I hope his crying lessens and lessens ’till I can just put him down. He would be such a happy baby if he just naps for an hour twice a day. YOU HEAR THAT WOLFIE?! THAT’S ALL YOU NEED TO DO!

Overall I am feeling much better. Maybe it is medication, maybe it is the therapy, or just getting more sleep. I am getting all those squishy baby feels, and I am not getting all excited about seeing other people’s babies (who am I?) The other day I caught myself just walking around with Wolfie for an hour and enjoying it. I think it helps that I am getting out more. 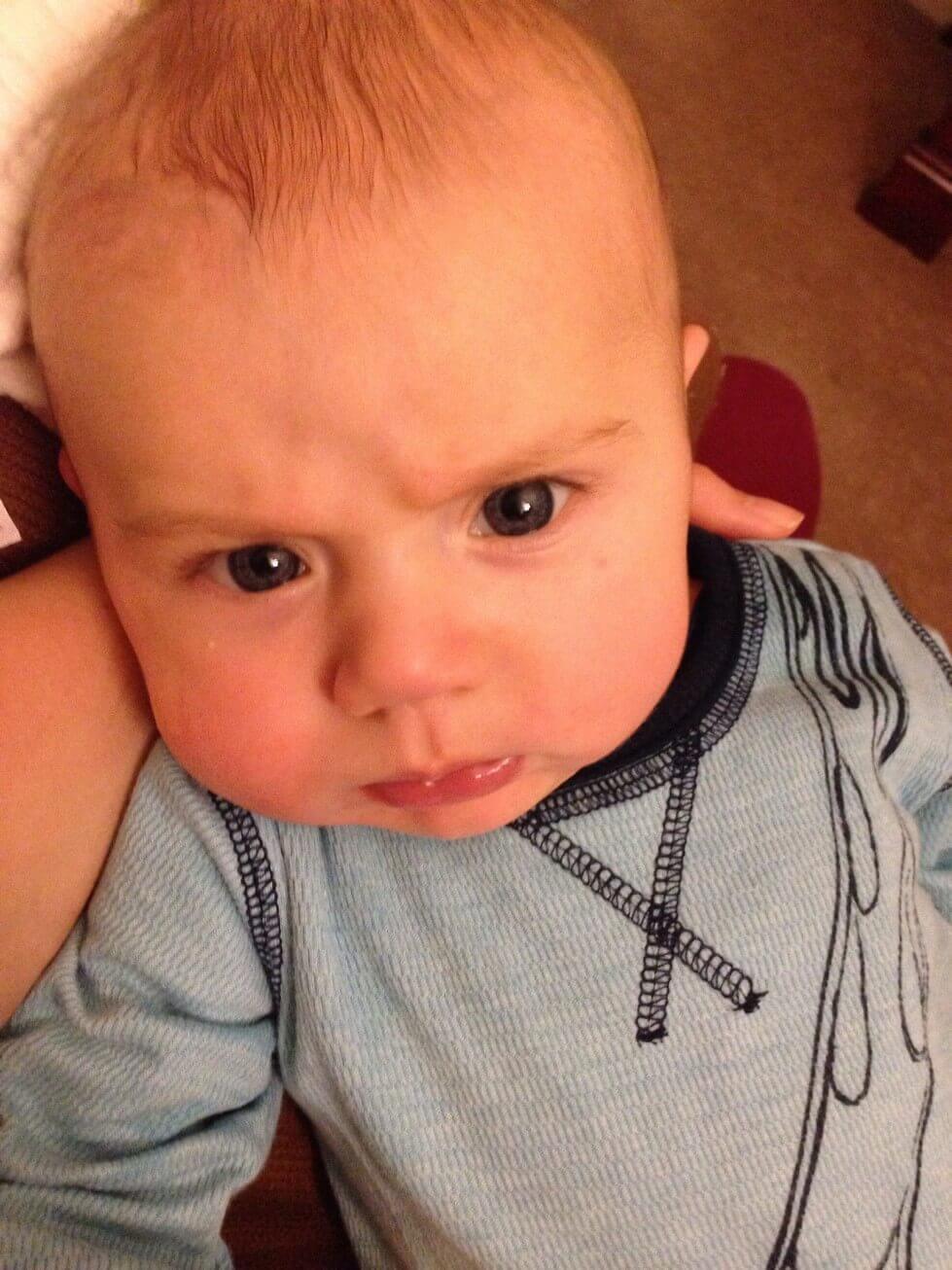 This photo was taken the day after Alexa visited. This lil man is pissed that she’s gone.

Oh and Wolfie (finally) got to meet his Aunt Alexa! I think he was thrown off by her pink hair XD. The visit was great for me, since it has been forever that I’ve hung out with people my age, well, I’ve been hanging with my friend Justine a few times. We tried out a restaurant that will hopefully get posted. Also Alexa will be proofing my posts since I am too tired to notice run-on sentences and misspelled words.

*Editor’s Note (aka Alexa’s note): Guys I am SO IN LOVE with Jen’s lil’ Wolfie. He’s so lucky to have such a great mama and dad on his life and I hope I get to squish his baby face again soon!!!*