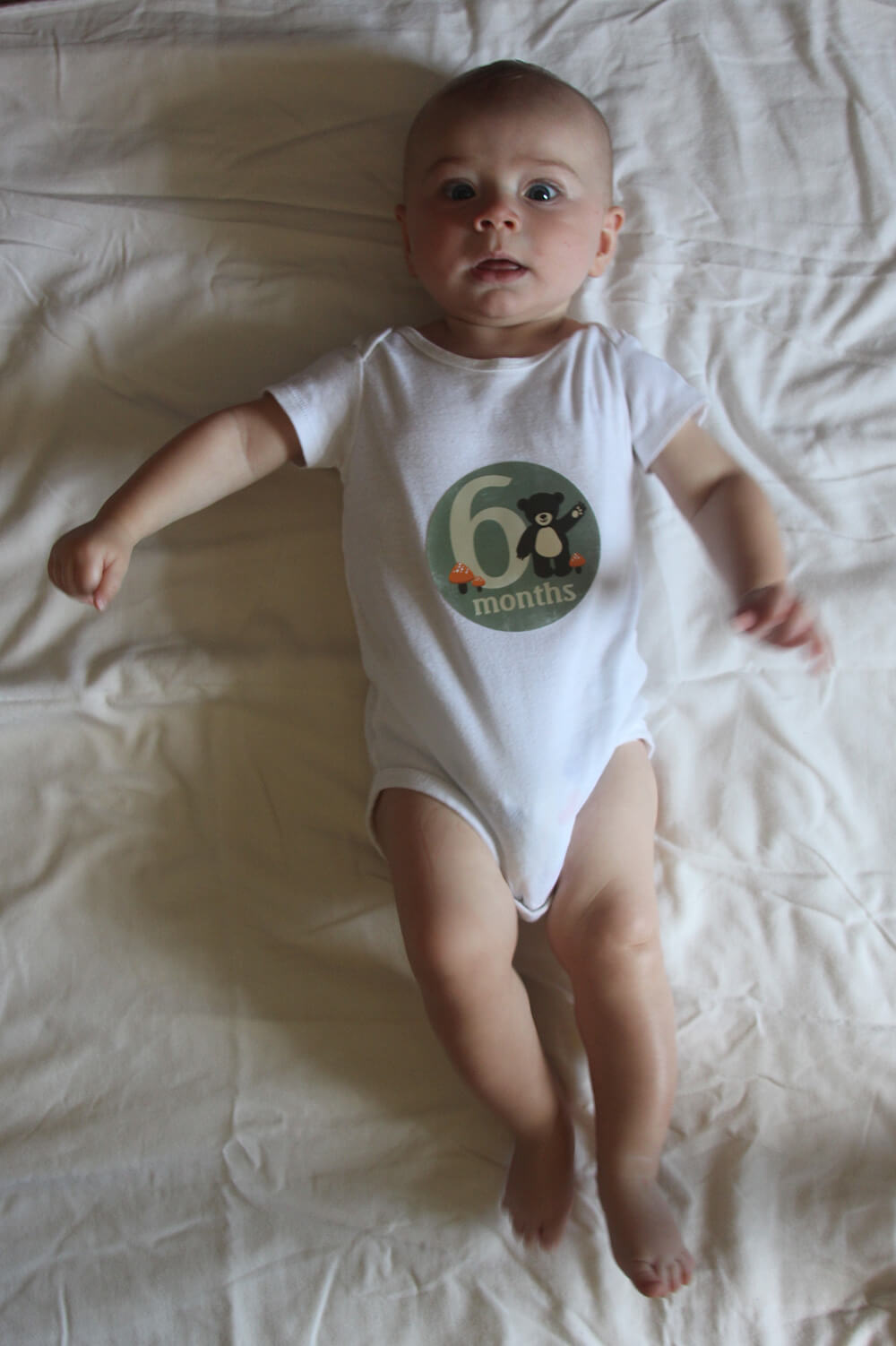 I swear everything is moving super fast. Wolfie is on the edge of moving around. He is starting to roll around more- but mostly when I walk out of the room or when he is alone in the crib. My guess is that he knows I’ll hand him some of his toys? But then again he isn’t very good at rolling off his tummy, so there were a few times he woke up in the middle of the night and I had to roll him on his back again.

Wolfie can now sit up by himself (once you prop him up). He loves sitting up while playing. I no longer need to be right behind him – though sometimes he wobbles too much and falls down. Thank goodness for the sitting because he now wants to stand up less. Yey! Less work for me.

The other day we went to a friend’s 30th Birthday Party and there were lots of babies. I was a little surprised how much Wolfie just wanted to hang around the other babies. He was clearly taking notes because the two older babies were crawling. At the party he kept trying to get on all fours but wasn’t sure how to move. In fact he still was trying it at home, and actually keeping his tummy off the floor. So who know, maybe crawling will happen in the near future? 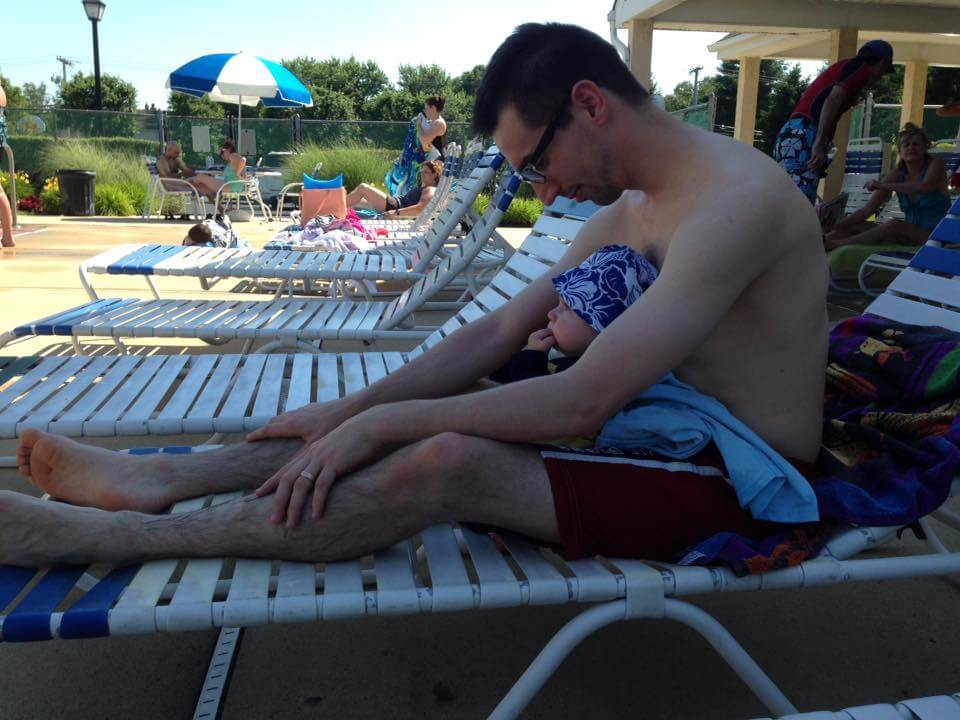 Sleeping is getting better. He still cries when we put him down for the night but it is immediately stops when I leave the room. Maybe I’ll start reading a book before leaving for the night to try and soften the transition. Sadly, we had to do sleep training for naps. I put it off and put it off and kept Wolfie in his small rocker instead of the crib for naps. Then a heatwave hit right as I was trying transition. I didn’t want to use the rocker since it wouldn’t help in the heat. He also wasn’t falling asleep in my arms because he was too hot, not that it mattered because he almost always woke up when I placed him in the crib. It was sooooo terrible. But once the heatwave went away, he fell asleep in the crib by himself. Now he has similar reactions as going to bed- crying when I am in the room, but starts putting himself to sleep when I leave.

And now the sleeping is a LOT more consistent. It has been a sigh of relief for us, since we know he will STAY asleep at night. I remember for the first 2-3 months having to swap baby duty so I could try and get enough sleep. Now if I am getting up in the middle of the night it is at 4 in the morning. And I am not pretty much always getting 7 to 8 hours of sleep. 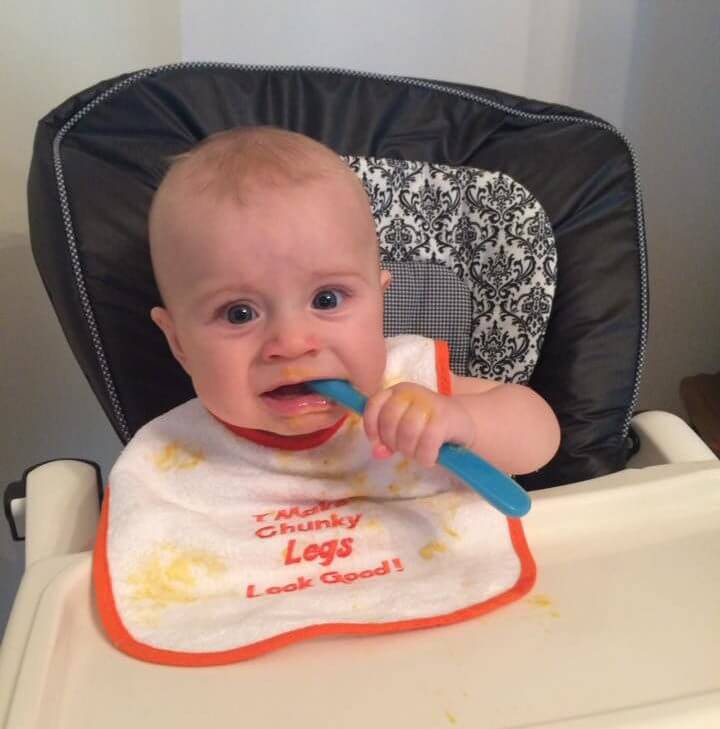 Loving solids! I was a little worried about starting him on solids since the recommendations are now to wait until they a six months old, but I figured why not. If it seemed to be a bad idea I would take a step back and wait. So far no digestion issues and he seems eager to eat the purees. I made some awhile ago from produce from last years CSA crops- butternut squash, turnips, and parsnips. All are getting the baby seal of approval.

Then I flip flopped and read Baby Led Weaning. So I ditched the purees and went for “adult” foods. It has been interesting since 95% of the food rarely gets into his mouth. So maybe there will be a what we ate coming up soon.