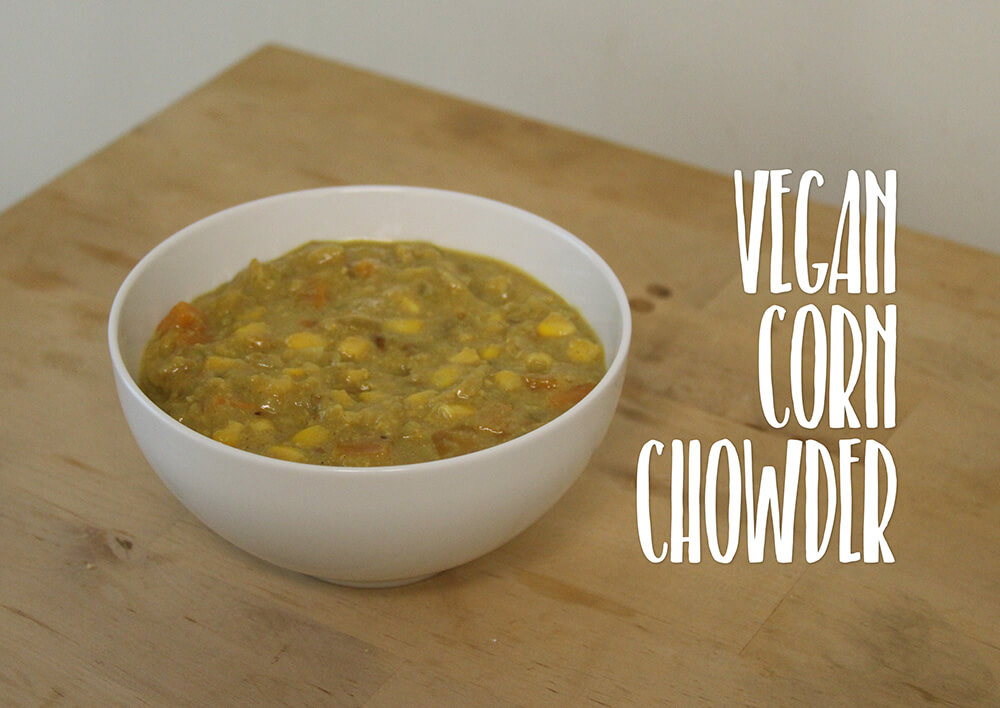 I remember reading some blogger saying that every vegan cookbook has some sort of corn chowder. Clearly I didn’t get the memo. I think I’ve only made this corn chowder in my whole adult life. The recipe is originally from Vegetarian Planet, a super old school book my mother gave me when I went vegan. My mother is not a vegetarian, but you can blame her for my open mind to veganism. I probably ate less meat, and I probably ate a wider variety of food than most children. This cookbook has always been on our shelf. I never thought it was weird until my husband shot me a weird glance when I mentioned cooking couscous for dinner. I mean every small American child eats couscous right? No? He also hadn’t heard of knishes before, which is one of the rare potato foods I actually like. But then again, I have a thing for food wrapped around a dough. 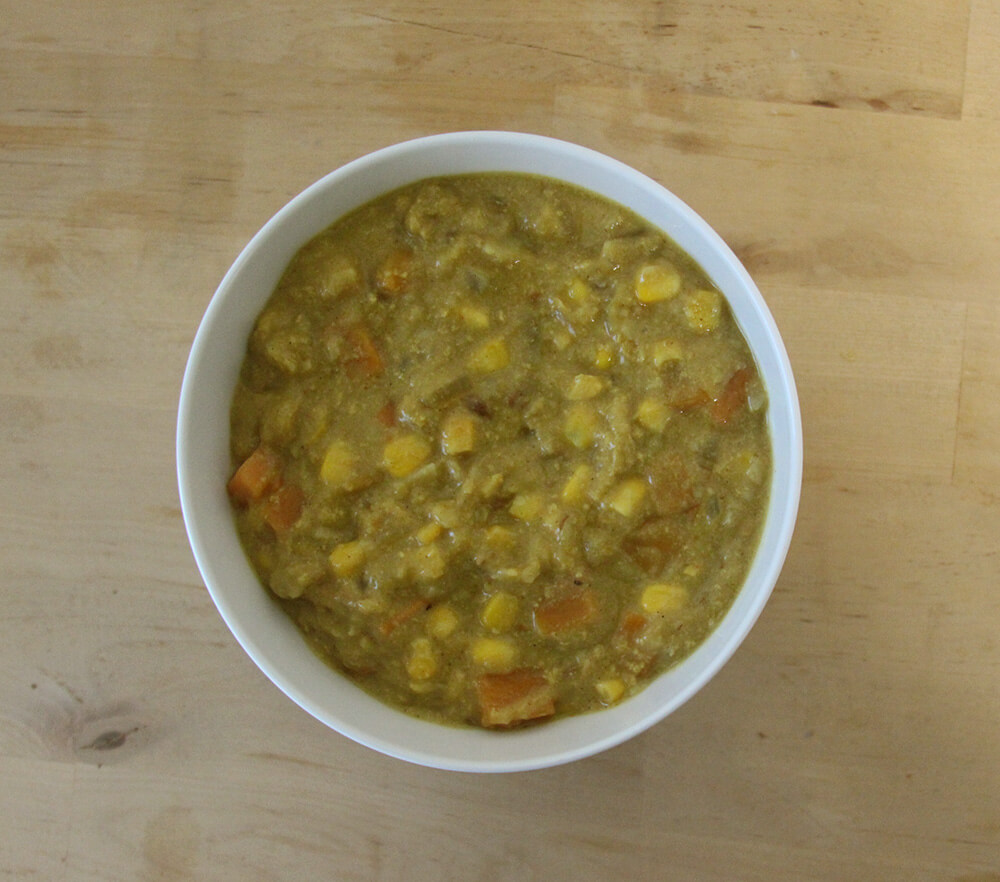 Anyways, what I love about Vegetarian Planet is that the recipes are written by a meat eater, but aren’t bland. Most omnivores who make a vegan recipe always taste like it needs a little something extra, or it is so low calorie it is almost pointless. But Didi Emmons just loves vegetables, and isn’t afraid of a little fat and calories. In fact this recipe calls originally for 6 cups milk with the option of replacing a cup of milk for heavy cream. No thanks, but I like your enthusiasm Didi.

I am also not against “fake” foods, but I do like when vegan cookbooks stay away from them. Why? Well, it just makes everything seem more approachable. I think when transitioning to a new diet, having a whole new world of wheat gluten, soy products, and fake cheese can either be fun, comforting, or intimidating. I feel like if a person who wants to go vegan could easily pick up this book and cook almost anything from it without many new products (you probably would need to remove cheese, or sub soy milk/fake butter.) 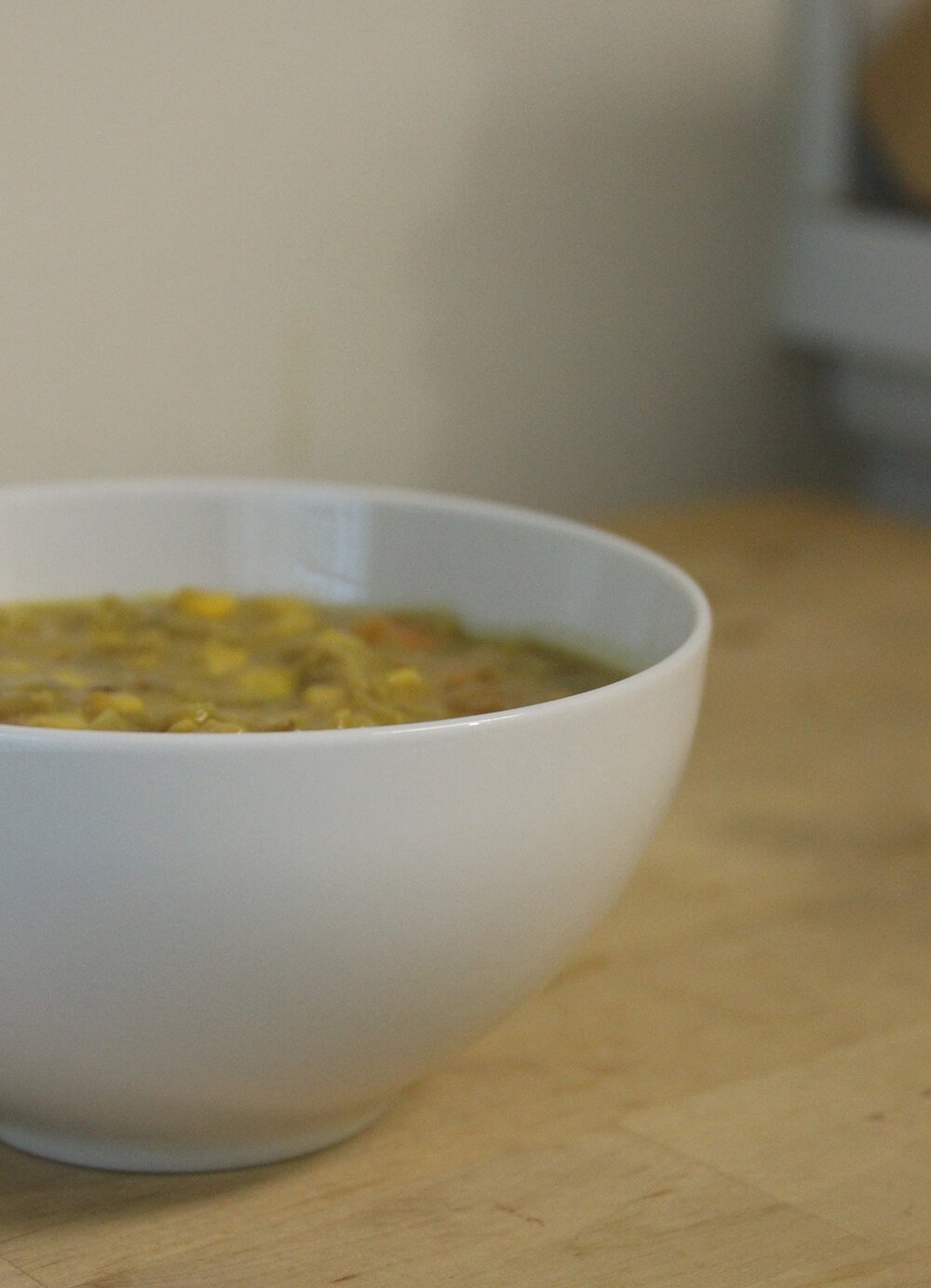 Todays prompt was all about cooking with colors we rarely make, and even though the past two posts have featured some intense yellow, I don’t actually cook with that color that often. This was my attempt to make something yellow. And color perfectionist me is just unhappy with how green and brown it is. Damn my background in color theory. But close enough right?

So how does my recipe differ from the book? Well, the original recipe uses 6 cups of milk, and I couldn’t blow that much cash on a dinner! So I cut down to 4 cups soy milk and 2 cups vegetable broth. The recipe also is suppose to use fresh corn and their stalks. But I made it so you can make it in the winter, when you probably want to eat a rich cup of hot chowder anyways. So it uses frozen corn.

There are also nice chunks of sweet potatoes in there. I wanted to use a white sweet potato, but I grabbed an orange one instead. Oops. That’s the problem with my CSA, I tend to mix up my white and orange sweet potatoes up by the time I get home and they all just get mixed together. It isn’t that big of a deal except for the different cooktimes. 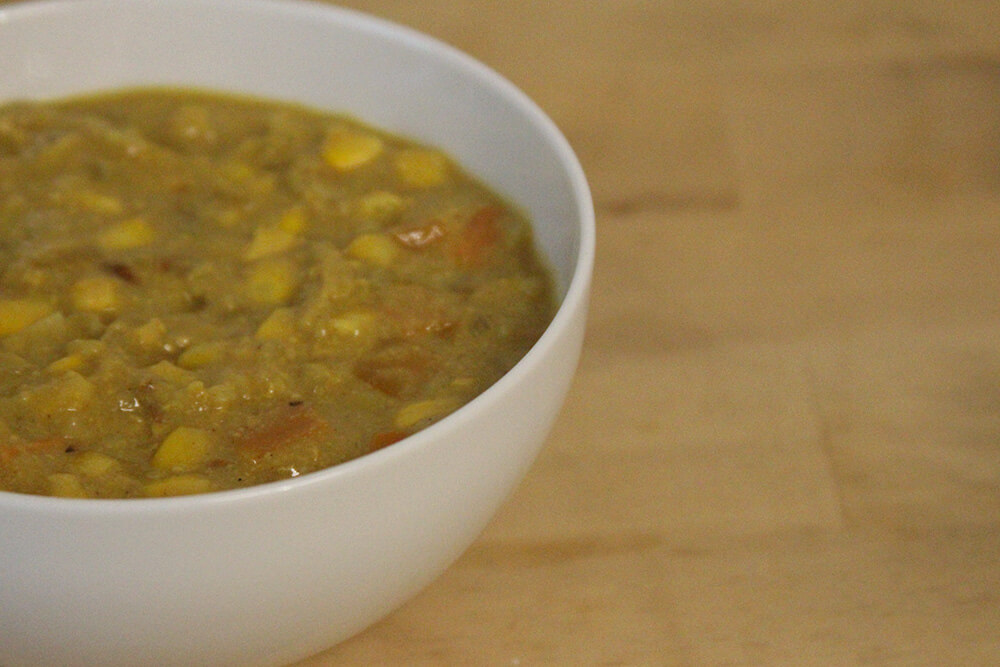 Anyone else use a non-vegan cookbook often?