Blog Recipe Round Up: Slow Cooker

I asked for a slow cooker for Christmas, thinking mostly about making bulk staples- cooked beans from dried, vegetable stock, tomato sauce, etc. But I knew I would eventually try some other recipes, that would be served up as dinner. So here are my findings- with mostly good results. 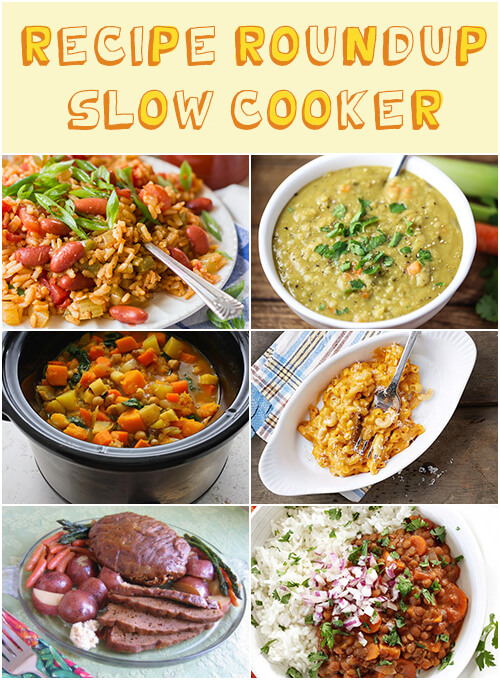 Sadly I think the point of a slow cooker is slightly missed here. The recipe calls for you to add more ingredients midway through the slow cooker. I get it. It tastes better and prevents overcooking this way. But realistically you can’t just come home from work and add more food. You could still make it if you plan on waiting even longer once you get home for the added ingredients (and if your slow cooker has a timer)

But aside from that, the flavors are all there. And since I am a stay at home mom, it all worked out. It does call for a specific flavored vegan sausage, but that is my only complaint. I am sure you could google a recipe on how to make one if you can’t find it near you.

So many mixed feelings about this soup. For starters- I love how cheap it is to make. Carrots, celery, onions, and split peas. I could crunch the numbers but I am fairly certain the whole soup costs less than $5. It is also REALLY easy to make. Chop- toss- and let it cook. I love how the texture is very smooth but not puree smooth.

The flavor was pretty good, but not mind blowing. I always bring this up since I feel like traditionally non-vegan foods that are close to being vegan need to be a solid 100. Otherwise people swear by that little “je ne sais quoi” that meat brings to the table, in this case a little bit of ham. So I wish she included a little bit of paprika or liquid smoke, etc. I can easily do that, but non-vegan readers might not think of that.

This recipe, although it isn’t in the title is suppose to be inspired by a Moroccan tagine (or tajine). If you never had one before it is just a spiced stew cooked in a clay pot, commonly cooked in Northern Africa and the Middle East. I’ve made a few tagine recipes, but not in the traditional cookware.

The first thing I noticed was that there wasn’t that many spices. Seemed a little suspicious so I doubled the spices (for some.) Truthfully I wish they included a wider variety of spices becuase they didn’t jump out that much. I also skipped the raisins and the chickpeas. The chickpeas because of a weird scheduling issue, and the raisins because I thought it would be too sweet. I’m glad I did that because all the root veggies were super sweet!

This was a fast-yet-slow slow cooker recipe. So much time was spent peeling and chopping, but the slow cooker gets put on high so it only takes about 4 hours overall. Making it not so great if you want something to cook while you are at work (unless you work from home) Overall this isn’t a bad dish, though it felt like it was missing something. It does make a HUGE amount.

I wanted to try and pick recipes that weren’t just soups and stews for this review. I’ve modified quite a few recipe to use a slow cooker to ensure that I don’t burn things on the stovetop or know that I can go for my “late” walks (you know… at 4-5pm) and still have a dinner on the table.

What I got was a SMELLY house… or maybe not. I mean my house smelled terrible, but it could of been because of our trash, but likely a combination. Honestly- it smelled like vomit. I have no idea why. It crept up all morning, but all that was in the slow cooker was water, canned tomatoes (didn’t use fresh like the recipe), butternut squash, and herbs. WHAT?! I also found that the pasta was easy to over cook. If you are wondering how you make this recipe- you cook the squash for several hours, blend, add the rest for about 15-20 minutes for the pasta to cook. Also there just wasn’t enough bang in the sauce. I eventually add some miso to add a little kick.

But that all being said, the overall concept wasn’t bad. I think in the future I would tweak the recipe around, and pay more attention to the pasta while it cooks up. I probably would snag a mac and cheese recipe I like and modify it for the slow cooker to include all the flavors I like. And Wolfie LOVED the dish. So it wasn’t a total bust.

I remember awhile ago learning that you can make seitan in a slow cooker. One day I remembered that and searched for a recipe. This was the first one, and I think I should of looked harder. The name of the author sounded familiar so I figured, gotta be good right?

Overall the recipe worked. The veggies cooked up and were yummy. The seitan cooked and was tasty, buuuut wasn’t the best seitan I ever had. It was pretty plain and I could think of a million other recipes that were tastier. The seitan works perfectly fine for OTHER recipes, but not something that I would want as a Thanksgiving dinner.

I love seeing price breakdowns of food. I hear things like “serves two people for $10!” and I THINK that’s a lot, but I really don’t know. I just know how much a spend each week for my husband and I (and now little munchkin.) But by having the prices next to the food I can think “am I over paying for lentils?” and “thank god for Trader Joe’s coconut milk!” So I think I overall spent LESS than her numbers, but I haven’t personally crunched the numbers for spices and veggies (how can I? they were from my CSA)

So let’s go with how the food turned out. Overall the recipe is pretty straight forward. Toss everything into a crockpot. Cook. Add coconut milk. Okay. Simple enough. The end result? Pretty tasty, though I am not 100% amazed. I would certainly recommend this recipe. Super easy, great for working families. TONS of food. It wasn’t mind blowing though. BUT I like how simple it was, and it is great way to introduce vegan food to newbies. Simple, cheap, nothing crazy, and full of flavor.