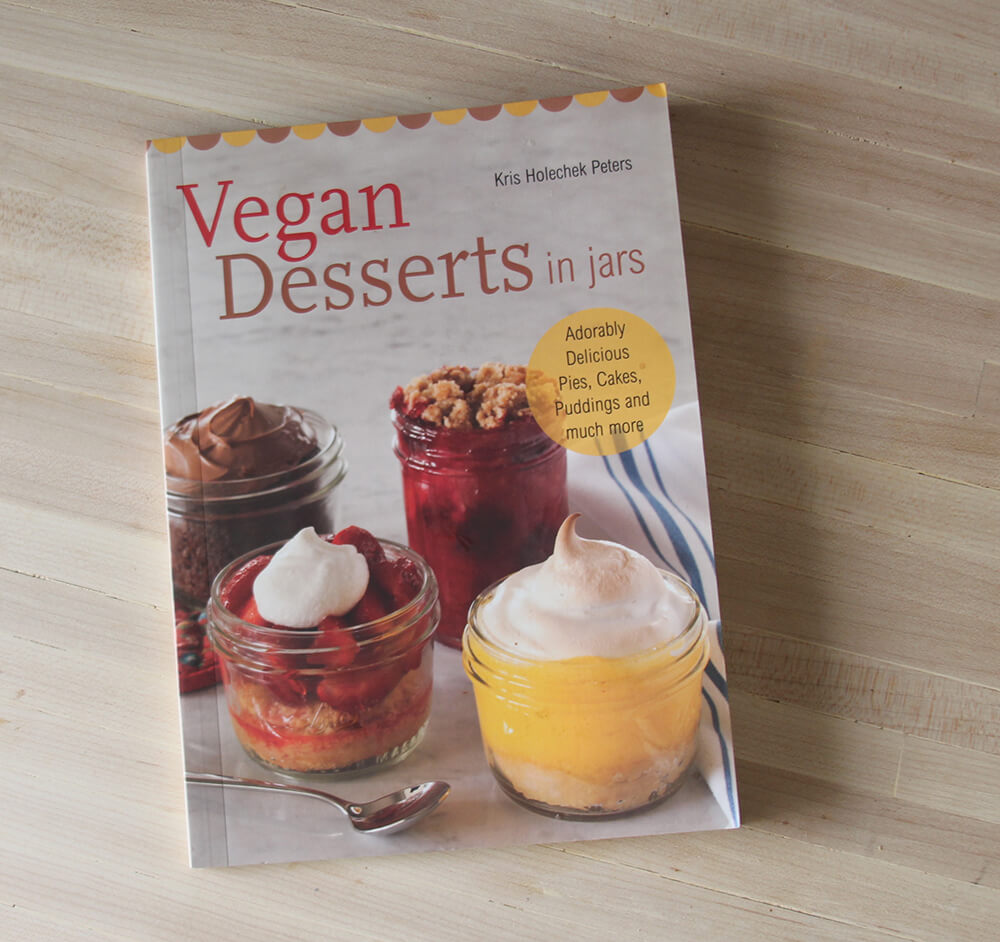 This is another cookbook my Mother-in-Law found and thought of me. She was browsing a local second-had bookstore, Second Time Books, and found this little jem. I was pretty skeptical. Mason jars are made for jarring and holding things, not for drinking and eating. A fad that I am totally against. I smiled, took the book and flipped through it. I figured I would give it a fair shot.

After reading Jenny Marie’s cook-a-long monthly challenge, I thought it would be fun to share some posts reviewing the book as well. If you have a blog with a review (specifically of the recipes), leave a comment and I will add you to the list.

My first guess was that Kris took the photos herself (she did!) I could tell they weren’t professionally done, but they are still very good. It certainly not like when your boss at the restaurant you work at says “Can you believe they wanted $200 to take photos of food! I mean look at my photo? Isn’t it just the same?” You nod yes, but your bosses crummy photo pretty much explains why a professional photography wants $200. This has happened to me TWICE, just pay a damn photographer! NOW if KRIS was my boss and showed me her photos, I would of been impressed. She uses lots of natural light, and does a great job making the food look enticing.

But she does not have a photo for each recipe. I think that is overall fine. I think there is enough to leave out some of the doubt and guesswork, like what the heck will a babka in a jar look like? Or how will a whole loaf look in a mason jar?!

Like most modern cookbooks, this has and introduction then chapters full of recipes. I have to say I STRONGLY recommend reading the introduction! She gives some important information about mason jar safety, that you might want to read to make sure you don’t have any exploding jars in the oven. She is short and sweet, so you can move on to the recipes.

She divides the recipes in 9 chapters- No-Bake Treats, Cakelettes, Pie and Friends, Pastry, Odds and Ends, Treats for Two, Mixes, Jam on It!, Toppings and Fillings. I like how she starts with no-bake so if you are excited you can jump right in. I also like how she does include some jam recipes, I mean that’s what mason jars are for, right?

Kris does a great job getting to the point but talking about what is important in the beginning. And I quickly went from “why can’t we move on past the mason jar trend!?” to “oh, she makes a really good point!” I am not 100% sold, but I think it does create some great points. You get self portioned desserts, you can easily bring an apple pie for lunch at the office. Okay, I’m getting this. So what I am trying to say is that Kris is really good at getting you excited about making food.

She should be good at it, she has written quite a few books, mostly about baking and has a now dead blog called Nom Nom Nom Blog. I know for a fact that I’ve stumbled onto this blog a few times in the past.

There have been both hits and misses with these recipes. I think I found that the delicate oil based cakes we are used to in the United States just don’t work with the glass baking dish. I had zero luck with the hot water bath baking. BUT I loved the premade portions for the desserts. I think my husband was in heaven taking a small little apple pie into work. And the heavier cakes worked beautifully.

There are a lot of recipes I am interested in trying. Mostly the baked fruit pies for my husband. I am usually making a WHOLE pie for him. Sure I’ll eat a slice, but I am happy eating only one or two slice and letting my husband polish it off. Having small jars makes it easier for him to enjoy and the oven is on for less time.

The book is pretty short, which is kind-of a bummer, but in some ways great. I think overall this book helped me get excited about a new baking tool. It has very much inspired me to try converting some recipes into a jar. I am sure my husband will enjoy the more elaborate desserts that he can bring into work.

Below are my individual recipe reviews. I tried to leave links to any publisher approved online recipes, which was only two. I also try to pick a recipe from each section, but skipped Treats for Two, Mixes, Jam on It!, Toppings and Fillings. The mixes I felt didn’t fit my definition of a baked good mix (too many non-shelf-staple mix in required). I made a few topping and fillings, but they are mixed in the reviews (two cakes, and a grasshopper pie). Finally summer creeped in and turning the oven on seemed irresponsible for making anything from the Treats for Two section, and I wouldn’t be making anything from the jarring section. You probably didn’t care, but there you go. My logic for the whole thing! 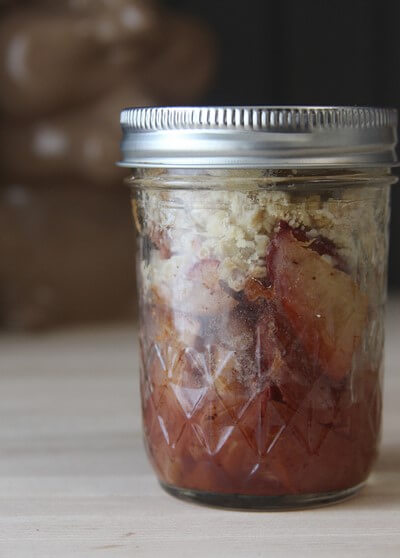 Apple Crisps Cups
Section: Pie and Friends
This I made twice, and will probably will make again or slightly alter in the future. The first time making this I had the issue of the apples not cooking all the way. But I made it a second time, making sure I baked for an extra ten minutes. Once I did that, it worked out perfectly! Since this is such a simple recipe, and my husband loves apple pies, I will probably keep on making this recipe.

Another little change I made was that I cut my slices in half. This makes it much easier to squish down the apples into the cups. Another cool thing about the recipe- when you go to take the cups out of the oven, you can actually see the apple mixture bubble up. It is really cool.

Baked Pineapple Pudding
Section: Odds and Ends
FLOP! I don’t know what went wrong, I followed the instructions and all I got was pineapple mixed in yogurt that had a lot more steps in it. To make things worse it was chalky from the corn starch mixed in, and it was too sweet to feed Wolfie because of the added sugar. I have a feeling I would of gotten better results if I cooked it on the stovetop to thicken it into a pudding.

Coffee Cakes
Section: Pastry
We have a winner! We loved these cakes. Kind-of funny that these are in the “pastry” section, not “cakes” section, but I guess she is reserving the cakes section for ones with frostings. For anyone who might be wondering, these are American coffee cakes, meaning they have no coffee, just are cakes intended to be eaten with coffee.

She gives two options, 8 cakes in 4 oz jars, or 4 cakes in half pint jars. The picture had the crumble topping overflowing, and I wanted to make sure that the lid would screw on so I went for 6 cakes in half pint jars. It took longer than the recipe called for time wise, and I had a LOT of topping. I think it is enough for 8 cakes, and probably could be cut down for smaller amounts. I’d make these again. 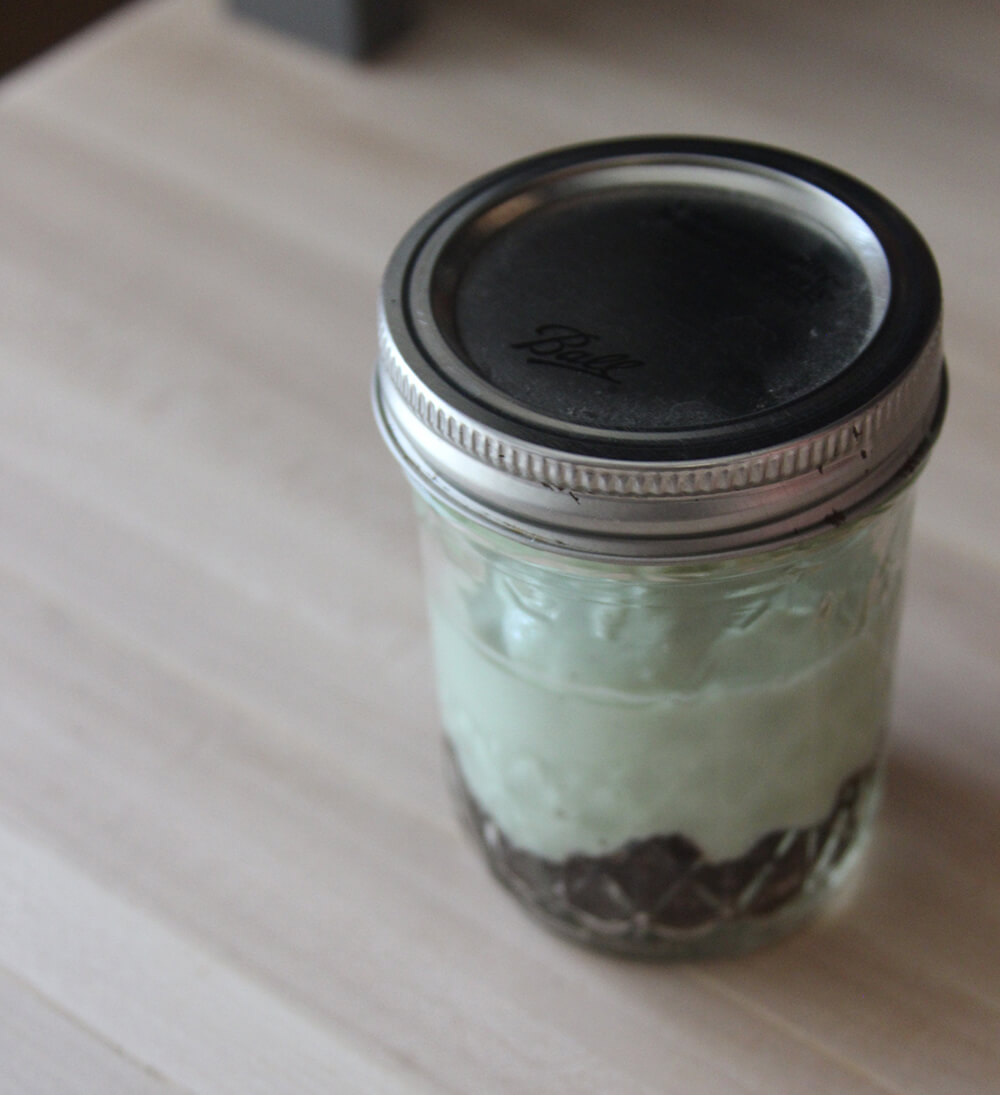 Grasshopper Pies
Section: No-Bake Treats
This is a treat I don’t think I will make again. The flavor was tasty but 1) I am the only one who will eat it, my husband hates peppermint and chocolate (As he puts it, “I wouldn’t eat chocolate while brushing my teeth!”) and 2) It is kind-of expensive! The silken tofu was $2 and cream cheese was $3.50 so it probably $1 per serving. Yikes! I don’t have anything against spending that much on myself, but I expect a lot of I am spending a little more than normal.

But otherwise it was tasty and super easy to make. Sadly I don’t have the 4oz jars, so I used whatever I had, which resulted in uneven amounts of distributed fillings. Oh well. XD It was very fast and easy, just blend the oreos, divide, blend the rest, divide. The only difference is that I used a tablespoon of creme de menthe instead of peppermint extract. I would reduce it to 1-2 tsp in the future.

Over the Rainbow Cupcakes
Section: Cakelettes
Recipe: Bakepedia
If you click on the recipe link you will get a bright a vibrant photo of a little mini rainbow cake. I tried making this recipe and it was a little bit of a bust. The cake itself wasn’t bad, but I definitely didn’t get those pretty little layers. I also feel like the recipe didn’t bake properly or evenly. I got cakes with tall domed tops, and I think the cake shrunk once it cooled. The flavor was so-so, it is just a vanilla cake, and vanilla frosting. Both are not my favorite. I wish there was more instructions and tips on how to get the layers to work, as mine just sank to the bottom.

Peanut Butter Cream Cups
Section: No-Bake Treats
Don’t you hate it when you read a recipe and think “this isn’t going to work” but you do it anyways, and surprise! It doesn’t work. Well, the bottom of these cups screamed DON’T DO IT! But I did it, and it didn’t work. I got a grainy chocolate bottom, and so did Elycia. Next time I am going to try and boil the milk, then toss in the oil and chocolate chips and have the melt on in there.

But aside from that it was super easy to make. It ends up being $2 for the silken tofu (like the grasshopper pie) but that is the biggest expense. I think I might add more PB into the mix, and I wish there was a LIIITLE bit more chocolate. Maybe I’ll make a modification for my own version. Hmm… still super yummy.

S’Mores in a Jar
Section: Cakelette
Recipe: Good Taste with Tanji
I started to learn a little by the time I made these cakes. I didn’t make the ganache the way the book calls for. I tried boiling all the ingredients other than the chocolate, then added the chocolate, letting them melt in the liquids. It worked perfectly.

The cake still seemed to not work properly. Maybe I am over greasing the jars? But the cakes seem to rise oddly. The book recommends eating the cake all warm and gooey, and I wasn’t a fan. I think I preferred eating it when properly cooled down, when the ganache was nice and thick.

The cake idea was cute, and worked out since I happened to have a bag of mini marshamllows, but I think the cake didn’t 100% work. Graham crackers wasn’t what came to my mind while eating it, though it was still really tasty. It is worth trying out!