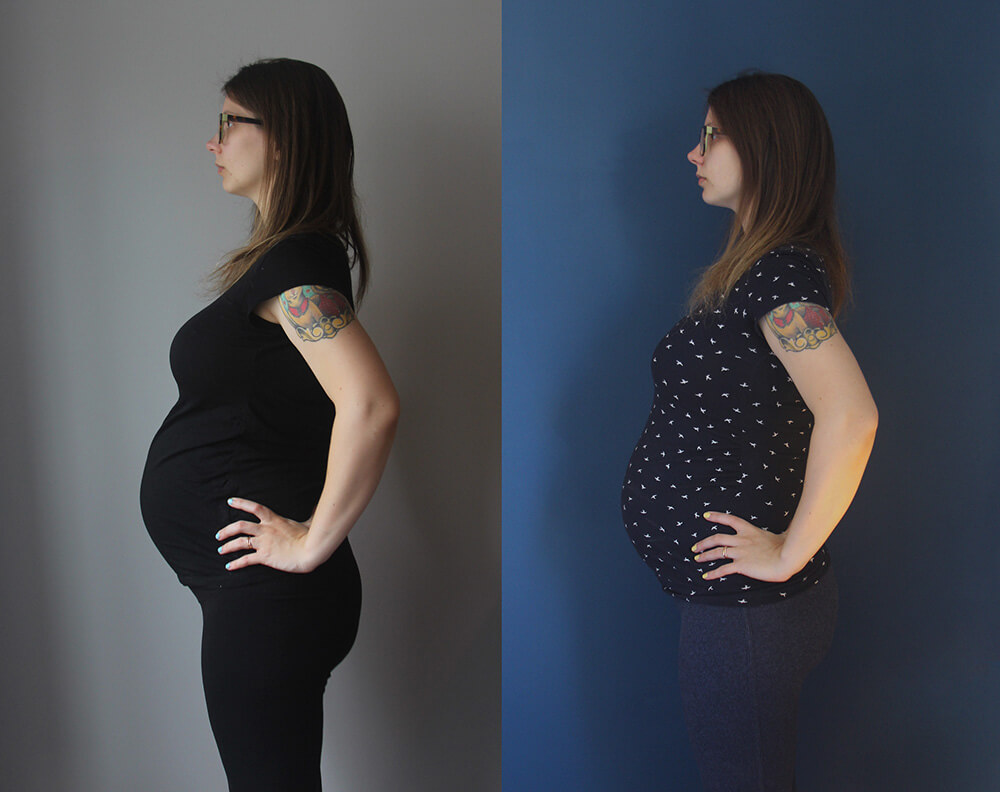 Exercise has slowed down quite a lot. I think in general I am more active than most people since I stand all day at work. But on weekends I try to get in some extra walking from doing errands and going to my CSA. Plus that is when I try and fit a longer workout in, whether it is lifting some weights, a barre workout, or a run. Well, sort of. I have to officially retire my running. I think I might be having Braxton Hicks contractions while running, and I read that isn’t the greatest. So it is official- running is done until probably the end of the year.

I am going to try and fit in a 30 minute walk everyday, since that seems to be what most doctors recommend anyways. Problem is that I kind-of hate my neighborhood for just walking, so I will try and figure out how to budget my time to drive into parks or towns that I find more relaxing. *crosses fingers* Hopefully that works out.

Doing well. Occasionally my back hurts at the end of the day, and I’m a little slow at sitting up when watching TV. But otherwise I can’t complain. I ended up getting my flu shot last Monday, and that was the first time doing that since… goodness… I don’t know. High school or earlier? Yes, I know I am a bad adult, especially since I have insurance to cover it. I need to go back again and get my Whooping Cough shot as well.

The other day I did get a migraine. It sucked away an entire day. Which stinks because I thought- sure, I will get some random stuff for the baby done if I’ll be home all day. Nope. At one point I fell asleep for 2 hours, thinking I would be fine without my complicated pillow set up. Nope. Hips really hurt afterwards. It is the weirdest thing to me about any pregnancy symptom.

There are two very aquatic animals this week- the platypus and small-clawed otter. They are kind-of weird choices, mostly because I don’t think I’ve ever seen a platypus. Like never at a zoo when I was little. It is one of those animals that most people know of, but I guess most people never see. So I have no clue how big they actually are. I mean, how common are they in Australia? Like do most Australians see them swimming around in ponds and such?

As for the small-clawed otter? I’ve remember them from the Jungle World exhibit from the Bronx Zoo. Actually they seem to be in a lot of zoos, so they either must be pretty happy in captivity, or just very abundant in Asia. If they are pretty common in Asia, I would love to spend a few trips just searching for them by the water, since zoos don’t benefit animals.

Oh wait! I have to do stuff!

Jon and I are hitting that “oh yeah, we should probably get some stuff done soon” sort of moment. I mean, we aren’t acting late in the game, just sort of slightly freaking out since it FEELS like we have been putting these things off forever… which I mean we kind-of have. We need to do all that boring stuff like get shots (one down, two more to go), pre-register at the hospital, pick a pediatrician, get a breast pump, figure out more health insurance stuff, and you know, all that sort of jazz PLUS thinking about holiday stuff. I already asked Alexa to start planning when she will help up decorate our Christmas tree, to get it done before the baby might come. Because I know my arms aren’t going to reach as far as they use to.

I feel like the past two week flew right by. I have a hunch the next 8 weeks will fly right by as well. I will be busy buying Christmas gifts, planning things, and blogging for Vegan MOFO (at least that is the plan XD) I have  a feeling the last four pregnancy posts will be very short. Or maybe not. I guess we will have to just wait and see.