Day 255: Every week I cut and prep my husband’s veggies for the week. It isn’t that I don’t think he gets enough fiber or veggies in his diet, he just simply likes to snack on raw carrot and celery. In fact, I remember getting excited that Jon liked eating celery when we first started dating. I would also buy it and it would go bad since I only liked eating it cooked. I do it usually on Sunday night and get it out of the way. That way it is easy to grab them in the morning and usually takes about 10 minutes total. 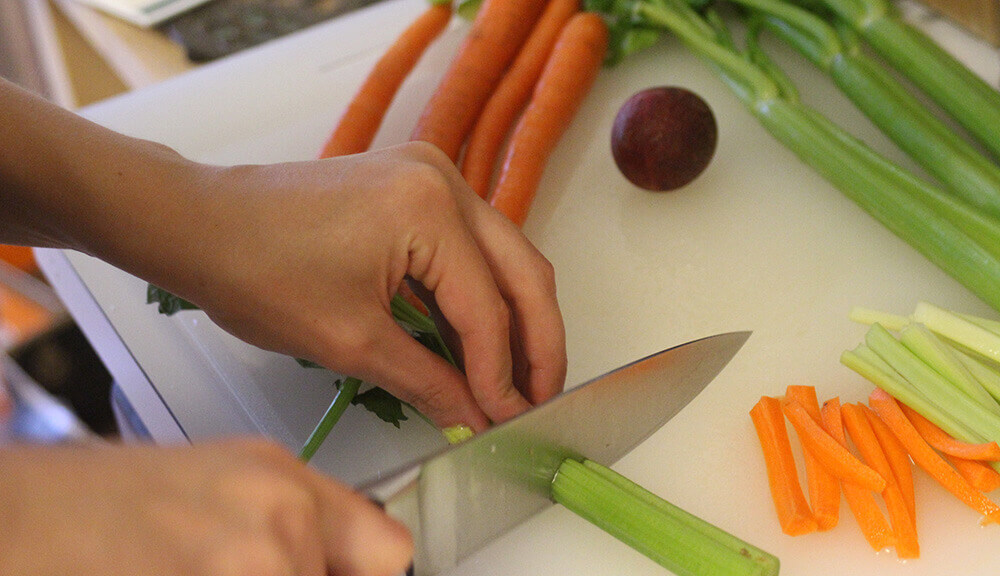 Day 256: Some days I just love boxed orange pasta! I made myself Earth Balance’s vegan mac and cheese. I can’t decide which one is my favorite, but I would have to say Earth Balance and So Delicious, especially the Pizza! I am super excited about the Annie’s vegan pasta that will be coming out. I still have a special place in my heart for the classic Mac and Chreese, but truthfully, they don’t taste like mac and cheese, but I sure do love them. Sadly most stores don’t sell the normal pasta, just the gluten-free. 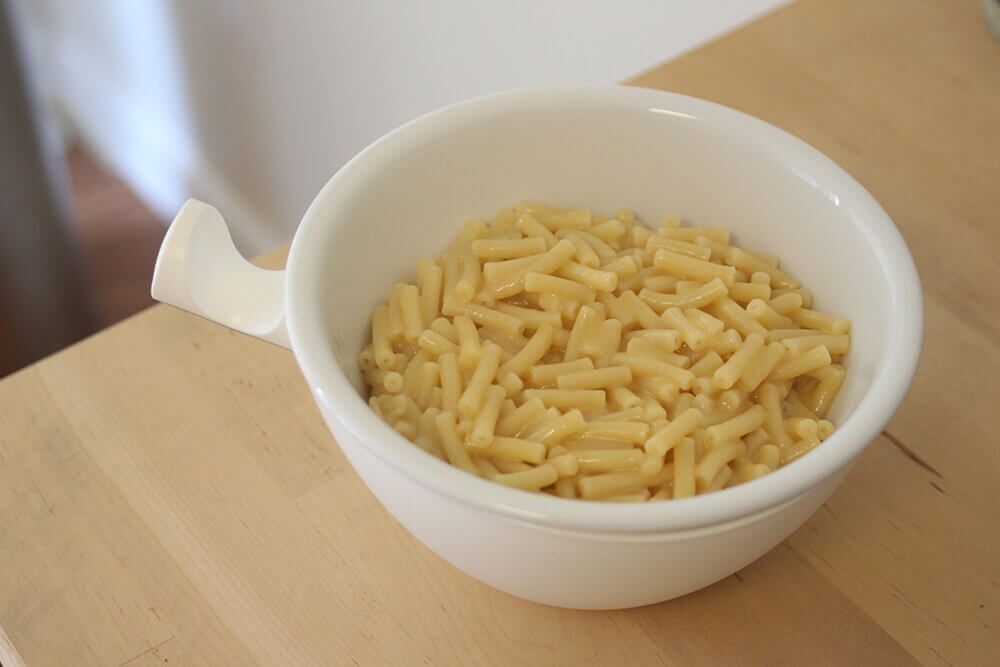 Day 257: Alexa came to visit and we drove an hour to Wildflower, an all vegan restaurant. Their food is super simple and very veggie heavy. Some foods were better than others. Like we got the vegan mint chocolate chip ice cream, which was good, but you could tell they blended up the mint leaves in the ice cream base. I think a steep would leave a nicer texture. But we got a tofu basil wrap, and Alexa got a seitan wrap. 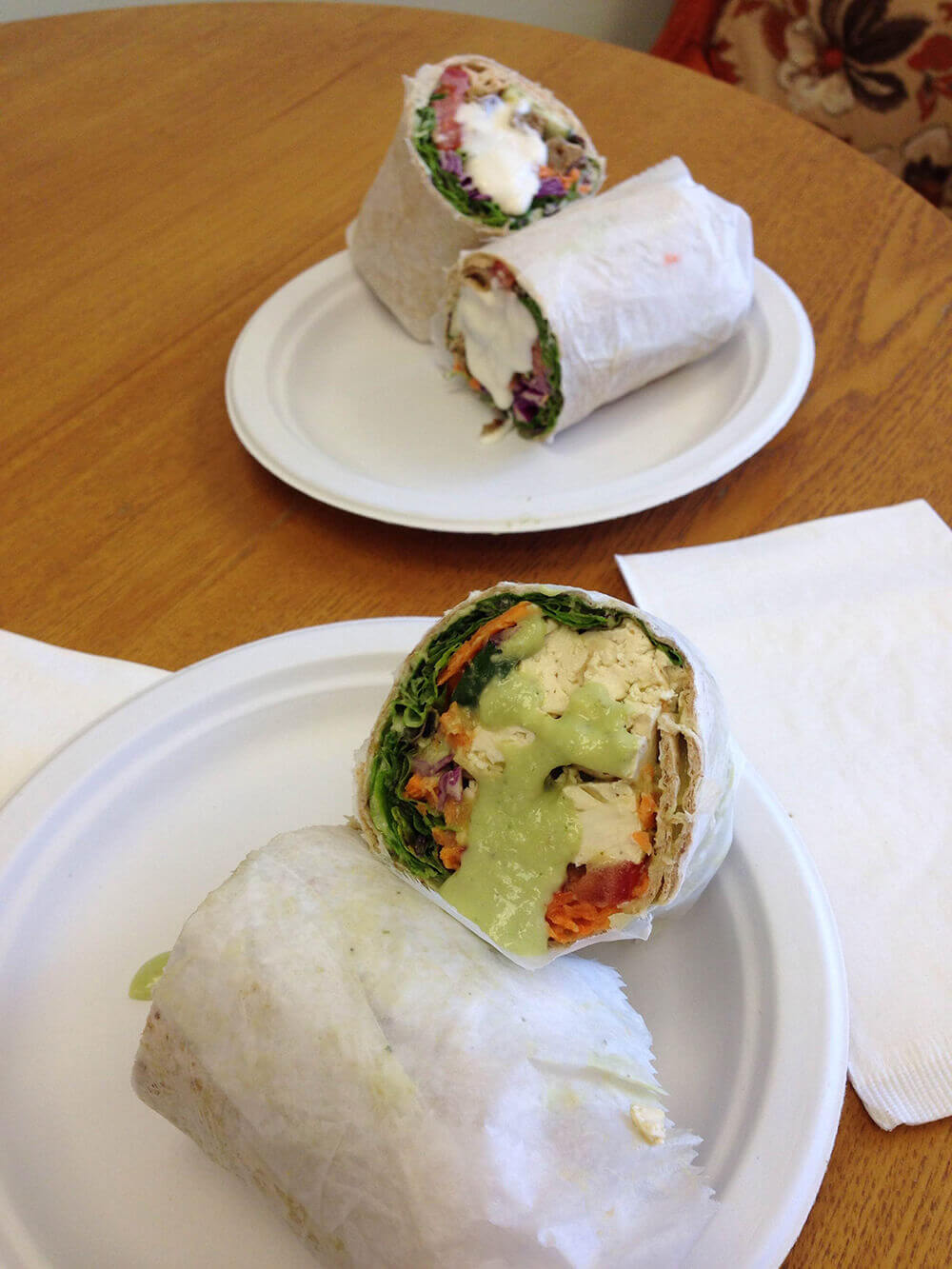 Day 258: I brought leftover beet and carrot soup into work. I use to eat soup all the time, but I find it is a little hard to eat and not get the place messy. So I kind-of stopped doing it, but occasionally it makes sense to bring it in. 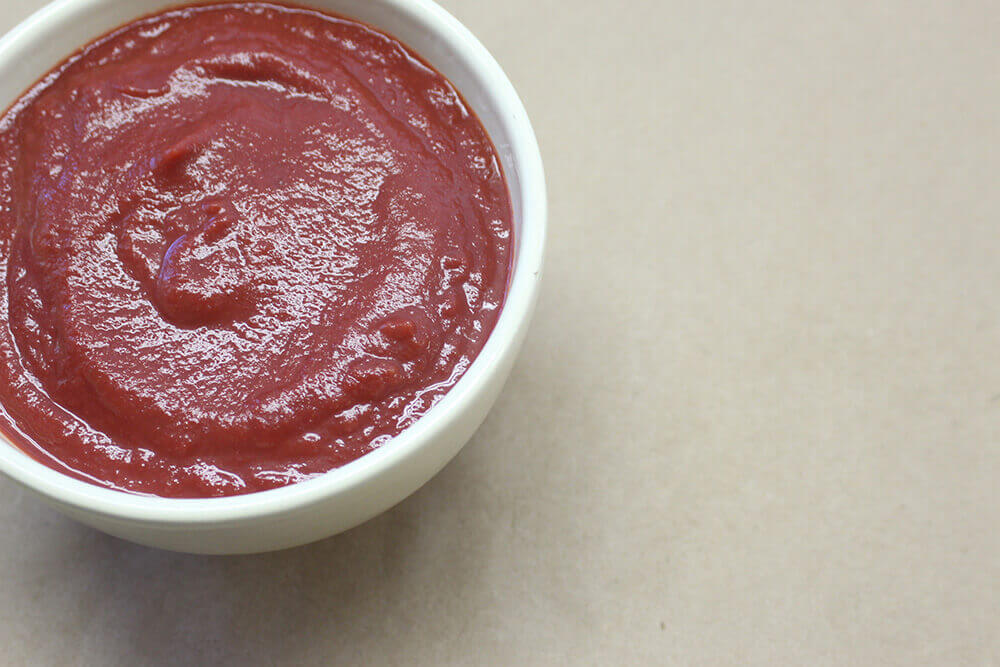 Day 259: This is when I realized photographing my lunches is dangerous. I just get so dang hungry! I kept opting for my camera phone over my SLR. I didn’t want to seem weird to my fairly older bosses, and I just wanted to dig in faster. XD Below is a sandwich with hummus, lettuce, tomatoes, vegan mayo, and some field roast mushroom deli slices. They are great for sandwiches on the go! 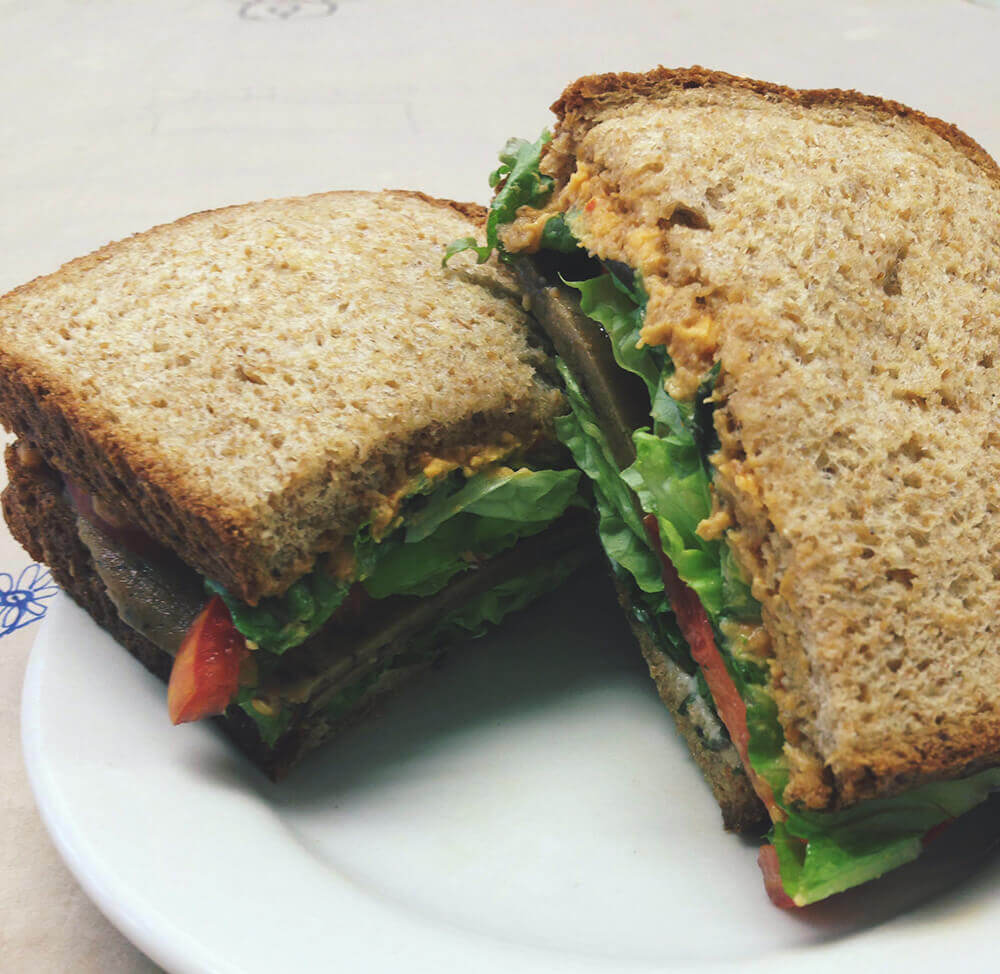 Day 260: Another quick photo day. I never photograph the fruit I eat, so I finally included them. I ate a peach and a plum. In the back is a burrito with white rice, and some leftover curry. What kind? I am not sure of right now. I am thinking a Japanese style curry which is close to a stew. 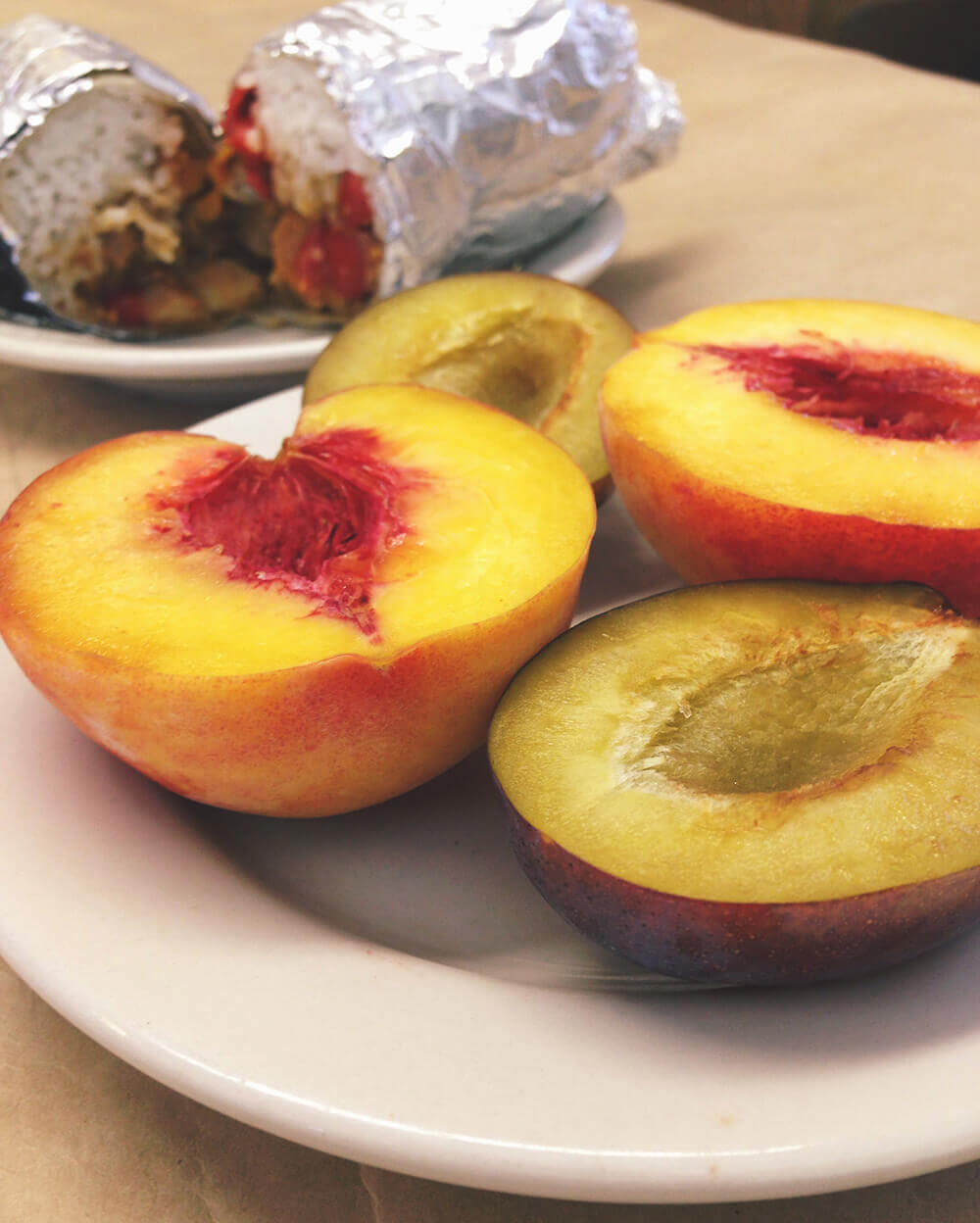 Day 261: I felt boring if I photographed another burrito, so I made a smiley face with my peach and plum. The wrap? It was leftover chili, rice, and lettuce. It was pretty tasty, and eaten cold. 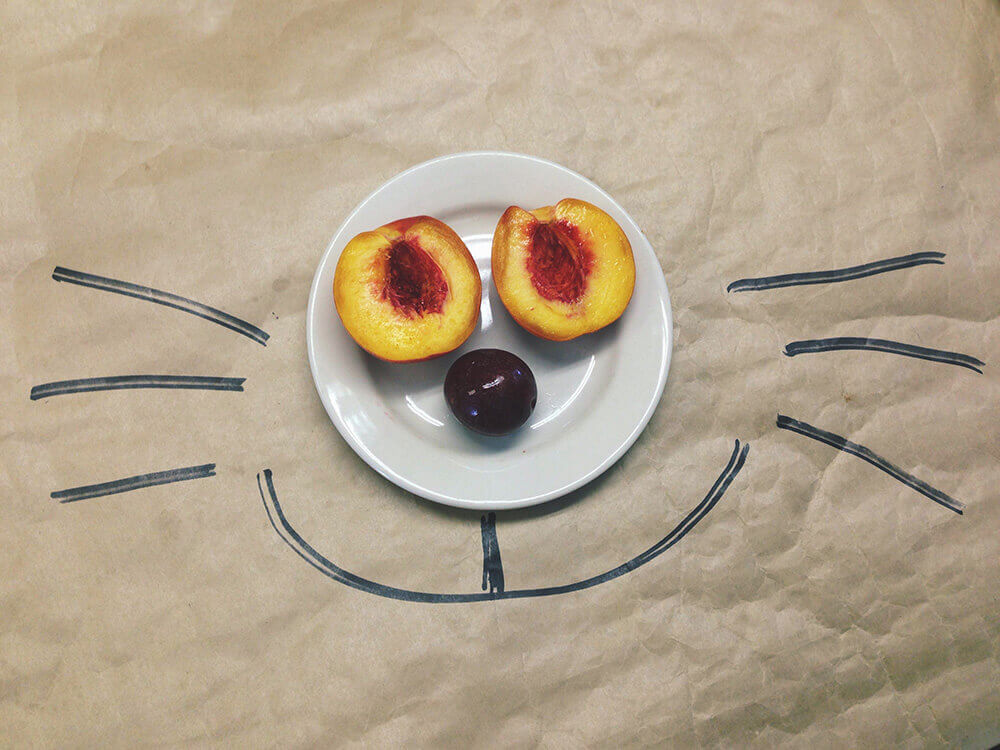