Jenny happened to do one of these posts a little while back – so I thought I would do the same! Seeing as I am a Cartoonist, my list will definitely be more on the Comics end of things, which is great! I am excited to share all of these new stories and artists with you all.

These will be in no particular order as far as which I liked most or least, it’s just a list of some of the things that have been standing out to me when I read them. 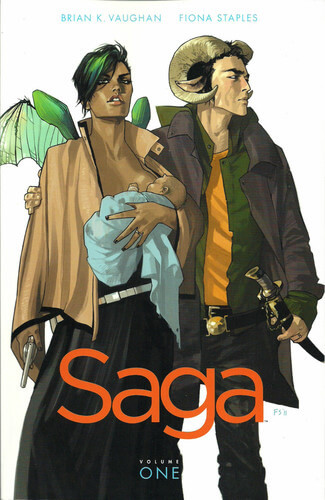 Unfortunately I couldn’t take a physical photo of my copy of “Saga”…it is packed away in a box right now. And volume 2 is waiting to be read!

I had been told many times to pick up this series – and holy cow. Everyone who was recommending it to me was 100% correct. I love it. After the first three pages I was completely enthralled. The art is beautiful and the writing is solid. I am new to Fiona Staples’ artwork, but it is breathtaking! I have been a fan of Vaughn’s writing for a little while, so it’s no surprise to me that I am enjoying this story. 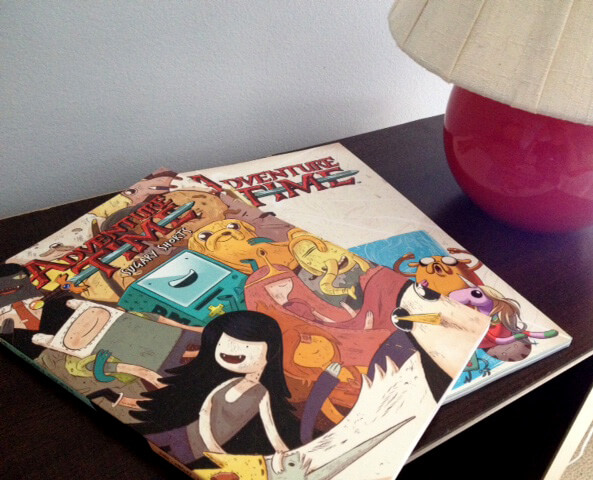 I definitely own more than these two trade paperbacks…but alas, they are also packed away in a box.

I say “Pen Ward” only because BOOM! is putting out so much material originally created by him. Adventure Time has a bunch of sub-series that go along with it as well as Bravest Warriors. It’s a lot. I will say though, each one has it’s own feel they are all well written and incredibly cute. You can’t help but feel as though there is something darker lurking behind each main plot though and that keeps everything really interesting! Another thing I like about the comics is that there are many guest artists who lend their talents to their own interpretations of The Land of Ooo. There are just so many pretty drawings and comic layouts that it makes a girl squeak with happiness! 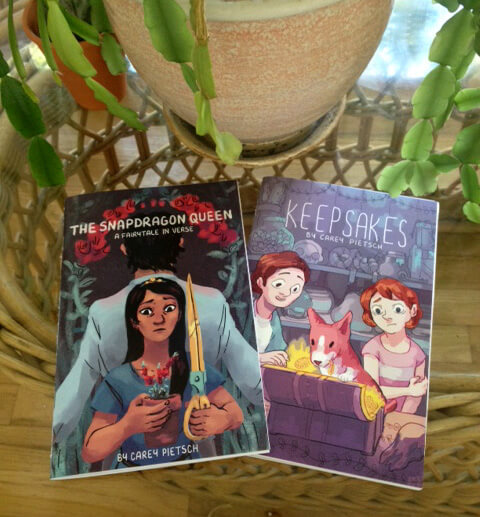 I went to Asbury Park Comic Con for the second time this year, and it did NOT disappoint. I met so many great artists who are trying to/making their way in the comics world! I had the pleasure to meet and speak briefly with Carey Pietsch, who was at the booth for “Drink and Draw Like a Lady”. I read both of these comics in the same day and they are both so lovely in different ways. Her drawings are both sweet as well as refined and suit her writing very well. I couldn’t decide which one to get at first, but ended up getting both because of the way that Carey described them to me…

“Well, one is about a Queen who is just rad and saves people, and the other is a story that you would potentially share with someone who is younger than you and important to you!” Good job Carey! So accurate! And both stories spoke to me on those levels.

“Keepsakes” is only available as a downloadable PDF on Carey’s website for $2, but you can purchase a physical copy  OR PDF of “Snapdragon Queen” on her website as well. I was lucky enough to receive actual copies of both from the convention. 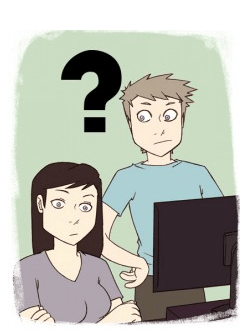 Chaos Life is a GREAT web comic that is written and illustrated by A and K, a married couple living in Ohio with their cute and quirky cats. I have no recollection as to how I found it, but once I read the first few pages I was hooked. The comic itself is wonderful, but the art was definitely what caught my eye at first. A’s style is really cute, but can also be serious when needed and I just  love it. One of the things I like most about web comics (and any comic for that matter) is that you can start from the beginning and see the change in the art style as the story progresses. I liked A’s artwork from the beginning – but it has definitely gotten better as time has gone on.

The comic is mostly auto-biographical, with segments dealing with or explaining A and K’s queer relationship (A is agendered in a female body while K is a cis-gendered woman) or light hearted posts about their kitties. When I read it each week I get the sense that I am actually getting to know the both of them – the writing and drawings help to make both A and K seem genuine and real even though I’ve never met them. I always look forward to checking the website each week to see a new update.